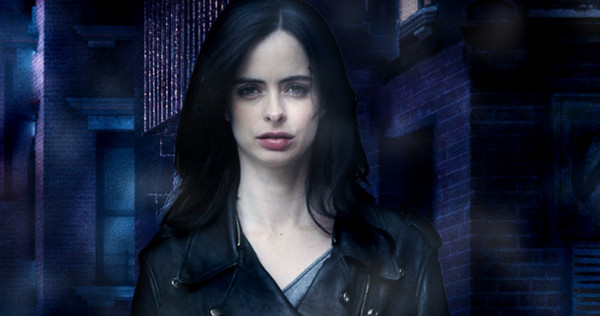 Ugh. I have become snared in, as the scientists call it, “timey-wimey stuff.”

I’m writing this on Saturday to go live on Sunday.  A few days ago, on Thursday, Graeme and I recorded Wait, What? Ep. 190, which will be released on Monday, the day after this post goes live. During that podcast, I spent a lot of time recounting my impressions of Jessica Jones, the 13 episode Marvel show currently streaming on Netflix. Graeme, who hadn’t seen it, asked questions and, being Graeme, told me stuff about the show I didn’t know despite the fact I’d seen it and he hadn’t. By the time we were finished, I felt the show had been very thoroughly discussed.

And then I woke up in the middle of the night and realized I’d left out a huge, and kinda important, talking point about the show.  And it was lengthy enough I just couldn’t drop into the audio during post-production…although we’re pretty big fans of keeping it organic here at Wait, What? and I can’t really imagine doing more than trimming down my endless stammers and Graeme’s constant tsk-ing.

So, behind the jump, are my additional thoughts about Jessica Jones, the 13 episode show currently streaming on Netflix.  If you want to play along with the time travel paradoxes, feel free to read it after Episode 190, so you can experience as it’s intended: as supplemental thoughts to an already existing, yet-to-appear conversation.

(Oh, and full spoilers for the show, by the way!  We’re equally indiscreet in talking about it on the show, too.) 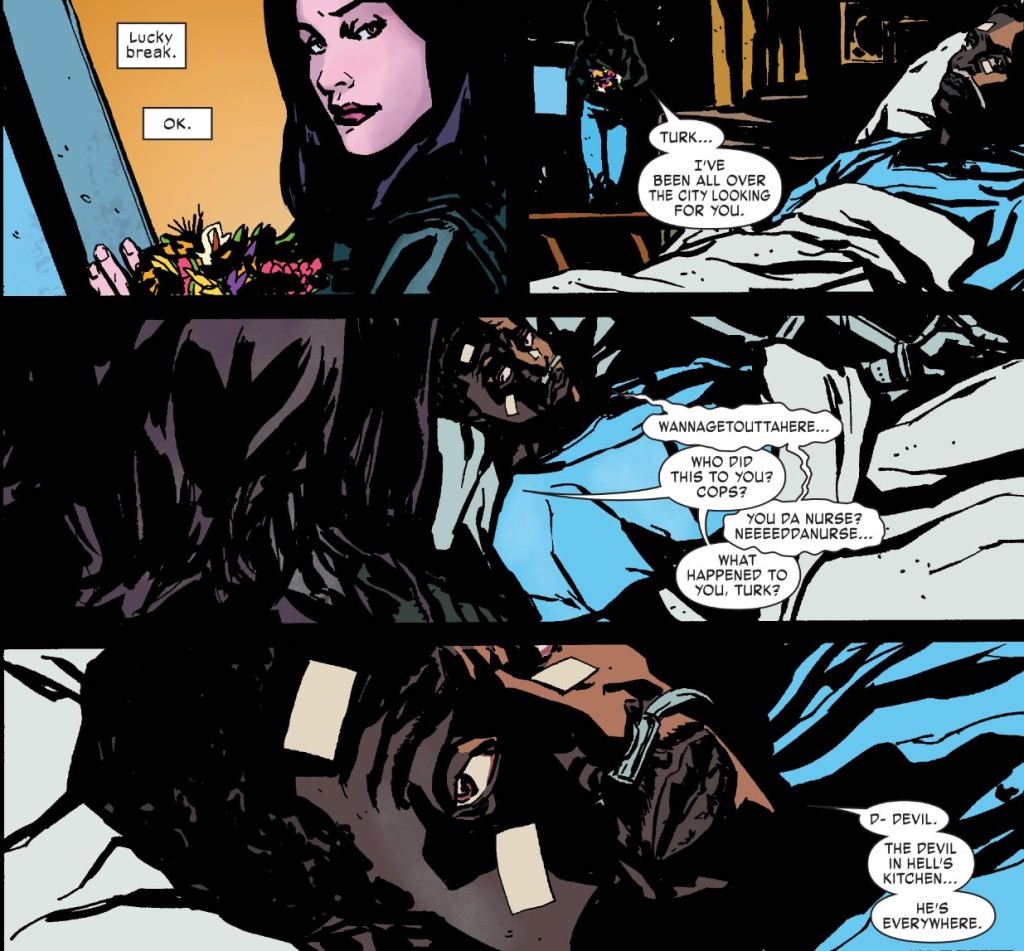 the promo comic isn’t bad but I’m really, really glad it’s not what the show turned out to be…

So, yeah.  Jessica Jones was a really odd experience for me because I ended up watching all the episodes and kinda/sorta enjoyed it despite finding fault with just about everything:  Krysten Ritter’s performance was so one-note it became terrible; scenes were infested with genuinely awful writing; the opening credit sequence looked like it was put together for forty bucks during a weekend where the designer also had to help their parents move; the connection to Rosario Dawson’s Claire Temple (whatever Marvel is paying her, they are not paying her enough) was slapdash and unconvincing; the direction was, for the most part, spectacularly lackluster.  Even odder for me was seeing a lot of people I follow and respect on Twitter referring to the show was thoroughly excellent, an opinion mirrored in the (admittedly few) media think pieces I checked out afterward.

As I told Graeme, what kept me going was the premise: despite all the “hey, Jessica Jones tried to be a superhero and failed, and now she’s an alcoholic private eye with superpowers” promotion, the vast majority of the show is an ongoing battle between Jessica vs. Killgrave, with an impressive ton of collateral damage as the people around them get dragged into the fight. Ever since my pre-teen days, when I made the jump from comics to Stephen King novels via Salem’s Lot, I’ve always had a soft spot for “regular folks versus a nearly omnipotent evil” stories and I found Jessica Jones the most satisfying when the show figured out new encounters for Jessica and Killgrave, each with a desperate plan to finally triumph over the other.

It also helps that although David Tennant’s  Killgrave starts off pretty poorly, with a lot of hollering and gnashing of teeth, the show gives the character—and Tennant’s performance—somewhere to go.  (Part of what made Ritter’s performance so awful to me is how the character is just as yell-y, weepy, snarky, shitty and crabby in the last episode as the first, with Ritter delivering her lines exactly the same way all the way through.  It’s such unimaginative, nuance-free acting I think less of the directors, writers, and showrunner for not being able to help her modulate it.)  And even if the show never develops Killgrave’s power of mind control to Light Yagami levels of complexity, there are still plenty of satisfyingly creepy moments.

So this, I told Graeme, was the great hook for Jessica Jones that kept me coming back despite my annoyance. And then we moved on to other stuff, and the case was closed.

And then I woke up and wanted to kick myself for not even mentioning the other hook, the really important one, the one I think is so strong that a lot of people are giving Jessica Jones a pass a show of similar quality wouldn’t necessarily get.

It’s related to the first hook, which I’d like to say is why I forgot. (But it’s probably not.) 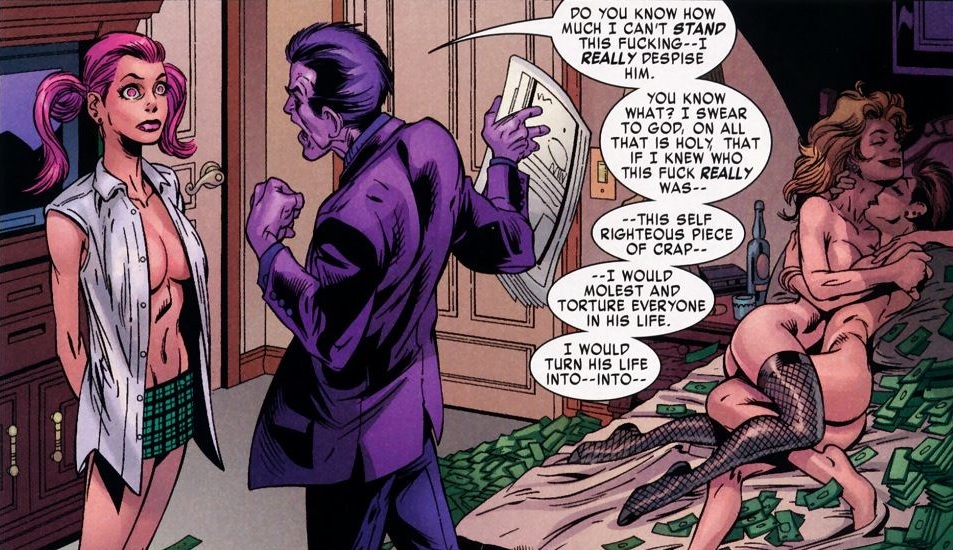 In Killgrave, Jessica Jones has a perfect metaphor for how male privilege leads to violence and sexual abuse and it never loses sight of it.  Although I read Alias years and years ago, I don’t remember any of it except that the final Killgrave arc was by far the most satisfying part of the series.

It’s to showrunner Melissa Rosenberg’s considerable credit she saw the what Brian Bendis and Michael Gaydos were doing with that story and developed it to its fullest. The time where Killgrave had Jessica under his control and used her physically, mentally, and emotionally, works as metaphor for rape, it works as a metaphor for abusive relationships, and, in an era where social media allows anonymous men to hunt, hound, objectify, and terrorize women, Killgrave’s horrific acting out of his fixation on Jessica feels perfectly of the moment.

And yet—and this is probably the best part—Jessica, even while victimized, is not a victim.  In the first episode, she has the instinct and the opportunity to run but instead she stays and fights.  Because she already has her superpowers at the start and the trauma with Killgrave is in the past by the time the show starts, the standard “rape victim gets raped, trains to get the tools to take revenge, takes revenge” arc of exploitation movies (which are by and large male fantasies, even as they channel a need to identify with the women they’re exploiting) is absent.  And because Jessica has superpowers, her fight with Killgrave isn’t a cautionary tale, it’s a power fantasy in the best sense and for the best reasons, giving it such a larger opportunity for catharsis:  I genuinely believe the show couldn’t have gone to some of its more disturbing places if Jessica didn’t have super powers to keep things from descending into unwatchable bathos.

But also: Killgrave.  The show toys a lot with with our empathy by showing us how Killgrave, like a lot of dudes of privilege in this patriarchal society,  was made this way and is sometimes unable to tell when his power makes people react the way he wants, as opposed to doing it because they like him. But, like the show, Killgrave also deliberately toys with this idea, usiing it in order to get what he wants, and to repeatedly and continuously deny responsibility for his own actions.  Any time he gets a chance to use or exploit his power, he takes it…and it’s usually women and people of color who suffer horribly for it.

Although I acknowledge how this concept is muted by the many parallels the show draws between Killgrave and Carrie Ann Moss’s Jeri Hogarth—another exploitative, potentially sociopathic character—I feel it’s also reinforced by Will Simpson, the only other major white male on the show. Like Killgrave, Simpson is driven to do what he desires (which I guess is why he’s called will?) and, like Killgrave, he kills innocent people of color. White guys destroy.  Out of all the many messages in Jessica Jones, this was the one I found most resonant.

That’s what I forgot to say in all the many things I said to Graeme.  Rosenberg and her team have crafted a superhero story that works as a way to discuss larger, more relevant issues, while also allowing the viewer to enjoy some satisfying superpowered punch & kick.  That’s tremendous.  This is why I was so frustrated by all the show’s shoddiness, and especially Ritter’s commited, but unimaginative, performance.  It’s not that I wanted to love Jessica Jones and didn’t: it’s that I was loving it….when I wasn’t hating it.

11 comments on “After The Fact Clarification Before The Fact: Jeff Has More to Say About Jessica Jones”