I had promised myself that I was going to stick to Marvel Unlimited to read the Star Wars books (as described in nauseating detail here), but then I was in Orlando for wayyyyyyyyyy too long and there was this Black Friday sale and I was really intrigued by the Vader Down crossover so I totally caved. Basically, I have no willpower and am the opposite of a Green Lantern.

But I do have thoughts on the book to share with you, so at least there’s that! 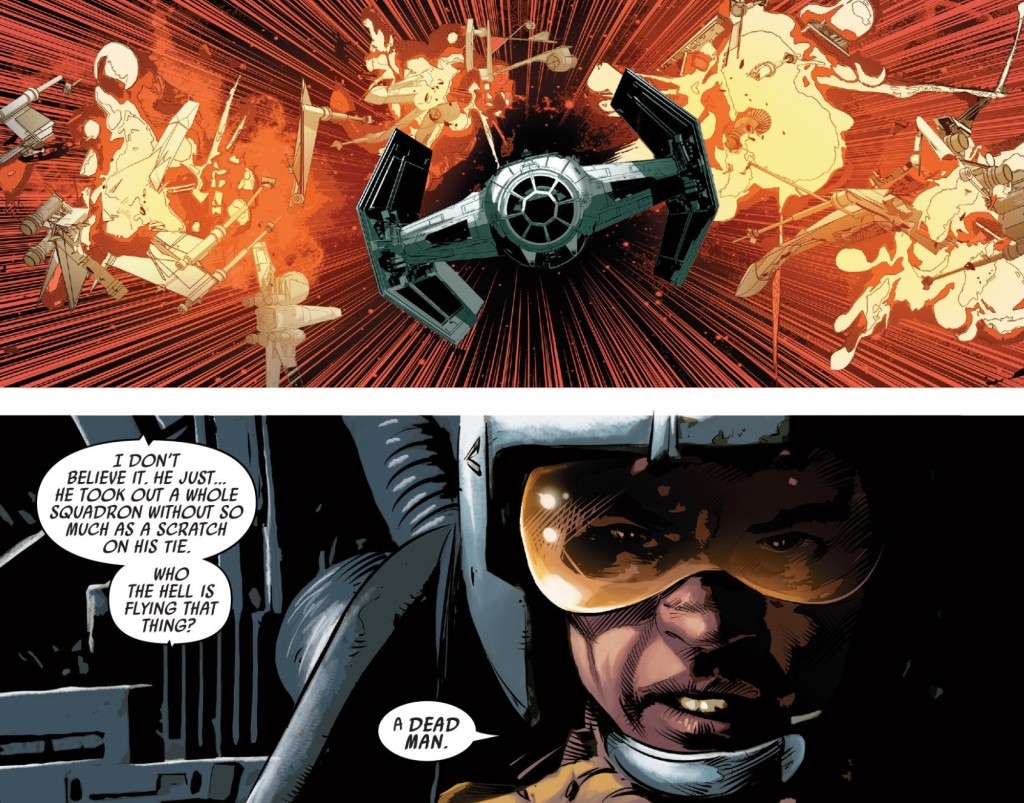 Darth Vader used to scare the hell out of me. I’m right in the Star Wars-as-formative-life-experience demographic (I used to watch a crappy bootlegged VHS tape of it as a kid and still remember which dialogue was obscured by bursts of static), and the scene where Vader makes his entrance onto the Blockade Runner through the smoke and the blown-out door was genuinely frightening.

Admittedly, I was 6 at the time.

Because here’s the weird thing about Darth Vader in the original Star Wars trilogy: he kinda never actually does anything that’s really that bad.

Sure, he Force-chokes the occasional dude, but they’re almost always other Imperials. Sure, he kills Obi-Wan Kenobi, but Kenobi pretty much sacrifices himself and anyway it’s all to facilitate Luke’s Hero’s Journey so it doesn’t count.

The prequels attempt to rectify this problem by having a pre-Vader Anakin literally slaughter a temple full of children, but it happens off-camera, and anyway it’s really hard to take anything about the prequels seriously.

The first issue of current Marvel Star Wars series actually plays with this concept a little bit, introducing Vader in a full-page splash  walking through massed ranks of Stormtroopers, which feels familiar and safe … and which makes it all the more jarring a couple of pages later when Vader casually Force-lifts two of those Stormtroopers to absorb blaster fire intended for him.

But ultimately it’s another pretty safe fight. Vader gets to seem powerful and dominating in battle, but the real good guys get to escape pretty much unscathed. (The fact that they have to stay alive to make it to the second and third movies just adds another layer of safety to the whole proceedings, and makes Vader seem just a little bit more impotent and useless.)

Vader Down appears to be very consciously positioned to solve this problem in one stroke, adding some overt violence to support Vader’s omnipresent air of menace.

The plot is pretty simple–Vader, continuing to pursue Luke Skywalker (a storyline continued from his solo book), stumbles into a Rebel training exercise and winds up shot down on a planet that is empty–save for a Rebel refueling base, and an ancient Jedi temple. So it all comes down to the execution. 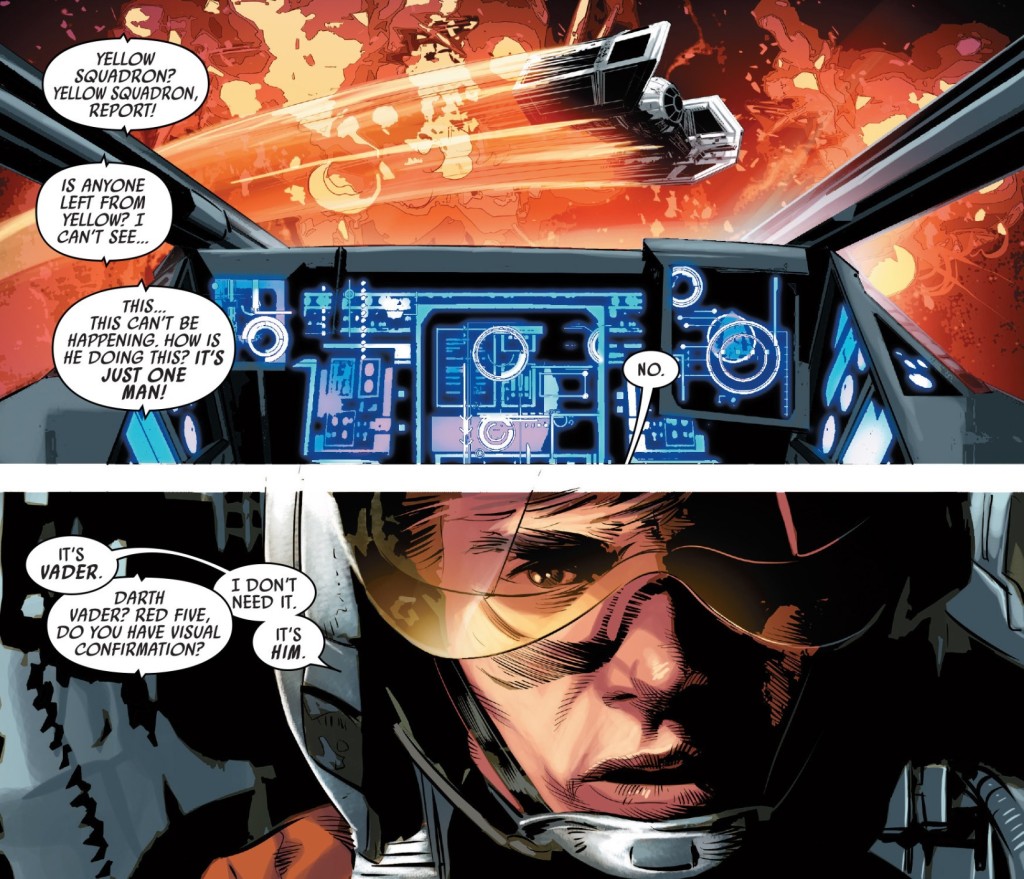 The crossover is plotted by Vader writer Kieron Gillen and Star Wars writer Jason Aaron and weaves through their books, with Aaron writing the introductory one-shot. Among his other talents, Aaron has repeatedly demonstrated the ability to do a credible Garth Ennis impersonation, and that’s what he breaks out here:

It’s Vader as the Saint of Killers from Preacher, just slaughtering his way through hapless cannon fodder, and it’s Star Wars written as an actual war comic (which is surprisingly rare, given the title). And, at least for this one-shot, it’s really effective.

The art comes from Mike Deodato, and the penchant in his recent work for heavy photo-referencing and “widescreen” aspect ratio panels serves this story well and fits in with the general look and feel of Marvel’s current Star Wars line. In fact, he handles the facial acting and the interstellar dogfights with a little more fluidity than some of the other artists they’ve turned to.

(Sure, there are a lot of cuts between upshot-of-pilot and action-outside-the-ship, but even that feel true to the movies, and not nearly as annoying as you might guess just looking at the out-of-context excerpts in this post.)

So I left the opening issue on a high note, feeling enthusiastic enough to go ahead and pay full price for the next two books in the crossover (Star Wars #13 and Darth Vader #13), and … I’m not sure it’s quite sustaining for me. Tonally, it’s all over the goddamned place, which feels very true to the movies, but maybe not in the best way.

(Han Solo has a comedic takedown of an opponent that’s even more cringe-inducing than his “Boba Fett?!? WHERE??!!?” moment in Jedi, and there’s an extended conversation-and-battle between astromech droids that’s genuinely funny and totes adorbz, but kind of at odds with the “My god, we’ve lost so many men” dead-bodies-floating-in-space Saving Private Skywalker of the one-shot.) 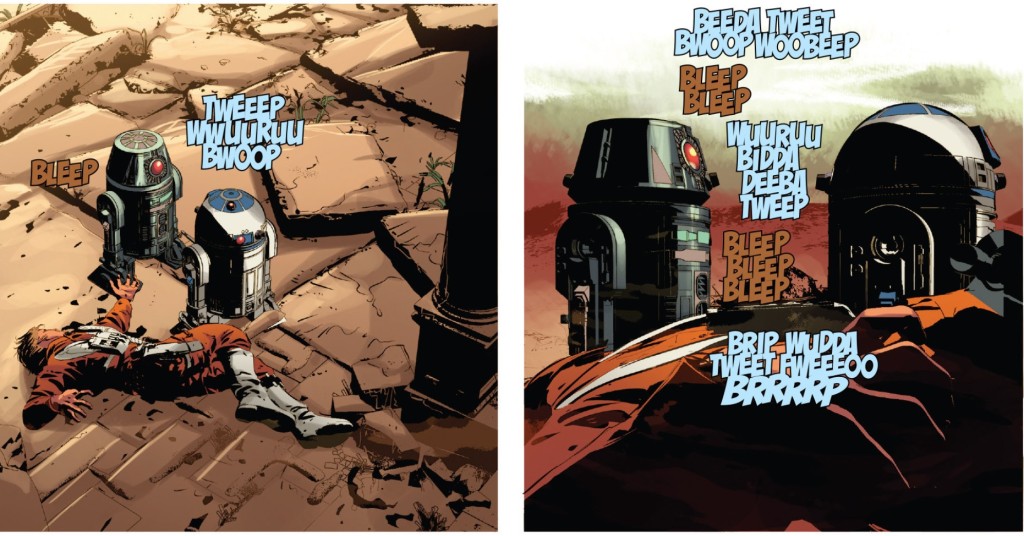 On the plus side, the crossover agreeably continues to move the plots from the individual books forward, rather than putting all the characters and situations completely on hold while the event plays out. And it’s a fairly tight, contained event, with a highly talented creative team. There’s a lot to like here, despite my reservations about parts 2 and 3.

Still, if I were smart, I’d probably wait for Marvel Unlimited for the rest. If I were patient, I’d wait for the inevitable Comixology sale to accompany the new movie’s release in December.

But I’m the kind of idiot who bought a one-shot just because I was restless on a family vacation in Orlando, so I think we all know how this is going to wind up. 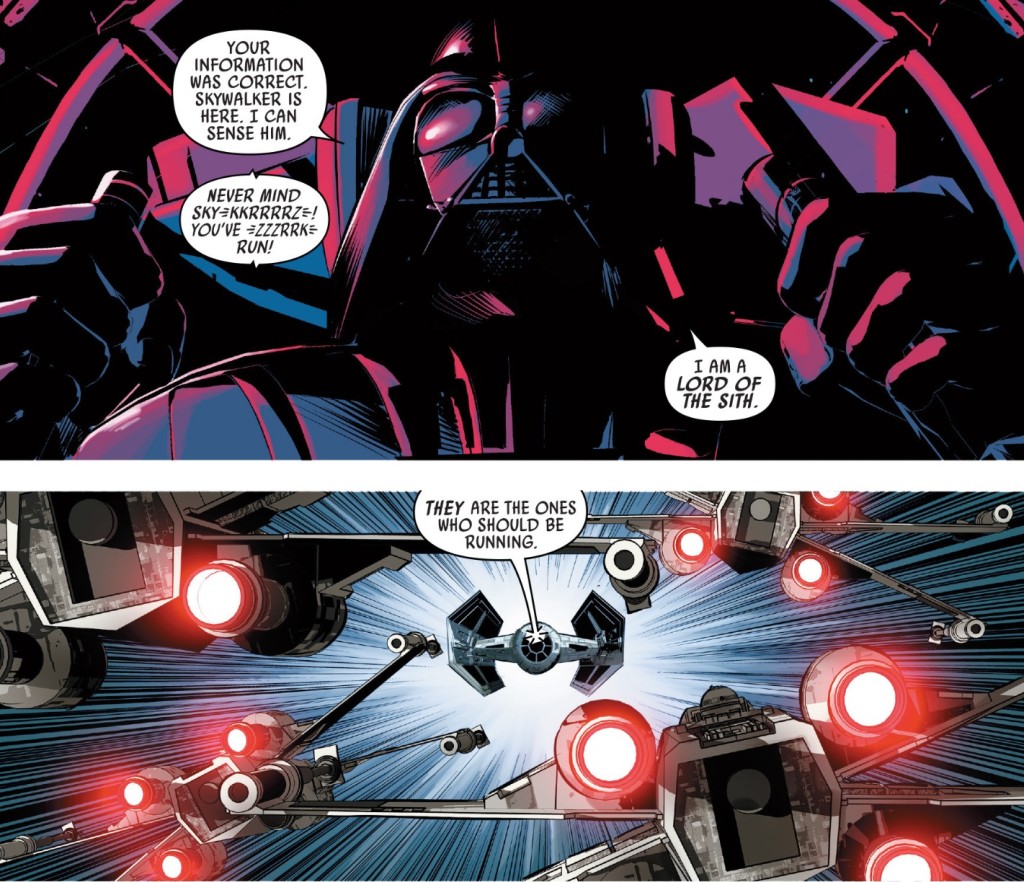