I’ve been thinking a lot about Garth Ennis lately, mostly as a result of writing like eleven billion words about him for our Preacher Roundtable. If there was one thing I took away from that roundtable, it was the mark Ennis’s comics had left on my brain was much larger than the comics themselves probably–after closer review–deserved. So it was fascinating to coincidentally see a creative team wrestling with that exact same issue. Thanks to a sale on Comixology, I bought and re-read Jason Aaron and Steve Dillon’s PunisherMax run. (I know I read it as it was coming out, but I don’t think I ever reread it in what Graeme calls “a oner” and the issues are somewhere in storage or a donation bin now, so this wasn’t a completely idiotic re-purchase.)

The takeaway from this media consumption is boiled down to a kinda listicle thing below, because I’ve been messing around with the ideas in this post for WAY longer than makes sense and can’t seem to get them to fully cohere. There are also SPOILERS for the full run, if that bothers you. 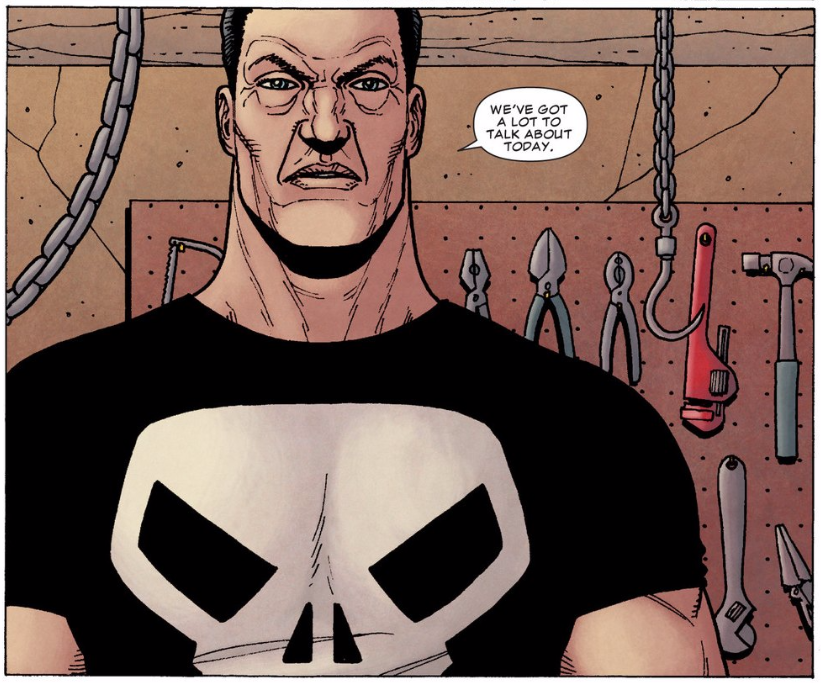 1) PunisherMax is a weird beast. Garth Ennis had a few iterations of his runs on the Punisher, you might remember. The first was Ennis in his cartoony mode working with longtime collaborator Steve Dillon on art, and featured a Very Marvel Frank Castle, something of a cross between Death Wish and Looney Tunes. The second was an extension of that version, but you could feel Ennis getting tired of the whole conceit pretty quickly, and what results are some his worst work for Marvel. The third was the first time the title moved over to the mature readers Max imprint, and Ennis took the opportunity to excise nearly all humor from the title. Castle moved out of his superhero suit and into more “realistic” clothes; he started officially having aged in real time since Vietnam; and the self-consciously grittier artists swapped in for Dillon turned Castle into a hulking Frank Miller force of nature.

The result is a series of revenge dramas, thoroughly reviewed by Jeff here. For this series, Jason Aaron steps in for Ennis and tries to somehow bring the Max series of stories to a cohesive end while simultaneously introducing Max versions of a bunch of Marvel characters. And Dillon returns to handle the art, making the whole thing feel like an insane melding of the initial Ennis/Dillon run and the later more serious Max stuff.

2) Aaron is part of the reason I’ve cooled on Ennis. Jason Aaron’s work is pretty clearly influenced by Ennis’s 1990’s output. He works similar tones of macho action, deadpan comedy, and grindhouse ultraviolence, but he’s much more at ease in a shared superhero universe, and much less fixated on exploring the true glory of war or the bonds of brotherhood between killers or whatever. In his Marvel work, he takes Ennis’s approach, distills it to its essence, and then adds a more light-hearted dose of superhero absurdity.  Given where my head is at in reading these types of books lately, this suits my tastes much better than Ennis himself does. (Aaron’s creator-owned stuff tends to take itself slightly more seriously, which may be why it doesn’t always resonate as well with me.)

3) That said, there’s a mismatch here. Aaron wants to tell the final Punisher story. The Max iteration of the character is a great place for that — because of the real-time aging, his longevity is inherently limited (just like all of us, mannnnnnn!) — but doing an ending, especially with that version of the character, should probably carry some weight. There’s a reason Dark Knight Returns adopts its self-conscious self-serious tone throughout, y’know? And Aaron sometimes really goes for it on the dark-and-dreary spectrum. His Kingpin origin is almost painfully bleak, and he builds to a pretty grim expansion of Castle’s origin as well … and yet somehow he also undercuts it all with characters like The Mennonite (he’s a hitman, but more like a character out Weird Al’s “Amish Paradise” video!) or the goon who has his eyes popped gruesomely out of his head and jams them back in crosseyed.

Aaron’s clearly trying to do exactly what I praised him for in the last item, bringing some weirdness to the grimdark, but it just sits impossibly strangely together–the comedy undermining the attempts at closure and psychological revelation for the characters, but the shear nihilism of the story making it tough to read as a straight Tarantino-esque caper. 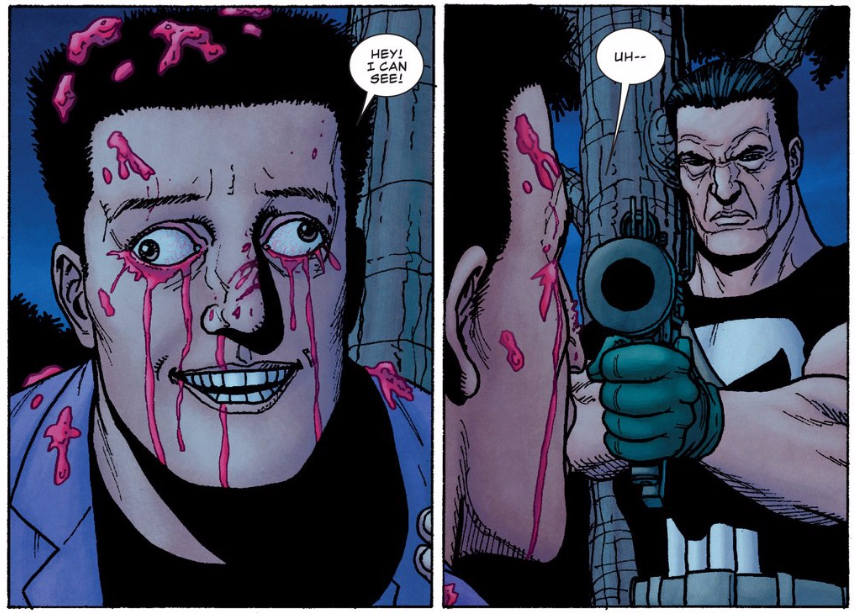 4) Dillon is at least partially at fault. Not because there’s anything wrong with his art–Dillon is nothing if not reliable, among the cleanest and clearest comic-book storytellers–but his stint on the Looney Tunes Marvel Knight Punisher book enhances the association with goofiness every time one of these weird, off-the-wall characters or incidents pops up. “At fault” is probably totally the wrong phrase, but if Dillon weren’t drawing these issues, some of the dissonance might be mitigated. 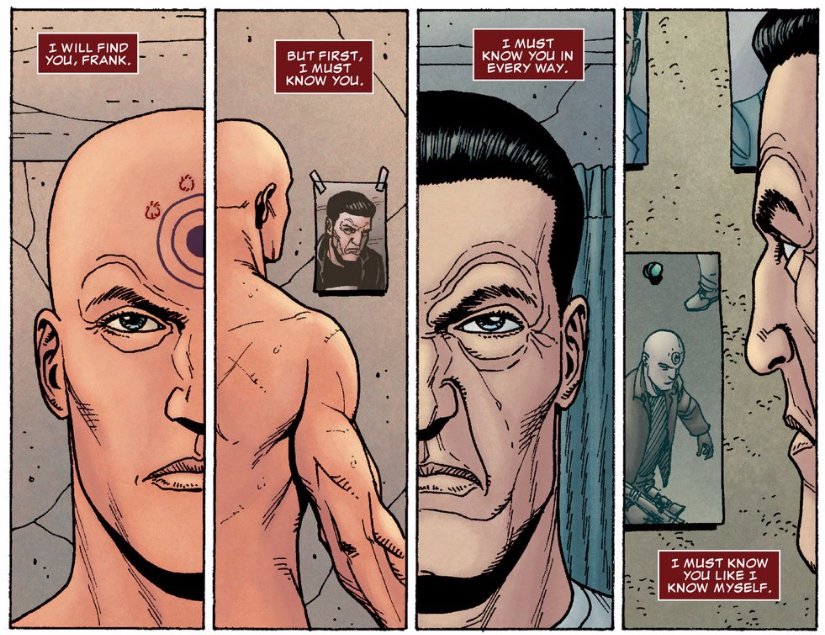 5) Aaron makes this tension metatextual midway through. I have a habit of seeing metatextuality everywhere (I laughed like an idiot when The Force Awakens literally opens with a guy with grey hair and a grey beard handing intellectual property over to a younger, more charismatic fella while saying “This will begin to make things right”), so this mayyyyyyyyyyyyy be a reach. But when Aaron introduces Bullseye to the story, he strips off most of what makes the character familiar (the playing cards, the throwing skills, the cool uniform) and instead turns him into a gun for hire who need to understand what makes the Punisher tick in order to kill him. So he sleeps in Frank Castle’s deserted hideouts, and eventually starts inserting himself into “families” which are he then has wiped out on picnics–because he just can’t quite figure out why Castle does what he does. This culminates in the aforementioned expansion of the Punisher’s origin, and what the whole thing feels like is Aaron putting on paper his own difficulties getting to the heart of Ennis’s incarnation of the character.

6) The whole thing winds up weaker than it should. There are some genuinely great moments in this series, and to a certain extent it achieves its goal of ty 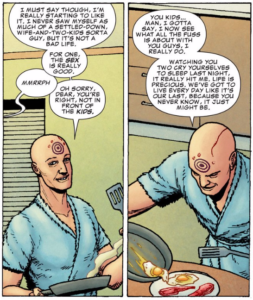 ing off the Ennis Punisher’s arc. But there’s also some severe missteps, including some moments of genuine terror that seem to be played for laughs. ( For example, Bullseye’s open admission that he’s been having sex with the “wives” in his “families” is creepy beyond all measure, and a needless bit of sexual ugliness in a book that already seems to be wrestling with its ability to be explicit.) The Kingpin is well-crafted–the Netflix version immortalized by Vincent D’Onofrio owes a little bit to this iteration–but Elektra is a non-starter, and the revelations about Castle’s origin don’t live up to their build-up.

7) In the end, I think this series boils down to one thing: Aaron could follow Ennis on either version of his Punisher, but this attempt to follow them both at once is more than even he can pull off.