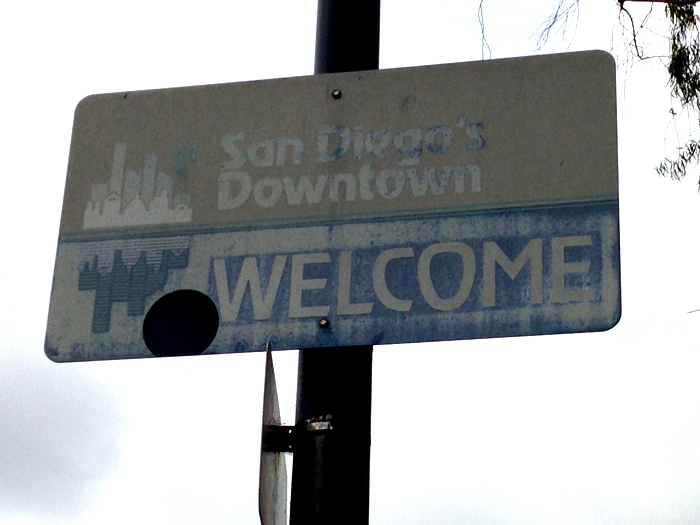 I said on the podcast at one point that I had the idea that I’d keep a diary of San Diego Comic-Con this year, and that I’d post that here on the site afterwards as some kind of As It Happened expose and tell-all of my experience. That plan was utterly derailed by the events of my very first night there, but even if it hadn’t been, I’m sure it would’ve fallen apart the next night, or the night after that, perhaps; it was a trip that, even though it didn’t include my working all through the night at any point (In large part because most of my work was done right there, at the con, because of what was required of me), nonetheless featured late nights and each evening, I was exhausted and not in a mood to write about what was going on.

That makes it sound like I was in some kind of grumpy, horrible mood, and nothing could be further from the truth; it was one of the stranger, and at times, most stressful Comic-Cons I’d attended, but also one in which I met a whole host of people I’d only ever known online in person for the first time, and every single one was great, weirdly re-affirming a faith in comic folk (and movie folk, and publicity folk and… fuck it, let’s just say “folk” in general) that I wasn’t even really sure I’d had in the first place. It was also a trip that let me see a bunch of people I don’t get to see enough as-is — you know who you are — and that was worth any price of admission, no matter how ridiculous. And, really, things got pretty fucking ridiculous at times.

For example: what if, when going through airport security, you got pulled aside because somehow your crotch looked suspicious in the x-ray machine? Because that happened. Or checking in to your hotel, only to find out that your reservation didn’t actually exist anymore, and by the way, the available rooms in the hotel were now almost three times the cost you’d previously thought you were paying? That happened, too. (Wednesday, as you might have realized by this point, was a very surreal day for me.)

The panel I was on — a retrospective of Marvel’s Ultimate Universe, with Vulture‘s Abraham Reisman and The Beat‘s Heidi Macdonald, jumping off of Abraham’s great piece from a couple months ago — was ridiculous, too, but in the best way; it felt like the three of us just having a snarky conversation, and suddenly we were getting the 5 minute warning for the whole thing to be over, and yet, people seemed to like it…? It was stupidly fun, and the closest I’ve ever gotten to Wait, What? as a panel; it made me want to do a panel with Abraham whenever possible. (Or, for that matter, get Abraham on the podcast sometime. Hmmm.) 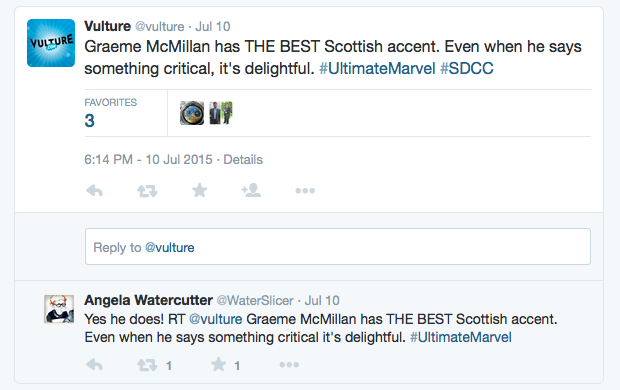 What else? Random celebrity encounters, because it’s Comic-Con. Having to run from one end of the Convention Center to another to get a press pass for a panel in Hall H, only to then be told by a volunteer that I can’t use said pass because my badge didn’t say “Press” on it, only for that volunteer to then be told that special passes trump everything else, all while trying not to panic about the five deadlines hanging over your head, because, yes, it’s Comic-Con. Being crushed in a wave of humanity that cares far too much about what’s happening at the Mattel booth, because it’s Comic-Con. And the gossip…! Man, the gossip. No, I won’t share; loose lips sink careers. But still.

Those who’ve been to SDCC know the weird disconnect from reality that occurs pretty much as soon as you step into the Convention Center for the first time, and continues until — well, I’m typing this on the plane back to Portland, and I still don’t really feel like I’m back in the real world. I was having a conversation with someone this afternoon in which we admitted that neither of us actually knew what was happening in the news at the moment. It was the second time the subject had come up during the week of the show; earlier on, a friend asked, “I was just thinking, what if some big disaster happened in the world and none of us knew anything about it, because we were all at Comic-Con?” That’s what it’s like; being there for the five days is like getting unmoored from reality. The sight of seeing giant Uglydolls wandering around next to faux Thors and an army of Agent Carters becomes entirely normal far faster than is probably healthy, while the regular workweek becomes a distant dream.

(Writing that, I thought, wait, that doesn’t sound bad at all. For all my personal cynicism about the show, I’m reminded of talking to Playboy editor Marc Bernardin, who told me that he went to the show with someone from Playboy who’d never been before, and her awed, amazed reaction made him like everything again. There’s something to be said for not being a cynical, jaded bastard.)

I’m still on this odd high from the whole thing; it’s the adrenaline and the exhaustion mixing, I think — I got nowhere near enough sleep each night, either because my hotel was, it turned out, right below where planes came in to land at the airport, or because I was up late working or socializing (Related: I was out for dinner on Friday, and the entire cast of Star Wars: The Force Awakens was sat behind me; it was one of those Oh, that’s right, the world is weird here moments, but kind of exciting, too) — and I know re-entry into the real world is going to be rough, even after a full night’s sleep. But I find myself thinking, “I’d go back. I can imagine wanting to go back again next year without dread in my heart.” That’s got to be a win, right?