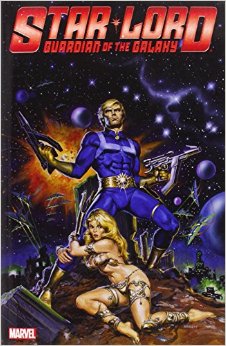 I had these ridiculously open days last week: Graeme was off to SDCC so this was skip week; my Wednesday comic run got pushed back to Thursday night so I could help celebrate Doug Slayton’s birthday; and amazingly enough there were no last minute dental appointments, chiropractor appointments, or other old people upkeep appointments I’d forgotten about (in part, because I double-scheduled a bunch of them for the same Wednesday three weeks from now.)

By which I mean, kinda?  Join me after the jump  for more (although only after you’ve read new contributor Matt Terl’s premiere entry because it’s great.)

Star Lord: Guardian of the Galaxy (Part 1) (of, I dunno, 3 or 5 or something):  Wow, you guys.  So with all that free time, I sat down with the full intention of plowing through this one and checking it off my mighty to-do list.  If only I had captured my confident self-satisfied cackle as I had.

Endless hours later, I groggily pulled myself from the couch and realized I had made it through two stories.  Why?  Well, let me walk you through it.

To start, there’s the origin story of Star-Lord by this site’s unofficial mascot, Steve Englehart (and Steve Gan with inks by Bob McLeod), and there are a few reasons I thought it was great. First and foremost, the universe has a cheeky sense of humor.  The Star-Lord of Englehart’s origin is exactly the kind of Star-Lord you’d imagine created today by someone looking at the superhero movie zeitgeist: driven to avenge the death of his mother at the hands of marauding aliens, Peter Quill is a ruthless bastard who becomes the world’s top astronaut so he can get into space and get payback.

In a way, the origin is like the world’s most hilarious premise for a Batman Elseworlds story–what if Bruce Wayne’s parents had been killed by aliens?–but it’s played super-straight, with Englehart super-intent of showing how much this damages the sensitive young kid Peter Quill is.  Again, it seems much more a product of now, after all our decades of grim and gritty entertainment, than of 1976 (although now that I think about it, Star Wars had a lot to do with bringing the idea of fun back to sci-fi, and it’s still over a year away). 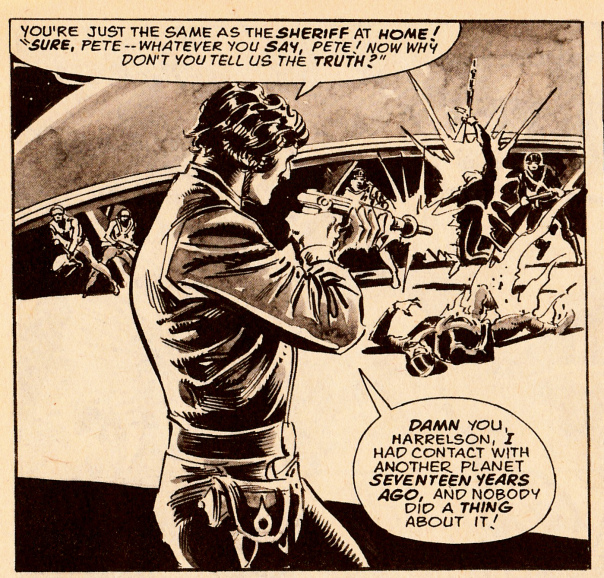 But, instead, one of the charms of Marvel’s Guardians film (and the accompanying re-casting of Star-Lord in the comics) is how today’s Quill is just a big kid in space, strictly Loveable Space Scamp 101 stuff, the sort of thing I feel we had a better shot of getting back in 1976 but didn’t.  Indeed, the introduction by Englehart in Star-Lord’s first appearance, and editor John Warner’s intro in the second, more or less make clear that a lot of people were taken back by what a prick Quill is.  (Maybe even back then, people were hankering for Loveable Space Scamp.)  So, if nothing else, it’s pretty funny seeing Englehart do grim and gritty back then and get the gasface for it, while our current “one out of every four stories must involve an apocalypse or a terrorist attack” gets a Star-Lord who’ll challenge a villain to a dance-off.

Of course, Englehart being Englehart, the ambition doesn’t end there. Quill’s birth gets compared favorably to Jesus, what with a similar alignment of the planets, and in his introduction (and in interviews after), Englehart talks about using his newfound passion for astrology to map out Quill’s destiny.  Hands down, my favorite part of the introduction is where Englehart makes it clear he’s not libeling anyone born at the same time and place as Quill, and thus sharing his same star chart, because Englehart only followed the chart up until 1975, which is pretty much the best comic book disclaimer of all time.  (And the most Seventies disclaimer, which, again, means it’s the best.) 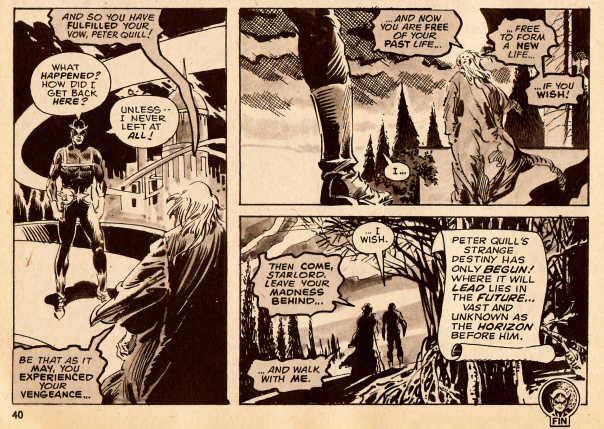 Englehart intended the story of Star Lord to be a space epic in the manner of Hesse or Castaneda, the initiation of a firebrand into higher wisdom, by moving Quill through all the houses of the Zodiac.  Instead, he never got further than placing Quill in the House of Turd—which I’m 98% certain means “Scorpio”—before then himself moving off to greener-seeming pastures.

So that was great.  Seriously.  I don’t know how many issues Englehart was planning to do “SPACE JESUS IS A DICK” but I would’ve gladly bought all of them.  (In fact, if you have an okay artist, I’m 90% certain that and the title SPACE JESUS IS A DICK could get you an Image deal right now.)  No, the problem for me with Star Lord: Guardian of the Galaxy came from a very unexpected source:  Chris Claremont and John Byrne.

That’s right.  For the second appearance of Star Lord, editor John Warner got the team of Claremont and Byrne, right before their historic collaboration on Uncanny X-Men and during what was, for me, their equally historic collaboration on Iron Fist—how I wept to see Marvel’s newly recolored Iron Fist collection in the stores this week, and wept all the harder at that $39.99 price tag!  Claremont and Byrne and inker Terry Austin, the Three Musketeers, crafting a 52 page space epic which John Warner proudly declares to be the realization of his vision, “an original SF novel in a comics format.” 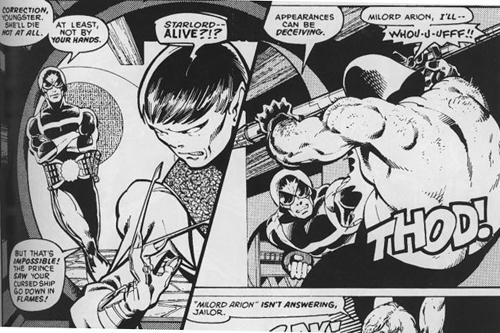 Yes, that’s what killed my reading momentum: Chris and John and Terry doing an science-fiction epic featuring a de-turded Star-Lord, his intelligent female spaceship with a ladyboner for our hero, and two young  nobodies fighting an evil race set first on destroying planets, and then on overthrowing an empire.  In the course of their adventures, Star-Lord uncovers his true origin and finds that not only is he fighting to save a universe, he’s also fighting to avenge his mother’s death… everything modern writers would try and do with a character today: make things personal for the hero, give him skin in the game.  I strongly suspect we’ll see something similar in Guardians of the Galaxy 2: Vol. 2 (a title by the way, which Internet news people seemed to find perfect but which struck me as one hell of a wasted opportunity: if there was ever a sequel movie that could re-play the “[First Movie Title] 2: _____________ Boogaloo” and not only get away with it but be a good tonal match, it’d be Guardians 2).

Unfortunately, I can’t tell you for sure why this story arrived D.O.A. because there are too many fingerprints on the murder weapon.  Thanks to my brothers, I actually had an issue of Byrne’s Space: 1999 in the mid-70s, a great little issue where Martin Landau’s character is stranded in space and has to use his dwindling oxygen to survive, and it’s about as hard sci-fi as it gets.

So it was kind of embarrassing to read this  and realize almost forty years after the fact how clearly Byrne does not dig Claremont’s type of space opera at all.  Maybe I was thrown off by the beginning of Claremont & Byrne’s X-Men run, starting as it did at the conclusion of Claremont’s first enormo-Space Opera Epic, although thinking back on it, it’s notable how (conclusion of Dark Phoenix storyline aside) the X-Men don’t really return to till that field until after Byrne splits. (Holy crap, there’s a great Banana Splits/Byrne-ana Splits pun there I just can’t assemble, damn me.)

Anyway, yeah.  Byrne is definitely not DTF with Claremont’s soft-science epic, or maybe he just got burnt out, because although the layouts start out fun, by the last quarter they are (for the Byrne of the era) dull, the anatomy is a little bit dashed off in places, and the costumes, half the fun of a space epic, are downright moribund:  Claremont’s psychic sea vikings look wear generic tunics, the unstoppable robot warriors of the empire look like animated Roman Centurion uniforms, and the plethora of sniveling villains are incredibly generic (although at least the guy who looks like Count Nebula/Basil Rathbone in Robin Hood is given a Cockrum-ific waist sash for one panel). 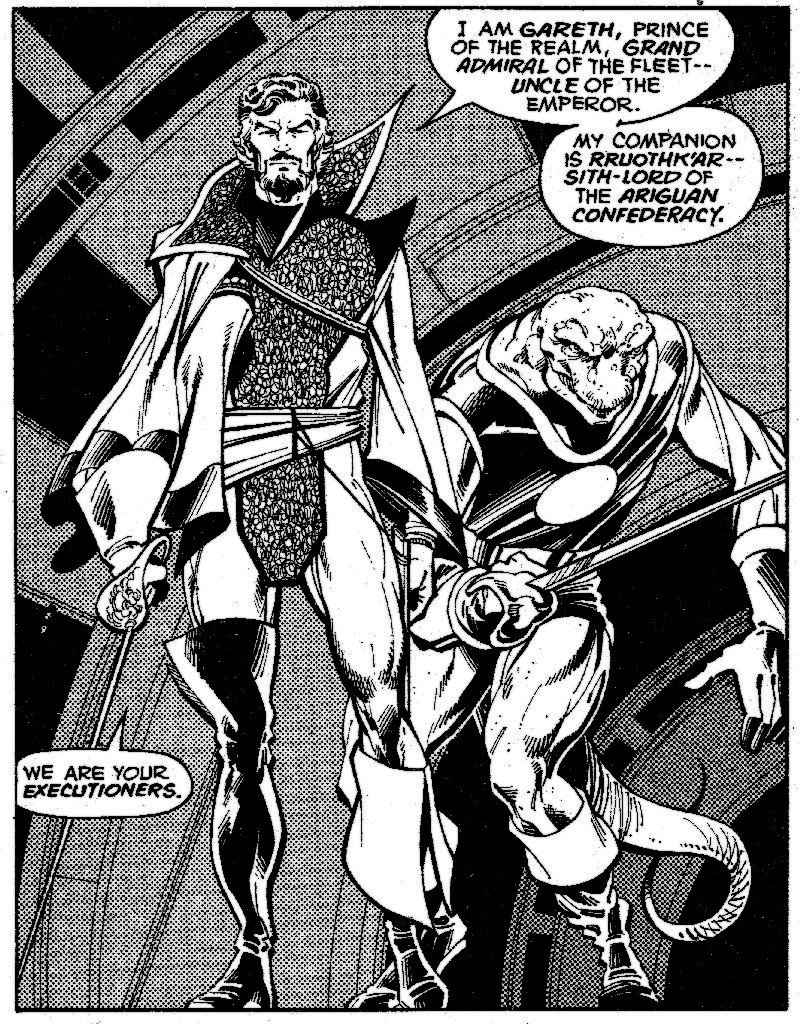 You could’ve gotten the same genericism from the kids of a high school drama department, but at least the kids would’ve brought some energy to the affair. Really, the only thing sparking Byrne’s interest is in the design of Star Lord himself who, with his slim waist, wide lens space goggles, and ultra-tousled hair, looks like if Night Owl from Watchman had posed for a Winston Longs ad from the year 2050.  Sadly, I think Austin’s love of homogeneous line weights only adds to the genericism of the proceedings.

And yet, somehow, Claremont still comes off as the biggest offender.  Considering it’s 1977, the story is amazing as a mini-miscellany of Claremontian obsessions—is the female love interest tough and no-nonsense and also a professional thief? Why, yes she is! Are the phrases “boyo,” laddie,” “m’love,” and some variation on “no quarter is asked, no quarter is given” used? Yup!  Do Star-Lord and the young couple find themselves under the spell of an evil psychic seemingly able to rewrite every aspect of reality, such that they are helpless to know what to believe?  I can’t even believe you’re asking!—and yet incredibly dull on its own.

Claremont cleverly gives  Kip Holme, the young psychic sea viking a desire for cosmic vengeance that mirrors Englehart’s Quill, but Kip isn’t truly a bastard, he’s just hotheaded, and there’s nothing he wants to do Star-Lord wasn’t going to do anyway.  And space thief Sandy (Sandy?  Hope that gambit got you some action, Chris!) shows barely a sliver of personality after freeing Star-Lord and Kip from their alien captors.  The guy’s so devoted to whisking us and the characters through his story, none of the victories or defeat have time to land.  Despite all the Claremont hallmarks that show up,  the most important one–a desire to explore the characters and make you care about them–is absent. Hideously, hideously absent.

And so, upon seeing this story followed up by not one but two more Claremont stories, my will fled from me altogether.  The local library emailed me a notice the other day saying they’ve officially put a bounty on my head so I’ve got to finish this thing up soon.

Will I? Won’t I? I’ll try my best and let you know. If nothing else, I strongly suspect neither Loveable Space Scamp or Dicky Space Jesus will be there to save me.

4 comments on “Update, Up Late: Jeff Starts in on Star Lord: Guardian of the Galaxy”