Housekeeping note: please be sure to scroll down to see posts from Graeme, Jeff, and me again. Truly, this is the age of proliferating production of pontificating and philosophizing in the wacky Wait, What way.

Like all right-thinking human beings, I love Bugs Bunny — arguably one of the most consistent and pure pop culture loves of my life. They are funny in almost exactly the same way now as they were when I was a kid — I haven’t had to adjust my expectations of Bugs, haven’t had to think about what it would mean for Bugs Bunny to be in the real world, haven’t read people’s grim and gritty tellings of his eventual end. He’s a funny trickster rabbit, and even if I focus on different specific gags, the basic charm remains exactly the same.

So does the perfectionism. These are cartoons created by people at the top of their game, from the writers to the animators to the directors to the musicians to the inimitable voice talents of Mel Blanc. It’s good stuff, and it holds up remarkably well on the big screen.

In fact, if anything, it’s better. I’m not sure if I’ve ever seen Looney Tunes in the theater before — it was always a TV show for me, or a compilation movie  on VHS or DVD — and it thrives from being back in its original venue. Some of that is just the basic nature of comedy — it’s easier to respond to things as part of a group than as one dude slumped alone on the couch.

But some of it was pretty specific to these cartoons, which were originally developed as theatrical pre-feature shorts. Take this gag, where an “audience member” stands up to get out of his row, only to be shooed back by Yosemite Sam. 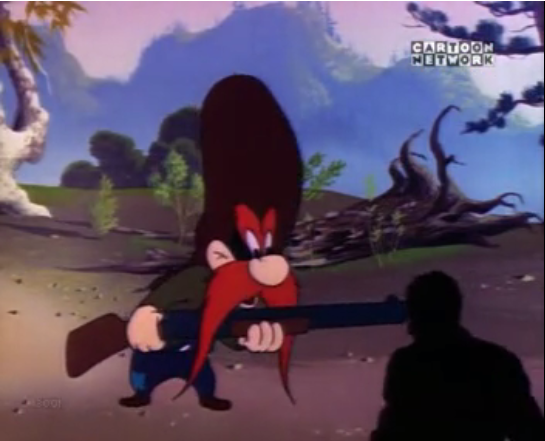 I’ve seen that gag, or variations thereof, probably dozens of times. And it’s fine, it gets a chuckle, but it’s largely unremarkable. In the theater, the perspective totally works. There’s an initial, irrational moment of anger where you think someone has legitimately stood up and blocked the projector. And Sam’s reaction plays much funnier as a result.

So I was already thinking about how Bugs Bunny plays in various forms of media when Looney Tunes #226 showed up from DC Comics. 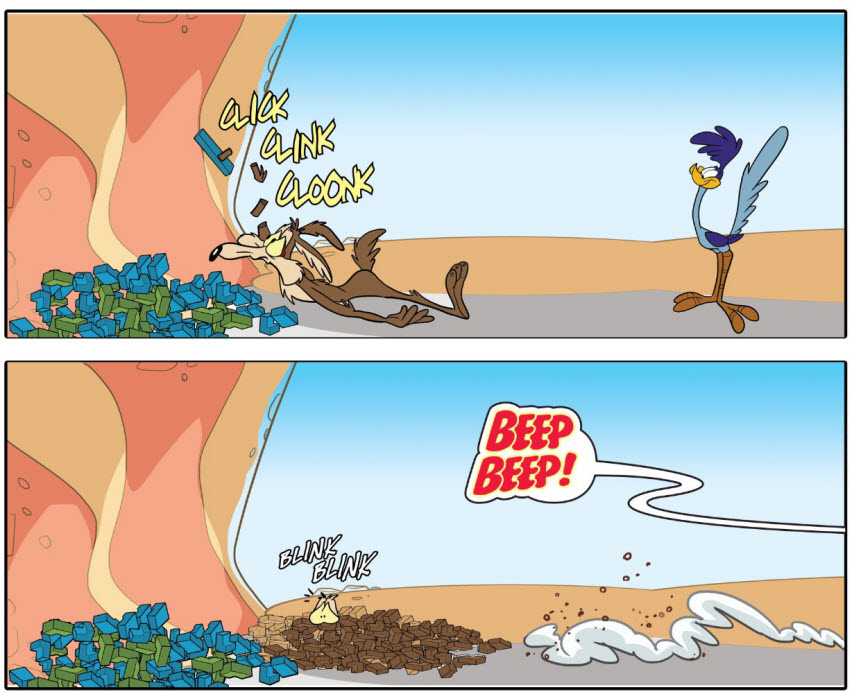 The book contains three stories: a Road Runner/Coyote strip, a Sylvester and Tweety two-pager, and a Daffy Duck short.

And the first two made a really strong argument for Looney Tunes sticking to moving pictures. They both tried hard, in different ways, to echo their source material. The Road Runner cartoon especially tried to replicate the long pauses and smash shocks that make up like 80% of the Road Runner/Coyote gags. You can see above two panels trying manfully to stand in for 10 seconds of bricks falling on the Coyote’s head, followed by a  momentary pause from the Road Runner before dashing off.

The art is perfect, the colors sharp, the intent smart, but the gag just died on the page for me. The YouTube version in my mind was mildly amusing, but … it’s one of those times where the old canard about the reader dictating the pace of the comics page can just kill a joke. And since almost all of the jokes in this strip trade on similar beats, they all fell similarly flat for me.

Tweety and Sylvester faced a different problem. Their voices and speech impediments, especially as originally portrayed by Blanc, are occasionally adorable and rarely an impediment to their stories. They just … are. On the comics page, depicted phonetically, it becomes a distraction, slowing down reading and killing more than a few jokes.

But the Daffy Duck story, written by underrated DC Comics utility guy Sholly Fisch, was different. Daffy nailed it. Because the whole conceit of Daffy’s story is that he knows he’s in a comic book. 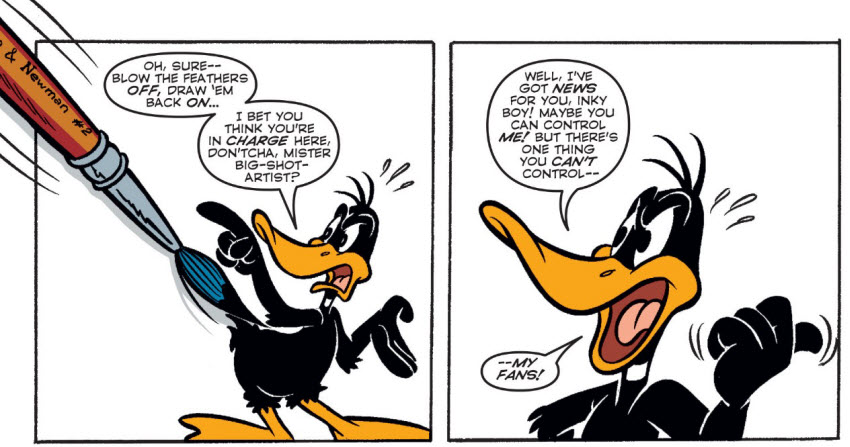 It’s nothing groundbreaking — it’s a comic book updating of the all-time great Daffy cartoon, Duck Amuck, or Looney Tunes reclaiming the metafictional approach from Grant Morrison’s Coyote Gospel, or any of a dozen other things.

But regardless of all that, it’s a comic. It’s Daffy Duck, being very Daffy Duck, doing Daffy Duck things in a comic book. And that makes all the difference. The gags are timed for the comic book page. There are panel border gags and word balloon gags and mylar gags, and not all of them work, but none of them fail because of the medium.

It seems incredibly obvious, almost to the point of ridiculousness, but even after 226 issues of the Looney Tunes comic (and literally thousands of “cinematic” superhero books), I guess it still needs to be said: comics are at their best when they’re not trying to be something else.

It’s a point that was driven home by another adaptation I read this week, The Flash Season Zero #11. 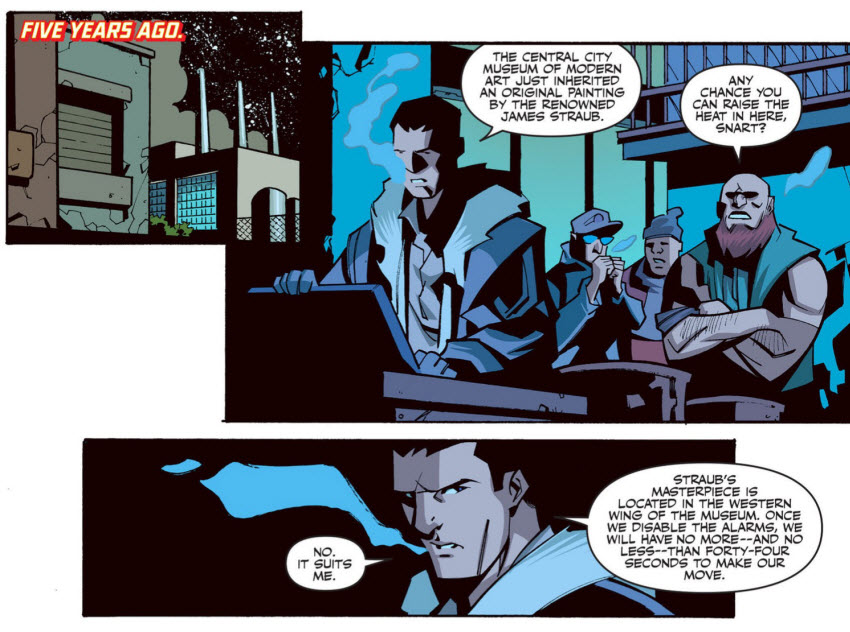 The Flash show is a consistently enjoyable bit of superhero fiction. It steers right into the skid of comic book ridiculousness rather than shying away from it, and has consistently been better for the decision. The comic book adventures of that Flash should, by all rights, have the same charm — they’re written by one of the showrunners, with art from reliable comic book vet Phil Hester. Instead, they stand as an endorsement of the importance of having charming, likable actors to play these parts.

Take the panels above. As Captain Cold, Wentworth Miller could chew on that “No. It suits me.” like an enormous hunk of beef jerky, or one of those disgusting dried pig ears you give to dogs. Something really chewy, is what I’m trying to describe. And it would work. It would be slightly over the top, maybe, or slightly eye-roll-ish, but it would add some verve that’s notably missing from the comic version. Again, it seems staggeringly obvious, but it’s still something that really jumps out.

In summary, we can all take away this simple lesson from this endless ramble: dialogue written for Wentworth Miller and/or Sylvester the Cat should never be used in a printed medium under any circumstances. 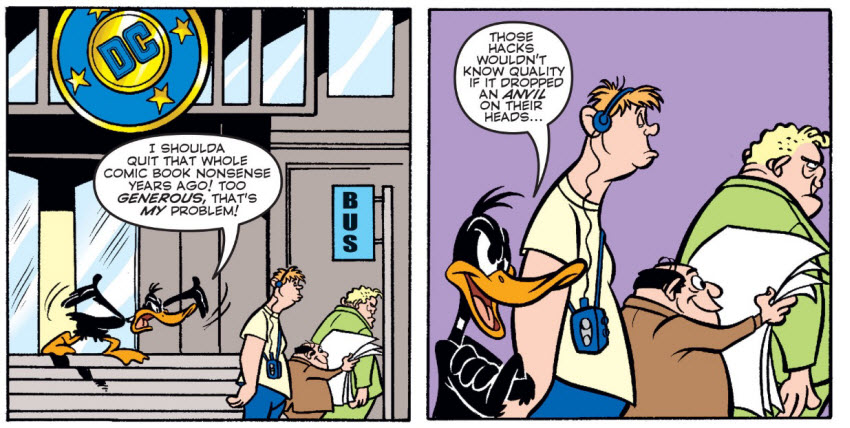