Housekeeping: If you haven’t already, scroll down for reviews from Matt and Jeff!

As part of a massive, at-times-overwhelming re-read of material for my guest-stint on X-Plain the X-Men — it’s me and Elle Collins talking about the Amazing Adventures run featuring the Beast, available this Sunday, Whatnauts! Be there or be somewhere else entirely! — I found myself re-reading the final issues of the original X-Men run one more time, and thinking about the ways in which nostalgia and common wisdom conspire to make us all that little bit dumber.

Here’s the thing: I don’t really like the Roy Thomas/Neal Adams run on X-Men. For the longest time, though, I had managed to convince myself that I did; I remembered reading the stories in British reprints when I was a kid, weirdly cut into two separate hardback annuals collecting slightly edited versions of #56-59 (The final two pages of #59? Entirely missing, replaced by a caption box that basically says “And then the Sentinels flew into the sun, the end”) and #61-65, and even if I couldn’t really remember the stories as such, I remembered being excited by the Sentinels — it was the first time I’d seen them, and the idea of these giant pink/purple robots was overwhelming to me — and the weird, packed nature of the stories: everyone, it seemed, was in here and things just kept happening. Plus, of course, I knew that these stories were classics and the best of the original run, because that’s what everyone would say. So, of course, how could I not like them? 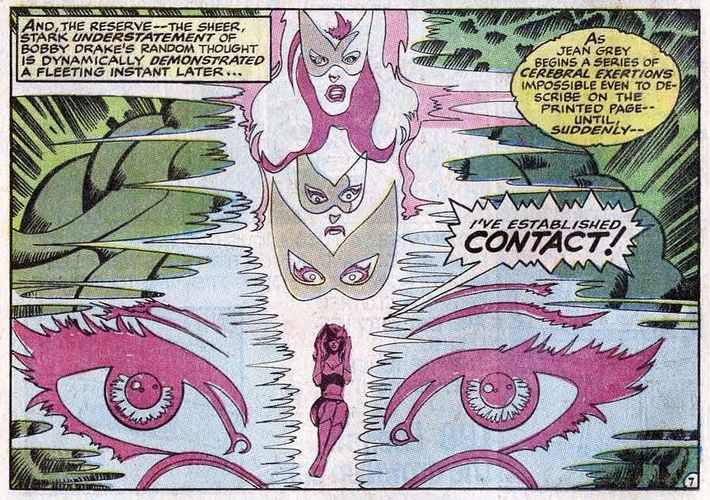 It helped, of course, that I hadn’t read them since I was the kid who had the annuals. In the meantime, I discovered the even-earlier X-Men runs, the Lee/Kirby, Arnold Drake/Werner Roth stuff, and I discovered that it’s messy and uneven and at times just plain boring, and yet despite all of that, material that I really love in some strange way. The Drake/Roth stuff in particular, reads to me like a hybrid of the hyper-square stuff that DC was doing at the time constantly trying to learn the Marvel aesthetic and failing in a fascinating way; it’s like a companion piece to Jim Shooter’s earliest Legion of Super-Heroes, which does pretty much the same thing.

In comparison, the Thomas/Adams stuff comes across as too slick, too polished with the shock of the new that gave the run its initial power completely dulled by the many, many comics that followed and were inspired by what those first comics contain. Coming at the material now — or in 2009, when it was collected in Essential Classic X-Men Vol. 3 and I re-read it for the first time in more than two decades — it was clear that, like a lot of “classic” material, there’s no way to really appreciate it the way those first readers did. We know too much, and we’ve learned all the tricks invented in the pages (The reveal of Magneto, especially, is hilarious because of course we’ve all seen him without his helmet on for years by this point; you know it’s him as soon as he shows up, so the idea that it’s any kind of revelation is almost ridiculous), and all that’s left to genuinely appreciate is the quality of the craft… which is where it falls flat for me. 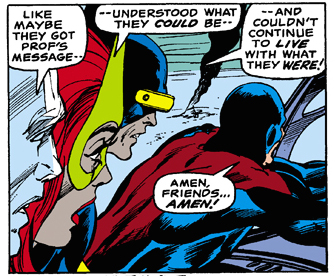 Thomas, ultimately, has the anal retentiveness of an Englehart, but without the playfulness or weirdness to make it less dry. His work does the job, but literally makes it feel like he’s doing a job. Adams, too, leaves me cold because my personal taste is to swerve away from his photo-realist, everyone-shouting-at-the-camera artwork in favor of something more cartoony and abstract. Again, I can imagine the impact that Adams’ work out have to readers used to Kirby, Buscema, Romita and (especially) Roth, but coming at it from a lifetime of artwork by those influenced by Adams, all I can see is the stuff that doesn’t really appeal to me.

I feel guilty saying that, though; these comics are classics, after all. And this is the dumb part: I actually do feel bad for not liking these comics, as if I’ve done something wrong, somehow. There’s part of me that would almost have rather not read them recently, so I could’ve relied on the nostalgia and the common wisdom and let ignorance be bliss. Instead, by having this particular opinion I feel… well, not hated and feared, but definitely one of the strangest critics of all.