Previously on Baxter Building: As the legendary run of Stan Lee and Jack Kirby winds to a close, the quality of Fantastic Four begins to suffer, settling into a particular groove that’s less inventive than before, but not necessarily less enjoyable, as the next few issues are going to display.

0:00:00-0:10:03: Fresh from one of our more embarrassing cold opens yet — this is really what happens before we start recording each episodes, Whatnauts. Sorry — we launch straight into a discussion about the way that the issues we’re covering in this episode (Fantastic Four #88-94) are definitely a step down from earlier in the Lee and Kirby run, but nonetheless echo what we’ve already read, whether in terms of the pacing or the silliness. (Also, I should warn you now: there’s some Skype weirdness in this episode, so I tend to get quiet at random moments for no obvious reason. Sorry!) 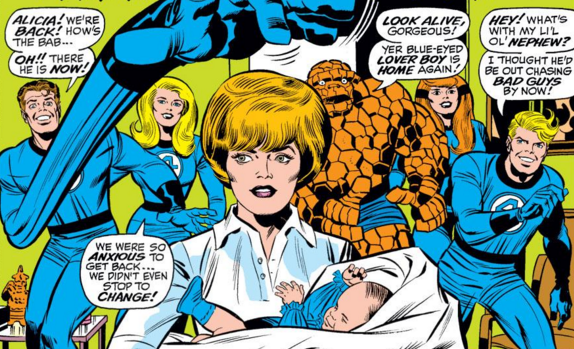 0:10:04-0:41:54: Fantastic Four #88 opens with some great family moments, thanks to some amazing Jack Kirby and Joe Sinnott artwork (despite Reed having two left hands on the splash page), before diving into something genuinely rare in a Fantastic Four comic: actual foreshadowing. Don’t worry, though; the issue still has some impressively nonsensical moments in terms of plotting, showing that Lee and Kirby haven’t completely gotten their act together just yet: Why would Reed move into a house that makes him sick, aside from plot dynamics? Don’t ask — just buy it! As Jeff points out, though, there’s perhaps some autobiography going on here on Kirby’s part than Stan Lee just can’t contend with. Plus: The worst eye doctor in comics! Classic misogyny in the Sixties Stan Lee fashion! And double-page splashes like this: 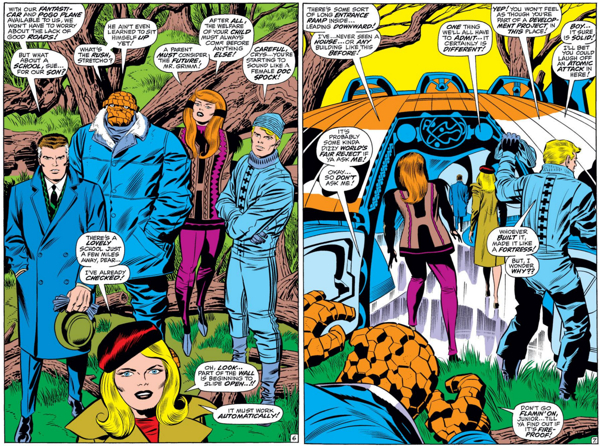 0:41:55-1:02:07: “Let’s move onto issue 89, Graeme,” says a Jeff who’s more interested in skipping past pointless Bullpen Bulletins than I am, apparently. We open with an amazing action sequence which features characters knowing things that they really, really shouldn’t know (Blindness apparently means something different in the Marvel Universe; suddenly, Alicia Masters’ career is explained). Thanks to Reed Richards’ by-now-traditional shittiness, we stumble onto the idea of a Reed Richards presidential run (No, wait, stay with us — especially by the time we start to brainstorm potential campaign ads), wonder about the debt this story owes to The Day of the Triffids, remark on the return of the Lee/Kirby not-really-following-each-other’s-lead dynamic, and talk about the strange subtext of nerd bullying that accompanies the Mole Man, especially in these earliest appearances. But all is not lost, because we get pages like this along the way: 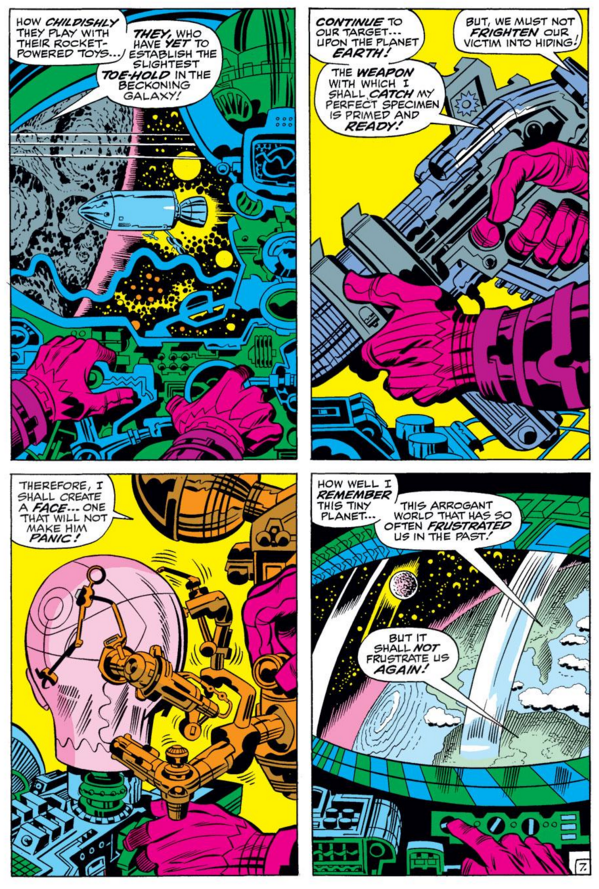 1:02:08-1:14:44: “This is the issue you were complaining about,” I say to Jeff, and there’s a lot to complain about in Fantastic Four #90: The odd pacing? The ridiculous plot that sees? The fact that Jack Kirby creates awkward FaceTime calls four decades early? All of the above! When we end up talking about Burt Bacharach songs, you can tell that we’re particularly interested in what is essentially the same kind of transitionary issue as #50 — which we loved, back in the day — only without much to offer beyond an amazingly slight plot. What happens in this issue? The Thing gets kidnapped. That’s it. No wonder that we move pretty quickly onto… 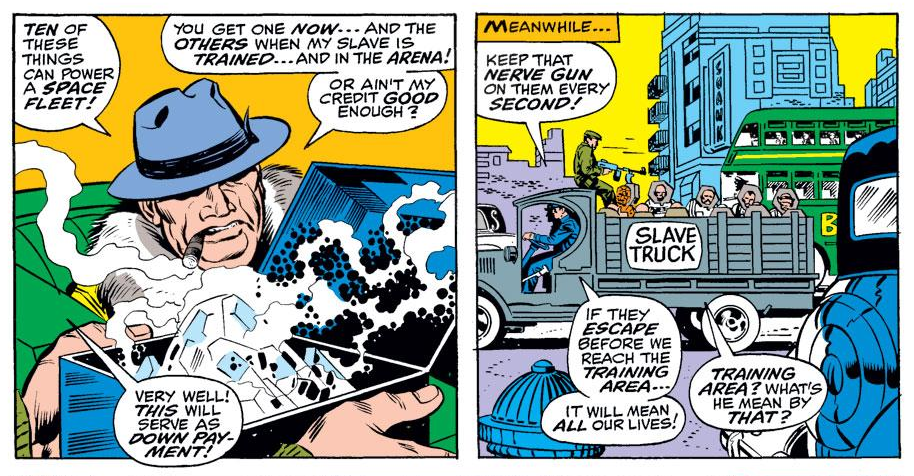 1:14:45-1:38:05: Hey! Have you ever seen the Star Trek episode “A Piece of the Action”? You have? Then you’ve read Fantastic Four #91! As Jeff points out, after a period where Kirby didn’t really seem to be having fun with the FF, this storyline quickly transforms into him embracing his comfort zone, with 1920s gangsters and sci-fi colliding in what is essentially a Thing solo story. That doesn’t stop us from getting into a blabbing quagmire talking about the problems with slavery narratives in science fiction. But, thanks to the wonder of this episode having been available on the RSS feed for a few hours, here’s a great counter to our discussion from Whatnaut Bruce Baugh:

I think you guys are overlooking something important about the use of slavery in FF (and Star Trek, and other places). You refer to the creators as “white guys”, without ever touching on how many of them were Jewish guys. Industrial slavery was not an abstract thing for Kurtzberg and Leiber, or for David Gerrold and Leonard Nimoy, and a bunch of others. It was a thing that happened in their own lifetimes, in Germany and the Soviet Union, sometimes to relatives, and was a continuing reality in their community life.

They all knew the extent to which their being allowed to be successes as a contingent thing. David Gerrold’s written about this some. Star Trek was less than a decade from when John F. Kennedy had to jump through a lot of hoops to provide that he was sufficiently distanced from Roman Catholic institutions to be acceptable as a president, and rampant vocal anti-Semitism was very much a part of public life then.

Now, yes, a bunch of them were really missing the boat on the civil rights (and other) needs of African-Americans and other people of color. Some of the survivors, like David Gerrold, are quite comfortable admitting how much they missed. But they really weren’t looking at it from the point of view of people fully and comfortably assimilated into the white mainstream.

Which is to say: Bruce is bringing a far smarter point of view to this than either Jeff or myself, I think. We also talk about this being essentially a Thing solo story, and the ways in which it kind of proves that Ben Grimm is the strongest character in the series in more than just physical strength. 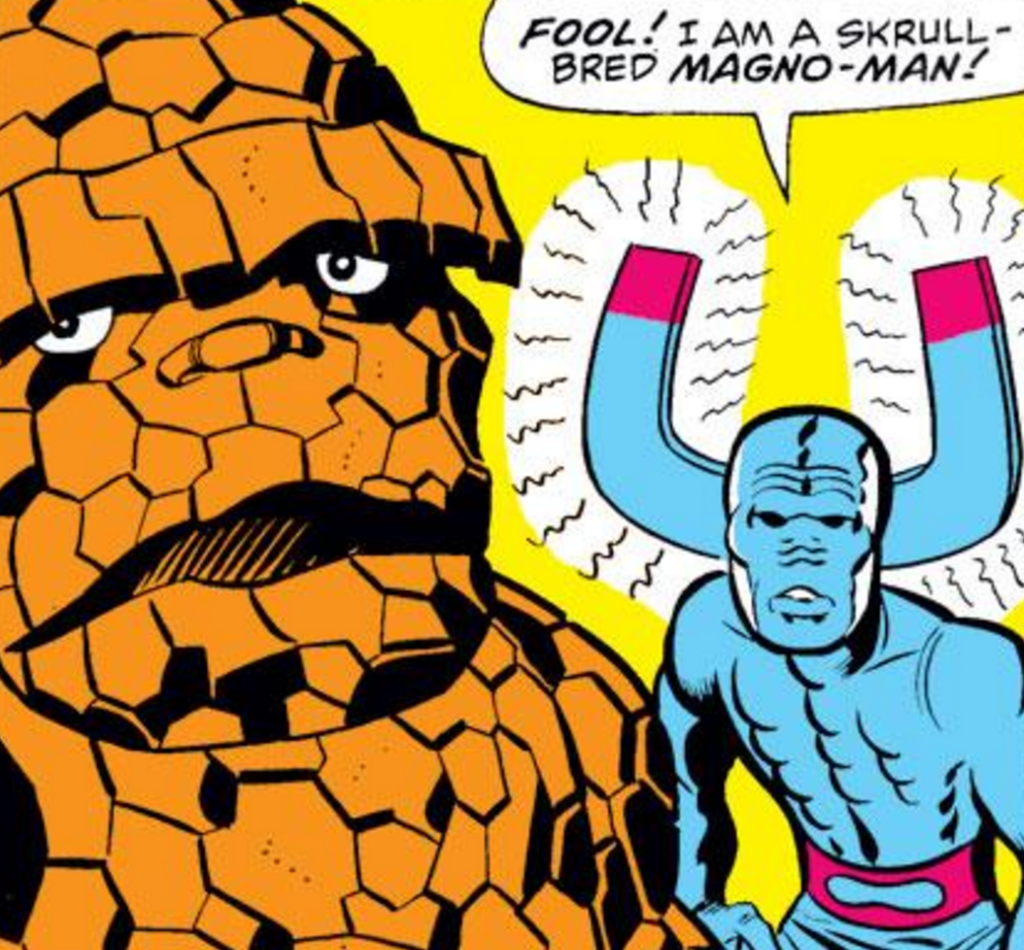 1:38:06-1:52:24: FF #92 introduces the sensational character find of 1969: Magno-Man, an alien who has far too many abs, and a magnet through his head. Literally: a magnet just sticking through the middle of his head. Oh, and we get to see Reed Richards proving that he is the most forward thinking superhero of the 1960s in terms of gender politics… oh, wait, no, I mean the exact opposite of that. 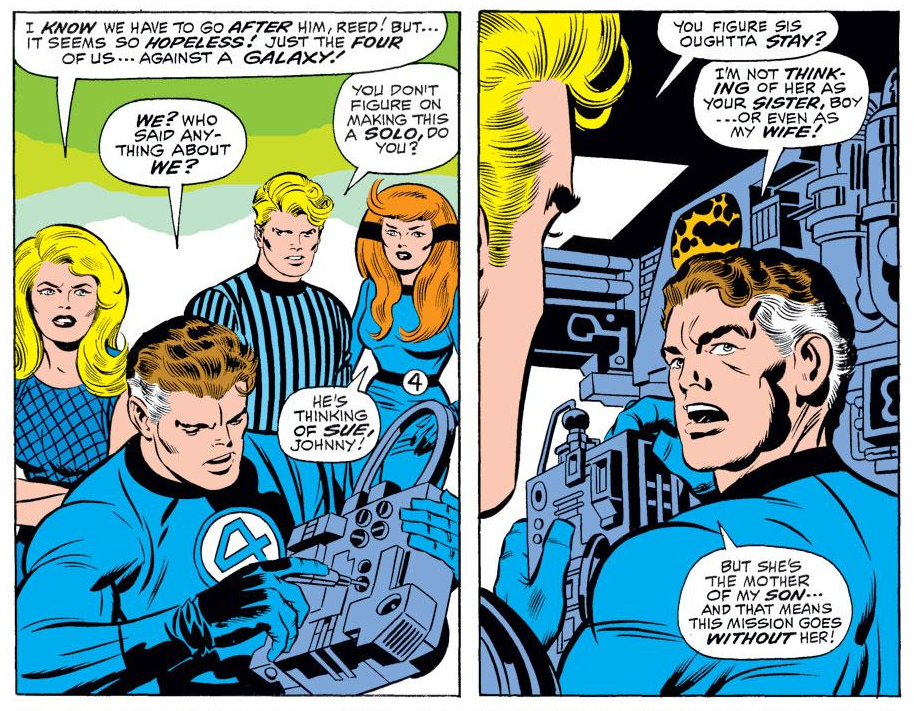 Meantime, Jeff and I obsess about page 14 of the issue, because it looks like this: 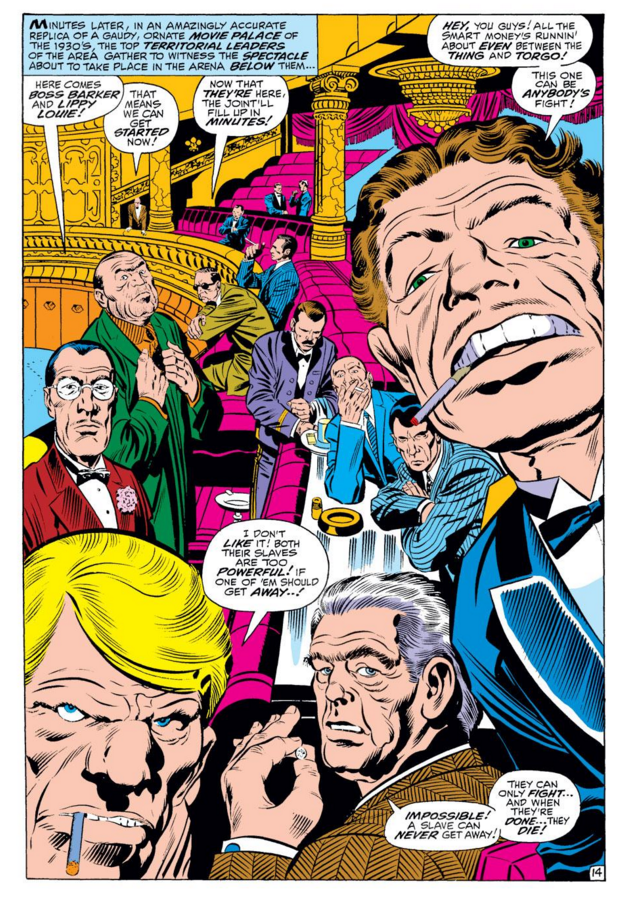 Prime Kirby in the middle of an era where Kirby feels particularly disinterested? Yes, indeed, and we fall into a discussion of Kirby as Outsider Artist and KirbyWorld as a narrative concept. (For those hoping for a surprise comparison between Kirby and Francis Ford Coppola, stay tuned.) Oh, and because I specifically mention the panels where the games are being announced, here they are… 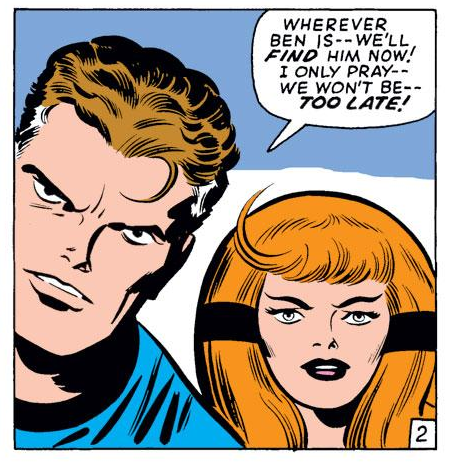 It’s a shame that Sinnott’s gone, because his inks could at least have added some sheen to a particularly strange, disappointing issue where the pacing is off, the characters are off, and the climax of the entire four-part arc is both rushed and confused, with Stan and Jack seemingly playing against other in even more interesting ways than usual. (For those who enjoy Jeff’s alternate takes on what could have happened, he has a very good idea of how this story could have happened.) “It’s a very, very strange issue,” I say, and I stand by that — and it’s not helped by inks like this: 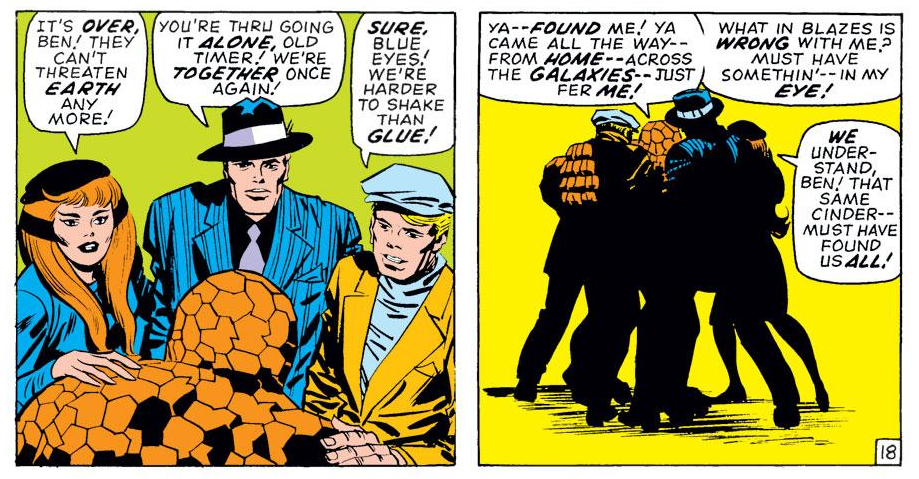 Oh, Frank. But the moral of this story? Don’t invite the Fantastic Four to your local uprising (and don’t expect Stan to have something worthwhile to say at the end of a story about slavery, apparently.)
2:10:05-2:22:26: “Oh, man. I loved this issue,” I say about FF #94, and I quickly run through the reasons why: It’s Kirby doing the kind of supernatural comedy that he’d do a lot more of at DC, especially in Mister Miracle and The Demon, and there’s a lovely amount of sentimental soap opera as Franklin finally gets a name, and Ben Grimm gets all verklempt, even though Jeff would rather think he was a monster for some unknown reason. And that’s not even mentioning the first appearance of Agatha Harkness and maybe the most Saturday morning cartoon villainish version of the Frightful Four yet, and that’s exactly the level of respect that they deserve. (We also get an introduction to the perpetual notion that the Frightful Four will now be made up of the Wizard, the Sandman, the Trapster and someone who will betray them, for reasons.) Jeff isn’t so on board, for completely valid reasons: it’s fun, but maybe it’s not a Fantastic Four story, per se. 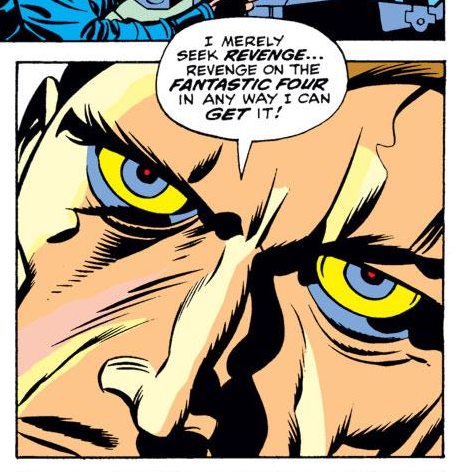 2:22:27-end: And that, dear listeners, is your lot. Next time, we’re going for broke as we hope to tackle #95-102, AKA the final Kirby issues. Trying to get through that many issues in one episode may be a crazy idea, but wouldn’t it be great if we could manage to do the entire Kirby run in the first year…? Come back next month to see if we’re successful — and in the meantime, look for us on Twitter, Tumblr and Patreon, as well as this very site for those who’re looking for some Frank Miller Dark Knight commentary over the next few days. Thanks, as always, for listening and reading, and may you all have a great Thanksgiving, whether or not you’re American and celebrate it in the first place.