Previously on Baxter Building: Having built up a template for modern superhero comics — a template that still informs today’s comics, more than five decades later — Stan Lee and Jack Kirby’s creative pairing is on the downswing, with Kirby becoming visibly disinterested in the material and Lee distracted by other Marvel duties. Having contributed the final lasting character to the FF mythos (Agatha Harkness, who showed up in Fantastic Four #94), it’s time for this particular good thing to come to an end.

0:00:00-0:06:04: Welcome, dear Whatnauts, to what Jeff and I admit is going to be the saddest of the Baxter Buildings to date. It’s not just that we’re covering Jack Kirby’s final issues on the series — Fantastic Four #95-102, for those playing along at home — but that those final issues are, to put it mildly, not very good. How not very good? Jeff and I consider whether Stan Lee is the episode’s MVP, which should put things in some kind of perspective. As the cold open and the introduction to the ep make clear, I decide to try and limit how long we spend on each issue to try and speed through the horror. Do I succeed? Wait and see! 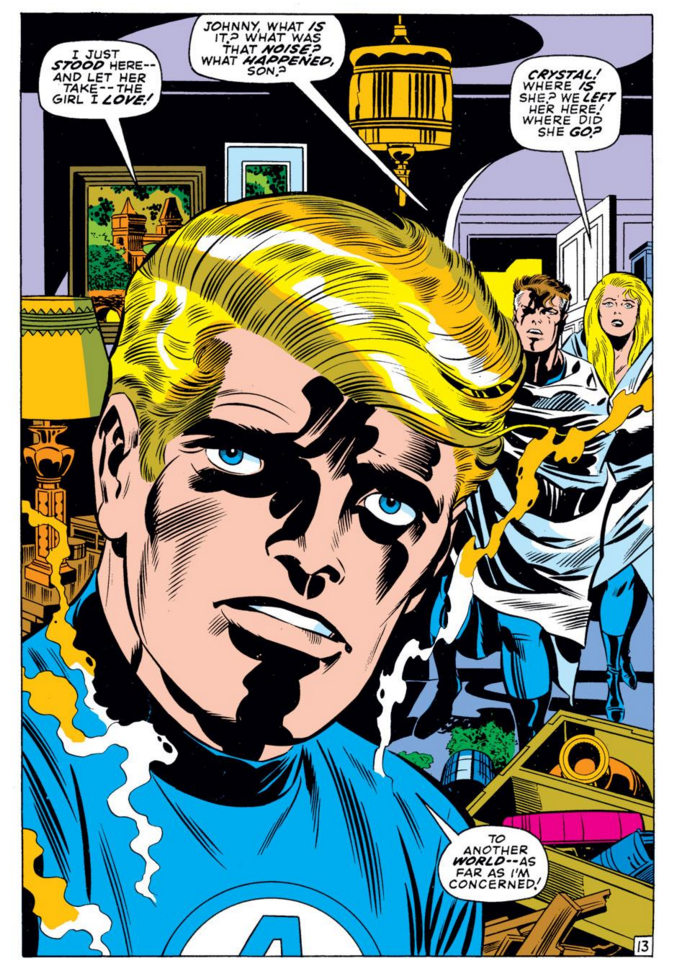 0:06:05-0:20:57: How terrifying is the man called Monocle? So terrifying that he doesn’t even need a declarative “the” before his name! Which, sadly, might be the most interesting thing about Lee and Kirby’s latest creation, and FF #95 as a whole, really. “This is an issue that makes no sense,” I complain at one point, and when Jeff adds, “in a charitable sense,” then you know that things aren’t looking good. It’s well-drawn — especially the splash on page 13! — but it’s a mess of a story, even with the entire United Nations at risk. “You can see Kirby lose interest after panel 3,” Jeff says about the last page, and that’s what this entire issue is like. 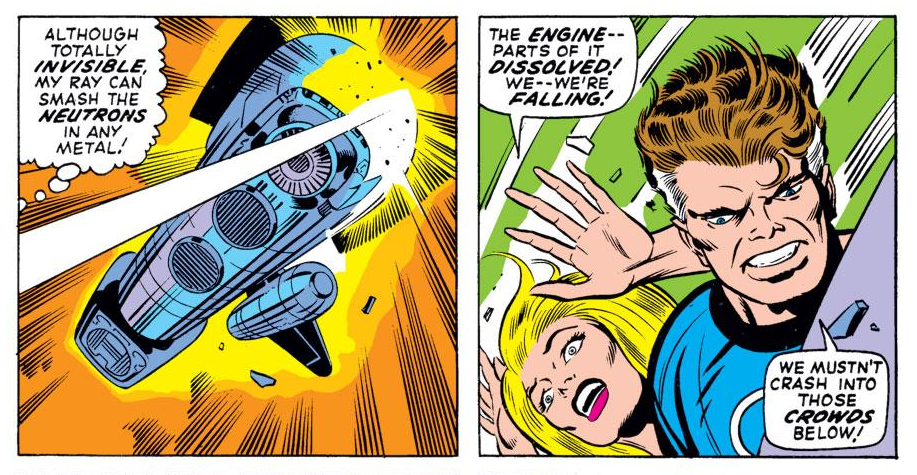 0:20:58-0:40:39: A shocking turnaround in Fantastic Four #96: the Mad Thinker turns out not to be too great at thinking. “He really should be called the Think Madder,” says Jeff as we examine the many flaws in the Thinker’s latest plan, to use a group of exact Fantastic Four duplicate androids to defeat the Fantastic Four as opposed to doing almost anything else with them. Is the plot defeated by Reed Richards being Reed Richards? Well, yes and no; Jeff even supports the logic behind that decision. On the plus side, Jeff describes the Thinker as “fat, angry Beethoven” and gets into gendered mechanisms, so it’s not a complete waste of time. Just almost a complete waste of time. 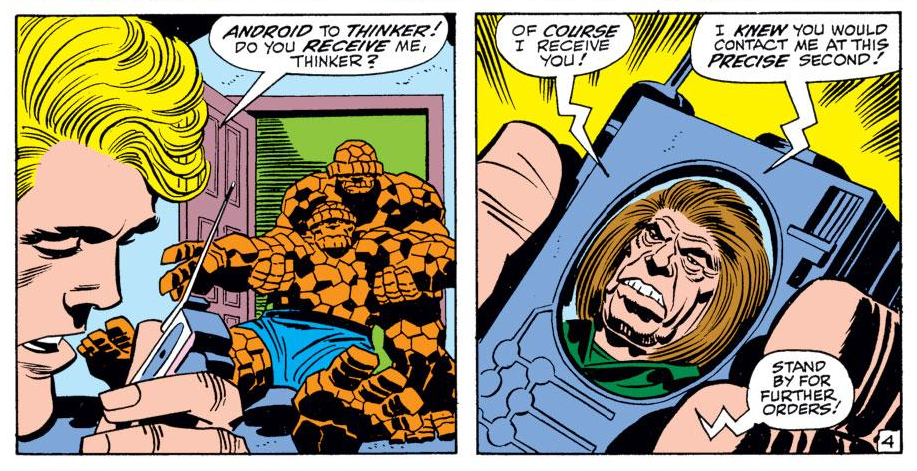 0:40:40-0:53:06: I’ll just spoil it here: the most surprising thing about FF #97 is the debut of Marrina from Alpha Flight when you least expect it. But before you get to that, “The Monster From The Lost Lagoon” includes some wonderful Kirby/Giacoia renditions of water and some fascinating dolphins: 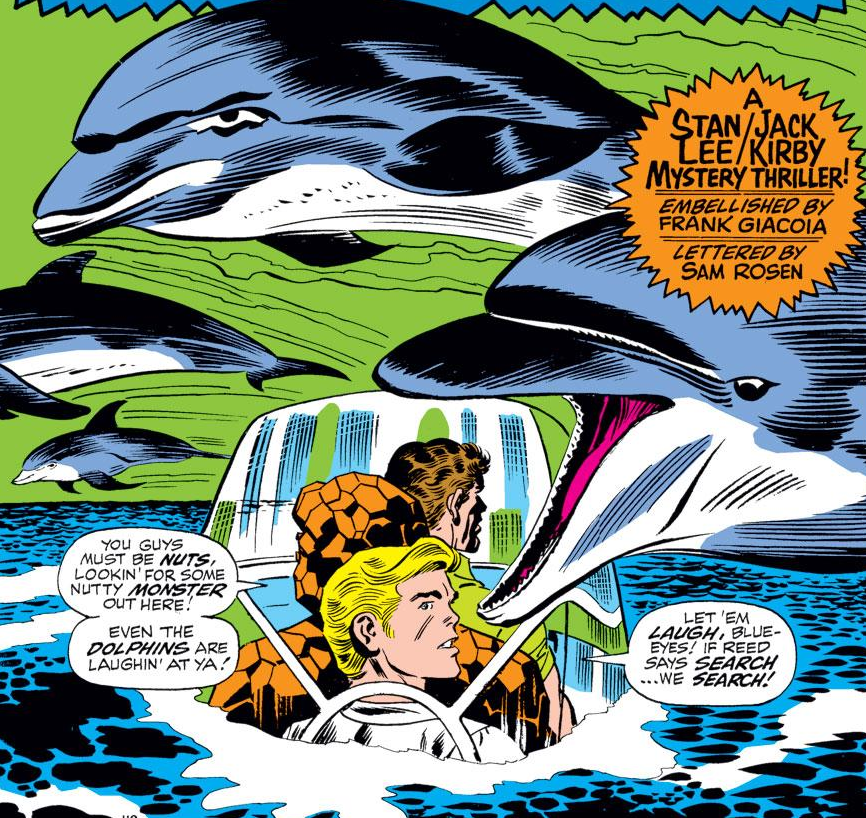 Not for the first time, the actual plot of this issue — the FF (sans Sue, as in most of these issues because girls, right?) investigate the mysterious disappearance of a number of ships, and run across a mysterious sea creature — is the least interesting thing, with the various ways in which Lee and Kirby try to distract the reader from just how derivative the story is, including a Sea World-esque display of aquatic acrobatics and Stan Lee not understanding what “without provocation” means. All this, and a shout-out to our Avengers re-read from 2014’s Wait, What? episodes, too! Oh, and because Jeff compares Marvel Unlimited coloring to scans of the original pages… Here’s MU and then the scans, to see what he’s talking about: 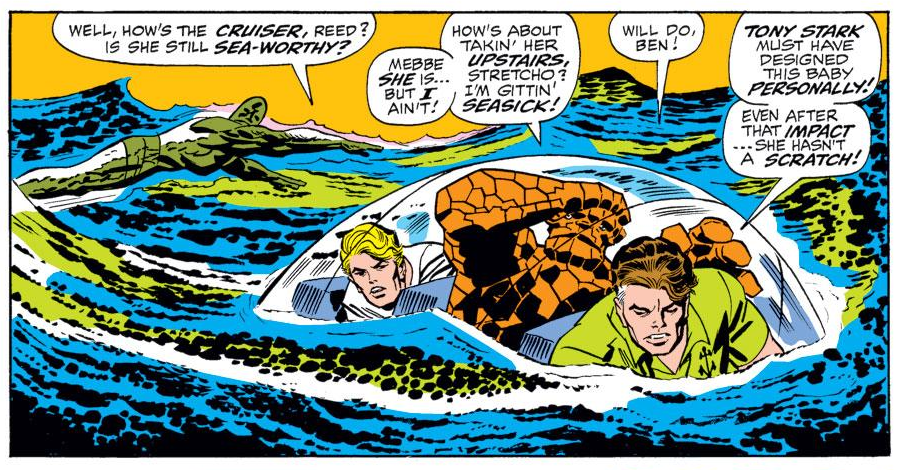 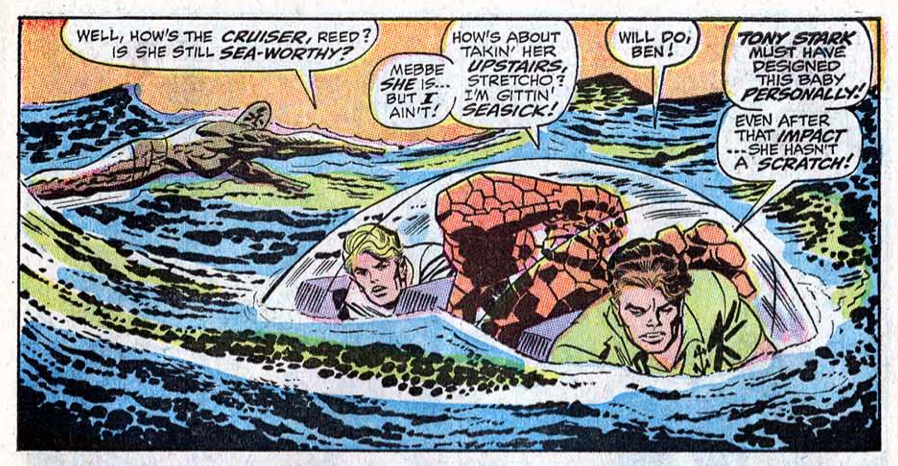 0:53:07-1:08:40: In theory, a 1970 tribute to the previous year’s moon landing might make Fantastic Four #98 a highlight of this run of issues, and it kind of does… but mostly because it’s such a strange read. Why celebrate something that the FF themselves did (not to mention the Red Ghost) way back in FF #13? What is the Kree Sentry actually trying to do with (Jeff’s favorite name for a piece of Kirby tech, apparently) The Stimulator? How long does the Apollo mission take in the Marvel Universe? As Kirby would later declare on a Jimmy Olsen cover: don’t ask — just buy it. 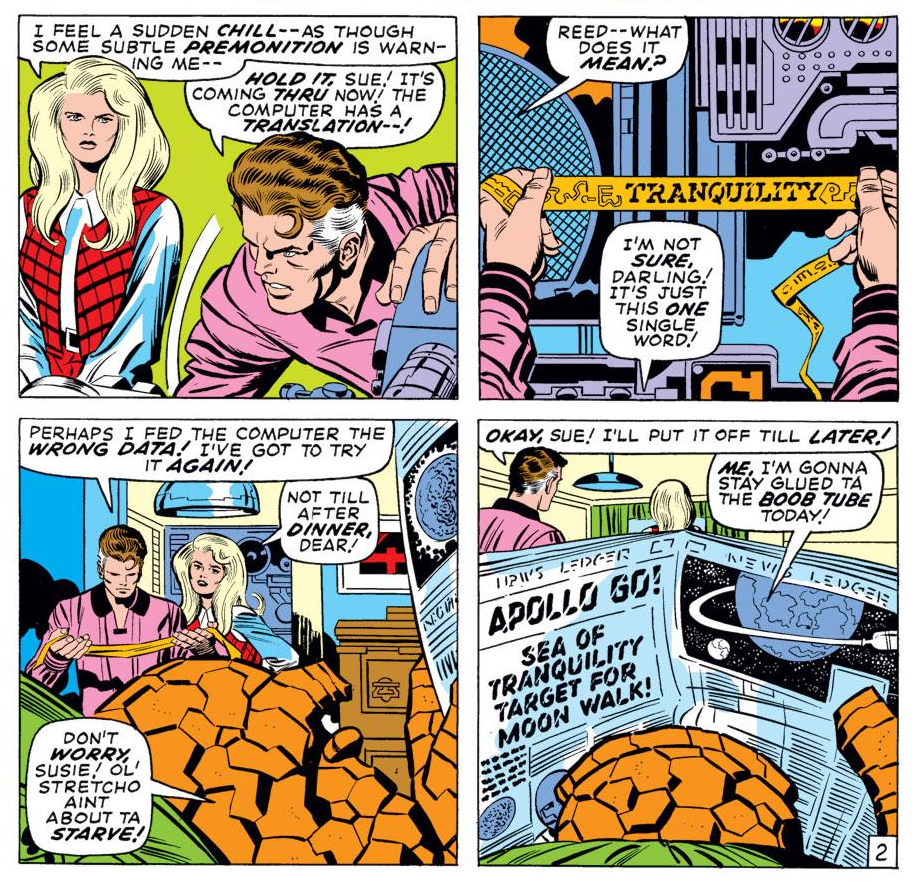 1:08:41-1:25:40: What’s that you say? You want to read a comic where your fave is, as the kids say, problematic? Well, if your fave is Johnny Storm, then — as Jeff puts it — “the super-stalker-y” Fantastic Four #99 is your bag, Daddio. From the accidentally created euphemism of “downhill skiing” to the Human Torch’s mission to rescue Crystal from the clutches of the Inhumans, as long as we all agree that “rescue Crystal,” we just mean “be super creepy and not care about what Crystal wants whatsoever.” He’s not just creepy; he’s also apparently very bad at clearing his path through international airspace, but at least it looks good. As Jeff puts it with no little understatement, “bringing genocide onto your girlfriend’s race just because she moved away from you, of her own free will, is a super dick move.” 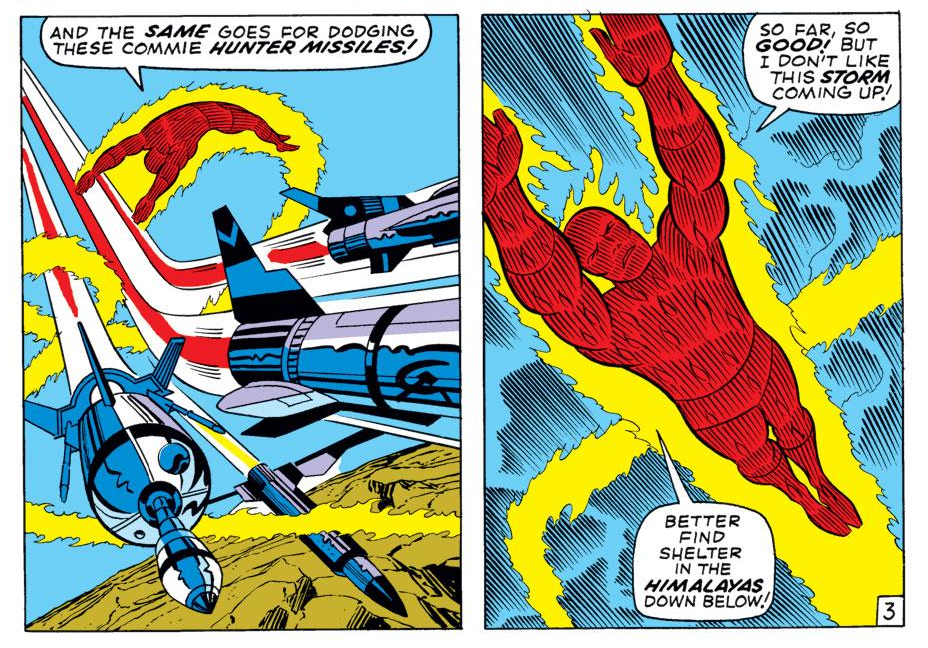 “I don’t like this Storm coming up!” Johnny speaks for the readers, accidentally.

1:25:41-1:38:17: You can tell from the fact that Jeff’s response to my bringing up Fantastic Four #100 is to moan, “Oh God,” that this isn’t a great anniversary issue. But, really, this is an actively bad anniversary issue that not only includes villains that the FF have never actually met, but also manages to forget what the main villain’s powers actually are. Stan Lee, I know you were busy and all, but come on. Want to see the FF and their villains seem utterly ineffectual, mostly drawn in a Watchmen-esque nine panel grid that, as Jeff points out, completely robs Kirby of his visual dynamism? Then you’ve found your ideal comic; the rest of us will be over here, crying at the disappointment and wasted potential.

1:36:18-1:45:05: From the sublimely shit to the ridiculous but awesome, FF #101 has Marvel’s fake mafia “the Maggia,” a plot that genuinely involves the FF being evicted and Sue Richards kicking ass and taking names. Oh, and the Thing dancing. 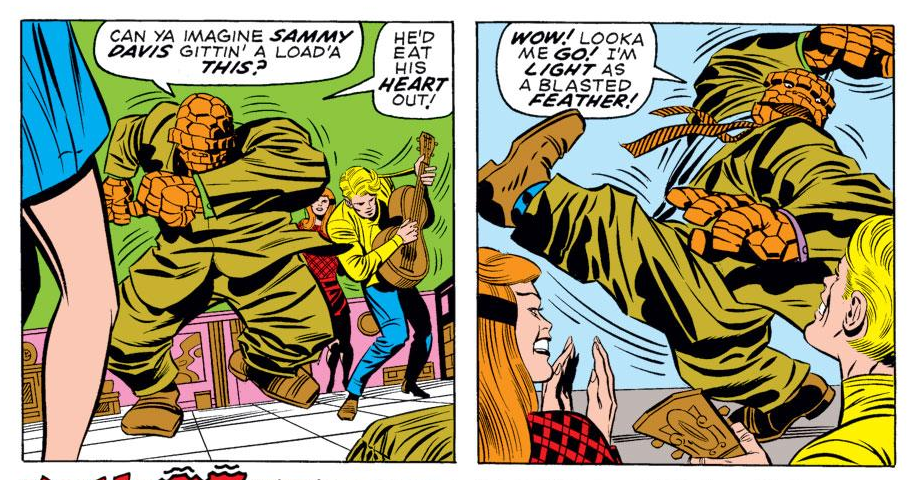 What could be wrong with this? Jeff, why don’t you fill us in? “Imagine an issue of FF on fast forward and making no sense, and you have FF #101.” Well, sure, it’s got weirdly rushed pacing and the story doesn’t really have the greatest logic in the world. But it’s still got the Invisible Girl being amazing, and we end up talking about the origins of Willie Lumpkin for a brief instant, so good luck convincing me that this isn’t the highlight of everything we’ve been talking about so far. 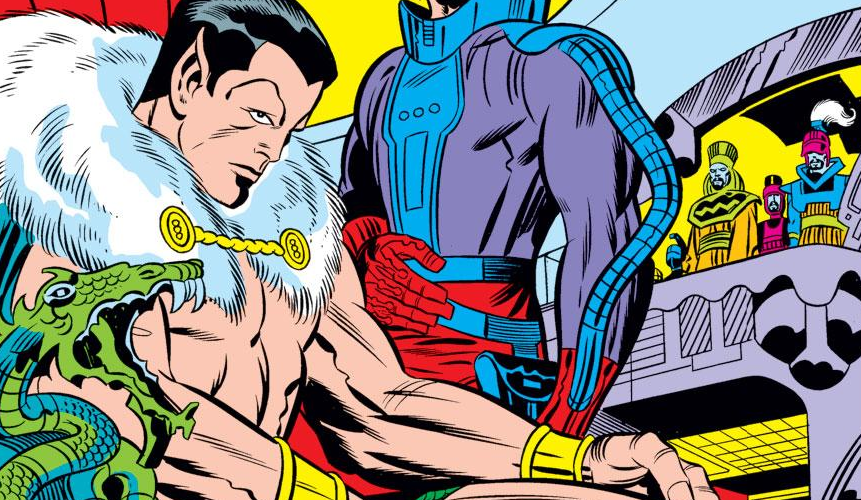 1:45:06-1:57:16: How does the final Kirby issue — well, aside from some re-purposed art a few issues from now — hold up? Fantastic Four #102 is “a sad-making issue,” as Jeff puts it, and that’s entirely fair: the first of a multi-part story, it lacks both the narrative verve of even the last few issues and the visual flair that we’ve come to expect of Kirby. Moreso, it pulls in ideas from greater Marvel Universe continuity for the first time in the series. It’s… a mess, and a really, really sad end to one of the greatest runs on any superhero comic ever.
1:57:17-2:19:48: “So let’s actually get to the most interesting part of this issue, which is not the story,” says me. What it is, is Stan’s Soapbox from the Bullpen Bulletins page, which looks a little something like this:

“It’s such a weird way of talking about this massive blow,” as Jeff puts it. “I’m intrigued and also appalled and kind of saddened by that.” Did Stan see Jack’s departure coming? Did he understand what was actually happening? We discuss. Was the bravado just for show, or was Stan really that unaware of what was going on with his creative partner? When did Jack stop caring about the material? 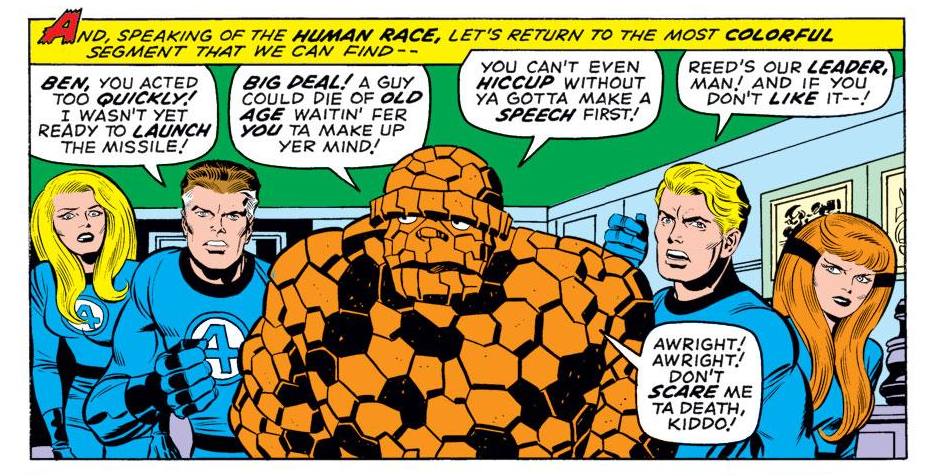 2:19:49-end: “If you had to pick an optimal last issue for Kirby, what would you have picked?” asks Jeff, and the two of us struggle to work out when we would have rather Kirby left the book and avoided these awkward last issues. (The answers might surprise you, if you’re thinking we’ll choose the obvious jumping off points.) Jeff then suggests a surprise change in direction for the podcast next year — don’t worry, we won’t be taking it — and as always, we let you know all of the places we can be found on the Internet: Twitter! Tumblr! Patreon! To all who’ve listened and enjoyed this first year of Baxter Buildings, thank you very much. We can’t say “the best is yet to come,” because the Kirby era is over, and we’re headed into some strange territory in 2016 (starting with next episode, where we cover #103-112), but it’ll certainly not be dull. Where do the FF go without their primary creative force? Where does Baxter Building go without the opportunity to talk about the luscious Kirby art? Next episode: Into the unknown!

6 comments on “Baxter Building Ep. 12: “Another One Like That And You’ll Wreck The Whole Furshlugginer Building!””