Previously on Baxter Building: Having successfully created the Marvel Universe as we know it with the first four years of Fantastic Four, Stan Lee and Jack Kirby’s ambitions have apparently only grown with the introduction of the Inhumans and, in the very first issue we’re about to talk about, the first appearance of the Silver Surfer and his very, very hungry boss. 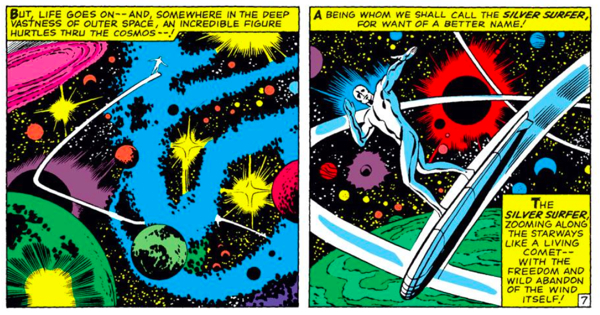 0:00:00-0:00:47: A metatextual cold open, in which I tease the cold open that you don’t get to hear — unless you’re a Patreon supporter, because, yes, the cold open that I talk about is available in the digital grab bag as a supporter extra for those who want to hear what kind of a week I had last week.
0:00:47-0:07:41:Jeff and I introduce the contents of the episode — we’re covering Fantastic Four #48-53 in this episode, although we say that we’re doing #54 repeatedly; chalk that up to optimism in the fact that, maybe, we wouldn’t talk too much this time around. Oh, if only! This is Lee and Kirby’s FF in “full effect,” as Jeff puts it, and we launch straight into it by discussing what Joe Sinnott brings to the artwork of Jack Kirby. (Jeff references this comment by Archibald at one point, in talking about Sinnott bringing the look of Kirby and John Romita closer together.) You can’t just put it down to Sinnott alone, however; we also discuss the fact that Kirby’s art is starting to feel like the same artist who worked on things like New Gods, The Eternals and Captain America in the 1970s in passing. 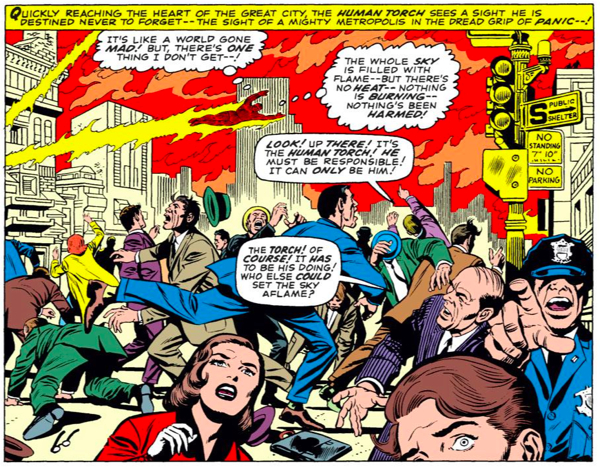 0:07:42-0:19:25: We return to Fantastic Four No. 48 right where we left it, with the team escaping Attilan as it gets shut away from the rest of the world “forever.” In fact, we return exactly where we left off, talking about how much Stan Lee adds to the beautiful, yet occasionally narratively unhelpful, Kirby aesthetic. Also under discussion: Does this issue set up today’s superhero comic by being an entire issue of foreboding for an event that only happens on the very last page? I argue against that theory because of the amount of action on offer, but feel free to disagree in the comments below. And is Stan Lee accidentally setting up the idea that Reed and Sue are the most dysfunctional marriage in the Marvel Universe? (Spoiler: Yes.)
0:19:26-0:23:58: Whether intentionally or otherwise, the pacing of this issue really adds to the feeling that events are happening out of control, but Jeff would rather talk about the fact that the Fantastic Four are quietly becoming guest stars in their own series — and why that’s a good thing.
0:24:59-0:36:06: FF #49 “is such a weird issue,” I say, and a lot of that is down to the surreal pacing of the whole thing, which includes this scene: 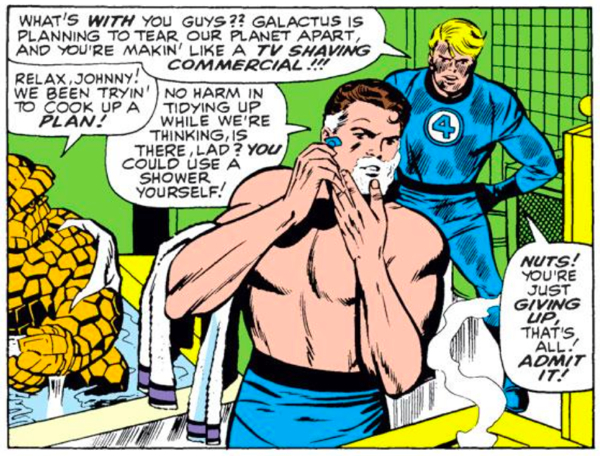 Only in Lee and Kirby’s FF would you get a bath scene with the Thing in the middle of such an epic story as the Galactus saga. Jeff makes a really impressive case for this being a character moment instead of just a comedy moment, before he talks about the ways in which the issue lays the groundwork for not only Jack Kirby’s DC career but also Steven Spielberg’s. We get back to what Stan Lee brings to these issues, as well, with my describing this era of the series as a confidence trick (albeit a really enjoyable one), and comment on the fact that the Silver Surfer looks a little more alien than he’ll later become at this point… 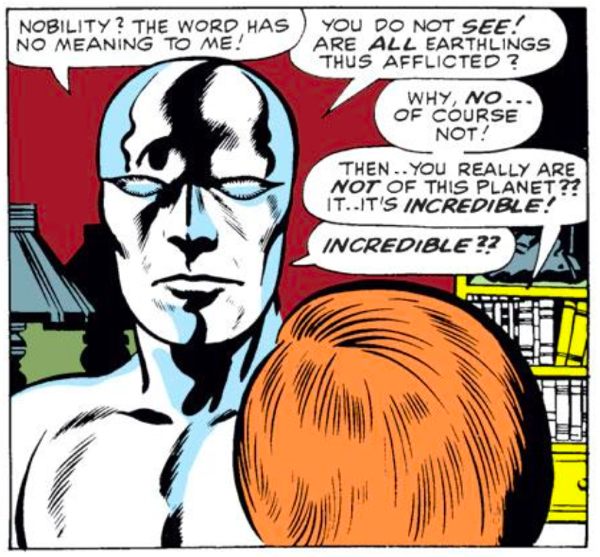 0:36:07-0:46:09: How on fire are Lee and Kirby at this point? On fire enough that scenes in which neither are doing their best work, and yet, somehow it works nonetheless. Is it because Kirby is subconsciously channeling fairy tale logic yet again? (If there’s one unconscious theme of Baxter Building to date, it’s that Fantastic Four by Lee and Kirby is a series of fairy tales.) Is it the basic design of the Silver Surfer on the whole, and the way in which the body language of the character underscores his calm demeanor? The best Galactus, by the way? The melodramatic one, despite what Jeff thinks.
0:46:10-0:56:09: We arrive at what just might be the highpoint of Lee and Kirby’s Fantastic Four, at least in terms of the out-there, expansive nature of the pair’s storytelling and ambition, as the Watcher sends Johnny beyond the known on a secret mission. Kirby and Sinnott’s visuals approach abstract genius, and Lee comes up with something to match (including an unknowing shoutout to Kirby’s latter Fourth World work). It’s trippy, disconnected from everything else in the issue, subverting narrative expectations — Jeff’s detour about the way in which this subplot rejects Joseph Campbell and is reminiscent of Blue Velvet of all things is fascinating — and all the better for it. This is the way out, whatnauts. (Enjoy a surprise cameo from Gus and Ernie midway through this conversation, too.)

0:56:10-1:16:31: “Greater than the greatest” is how Stan Lee describes the 50th issue of Fantastic Four, and he’s… not entirely wrong, despite the fact that this issue is a letdown compared with the first two issues of this storyline. How does this issue connect with Bob Layton and Squirrel Girl? The answer may surprise you! Once again, Stan steps up to make sense of some of Kirby’s more narratively-confusing panel-to-panel coherent, and then introduces the concept of moral relativism to the Fantastic Four when you least expect it, while the Watcher all of a sudden looks like a bad guy: 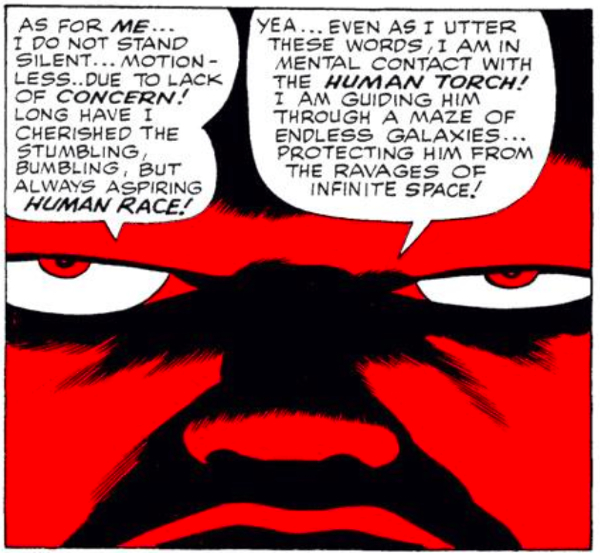 Johnny returns from beyond with… a Macguffin, and I’m not happy about that, although it works for Jeff (in part because it plays into Kirby’s tendency to fudge his endings and rely on what came before for emotional impact). What’s the story all about, anyway? Not the ultimate fate of the planet, if the real climax of this issue is anything to go by: oh, Silver Surfer, you deserved better… maybe? Plus! The previously unknown connection between Fantastic Four #50 and Multiversity!
1:16:32-1:20:43: “Not to put you on the exhibit stand,” Jeff says before asking putting me on trial and asking me how I would have preferred to see this storyline end. Well, I did say that I thought the end of the story was unsatisfying. My lesson has been learned for the future, don’t you worry.
1:20:44-1:28:07: Ben Grimm is a self-involved dick, ladies and gentlemen, but we love him nonetheless (Still, pay more attention to Alicia, Ben!). More importantly, FF #50 features the first appearance of one of my favorite Marvel Universe characters: Wyatt Wingfoot, who singlehandedly redeems the amazing amount of filler that closes out the issue.
1:28:08-1:29:11: In which we arrive at “This Man, This Monster,” Fantastic Four #51 and probably my favorite issue of the series. Not that it started out that way, as I explain my secret origin with the story.
1:29:12-1:45:52: Jeff makes a reference to this Wait, What? art from Gar Berner, which is just great: 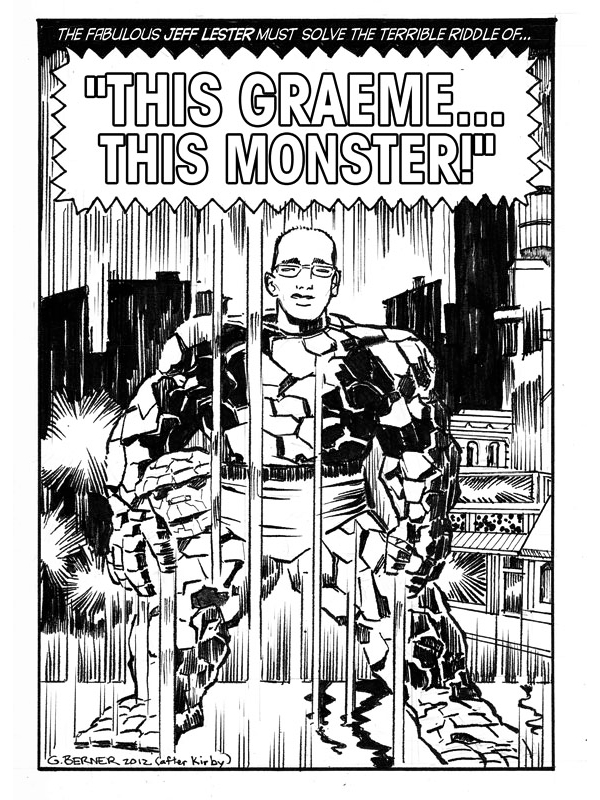 Isn’t that such an amazing piece? And riffing on one of the finest splash pages in the series to date, as Kirby and Sinnott bring their A game entirely. “You can read the expression on his face as just the deepest desolation,” Jeff puts it, which is entirely true. Who doesn’t love this page? Who doesn’t love this issue in general? Under discussion in this issue: the wonderful art, the plight of Ben Grimm’s helplessness and the fact that it’s not a story about any of the Fantastic Four at all. (Remember what Jeff was saying about the FF becoming guest stars in their own series?) Also, what can the fake Thing teach us all about self-belief and self-determination, and what — if anything — did it teach Stan Lee about same? It’s a very different type of story than the earlier three issues, but none the less for that.

1:45:53-2:00:51: Fantastic Four #52 introduces the Black Panther (in a story called, of course, “The Black Panther!”) and, as Jeff puts it, ushers in a world of “Psychedelic Afro-Futurism,” and somehow it still comes across as painfully racist. Not as much as the next issue, admittedly, but these two issues are impressive examples of how the best intentions of those laboring under a particularly troublesome mindset/societal outlook are still very much shot through with all those troublesome elements when viewed from more “enlightened” times (Insert sad, bitter joke about how much more enlightened about race we are today.) The T’Challa on show in this debut issue is very different from the one we’ve come to know and love, and that’s discussed for awhile, in between my constant fretting about racism (and pointing out that the Inhumans are back, although they never really went away). Far more fun: Jeff explaining what college is, and why Lee and Kirby get college so very, very wrong.

2:00:52-2:09:12: If you’ve been waiting for the Fantastic Four to be the super team of white privilege, then Fantastic Four #53, “The Way It Began,” is the issue for you! Ben can’t be bothered listening to the Black Panther’s origin story because he’s read Tarzan stories! Sue Storm can’t believe Africa has technology! Do the Wakandans have any true agency in their first appearance, and is it enough to overpower everything that’s distasteful about the issue? For Jeff, the answer is yes, and as I argue against that reading, the sound quality starts to fade, meaning that I pop in and out. Consider it a blessing in disguise, perhaps…? 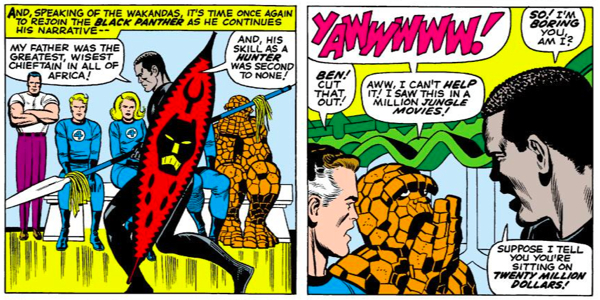 2:09:13-end: We start to talk about FF #54, mostly to continue to talk about the racism in the issue, before taking a powder for reasons of running time and poor call quality. Next time, we’ll talk about #54-60 of the series, matching our impressively lengthy discussions and trying to stay slightly more on-topic. Will we succeed? Who can tell? In the meantime, keep up with us on Tumblr, Twitter and Patreon, and I apologize for sickness meaning I was especially lax with the Tumblring and the written post last week. Those of you with access to the Patreon supporter grab bag will, at least, get to know why in horrifying detail. We’ll be back with another Baxter Building in a month, but before then, another Wait, What? in two weeks. Miss them never, true believers.