Previously on Baxter Building: The old order changeth! Sue Richards has left the team — and her husband! (Feminism is to blame, and certainly not Reed Richards’ offensively paternal attitude, oh no.) She’s been replaced by Medusa, because one of the rules of the FF is that, when Sue goes, an Inhuman has to take her place. Meanwhile, Johnny Storm is reconsidering his life choices after breaking up with Crystal, Reed Richards is sinking into as much of a depression as superheroes could in comics from 1973, and Ben Grimm is… well, just being Ben Grimm. The world’s greatest comic magazine? More like the world’s soapiest soap opera, am I right? 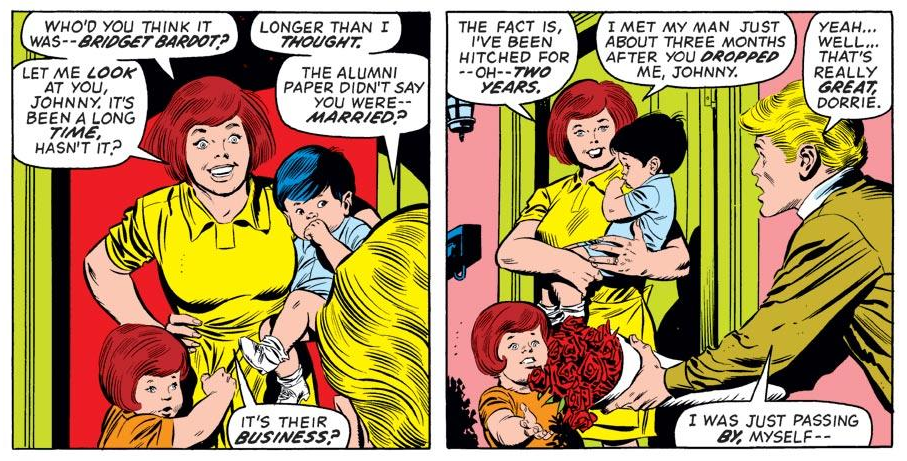 0:00:00-0:11:36: “Jeff is much more positive than either of us feel about these issues,” I say about Fantastic Four #134-146, issues I describe by saying “some of these are just not very good comic books,” even though Jeff says that some of his favorite comics are in these batch (He’s talking about #136-137, as you’ll find out). Is that because he grew up reading them? We discuss, with references to Steve Englehart’s Avengers, Gerry Conway’s Amazing Spider-Man and how children are willing to accept bad writing as genuine emotional content because they don’t know better. Also, what is “Star Trek Syndrome”? Jeff explains! 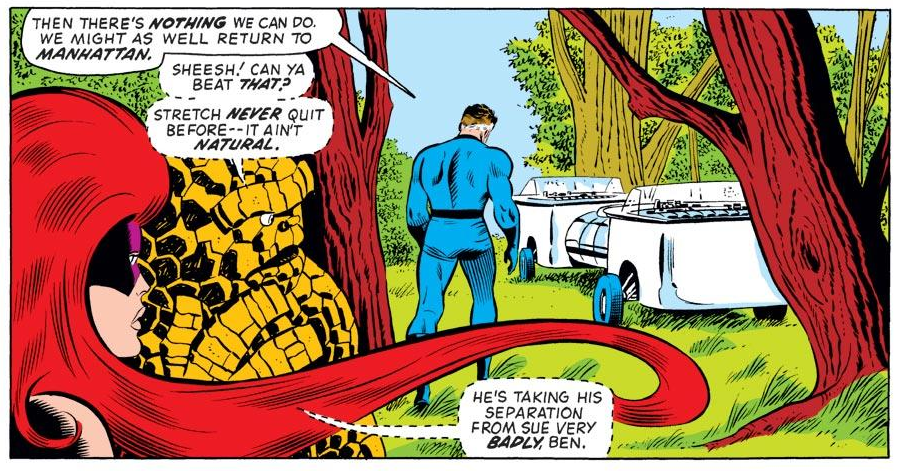 0:11:37-0:28:29: Fantastic Four #134-135 launch the awkward nostalgiafest that is Gerry Conway’s run as writer (Yes, he scripted the previous issue, but that was from a Roy Thomas plot; this is Conway flying solo for the first time). Marvel at my ability to accidentally mash-up Fantastic Four and Scott Pilgrim, which is arguably more entertaining than the two issues that make up this storyline because who wanted to see Gregory Gideon and Dragon Man again? We talk about bad nostalgia, and the way that that nostalgia is almost subverted by good character work on Conway’s behalf — except where Franklin Richards is concerned. But, oh, that Johnny scene with Dorrie… 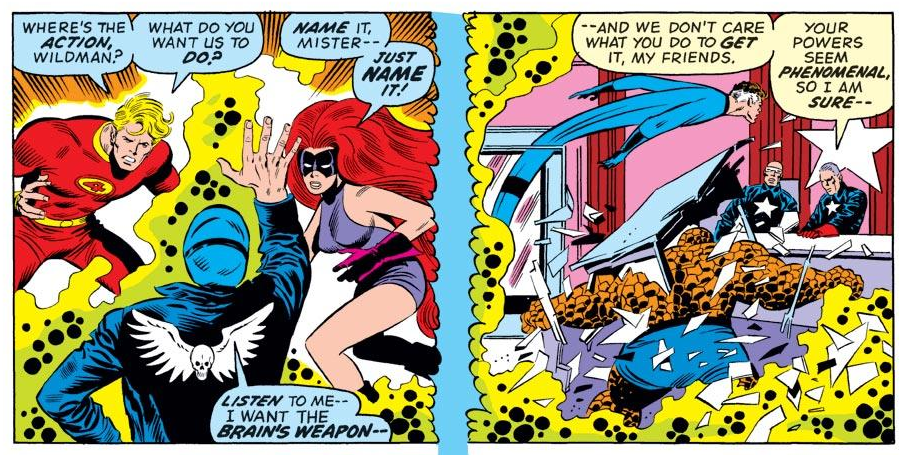 0:28:30-0:51:15: According to Jeff, FF #136-137 are “practically Grant Morrison levels of insanity,” although he then corrects himself by saying that maybe he means Mark Millar. The esteemed Mr. Lester attempts to summarize “Rock Around The Cosmos!” but we immediately sidetrack ourselves in a discussion about the portrayal of Medusa versus Crystal or Sue Storm, the potential for this storyline being a Venture Bros. episode and Jeff’s unexpected — even by him — fandom for the Shaper of Worlds, and the metatext that he gives this particular era of Fantastic Four. (How self-aware is Roy Thomas, anyway?) Oh, but that’s before we even get to the exciting, surreal antagonists of this storyline, who look like this: 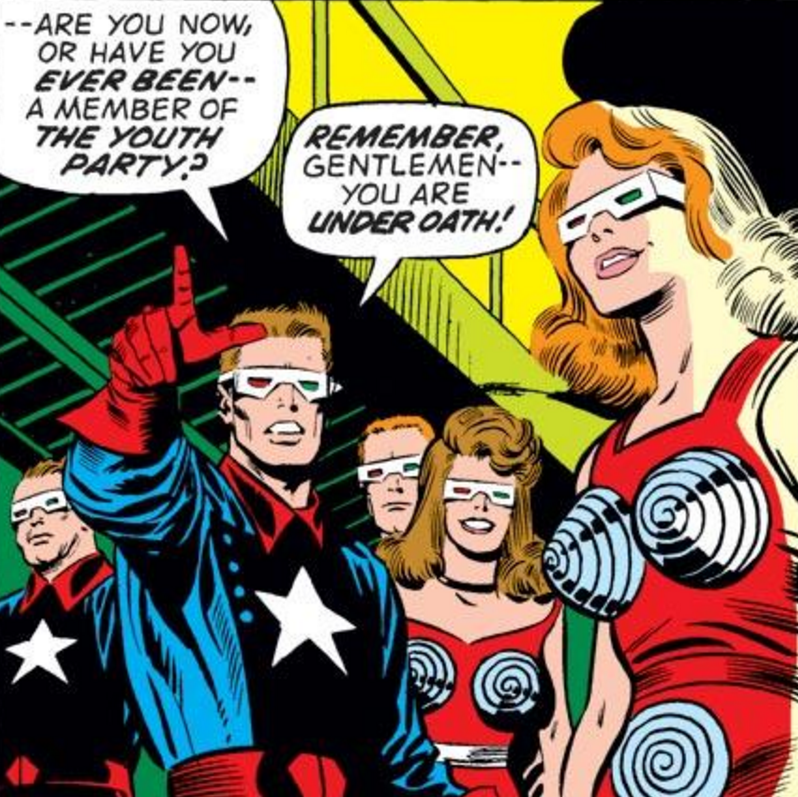 Oh, yes. And that’s before we get to the wonderfully racist anti-racism message and the possibility of one of Oakland’s favorite sons showing up as the villain of the story. All this, plus a panel that might predict Tarantino’s Kill Bill and the surprising creepiness of the cliffhanger of #136.
0:51:16-1:10:58: Help us, Whatnauts: is this opening page of #137 a reference to something that neither of us recognized? Both Jeff and I are sure that it is, purely because of the rendering used, but we couldn’t even guess at what beyond Jeff’s EC suggestion. 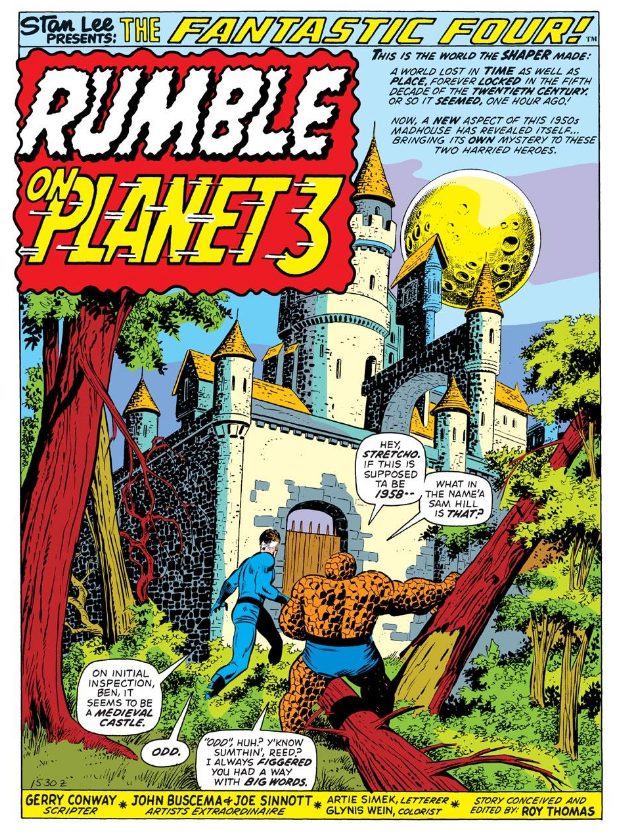 Meanwhile, the FF are at war with each other thanks to some brainwashing, but that only lasts until the introduction of Warhead, whom Jeff recognizes as Robot Monster, which… can we talk about Robot Monster for a second? Look at this:

That is amazing. I mean, amazing — and, yes, the monster really is Warhead in this story, weirdly. I guess it’s period specific…? But we shouldn’t get too distracted by that because there’s some well-meaning racism at play because it’s the 1970s, ya dig? Sorry, there I go with the slang of the sixties again…! Face it, buster. It really is the most Star Trek issue of Fantastic Four yet, and that’s including those late Kirby ones which literally rip off the plot from “A Piece of the Action.” But does it actually work?

1:10:59-1:27:55: Hey, everyone! Fantastic Four #138-139 brings back Wyatt Wingfoot, even if he’s more of a background player than ever before. But he’s back nonetheless! He’s back to graduate from college and act as a living Macguffin to bring the Miracle Man back into the lives of the Fantastic Four, which is… well, we all could have done without this. Also discussed: Flame toupees! More well-meaning racism! Jeff accidentally conjuring the idea of Ben Grimm as Donald Trump! 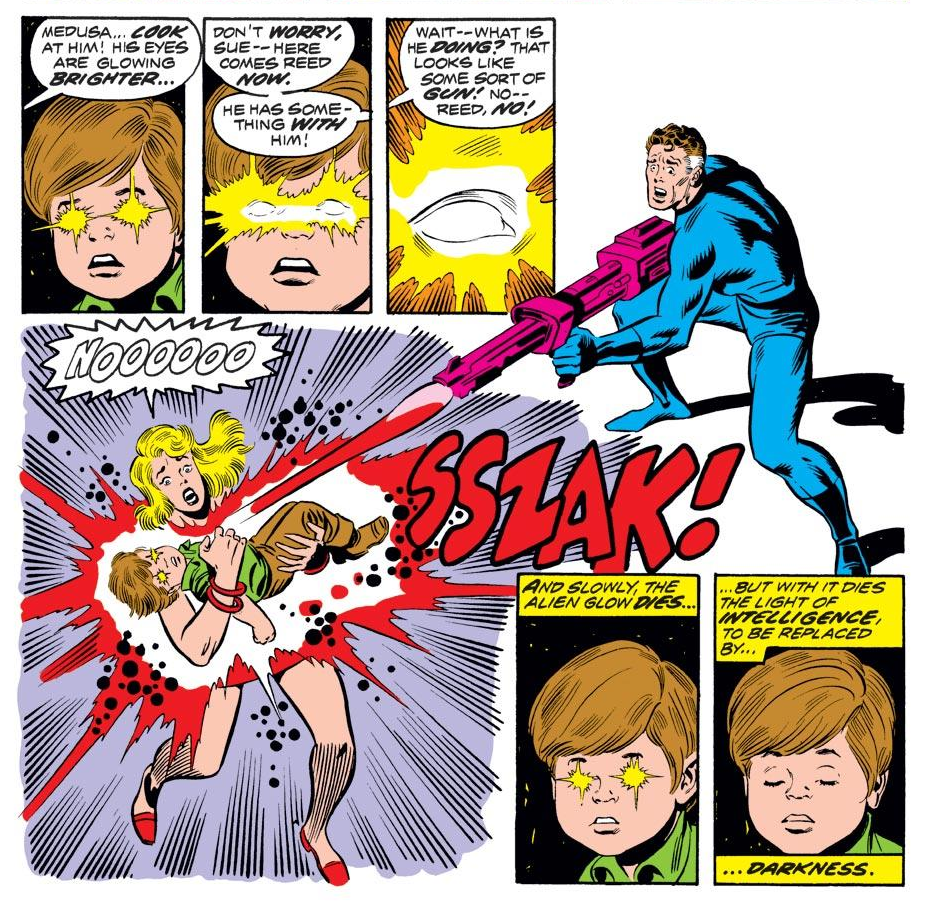 1:27:56-1:46:41: All things Franklin come to a head with FF #140-141, the latter of which proclaims “The End of the Fantastic Four!” But before we get there, we get the return of Annihilus — disappointing to Jeff, even though we get his origin as a nerd alien insect who was bullied by the jock alien insect — and the chance to talk about how John Buscema’s art has changed for the better across his Fantastic Four run (These are his last issues for awhile). Also, what gets Jeff going? Apparently the sight of Reed Richards shooting his kid with a massive gun. No, really: “It’s kind of great, you get to see Reed Richards shoot his kid with a big gun,” he says. Who knew that would be Jeff’s thing? Still, it does lead to some good character work, which really is Conway’s strength in these issues, so let’s just accept it all and move on.

1:46:42-2:16:36: We move straight into Fantastic Four #142-144, which sees Rich Buckler arrive on art and bring a less subtle, and definitely more Kirby-inspired look to the book. (Really, #143 is filled with Kirby swipes.) It also sees the return of Doctor Doom, the arrival of Darkoth the Death Demon — who, as Jeff points out, feels like a strange dry-run for Deathlok in some ways — and the idea of curing Alicia’s blindness. We end up talking briefly about why the latter bothers me both as a general concept and specifically when it comes to Alicia, and also about the Medusa/Reed relationship both as it appears in the text and in the subtext of the issue, and how it affects the general reading of Medusa in these stories. Also! Is Johnny losing it? Does Gerry Conway really, really have issues about being bullied at schools? What happened to Darkoth’s tail? And what the hell happened to the pacing in this storyline? Oh, and this panel:

Really, no-one thought they should perhaps redraw that panel?
2:16:37-2:26:53: Jeff calls FF #145-146 “somehow a fill-in issue that became two fill-in issues,” and he’s not wrong; not only does it feature guest art by Ross Andru (again, not being served to well by Joe Sinnott’s inks) but it feels very disconnected from everything else that’s been going on in this run to date, being essentially a Johnny/Medusa issue of Marvel Team-Up that ended up in FF because of an extended Thing cameo. On the plus side, we do get to talk about Marvel’s institutional love of all Asian men being wise old ancient ones in their own right, so there’s that. (There’s honestly not much else going for these issues, sorry.) 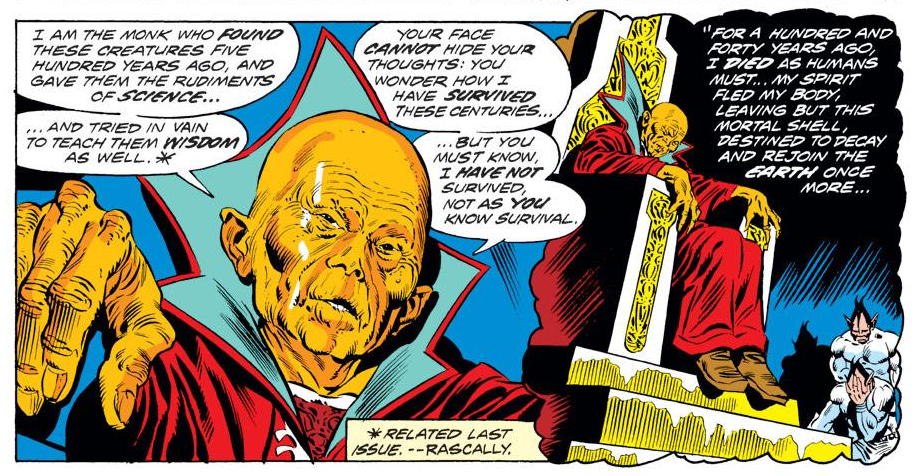 2:26:54-end: We wrap things up looking back over these 13 issues and wondering what the reason was for the swing towards nostalgia, while also planning our next adventure into this part of the Marvel Universe: next time out, we’ll be covering Fantastic Four #147-159, wrapping up the current era of the book — finally, we’ll get to a conclusion of the Sue/Reed split plot! — and trying to do so in a slightly shorter time frame than this episode. Maybe. Possibly. For those who want to find us elsewhere, we remain available on Twitter, Tumblr and Patreon, and otherwise, we beseech you to return in one month for more Baxter Building or just one week for more Wait, What?. Thank you, as ever, for listening and reading.