Previously on Baxter Building: Just when all seemed lost, Archie Goodwin saved the day by stepping in as guest-writer on the series in mid-storyline and demonstrated that there was life in the Fantastic Four yet — mostly by turning Reed Richards into a temporary threat and bringing Doctor Doom back to be awesome. But with Stan Lee’s return just around the corner, can the quality level remain this high?

0:00:00-0:06:59: To begin the episode, a cold open that actually comes from our post-show conversation about where we first read these comics — Marvel UK reprint talk, ahoy! The book I talk about is this one, for those curious — and the idea of “jumping-on points” for new readers. Includes special meta-moment where Jeff suggests we make it the cold open!
0:07:00-0:08:42: The very little introductory to-do lets you know that we’re going through Fantastic Four #119-126 this time around, except that’s very much a lie — we only get through #125, because get caught up in the first issue far more than either of us expected. Sorry, those who hoped we’d get into the first issue of Roy Thomas’ run.

0:08:43-0:30:05: And talking of Roy Thomas, Fantastic Four #119 is, I say, “the ultimate preachiest Stan Lee comic that just happens to not be written by Stan Lee.” Yes, Thomas guest-writes this one-off in which the Fantastic Four solve racism, and it’s amazing. Not necessarily in a good way, but, man. But there’s so much more to it than just dealing with 1972 international race relations: Johnny Storm’s weird science! AUNTIE, the robot that demonstrates that Roy Thomas doesn’t really understand how acronyms work! Other things that Roy Thomas doesn’t really understand how they work (Like the idea of “blood brothers”)! The self-obsessed melodrama of Reed Richards! The unusual prevalence of skyjackings in the 1970s!

0:30:06-0:55:58: As the Thing and the Human Torch arrive in Fictional Racist Country 1972AD, Jeff compares the way in which the story tries to come to terms with racism with a letter in the same issue from a reader who suggests that the Thing would be the ideal character to deal with such issues — let’s just leave it as “perhaps they had the best of intentions, but the reality didn’t necessarily live up to them.” Oh, and we get to meet the Black Leopard, because T’Challa’s changed his name in this issue because of a combination of not wanting to upset White America and, as Jeff puts it, “one of Roy Thomas’s ‘Uh, you know, scientifically…!'” Yes, this really is a strangely cautious comic for one that’s trying to make a political stance. But at least there’s a villain called Jeth Robards and an appearance by Klaw, even though Jeff and I both forgot the last quarter of the comic exists. Blame a lot of that on the efforts of Buscema, who manages to make a three-page fight sequence underwhelming, and we have a brief discussion about what’s missing compared with Kirby.

0:55:59-1:15:12: FF #120 begins what Jeff calls “yet another swan song for Stan Lee,” as “The Man” returns for six issues to utterly sully his legacy on the title. If you’ve ever thought to yourself, “I wish that rumor about Jack Kirby doing Galactus as God was true,” then get ready to meet Gabriel — the all-powerful threat who’ll make you wish you had read the Bible more closely! But before we get to him, we have to grapple with men with pillow cases storming the Baxter Building, and the question of whether or not the Fantastic Four needs its own J. Jonah Jameson (It doesn’t).

1:15:13-1:32:32: If your favorite part of the Overmind arc was that the world turned against the FF, get ready: it’s back in Fantastic Four #121 because an angel told them to do it. What’s that, you say? Why would an angel come to Earth to tell people to beat up the Fantastic Four? Oh, that’s just one of the logic problems in this astonishingly underwhelming, disappointing issue that undersells its own highlights in its desire to fit a particular format. But don’t worry — there’s the additional star power of the Silver Surfer and Galactus to try and distract you from the many problems on show here. Spoiler: it doesn’t work. This is what happens when Stan Lee tries to outdo a rumor about his earlier stuff. 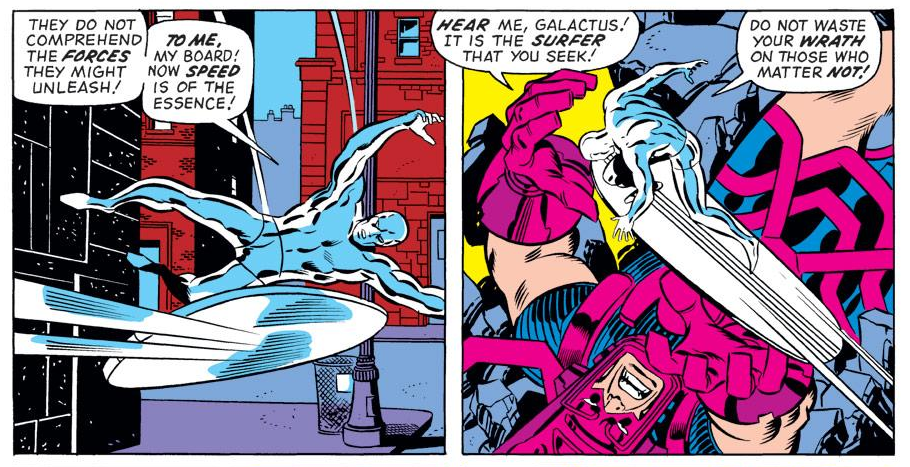 1:32:33-1:42:49: Buscema’s layouts in FF #122 bring us back to conversations about the nine and six panel grids and why they don’t work as well as, say, Kirby’s 6-panel pages or Dave Gibbons’ 9-panel pages on Watchmen. It’s arguably the most interesting thing about the issue, because the rest of the issue relies on an idea that manages to make both Galactus and Reed Richards seem smaller and less capable and awesome (in the old-fashioned sense of the term): that Galactus can be easily distracted by someone stealing his spaceship.

1:42:50-1:55:40: It says a lot about Fantastic Four #123 that we get far more excited about the appearance of Richard Nixon than anything else. “I think it’s hilarious that Reed Richards is talking to the President into his crotch,” Jeff says at one point, in a comment that’s so much more enjoyable out of context, and is far more interesting than anything that’s actually in the comic itself. We unpack the appeal of including Nixon in the comic, and also just why Reed Richards’ cunning plan is bullshit and impressively bigoted against everyone living in the Negative Zone. Jeff, meanwhile, invokes Harlan Ellison in explaining the failures of Stan Lee in his latter years, especially where the Silver Surfer is concerned. And yet, this really isn’t as bad as it gets, because…

1:55:41-2:09:04: We end up taking FF #124 and 125 as one unit, because they’re an especially light two-parter that sees the return of the Monster From The Lost Lagoon from back in #97 because nobody demanded it. Yes, Stan Lee’s final issues on the title as the “regular” writer are a retread of one of the most boring issues of the Lee/Kirby run, only slower and dumber. Just how slow and dumb? Well, there’s this sequence: 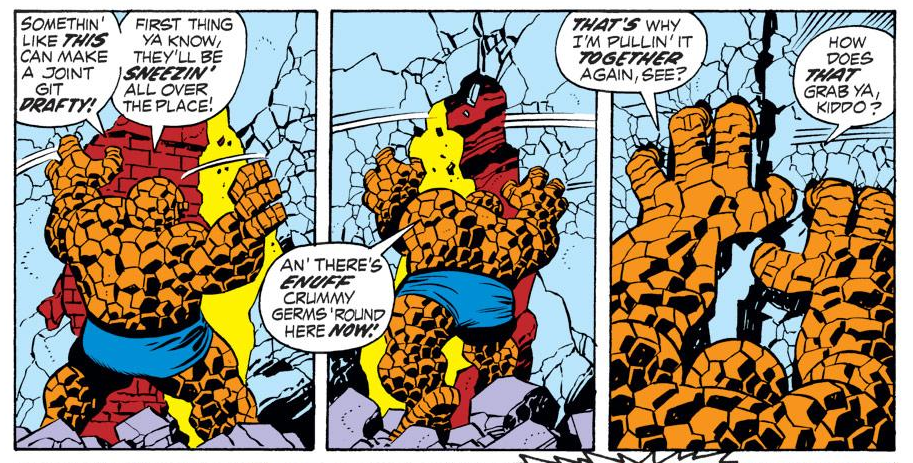 So, yeah. That happened. But, just to sing John Buscema and Joe Sinnott’s praises instead of damning Buscema’s layouts, there’s this sequence in #125 that both Jeff and I loved: 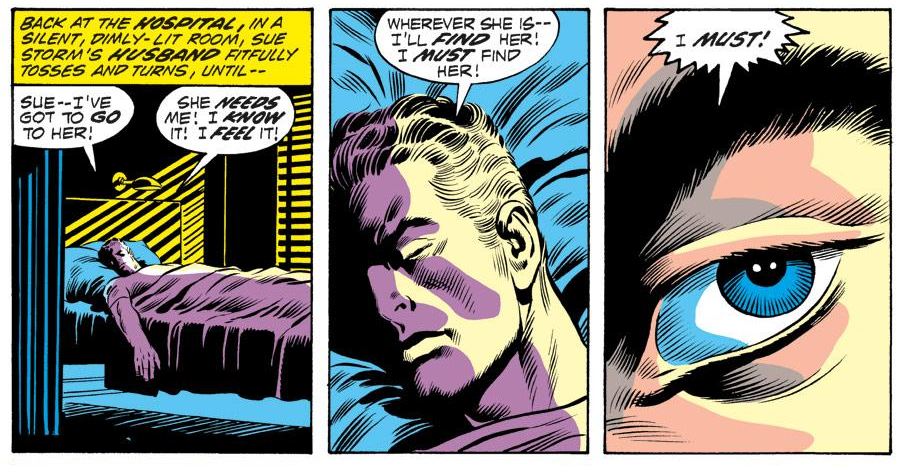 Still, at least everyone involved seems to have realized that things have gone off the rails, there’s a “next issue” tease that, as Jeff points out, promises that things are about to get turned around. Hopefully. (Not that we actually get there this episode — but next time! Honest!)
2:09:05-end: Next time: A New Beginning, apparently, as we take on the brief entirety of Roy Thomas’ (first) run on the series and find out what happens when the series tries to go back to basics. Until then, we’re available on Twitter, Tumblr and Patreon, to tide you over with… good tidings…? Okay, maybe not so much. But there will be a regular Wait, What? next week right here to make your week start right…! As always, thanks for listening, and reading through the show notes.