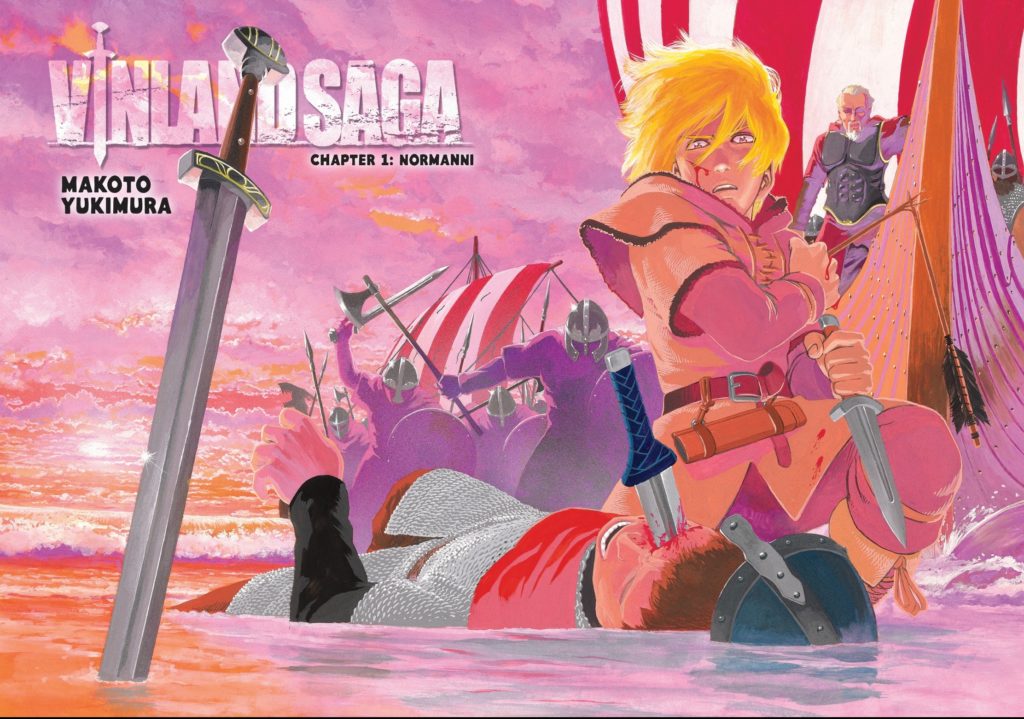 0:01-32:16:  Greetings from the very last “Wait, What?” podcast of the year! Graeme “The Best of” McMillan and Jeff “The Rest of” Lester. As the nicknames suggest, we immediately jump into discussing the idea of the Best of 2018 list: Graeme has an in-process list, Jeff doesn’t, and it’s been a damn odd year for it for some reason. We discuss why, and also what Graeme currently has on his list.  Discussed: Martian Manhunter #1, Bitter Root #1, Goddess Mode #1, the joys of serialization, Bryan Lee O’Malley’s Seconds, whether or not Marvel should do a Daredevil: Season 4 comic; what happened to the Netflix-Marvel deal; spoilers for the finale of s2 of Iron Fist at 20:29 to 20:44); the sales of Marvel’s digital first comics; Marvel’s recent selection of back titles on Marvel Unlimited; Agents of SHIELD makes it to a seventh season, somehow; what the fuck happened with The Inhumans, including The Death of the Inhumans; and more. 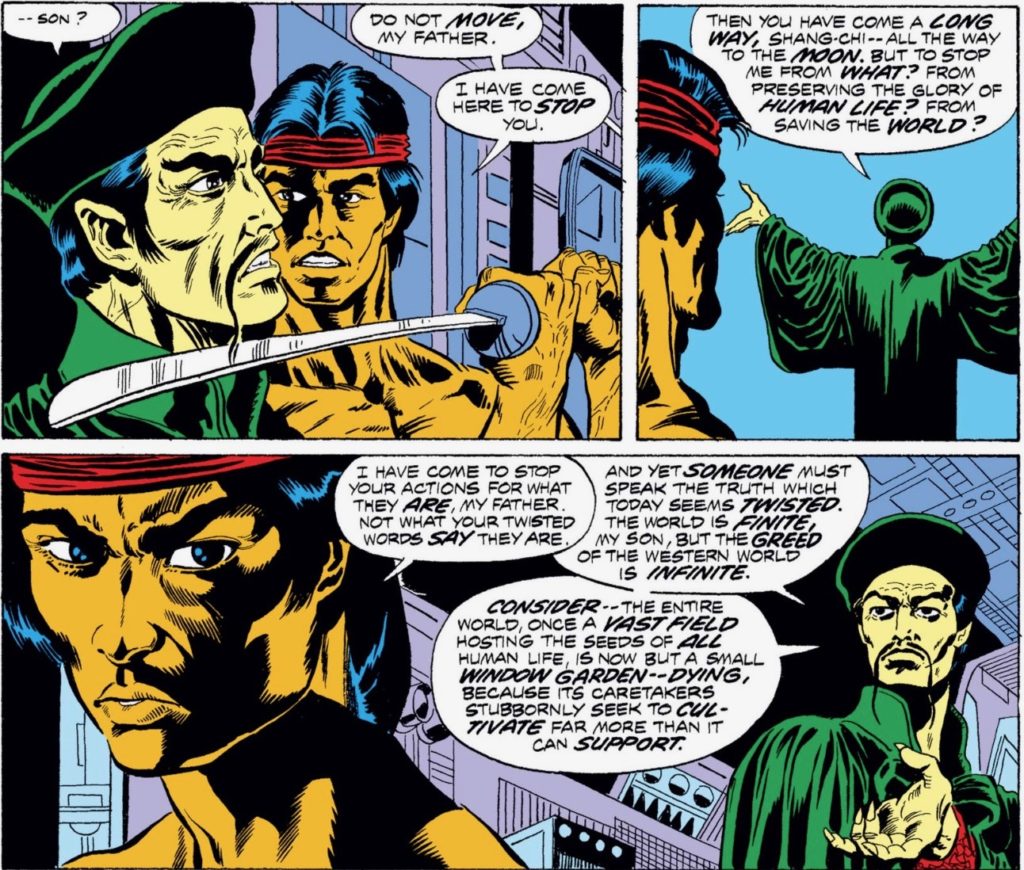 32:16-44:44: Section break just in case you need to get your bearings, and also because we linger on this topic for a bit:  there’s been “a report” that a screenwriter is working on adapting Master of Kung-Fu.  Is Jeff excited? Nonplussed?  Halfplussed? We talk it all out.
44:44-56:24: The discussion of MOKF causes Jeff to ask in turn for for Graeme’s feeling about the Bright Burn trailer.  “What’s the Bright Burn trailer?” Graeme asks, so Jeff makes him watch it during the podcast so we can talk about it [Graeme’s real-time reactions edited for length].  Discussed: Bright Burn (which Jeff keeps calling “Bright Born” and still maintains is a better title than Bright Burn).
56:24-1:15:34: Jeff had mentioned earlier there were some news stories he thought we’d be discussing this episode.  What stories were those, Graeme wonders? There was a big announcement of what Shonen Jump is doing starting December 17.  Also discussed: an amazing story from Graeme about Doomsday Clock #8, but the bulk of it is us talking about the Shonen Jump deal, what the expectations are, and who is the deal for, and some other consideration that won’t end in a preposition and make me uncomfortable. 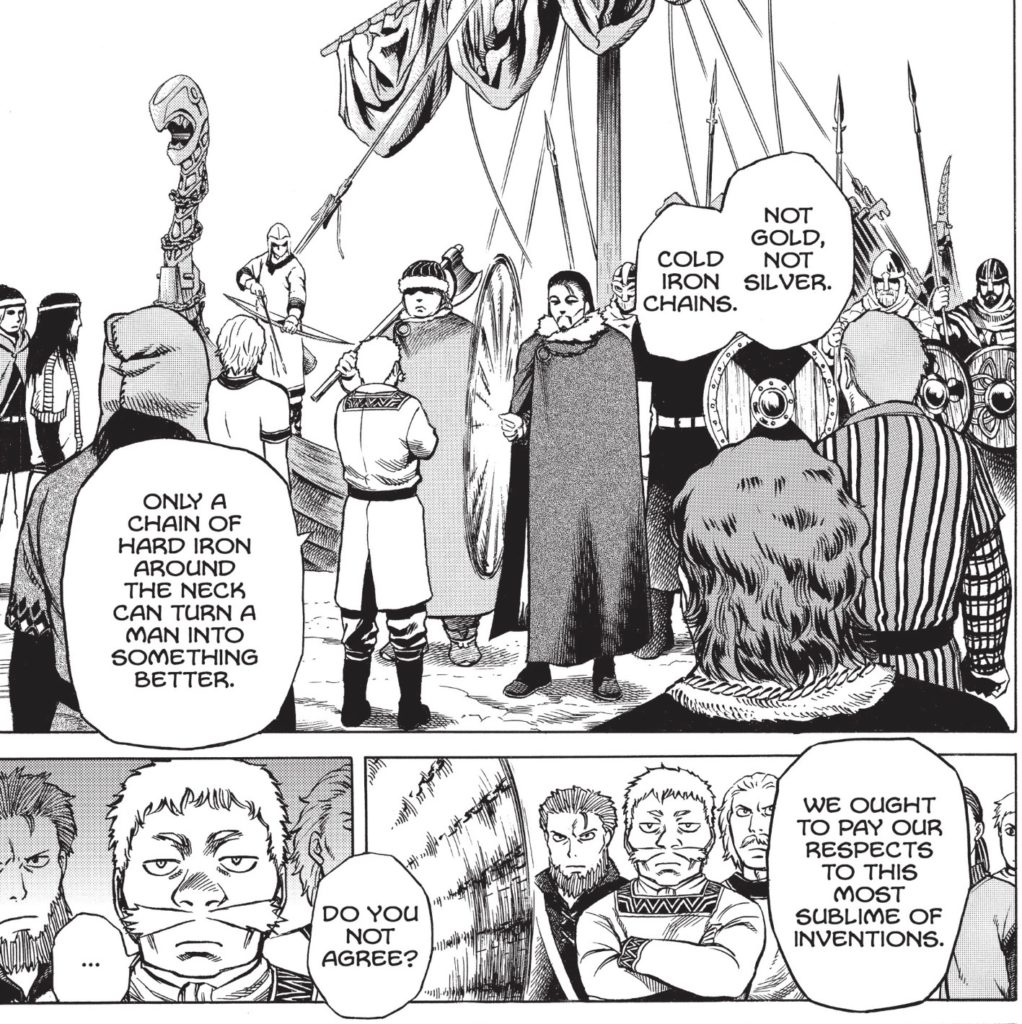 1:15:34-1:33:06: We expand the discussion about the new Shonen Jump to have a larger discussion about other comix streaming services currently available in the U.S.  Who’s the audience for Marvel Unlimited?  Who’s the audience for Comxology Unlimited? What’s the real DC Unlimited service?  And how much does Jeff actually use the streaming services he subscribes to?  That last question is a potentially very embarrassing can of worms for Jeff, but on the upside it does allow him to talk about the first volume of Vinland Saga by Makoto Yukimura, which really is as good as everybody says, and which Kodansha is offering the whole first volume of on Comixology Unlimited.  Also discussed: the Hit Reblog anthology on Comixology Unlimited; what comics are on the DC Universe app; and more. 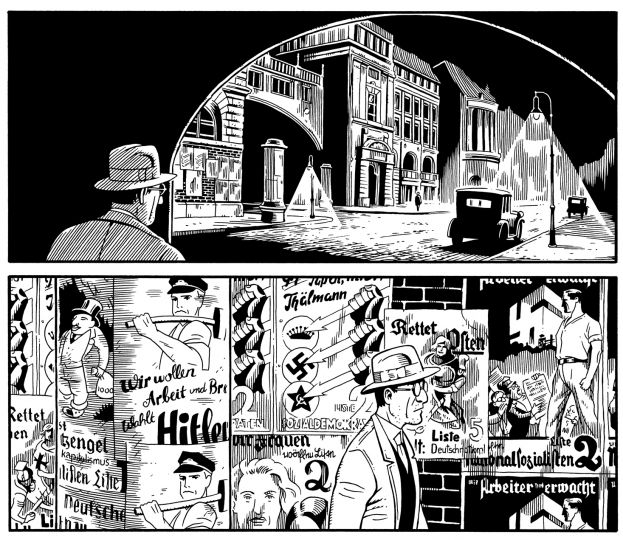 1:33:06-1:49:49: Comics that we are reading!  This is a thing we occasionally talk about on our comics podcast!  And in case you were wondering, this is where Graeme finally gets a chance to break out that incomplete list of the year’s best books, so it’s worth paying attention to this part, probably?  Discussed and/or listed:  Brazen by Penelope Bagieu; Woman World by Aminder Dhaliwal; Berlin by Jason Lutes; Mister Miracle by Tom King and Mitch Gerads; The Immortal Hulk by Al Ewing, Joe Bennett and others; My Boyfriend is a Bear by Pamela Ribon and Cat Farris; Sabrina by Nick Drnaso (which features a longer discussion between Jeff and Graeme); Judge Dredd: The Small House, by Rob Williams and Henry Flint and just wrapped in 2000 AD; Prism Stalker by Sloane Leong; and (honorable mention) Justice League by Scott Snyder, Jorge Jimenez, and others.
1:49:49-1:54:5o: The mention of Justice League and how, while not being the best book of the year may well be the most improved, leads Graeme to talk about the new Uncanny X-Men series which Graeme describes as “astonishingly bad.”  And also, because I’m too lazy to make this a separate entry, Graeme also discusses the first issue of Shazam! by Geoff Johns, Dale Eaglesham, and Mayo “SEN” Naito. 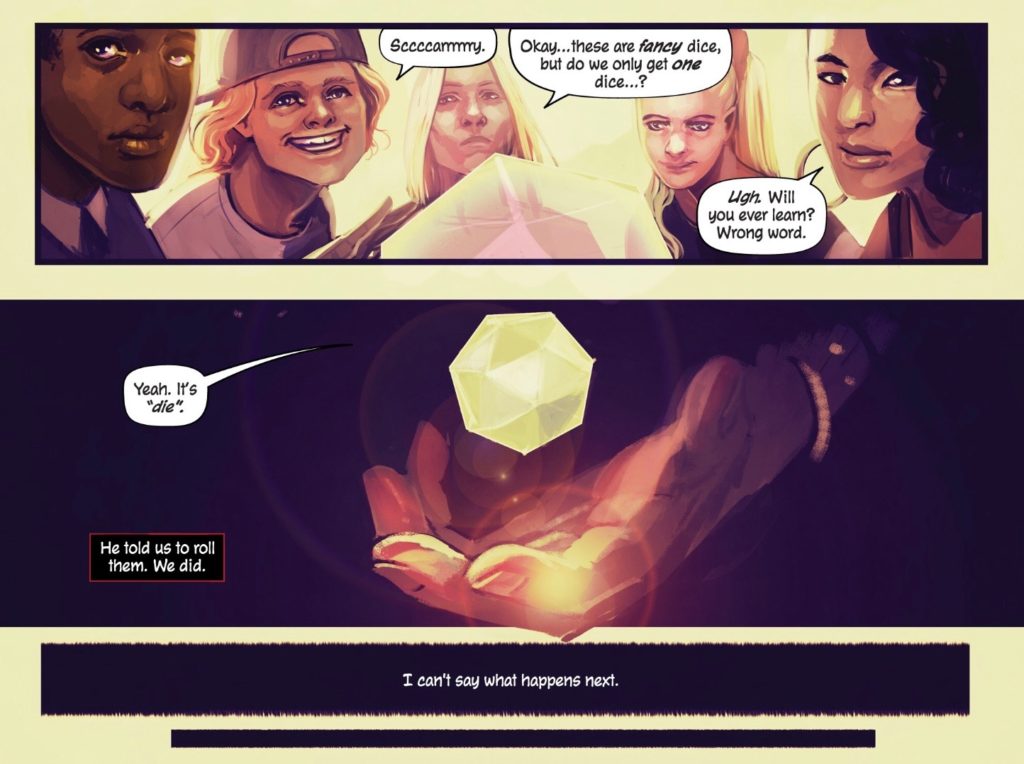 1:54:5o-2:03:48: And then Jeff just talks about stuff he’s been reading, most of which is far from the best (and some of which, like volumes 21-27 of S&M by Mio Murao is just inexcusable). Discussed: Vinland Saga again; Die #1 by Kieron Gillen and Stephanie Hans; and others I think I’m too tired to link to, although some of them deserve it. 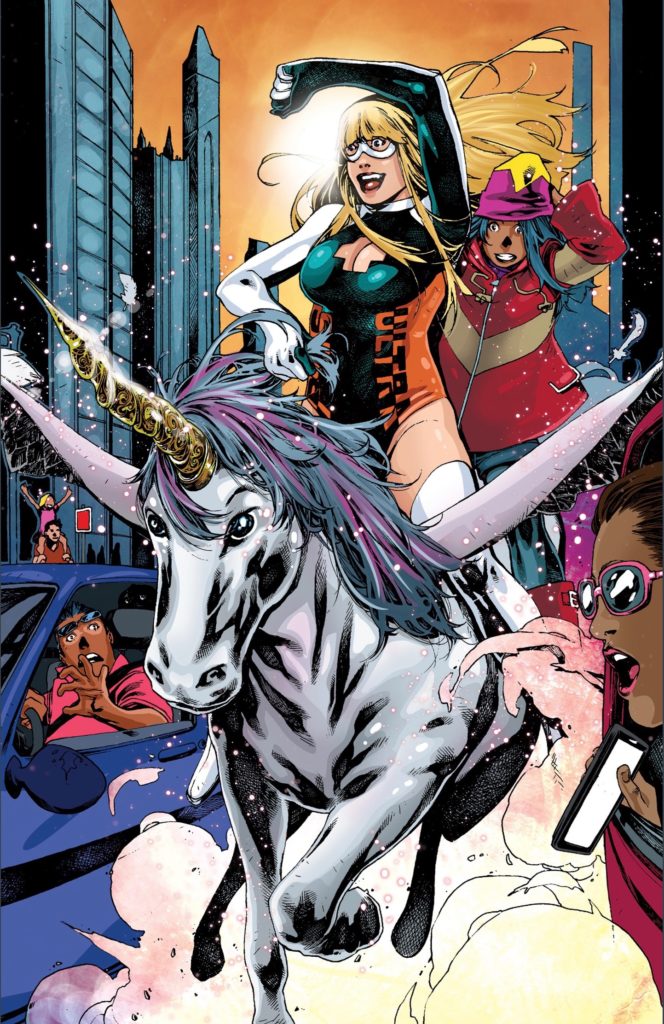 2:03:48-2:35:44:  Are we through yet? No, not yet!  A listener sent us the first seven issues of Plus Ultra by Jon Hughes and Matthew Weldon, and so we dig into this comic series about a superheroine dealing with supervillians and self-identity even as her creators deal with telling superhero stories, engaging in worldbuilding, and injecting ideas about self-identity into a comic book story with only so many panels, so many captions, so many scenes in any given issue.
2:35:44-2:41:49: Closing comments? Nope, psych!  We end up talking a bit about Dan Slott’s Fantastic Four and recording plans for our final episode of Baxter Building!
2:41:49-end: Closing comments–for real this time! Look for us on  Stitcher! Itunes! Instagram! Twitter together and separately: Graeme and Jeff! Matt! Tumblr, and  on Patreon where a wonderful group of people make this all possible, including the kind crew at American Ninth Art Studios and Empress Audrey, Queen of the Galaxy, to whom we are especially grateful for their continuing support of this podcast.  And then we’re out!
NEXT WEEK:  Baxter Building Episode 50! The conclusion of Volume 1 of The Fantastic Four.  Join us!

http://theworkingdraft.com/media/podcasts2/BaxterBuildingEp49.mp3 Previously on Baxter Building: As Jeff and I prepare to finish up the series — the next episode of Baxter Building may be the final one! — we double back in time to take…

http://theworkingdraft.com/media/podcasts2/BaxterBuildingEp48.mp3 Previously on Baxter Building: Was there ever life before Tom DeFalco and Paul Ryan’s Fantastic Four run? By this point, it’s genuinely hard to remember what this comic used to be like, but I’m…

http://theworkingdraft.com/media/podcasts2/BaxterBuildingEp47.mp3 Previously on Baxter Building: It’s all change with the World’s Greatest Comic Magazine with the issues we’re covering, and not just because there is no way to describe the Fantastic Four era we’re reading…

http://theworkingdraft.com/media/podcasts2/BaxterBuildingEp46.mp3 Previously on Baxter Building: I could make reference to just how bad the Tom DeFalco/Paul Ryan run has become by this point — trust me, both Jeff and I will do so many times…

http://theworkingdraft.com/media/podcasts2/BaxterBuildingEp45.mp3 Previously on Baxter Building: When we last left off — in the same recording session! — the Thing has discovered an all-new reason to feel self-pity, Sue Richards has turned so almost-evil that it’s…

http://theworkingdraft.com/media/podcasts2/BaxterBuildingEp44.mp3 Previously on Baxter Building: The super-team that defined the 1960s has reached the 1990s, and it’s not necessarily the best combination; Tom DeFalco and Paul Ryan are trying to bring Marvel’s First Family up…

http://theworkingdraft.com/media/podcasts2/BaxterBuildingEp43.mp3 Previously on Baxter Building: The beginning of the Tom DeFalco/Paul Ryan run took Jeff and I by surprise by being… not absolutely terrible…? By far the most traditional* take on the team in quite…

http://theworkingdraft.com/media/podcasts2/BaxterBuildingEp42.mp3 Previously on Baxter Building: When we last saw the FF — ignoring a fill-in by Al Milgrom — they’d just returned from a time-traveling adventure that returned the team to the classic line-up for…