Previously on Baxter Building: Which was the more important event that happened in the previous episode: The arrival of George Perez as artist, or Reed Richards losing his super powers? Both cases can be made as we make our way through this mammoth episode, which will only take up a 157 minutes of your time. (We’re sorry. Kind of.)

0:00:00-0:07:31: After a quick check that we’re actually recording, we introduce the issues that we’re covering this episode — Fantastic Four #184-200 — and talk briefly about the fact that I enjoyed them far more than I expected, and certainly more than the issues we covered last episode… and what that might mean. But before too long, we head into the maelstrom of seventeen issues (Well, sixteen; one is a reprint) in one episode. Pray for us. Pray for yourselves. 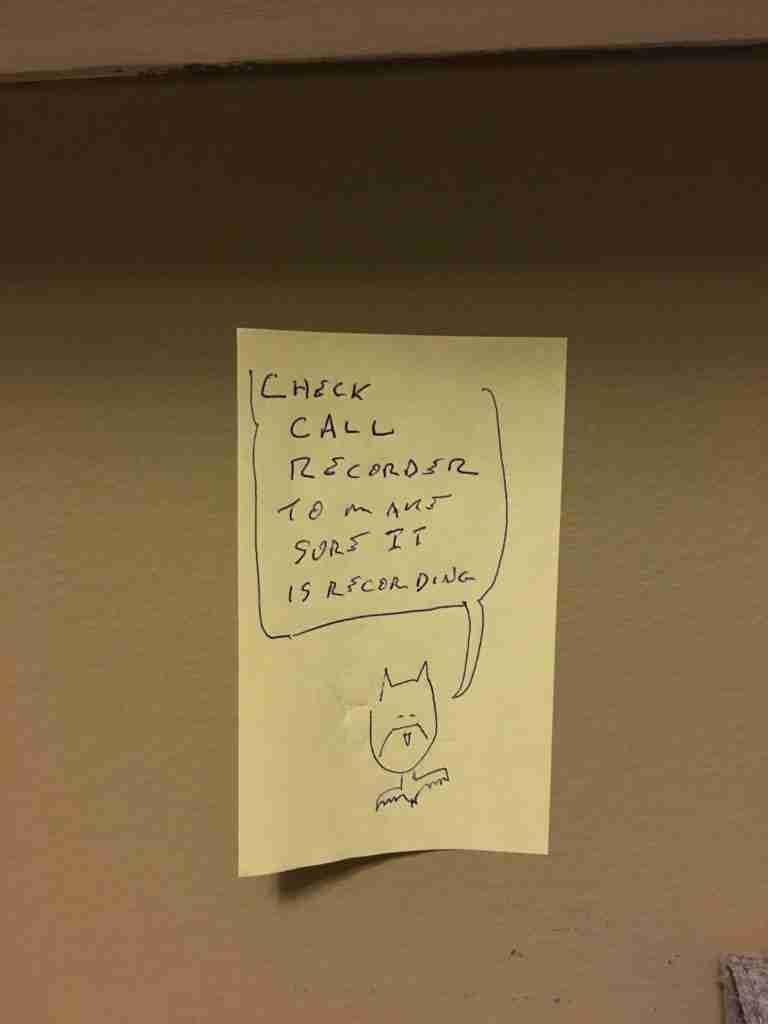 0:07:32-0:38:39: “It’s the storyline everyone’s been waiting for,” I lie, as we dive straight into Fantastic Four #184-186. Let’s face it; does anyone really want an Agatha Harkness-centric storyline, even if it is one that introduces the impressively unsubtly-named “Nicholas Scratch”? Don’t worry, however; we also get into such topics as the value that George Perez brings to the book during this era, as well as the benefit of Len Wein knowing when to shut up and get out of the way of the story; Jeff does a great Ben Grimm impression, and unpacks Reed Richards’ power loss as a metaphor about his shadow self that will continue throughout the entire episode; we once again reference the great Fantastic Four: The Great American Novel; we discuss Agatha Harkness’s love life — and Jeff comes up with the greatest description of Marvel’s Son of Satan series — and I confess my love of Salem’s Seven, while also referring to a quasi-forgotten piece of Kirby ephemera.

0:38:40-0:55:06: Fantastic Four #187 has a genuine wonderful splash page that will make you appreciate Joe Sinnott, and opens up a two-parter that works only if you accept that Reed Richards is actually an idiot without his stretching powers. 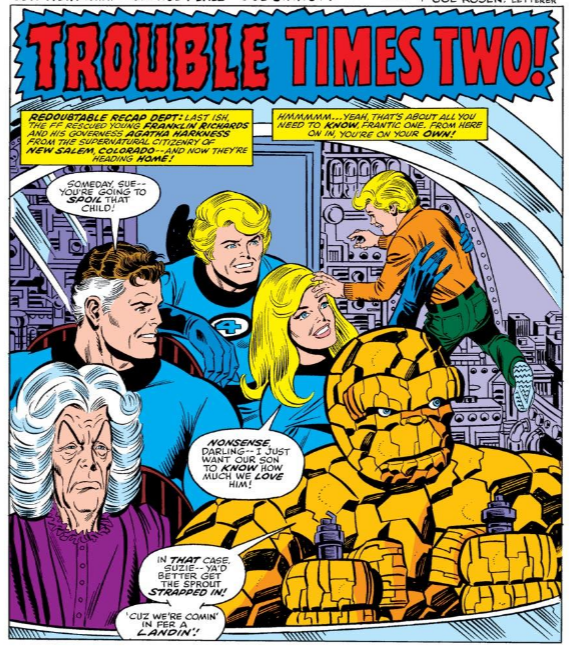 Despite that, we appreciate living buildings, surprisingly bad-ass Reeds — foreshadowing things to come — and a mean Molecule Man, and even the latest break-up of the team, which happens not because of melodramatic fireworks, but, as Jeff puts it, “because this is FF 2.0 [and] people aren’t actually dicks.” All this, and a brief discussion about why John Byrne’s ugly F.F. artwork was a smart move.

0:55:07-0:59:44: From the not-exactly-sublime to the certainly ridiculous, as the book comes face to face with the Dreaded Deadline Doom for not one, but two, subsequent issues: F.F #189 is a reprint of F.F. Annual #4, while F.F. #190 is what I describe as “the most fill-in of any fill-in issue that I think I’ve ever read.” After all, who really wants to read a fill-in team’s recap of random earlier issues of the series? Although, if you’re Jeff, you don’t think they’re entirely random at all… 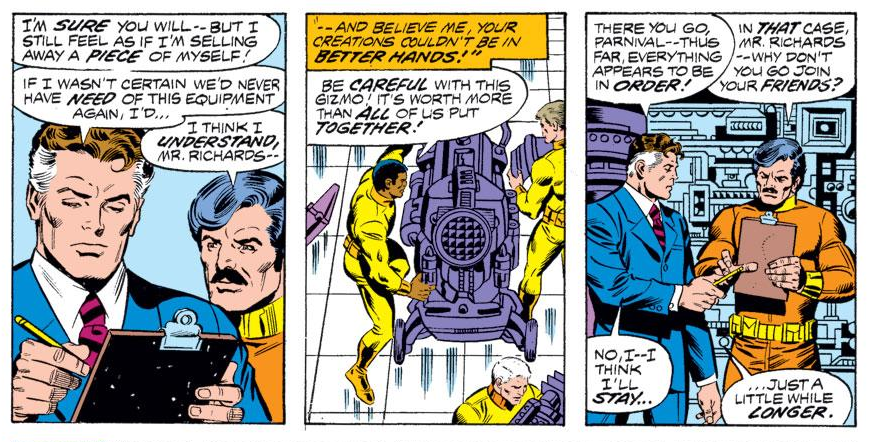 0:59:45-1:05:10: One of the things that Jeff and I both really appreciate about Fantastic Four #191 is the fact that, as Jeff puts it, “it does a great job of giving you what you want but subverting it at the same time.” Such as telling exactly the right “the team has split up but has to come together one more time, showing the need for the F.F. once and for all” story, yet still breaking the group up — and bringing in the Plunderer to help prove the point. We get another glimpse at Reed Richards being the hero of the day without his powers, as well, which is genuinely foreshadowing for what’s to come. Who’d’ve thunk it? 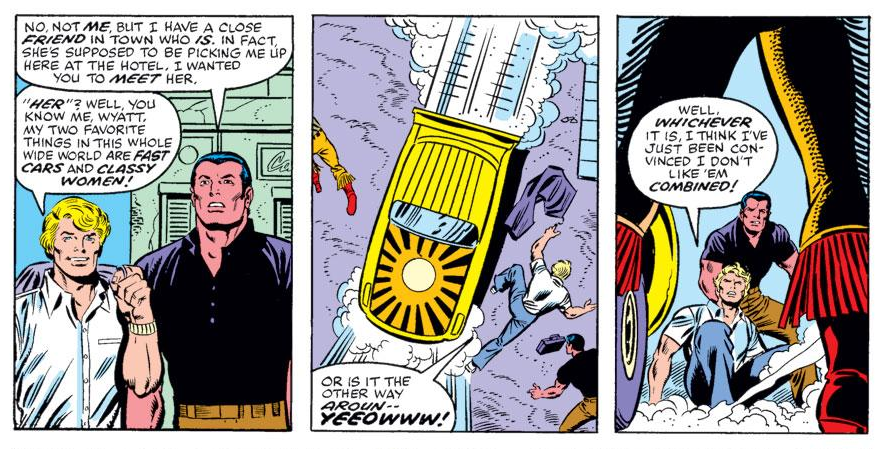 1:05:11-1:16:09: F.F. #192 asks the important questions: How big are cars? How great is Rebecca Rainbow? How much do we love the Texas Twister (especially when he’s the punchline to a surprisingly good whodunnit mystery)? Also! Is Reed a sell-out? How bad are his negotiating skills? Is Ben having an emotional moment with the Yancy Street Gang? But most importantly of all, does Jeff get excited about the idea of Johnny Storm guest-starring in an episode of Speed Racer? The answers to all those questions are genuinely here!

1:16:10-1:32:34: The two-parter that runs through Fantastic Four #193-194 has one of the series’ dullest villains (Sorry, Diablo) and one of its most obscure, as Darkoth the Death-Demon returns to get a new origin that… might even work better than his original origin, while Jeff manages to push me into referencing the BBC TV version of Jonathan Strange and Mr. Norrell, before he wonders aloud whether Darkoth’s new origin means that he falls into the the pitfalls mentioned in this essay. 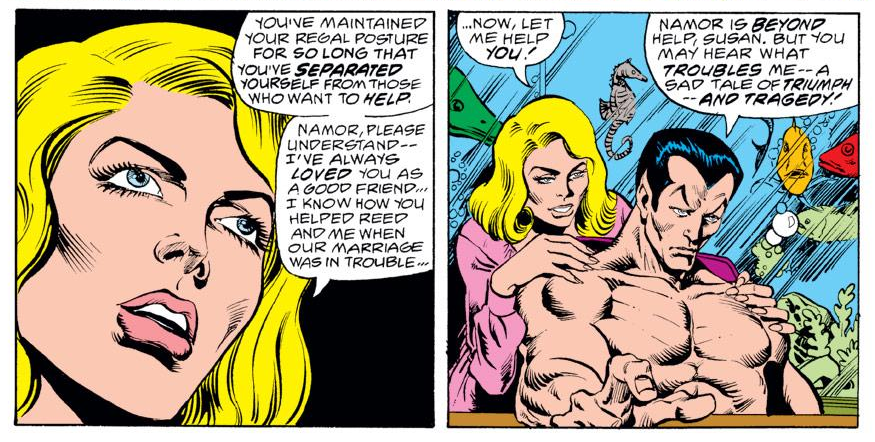 1:32:35-1:39:04: There’s no way around it; Fantastic Four #195, the Sue spotlight issue, is a pretty big disappointment because it’s wasted by turning her into a supporting character in favor of a Namor story that doesn’t even really do much with Namor. Continuing with our Joe Sinnott-lovefest this episode, Jeff and I also find time to complain about the Keith Pollard and Pablo Marcos art, but the issue does give Jeff the excuse to say “hando,” which I haven’t heard in a long, long time. (Also, Jeff is totally into the “Sue is a swinger” theory of comics.)

1:39:05-1:50:54: The team gets back together in F.F #196… kind of. If nothing else, they get back together enough for a Hollywood scene that manages to compare Sue and Johnny to Angie Dickinson and Mark Hamill, and then Ali MacGraw and Shawn Cassidy… who look like this, in case you’re wondering: 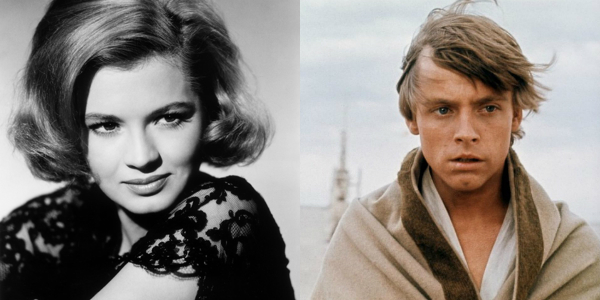 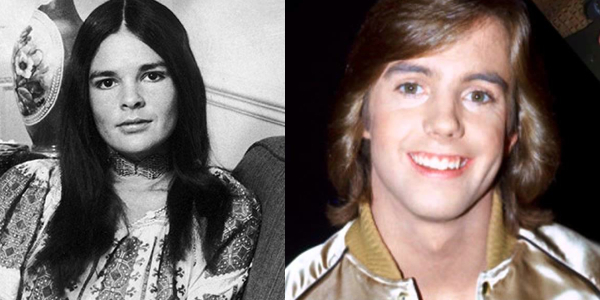 There’s also Reed getting mind controlled again, and the opportunity afforded by me mis-speaking to remind ourselves that we should really cover Fred Hembeck’s Fantastic Four Roast at some point, because it’s great.

1:50:55-2:00:52: Surprised by the odd desperation of announcing that Reed’s powers are back on the cover of #197, Jeff and I end up talking about the length of time that this storyline has been going on, and quite how long Reed has been powerless. We also discuss Alicia Masters and her empathetic sculptor powers, and I come up with the next take on the character for Marvel NOW or whatever follows, and Jeff puts his finger on what stops Doctor Doom being the great man that he so desperately wants to be. 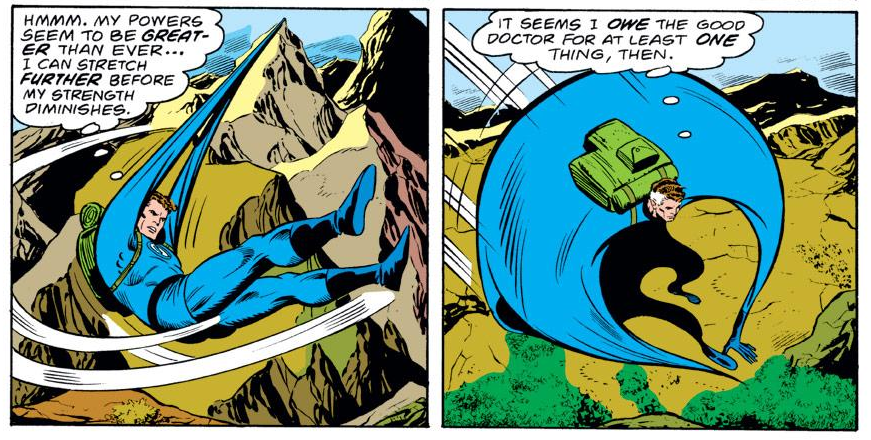 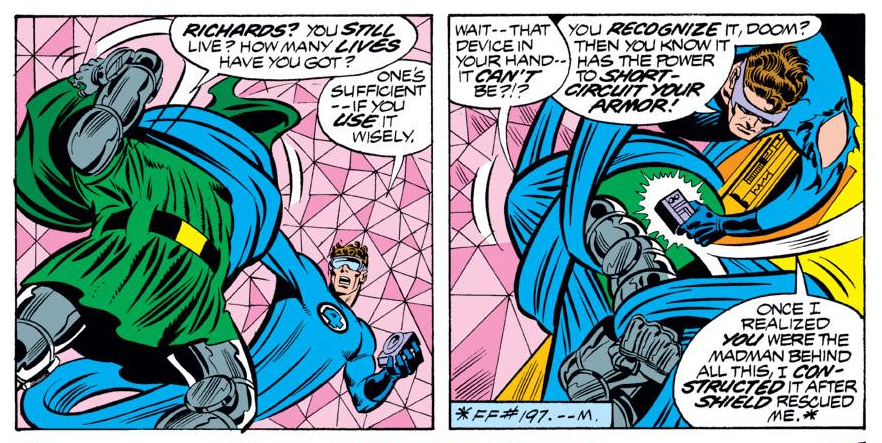 2:07:19-2:19:14: You can tell that F.F #199 is going to be good when it opens with the sheer visual brilliance of Doctor Doom’s sonic keyboard, and it doesn’t let up from there, even when Jeff accidentally steps on the reveal of just who (or what) Victor Von Jr. really is. “You get the camp, and you get the opera — it really does come much, much closer to the stuff I love from Lee and Kirby than you’d expect,” Jeff says about the issue at one point, and that’s even before we mention the meta-textual subtext to the whole thing.

2:19:15-2:30:30: As Mr. Lester puts it, “issue 200 moves like a son of a bitch,” and he’s not wrong. When we’re not getting distracted by the mechanics of Ben and Alicia kissing — no, really, does Ben have to watch how much he opens his mouth? Does Ben even have lips? — we’re admiring the fact that, 200 issues in, Reed and Doom end up having a showdown that somehow works, with the promise of Action Reed finally fulfilled this far into the series, entirely unexpectedly. As if that’s not enough, we realize that this Doctor Doom is Jeff’s core Doctor Doom, and he even admits, “Reed Richards is pretty okay” says Jeff. Coming from a man who generally hates the character, that’s perhaps the highest compliment that can be paid to the issue.
2:30:31-end: As we look ahead to the next few issues, Jeff’s pessimistic streak returns, and then I throw a curveball: next episode, we’re going to be reading Fantastic Four Annual #11-13, as well as Giant-Size Superstars #1 and Giant-Size Fantastic Four #4 (as well as Giant-Size FF #2-3, if we can lay our hands on them.) In the meantime, you can find us on Twitter, Tumblr and Patreon, as usual. To all those who soldier through this epic episode, bless your unstable molecule socks, and may you never have to deal with cloned offspring before your morning coffee.

7 comments on “Baxter Building Ep. 21: “I Do Not Possess Your Outrage… Your Hate… Or Your Insanity!””