Previously on Baxter Building: After four episodes of build-up, we reached what Jeff and I both agreed was “The Good Stuff” with the fifth episode of the podcast, as Joe Sinnott joined Stan Lee and Jack Kirby, and readers met Galactus, the Silver Surfer and the Black Panther within six months of each other. On the minus side, they also met Klaw, but more about him later. 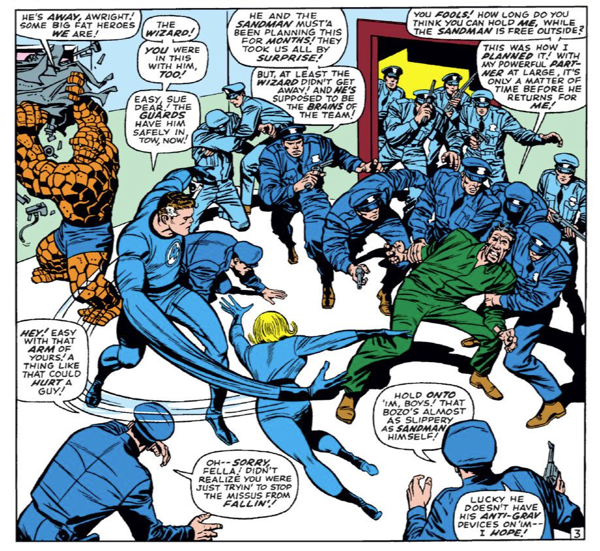 0:00:00-0:08:40: Did we say that we had reached The Good Stuff? Perhaps we were a little too hasty; as we go from Fantastic Four #54-60 (with Fantastic Four Annual #4 in there too), it turns out that we hit a really strange period where the series either loses focus or unsuccessfully tries to shift focus, and goes from a series about four characters who are part of a super-family of adventurers to something where… members of the Fantastic Four happen to be around while other things are happening. Or, in the case of the long-running Inhumans subplot throughout these issues, aren’t around while other things are happening.
0:08:41-0:14:22: The Inhumans attempting to escape the Great Refuge isn’t the only subplot that runs across the issues we’re reading this time around; there’s also Johnny and Wyatt searching for a way to free the Inhumans, and it’s a plot that goes nowhere. Jeff and I discuss the confounding lack of plot development in that subplot, which… spoilers, I guess? But perhaps that’s implied by the entire podcast. Is it a compromise between what Lee and Kirby wanted to do with the book, a la Tales of Asgard in their Thor series, or something else? “Listeners, we’re really going to get to #54 soon,” I say at one point, not having any idea of how wrong I am.
0:14:23-0:17:06: After all, why get to the issues we’re supposed to be talking about, when we can talk about the way that the book has shifted into a very strange narrative model where stories flow between issues somewhat formlessly, even as the multiple running plots are constructed very haphazardly within each individual issue?
0:17:07-0:36:02: Finally, we start with #54, “Whosoever Finds the Evil Eye—!” and find ourselves plunged into an opening sequence that Jeff describes as “elegant” in the ease with which it introduces all of the characters for new readers. It’s a sign of things to come, as we’re heading into a run of issues where the individual sequences work well, but the issues don’t hold together that well as a whole. Considering the issue almost immediately cuts to the Inhumans after introducing the FF, launching a storyline that doesn’t make the most amount of sense, to be polite. Prepare for Jeff to ruin your appreciation of the Inhumans forever, as he makes a very convincing case that they’re actually the world’s greatest white trash family. “It’s basically just them arguing in their trailer park for five issues,” he says, and oh God, he’s so right. Also while Jeff’s making good points, he describes the Black Panther as personifying the “magical negro” trope starting this issue, and he’s not wrong — and, sadly, he’s not exactly alone in that. Poor, abandoned Wyatt Wingfoot and his abandoned mystery. 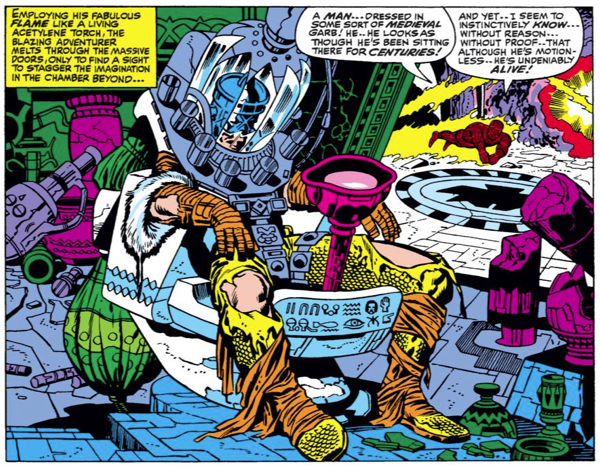 0:36:03-0:50:22: Hey, you know that sequence in Jurassic World where they roll around in that bubble? Look, Jack Kirby invented it almost 50 years ago, before moving into images that are so abstract that Stan Lee had to earn his money with some wonderful exposition. But thankfully, all of that leads to the debut of Prester John, who might have a great first panel but disappoints in almost every other respect, especially when it comes to his purpose in this story. Is that because, as Jeff argues, Kirby is more excited by designing things than telling a story? Also, are the Thing and the Human Torch actually bad guys — or, at least, anti-heroes — when outside the influence of Mr. Fantastic? And, while we’re asking questions, why does this issue fall so flat?
0:50:23-1:04:23: Hey, kids! Remember that we all loved Ben Grimm? What if he was revealed to be even more of a self-obsessed bully than we’d previously thought? FF #55, “When Strikes The Silver Surfer!” delivers the least appealing Thing yet, despite Stan Lee’s attempt to keep things as heroic as possible. Jealous? Cowardly? Spiteful? That’s Ben in this issue, and… yeah. (Unrelated: God knows what happens to my accent when pretending to be Ben’s inner monologue during this. Seriously, I have no idea.) Also: what is wrong with this picture? The answer may surprise Jeff Lester: 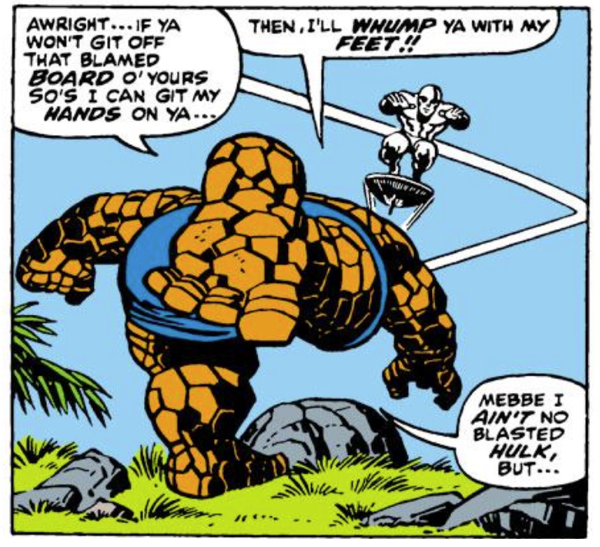 What is more important: Anatomy or the essential Ben Grimmness of his look?
1:04:24-1:16:21: How much of a mess is Fantastic Four Annual #4? Spoiler: Very, but at least it gives us an excuse to talk about Irving Forbush and Not Brand Ecch (To correct something I say on the podcast, the Not Brand Ecch Masterworks collection is actually available later this month.) Honestly, though, that might be the highlight of this issue despite the return of the original Human Torch, because if any Fantastic Four comic by Lee and Kirby ever felt like a contractual obligation, it’s this one. Overactive verbiage, the Mad Thinker’s worst invention ever and there’s still little to be said in favor of this issue. (The Carl Burgos story Jeff refers to can be found here, by the way. Oh, and Here, My Dear, too.) 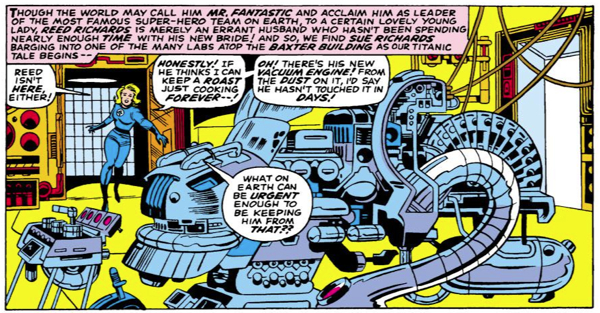 1:16:22-1:36:54: Hey, it’s the return of Klaw! Despite the amazing design of his new look — and it is amazing, one of my favorite Kirby looks — Fantastic Four #56 is a mess, thanks to a story that really doesn’t make any sense when you think about it too hard. But there are some wonderful sound effects (“SPLANG!”), a nonsensical interlude with Wyatt, Johnny and Lockjaw that allows Stan Lee to air his inner racist stereotypes one more time, and a resolution that reminds the reader that the FF would be toast if it wasn’t for the generosity of the Black Panther, we find some stuff to talk about nonetheless. Also, Jeff shares his rewriting of the Inhumans plot from these issues, and it’s a lot better than what’s actually going on. On the plus side, we both agreed that this panel was a thing of beauty: 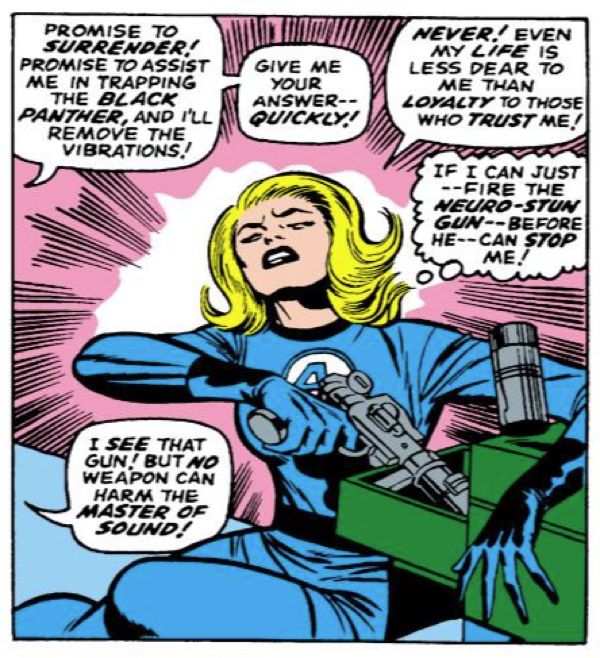 1:36:55-1:50:36: Despite Jeff being unsure about the quality of the next four issues — for entirely reasonable reasons, it has to be said — there’s a lot of greatness to be found in Fantastic Four #57, including some genuinely amazing Kirby/Sinnott artwork and great action sequences with the Sandman. Oh, and Doctor Doom steals the Power Cosmic from the Silver Surfer, launching what might be my favorite Doctor Doom story ever, but Jeff is not convinced, and it’s all down to a difference in the way we see the character. Latverian politics and character flaws are discussed! Jeff tries to convince me that Jack Kirby is subtweeting Stan Lee in the plot lines again! A piece of comic book trivia entirely unrelated to the Fantastic Four is clarified! Really, it’s all here, true believers! 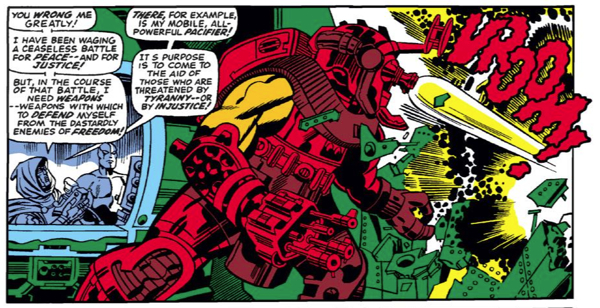 1:50:37-2:04:59: With Doctor Doom now more powerful than ever before, what do you think he does? If you guessed “Made it rain in New York City,” then congratulations; you’re just as mundane as Doom. With Lee and Kirby trying to avoid the obvious “Hey, Doctor Doom could literally just kill the FF in a second” direction, Jeff and I talk about what Doom does in Fantastic Four #58 instead — is he attacking the characters on an emotional and thematic level, or is he just being a trickster because he’s ultimately nowhere near as impressive as he thinks he is? Are all the Doctor Doom stories all the same story, or am I just biased because my introduction to the character was the original Secret Wars? (I also make a prediction about what’ll happen at the end of the current Secret Wars series, because there’s nothing like saying dumb shit that will seem even dumber when it doesn’t happen months from now.)

2:05:00-2:18:19: Even though the Fantastic Four are still busy dealing with Doctor Doom, FF #59 is really about the climax of the Inhumans subplot from the last few issues, and everyone that’s been looking for a logical progression of events might be left wanting, as spectacular as it undoubtedly is. That said, this is the issue that reveals what Doom does with magic power when he’s not distracted by the Fantastic Four, and in the process reveals the hidden connection between The Thrilling Adventure Hour and the FF. (Spoilers: It’s K of the Cosmos.)
2:18:20-2:36:52: It’s taken quite some time, but Fantastic Four #60 brings everything we could’ve wanted; for Jeff, an end to this storyline, and for me, the climactic battle between the FF and Cosmicly-Powered Doom, complete with size-changing arms: 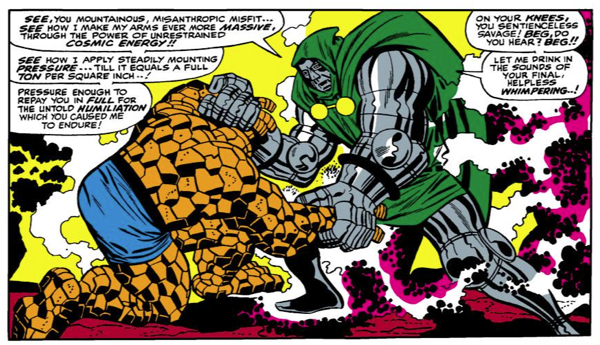 There’s a lot to suggest that Kirby, especially, was hitting some kind of wall in this issue — not only is there some unusual perspective in the artwork, but the pacing of the plot is seriously off, with an unnecessary Inhumans sequence and a wrap-up that happens almost entirely in exposition. Spinning off from that, we end up talking about whether or not Kirby was interested in the very idea of godlike power being a worthwhile pursuit for villains at all, and if not, whether that’s a sign of an innate faith in humanity as a whole. Weighty topics introduced way too late into an already lengthy podcast, you might say (and you’d be right). Also revealed: What the new FF movie gets right. We were surprised. Oh, and because I said I’d post it… 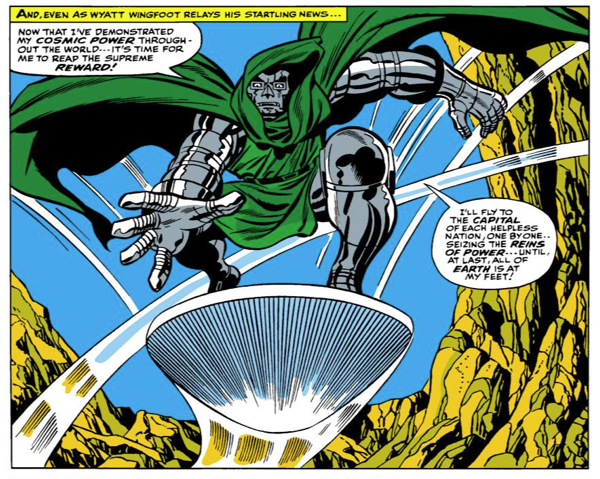 2:36:53-end: What a long, strange trip it’s been, with some long, strange comics covered along the way. Next time, we’ll be covering FF #61-67, when things get right back on track (Honest). Until then, you can find us on Twitter, Tumblr and Patreon, and we’re also on Stitcher and iTunes for those who’d rather listen that way. If you’ve managed to make it this far into the show notes, God Bless You for your patience, and may you find the Power Cosmic within yourself as soon as possible.