Previously on Baxter Building… we read the first 12 issues of Fantastic Four. You can listen here if you don’t believe me.

We’re back, and despite the uneven quality of the issues we’re discussing and our health issues, surprisingly raring to go. Following the example of our first episode, this episode we’re again spending two-and-a-half hours discussing 12 of Stan Lee and Jack Kirby’s Fantastic Four (13, really; we throw in the first annual, as well). For those with very long commutes, you’re welcome. For everyone else, we’re sorry. You know the drill by now: show notes below, and for those who would rather use a podcast provider of choice, you can find the episode on Stitcher and iTunes. Strap in! 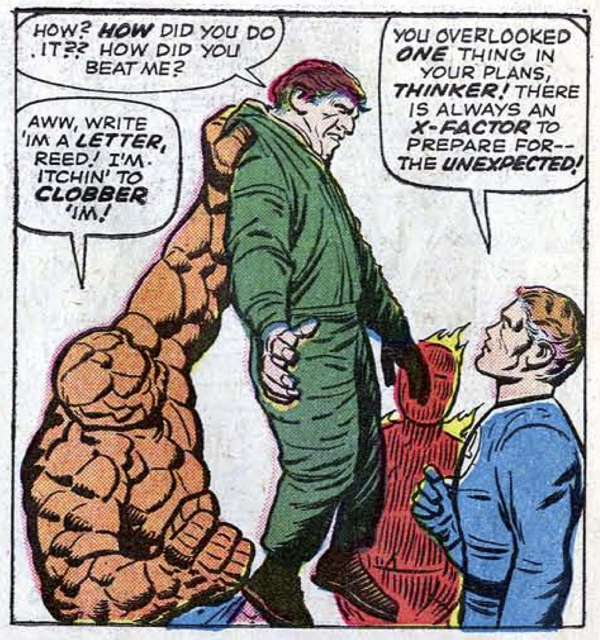 0:00:00-0:02:09: The theme song that never was, some introductions of sorts, and what we’re reading this time around: for those following along at home, we’re going through Fantastic Four #13-24 and Annual #1 in this episode.
0:02:10-08:12:00: Jeff and I talk about how rough this second year of the book is compared with the first. If the first year was filled with the shock of the new, the second is filled with the shock of watching two creators keep returning to the same ideas (and, in many cases, work against each other whether accidentally and otherwise). Also, I name Kirby as the author of the Fantastic Four, which I’m sure is going to upset a lot of people. Sorry! 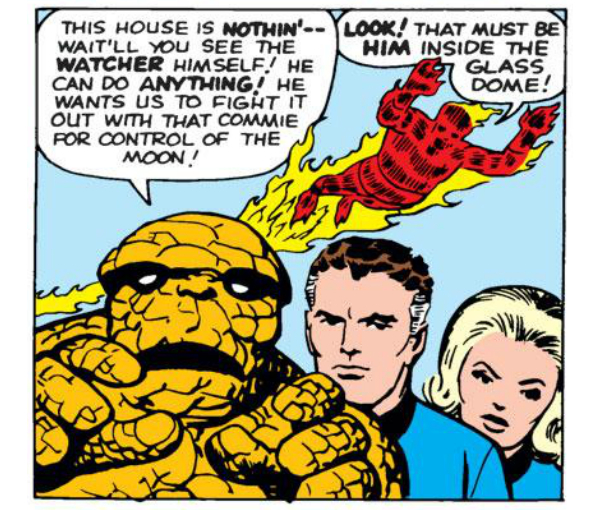 0:08:13:00-0:11:28: The greatness that is Fantastic Four #13, which is notable if nothing else for the Steve Ditko inks over Jack Kirby’s pencils — which Jeff calls, entirely reasonably, “phenomenal.” We also talk about the ways in which the different inkers over the course of the next 12 issues change the look of the book dramatically.
0:11:29-0:18:54: The ways in which FF #13 just blows the earlier issues out of the water in terms of content: this isn’t just the first appearance of the Red Ghost and his Indescribable Super-Apes, but also the Watcher and the Blue Area of the Moon! It’s also the source of inspiration for Uncanny X-Men #137 many years later — and perhaps Jim Shooter’s first Secret Wars, as Jeff points out. (Trigger warning: This isn’t the only Secret Wars reference in the episode.) Also discussed: Are the Fantastic Four just apes, when it comes down to it? Is making the Red Ghost into an analog of the Invisible Girl homophobic, sexist or both? And the gloriousness of Stan and Jack’s accidental meta-narratives! 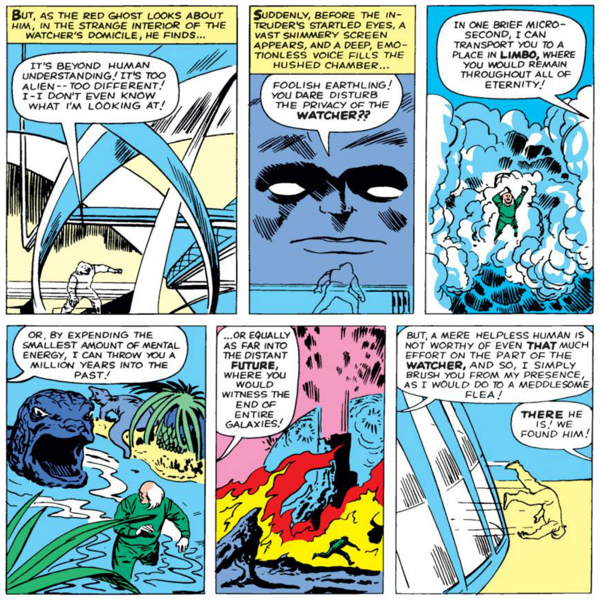 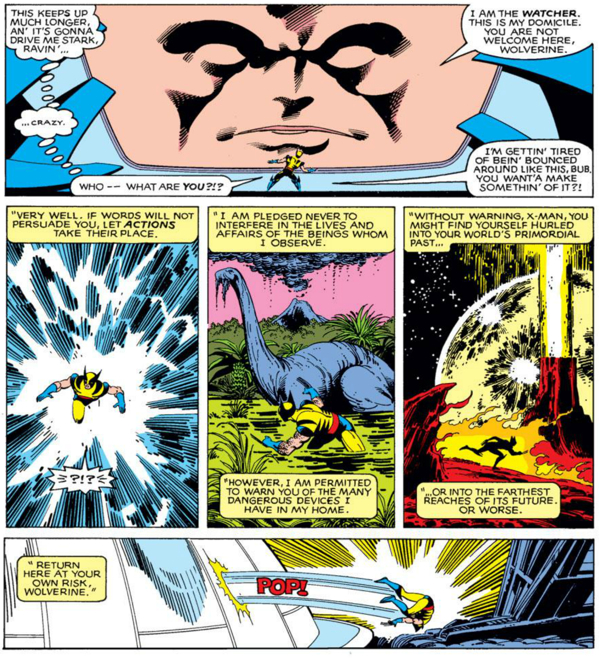 0:18:55-0:32:34: The fourteenth issue of the series is so dull that even the issue’s title sounds tired and apologetic. That said, there’s a fun (if unintentional) shout-out to the previous appearance of the Sub-Mariner as we see the growth of the FF’s celebrity in the Marvel Universe, even if they should arguably be treated with far more respect having just become the first humans to ever make it to the moon and back. Jeff also talks about the shift of the series from a monster comic to one with “a teenager’s point of view” on the world, and a conversation about the first time that you can really see Lee and Kirby visibly fight over what’s actually happening on the page, and the Sub-Mariner doesn’t want to just be friends. 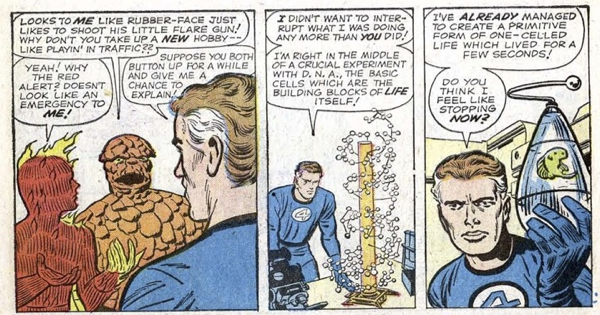 0:32:35-0:55:11: Pop quiz, hotshots: If something isn’t animal, vegetable or mineral, what is it? Stan Lee has the answer! (Or maybe not.) Fantastic Four #15 also gets to revisit the opening of the series’ very first issue and show how they’ve all changed, and demonstrate why Stan Lee’s attempts to reposition Kirby’s very obvious ideas turn Reed into a bit of a dick, and also undermine what Lee’s trying to do in general. Plus, are arsonist organ grinder’s monkeys the new space dinosaurs, and to what extent do the Fantastic Four represent the chaos of the new disrupting the order of the old world, and just how important is human kindness to the success of the Fantastic Four (Spoilers: Very, and we’ll come back to that). All this and the secret identity of Reed Richard’s first child — and it’s not Franklin.
0:55:12-1:04:41: There are so many reasons why Fantastic Four #16 should be exciting, and we list them all, but let’s be honest: the very presence of Ant-Man — “a character on whom Stan Lee’s hyperbole does not work,” as Jeff puts it — dooms it entirely, even though he’s created Google Alerts four decades early. 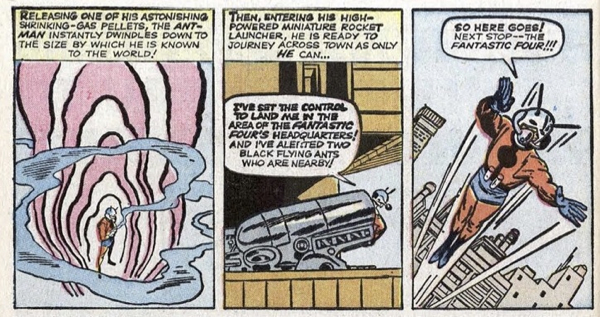 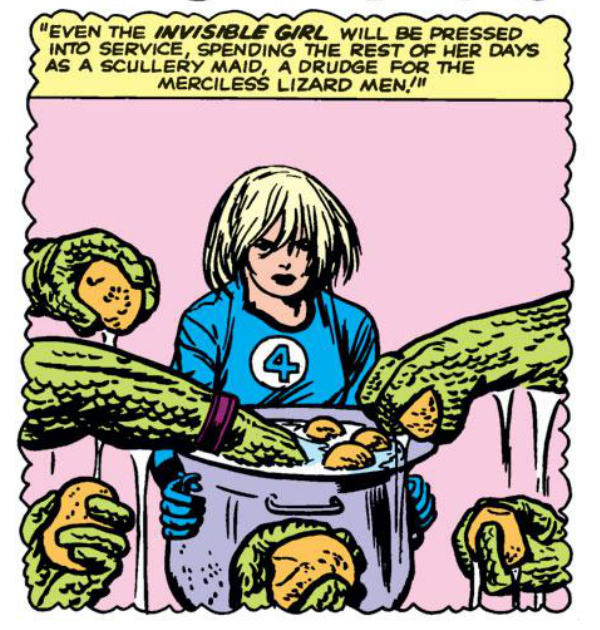 1:06:43-1:16:07: Fantastic Four #17 reveals the canonical connection between the Marvel Universe and the movie Weird Science, and that might be the most interesting thing about it. Has mid-run apathy hit Stan and Jack or Jeff and I? (Let’s just say that maybe some of these early issues weren’t made to be read in a large number at once.) What gets my attention, however, is the extraordinary disguise skills of Doctor Doom, and what that says about the lack of observational skills for the Fantastic Four. It’s the second issue in a row where it fails to add up to the sum of its parts, and we talk about why that happens to be. If you’ve ever wondered who the world’s greatest martial artist is, then the answer is here! 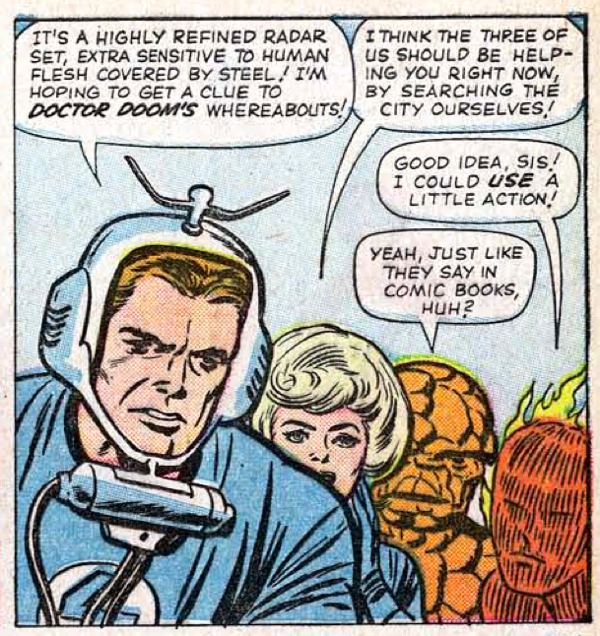 1:16:08-1:26:42: One of the strangest things about Fantastic Four #18 is the oddness of seeing a Skrull — even the Super Skrull, who’s making his first appearance in this story — lifting something up while standing on the thing that he’s lifting. How…? Why…? It’s never explained, so let’s put it down to weird alien science. It’s another relatively underwhelming issue filled with goofy and fun stuff, and we identify the format rut that Lee and Kirby have fallen into so far in this run. Has our modern perspective ruined our enjoyment of these comics? Spinning off that idea, Jeff has a FF/Beatles story that’s not only enjoyable in its own right, but illustrative of a cliche that keeps popping up in these stories to date, and we go on to talk about whether or not Kirby was “ready” to tell long form stories just yet, or whether his monster comics experience is informing his pacing (both in terms of plot and visuals) too much even at this point. 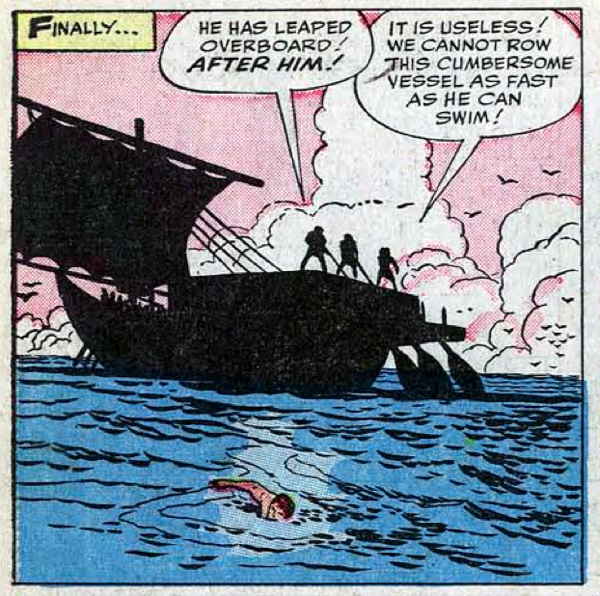 1:26:43-1:36:04: What makes Fantastic Four #19 so great? For me, it’s the lack of research into spelling and the nonsensical plot resolution. For Jeff, it’s the presence of a letter from Steve Gerber (that predicts his future relationship with Marvel) and the impact that he believes this issue had on a young Chris Claremont. What’s that? A BDSM-themed issue of FF? Well… maybe not entirely, but there’s a birth of a trope here, when it comes to Marvel Comics. Also, Stan Lee’s lack of nautical knowledge is revealed in an unexpected manner, and whether or not this is the turning point for Sue Storm being given a little bit more agency. 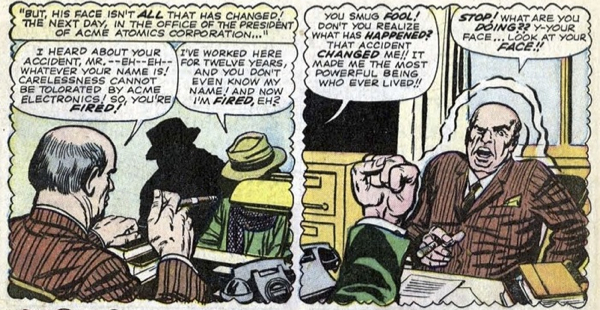 1:36:05- : I really, really enjoyed Fantastic Four #20 a lot, in large part because the origin of the Molecule Man feels like something that Will Eisner had come up with for The Spirit. Meanwhile, Jeff finds a lot to say about the issue as a metaphor for the plight of the comic book artist and wonders whether that’s actually there or not. (There’s another Secret Wars reference in here.) Out of nowhere, Lee and Kirby are working together better than they have been for some issues, and the result is something rather special, with thematic connections to what’s come before… and that’s before we get to the letters page!
1:46:45-1:58:34: The first Fantastic Four Annual turns out to be the best Sub-Mariner story yet, thanks to some great narrative tricks and Kirby getting the space to stretch out, and suddenly discovering a strong sense of pacing for the first time in the FF. We also get the origin of the Atlantean race, another wonderful disguise and proof that the Fantastic Four are bad at vacations. Oh, and New York is pretty much overrun by an invading force off-panel, too. If Namor never really worked for you as a character before, this is the comic that’ll turn you around on him. No, honestly.

1:58:35-2:07:32: What is the most horrific thing about Fantastic Four #21? Adolf Hitler as the villain? The sight of the team torn apart by hate? No, it’s George Bell’s splash page inks, because what the hell: 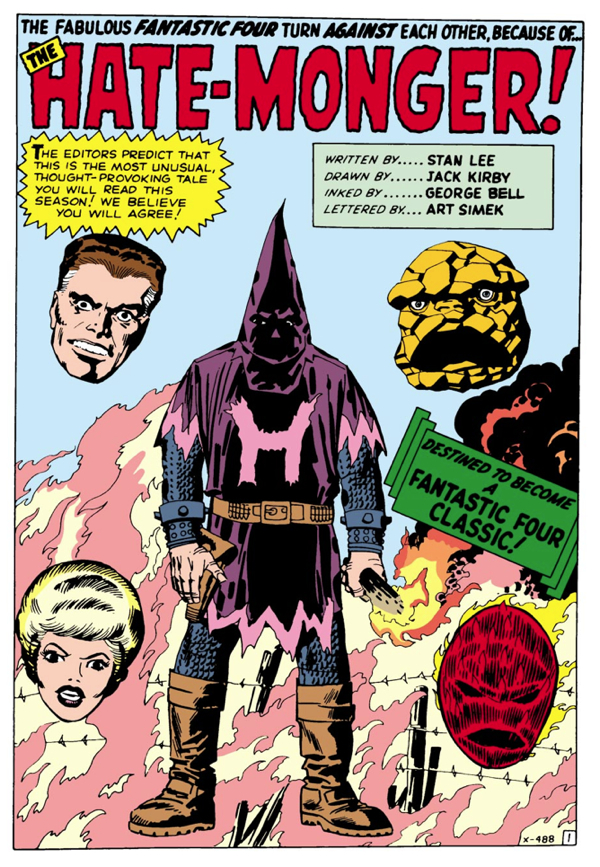 Bell’s inks get a bit of discussion, because I am very much not a fan, but before too long, we’re discussing why this issue just doesn’t work as well as it should: how do you do Hitler vs. the FF wrong? By forgetting that your characters normally don’t like each other, apparently. Does Stan Lee get pacifism wrong? (The answer is yes.)
2:07:33-2:14:10: The Mole Man returns in Fantastic Four #22, and if that seems just a little underwhelming… it’s probably because you read the issue as well. On the plus side, Sue Storm gets more to do — Reed tells her to, obviously, because female agency isn’t a thing just yet! — and there’re more letters page names that you might remember.

2:14:11-2:21:50: We’re closing in on the end of the episode, so we rush right into Fantastic Four #23, which is the all-too-early return of Doctor Doom in such a way that just cheapens everything about the character. But there’s also the chance to see the Fantastic Four act like children, more of Stan Lee’s Alpha Male worship and the depth of which these issues influenced Jim Shooter more than anyone could have guessed.

2:21:51-2:29:30: Stan Lee’s hard sell for Fantastic Four #24 gives the game away about how unsuccessful this issue is, although Jeff and I have so much love for it that it surprises even us. As much as we don’t like it, it turns out that “The Infant Terrible” might be the biggest Kirby theme writ large, which means that we end up talking ourselves into loving it — despite that fact that, yet again, there’s a whiff of Secret Wars II about proceedings. I swear, this episode wasn’t sponsored by Jim Shooter. (He only pays in old Solar, Man of The Atom back issues, anyway.) 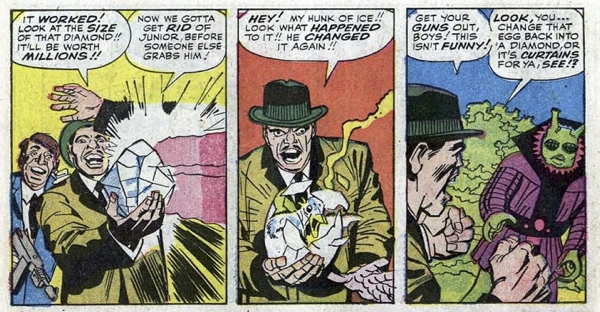 2:29:31-end: As Mike Nesmith once so poignantly put it, “looks like we made it to the end.” If, admittedly, an end that we had to rush to because of real-world concerns. As ever, thank you all for listening — we’re here for you on this Internet at Twitter, Tumblr and Patreon, where there are 95 brave souls making this very podcast happen.

Next week, it’s a “regular” Wait, What?, but everyone reading along should keep going with Fantastic Four in the meantime — the next Baxter Building, covering #25-36 and Annual #2, will be along before you know it. Excelsior!