Please don’t miss this week’s new episode of the podcast, just below. It is much better than this weird post.

I’ve been pretty hard on this Superman: American Alien project Max Landis is writing for DC. At best, I’ve found it decent-but-not-Superman; at worst I’ve been genuinely surprised that DC wants to publish it. But one thing that’s been consistent: the best moments, for me, have come when Landis writes a scene for Clark that seems true to the kid (or teenager, or young adult) he’d be now, in 2016, rather than who he would’ve been in 1945 or 1965 or 1985. The E.T. conversation in the first issue; the X-ray vision scene an issue later … these things have genuinely worked for me.

The other thing that’s been great is the art; they’ve given Landis a terrific assortment of rotating artists for the book, and they’ve managed to make sure even his more offputting ideas look lovely.

Now, in the most recent issue, Superman: American Alien #5, either Landis or artist Francis Manapul or the gestalt of the two has given me my favorite Superman image since Frank Quitely’s work on All-Star Superman. Look: 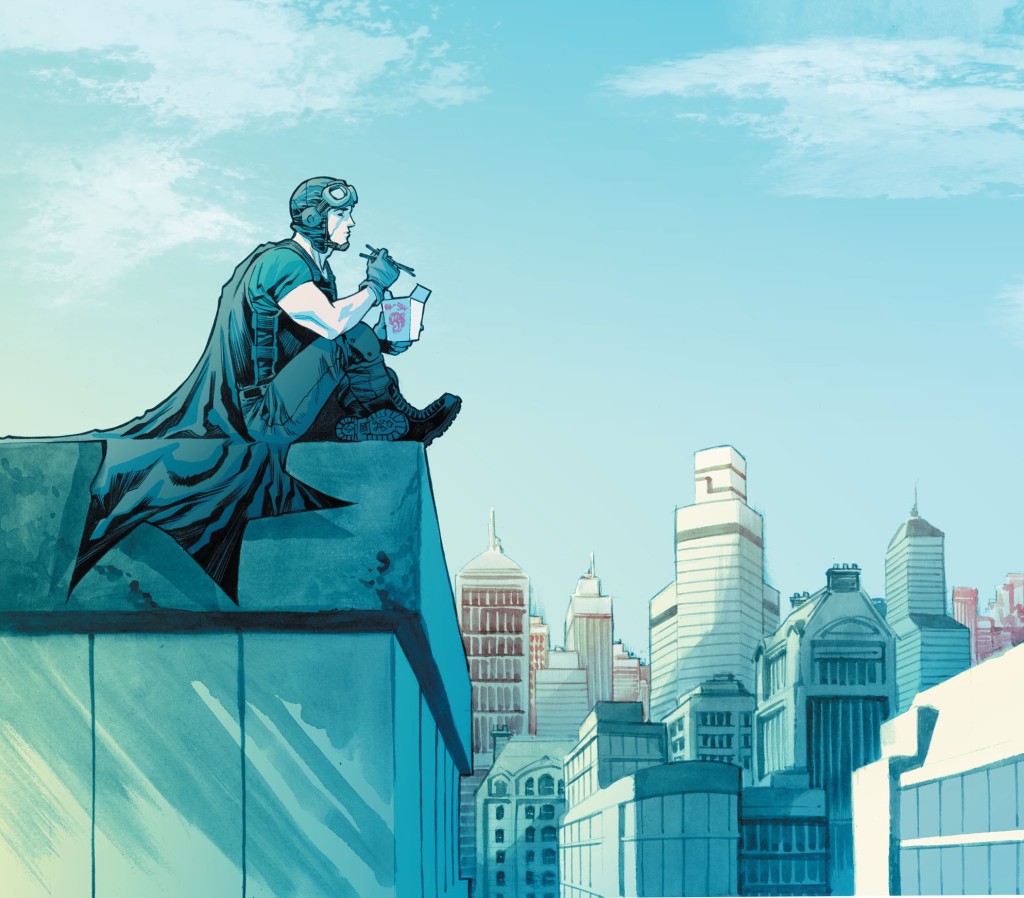 No, seriously. Let me explain.

The helmet and bulletproof vest are what Landis posits a young, just-getting-his-start Superman would wear. I don’t love it, but it fits the conceit of the story, so let’s leave that aside.

What we’re left with is a Superman in repose, hanging out on a rooftop and eating some takeout Chinese food. And with that image, it’s the first time that I really see Clark Kent as a young adult newly moved to the big city. Previous iterations of this trope have included “country bumpkin shocked by the big buildings” and “confident young Superman establishing his secret identity in the urban crowds.” Both of those seemed to work at the time, but both made Clark seem like a 40-something in a CW star’s body.

This is something else altogether.

Part of it is my own baggage, as usual. No doubt about that. When I finally managed to stagger out of college, I moved to Baltimore. It gave me that living-in-the-city vibe at a tenth of the rent of D.C. or New York, and I loved it. My then-neighbor-now-wife and I were friends with our building’s maintenance guy, a zany ex-con who would give us tours into the basements and crawlspaces of our hundred-plus year-old building to show us where they had (allegedly) found bodies during the renovations. And he showed us how to get onto the roof.

Baltimore is more Gotham than Metropolis (although if I’m being honest it was always more Opal City to me, a quirky patchwork of deco and modern and run-down and built-up where if you loved it, you really loved it, and if you didn’t you thought the people who did were insane), and our building was short, just seven stories, but I still loved being up there. It felt like being in a city, which is to say that it felt kind of like being in a movie.

So, yeah, part of the reason I love this image is my own baggage. But the other part is that takeout container.

Superman’s favorite food has always been, for most geeks my age, beef bourguignon. More recent takes on the character, notably Mark Waid’s in his Birthright series, have posited Clark as a vegetarian, but that’s never stuck with me. For me, it’s always been beef bourguignon. And, like the old iterations of the kid-in-the-city story, it made sense for Superman as he was written for a long time.

Beef bourguignon, for those who have somehow missed it for the last 100+ years, is a stew of beef and bacon and mushrooms and onions and carrots and wine. Its roots and flavors are from Burgundy, France; you can find a detailed history here and a terrific updated recipe for it here. It is, in other words, meat-and-potatoes peasant fare at its core, and therefore exactly the sort of thing that farmboy Clark would like, but it’s also been fancied up a bit, making it something that he’d enjoy as an adult.

Julia Child is credited with popularizing beef bourguignon in America, both in the 1961 edition of Mastering the Art of French Cooking and as the first dish she cooked on her iconic TV show. So it was also a homecooked dish, exactly the sort of thing a modern woman like Lois might make for a fancy date in 1976, which, in turn, would also help cement it as Superman’s favorite dish. (I’m going to skip the whole “beef bourguignon as a stand-in for sex” thing, thanks.)

So, sure, that all makes a ton of sense. But in 2016 it is the sort of dish that only a 60 year old man or a 20-something with an elaborately waxed mustache and a tattoo of a meat cleaver would claim to adore. It’s dated and stodgy, neither American comfort food nor anything particularly contemporary, and if I were writing an elaborate piece on the intersection of foodways and popular culture I would say that beef bourguignon in some small way points out everything that’s become frustrating about Superman in one tiny detail.

But takeout … that makes sense. That somehow feels right. That, combined with the roof, combined with the relaxed pose … this, maybe for the first time, is a young Superman that I believe is a 20-something living in a modern city. That takeout container subtly points at thematic ideas of immigration and assimilation, while also simply being exactly the kind of convenience food that you’d grab from a corner joint while killing time between bank robberies or whatever.

And he’s using chopsticks! Not in a dramatic “Hey, Superman knows how to have dinner with Japanese royalty” way, but just in a casual, yeah, of course he can use chopsticks, it’s 2016 kind of way. I love that, for some reason. I love everything about this image.

(I even love the way it weirdly echoes Rey sitting at the foot of her AT-AT and eating bread in her goofy helmet in The Force Awakens, because it somehow manages to retroactively help explain why that scene resonated as well. No idea how the creation timeline matches up to SW:TFA‘s release, and I’d assume it’s just coincidence, but it’s one I really enjoyed.)

In fact, if I’m being really fair, I can’t even be too critical of the helmet/vest combo, because I don’t think this image would work in the traditional costume. MAYBE Grant Morrison’s T-shirt and jeans Superman from the early New 52 Action Comics books, but not the full bodysuit.

All of which is very, very long way of saying that I really liked this panel for a whole bunch of reasons. I was sort of lukewarm on the rest of the issue, but that panel? Aces. 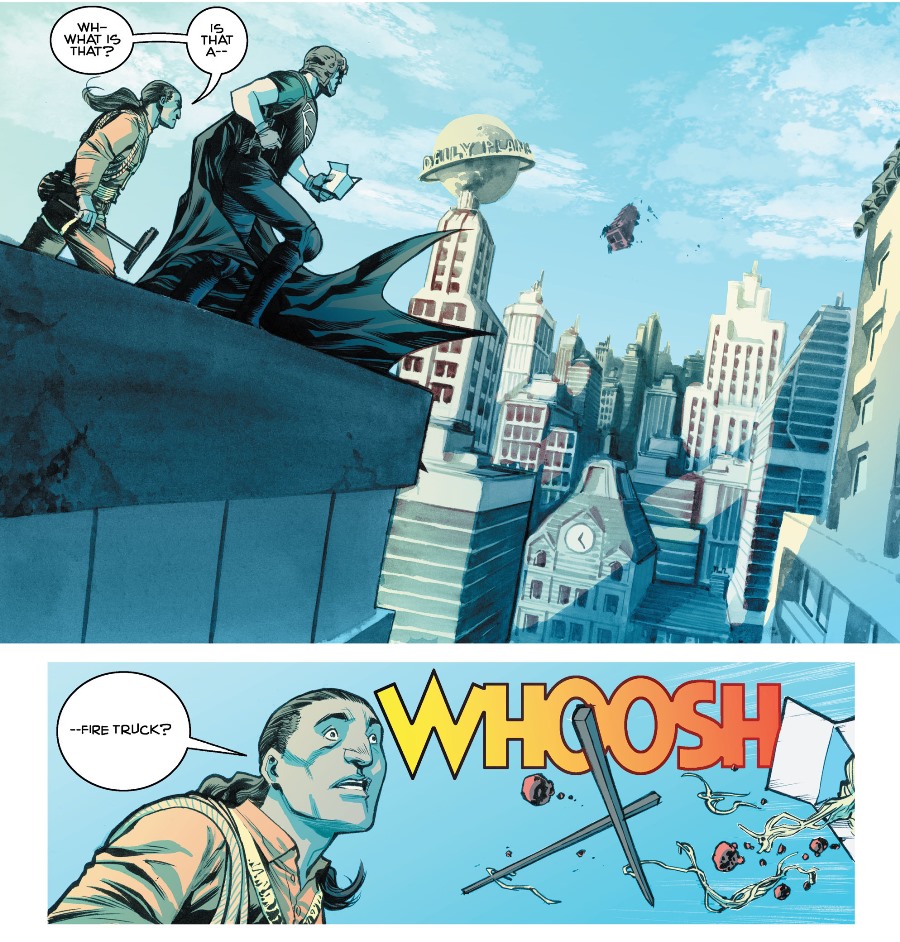