You may or may not remember, back in July last year, DC announcing 8 new miniseries intended to “freshen up and contemporarize” a number of fan-favorite characters with that tried-and-true method: bringing back old-school writers, because white men in their 60s can make things contemporary like no-one else. The series, it was announced, would launch in early 2016.

So here we are in early 2016, and all but one of the series have, indeed, launched… kind of. Only two of the series that have appeared have come out in their originally-announced format — Swamp Thing and Poison Ivy: Circle of Life & Death — with five of the others ending up running in anthology series that have ended up being uneven, to say the least.

(The missing book is a Raven solo written by Marv Wolfman, unless that’s come out and I’ve overlooked it.) 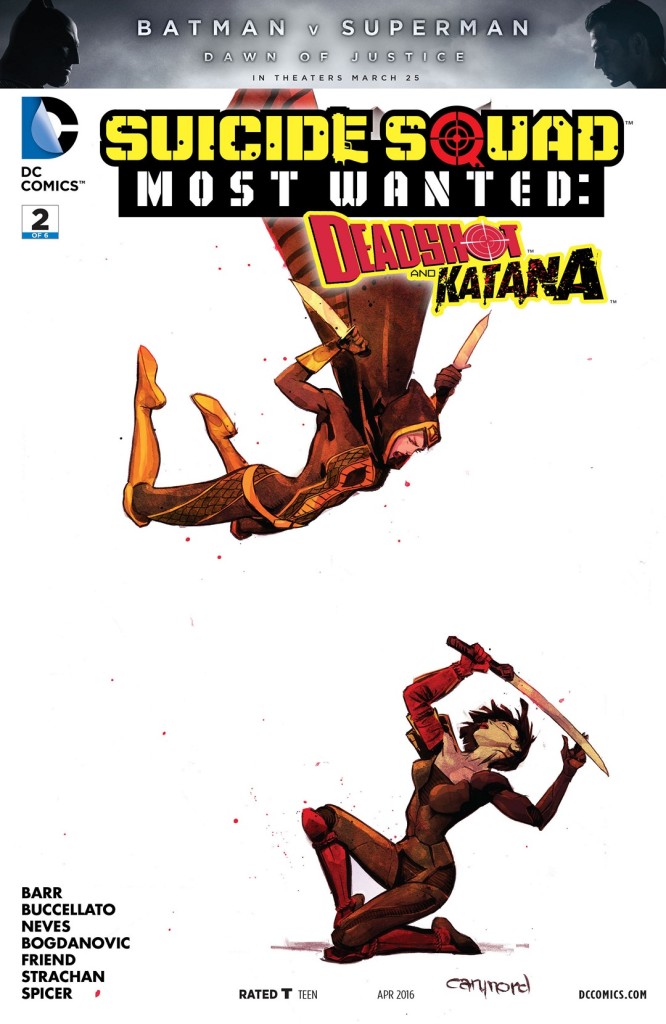 The first of the anthologies to launch was Suicide Squad Most Wanted: Deadshot and Katana, which paired the previously announced Katana: Cult of the Kobra by Mike W. Barr and Diogenes Neves with an all-new Deadshot story by The Flash‘s Brian Buccellato and Viktor Bogdanovic, AKA the most impressive Greg Capullo clone you could imagine. (It’s shameless, how much his style is “influenced” by Capullo, but also impressive.) Here, at least, is an two-fer that works thematically — both strips are quasi-gritty, in the way that superhero comics so often try to be, although Barr’s Katana is arguably more old-school superheroic, which appeals — and feels like there’s a coherent reason to bring the two into the same series, given the Suicide Squad connection. The fact that they take place in different time periods and that has to be explained via editorial note isn’t ideal, but at the same time, meh; it’s kind of par for the course. It’s a book that essentially works. (I like it, but don’t love it; it’s not to everyone’s tastes, for sure.)

The second anthology, however… hoo boy. Legends of Tomorrow, named after the CW series but with no link to it other than Firestorm appearing in both, is a supremely frustrating title. In theory, I love the idea of it: Four all-new full-length stories in an $8 comic? Great. Four all-new full-length stories featuring characters and concepts that couldn’t otherwise hold their own in the current marketplace? Even better; done right, it could be a model for something akin to an American 2000AD with a revolving cast of creators, characters and entry point for new talent to be brought into the fold! Unfortunately, it’s not done right. 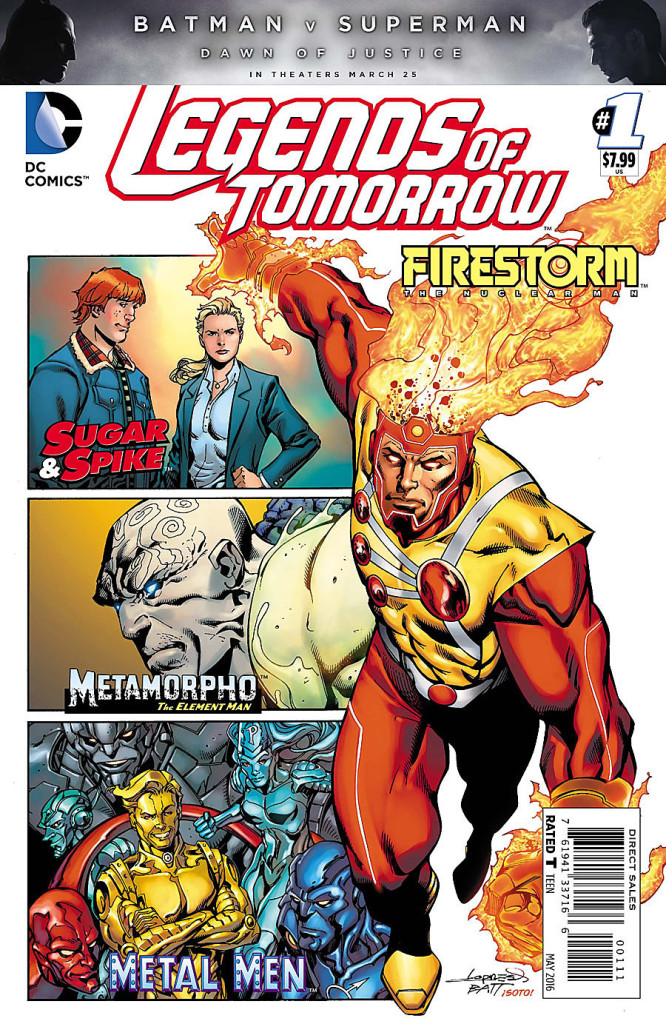 On the other hand, it’s not done wrong, either; none of the four strips — Firestorm by Gerry Conway and Eduardo Pansica, Metamorpho by Aaron Lopresti, Sugar & Spike by Keith Giffen and Bilquis Evely and Metal Men by Len Wein and Yildiray Cinar — are actively bad, and Sugar & Spike is surprisingly good, but the series lacks an identity, and with three-quarters of the series merely okay, that’s a real problem.

About those 3/4: Firestorm needed a stronger introduction to the cast; Metamorpho needed more urgency and, I get why Sapphire was upgraded to a genius scientist but I find myself tiring of the “she’s better than the guys but no-one ever looks beyond her beauty!” trope, as terrible as that sounds — I feel like it’s used to deflect accusations of sexism, but often stands in place of a personality and Metal Men is just… fine… in a surprisingly Geoff Johns-ian manner. Really, Sugar & Spike stands out by not only having an attitude and introducing its characters — very much in Giffen’s snarky curmudgeons-who-believe-in-a-better-world vein, at least on first reading — well, but by being blessed with Evely’s art, which gets the job done easily and attractively with no fuss; she’s someone I hope gets more notice in future, and maybe a gig on a higher-profile book soon, too. 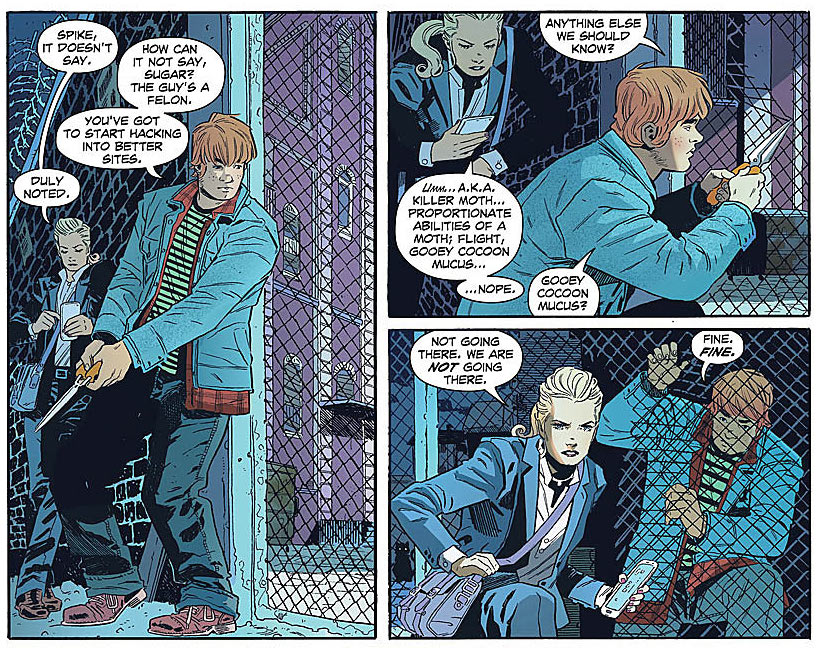 But Legends doesn’t feel like a coherent title in any way whatsoever. Stories lack identifiers (Would it have killed someone to put a “METAMORPHO” logo on the start of that strip, for example?), and there’s no throughline in terms of the content on offer: Firestorm is the only superhero strip, with Metal Men being sci-fi, Sugar & Spike essentially a buddy-comedy detective story, and Metamorpho… maybe sci-adventure…? It’s unclear.

I miss Tharg, as well. Or, really, the idea that there’s a reason for the book to exist beyond let’s burn off some inventory material — even a inside-front-cover introduction, offering some kind of “DC’s history is filled with legends, we wanted to bring some back to share with you, dear reader” boilerplate, would have helped there. It’s emblematic of the book as a whole: a small tweak that really could’ve made a big difference to the finished product.

Despite all this, I want Legends to succeed, and I want Suicide Squad Most Wanted to succeed; I like anthologies, and want to see them more often adopted more widely across the U.S. industry. In order for that to happen, though, they’ll need to be more heavily curated, created with an identity and purpose and filled with material that audiences find themselves unable to refuse — in other words, better than Legends of Tomorrow in almost every way. Better luck next time, I guess…?