When I was about five years old, I got this Captain American balloon that I thought was just about the coolest thing in the world. It was nothing hugely special, just a shiny Mylar balloon with a generic picture of Cap on the side. (I think it was a John Byrne drawing, but I could be wrong. It was the standard slight-crouch shield-in-front pose that they used for Cap merchandise in those days.)

But I loved it because I had, at that time, NEVER seen a Captain America balloon before. Everything was Spider-Man or Hulk (who had their own Saturday morning cartoons) or MAYBE Fantastic Four (because their cartoon with H.E.R.B.I.E. wasn’t too far in the past), or, of course, Superman or Batman in their José Luis García-López designed licensed-product incarnations.

So this Mylar balloon lived in my house for what seemed like AGES (in kid-time, which probably means it was about a week), hovering ever farther from the ceiling, until finally it was just a crumpled silver bag of air on the ground and someone threw it away. I was inconsolable, because I was sure I would never see a Captain America balloon again, and I resigned myself to a life of Hulk merchandise. (I haaaaaaaaaaaated Hulk as a kid. I kinda still hate that incarnation of the Hulk, if I’m being honest.)

Sitting on the couch last night watching live-action versions of the Flash and Supergirl fight the Silver Banshee and Livewire on CBS primetime, that Cap balloon came to mind. And the idea of trying to describe for my kids a world where Captain America was a niche character whose balloon was tough to find … I mean,  I might as well have tried to explain what it was like to have to tan my own leathers for clothes. (NOTE: tanning leathers is a thing that people did, right? Maybe?)

It’s kinda counter to the vibe of the whole “Flash visits Supergirl” crossover episode to start it with a slightly depressing story about a balloon, but oh well! More cheerful discussion of the episode (including SPOILERS, not that there’s anything all that spoilable) continues below!

JUST LOOK AT THESE TWO

So I haven’t seen BATMAN V SUPERMAN: DAWN OF JUSTICE yet, partially because I wasn’t all that hot on MAN OF STEEL but mainly because I have those two aforementioned children and have to plan my movie trips very carefully. (i.e., Either it’s something I can bring the kids to or it’s something where I’m willing to pony up for three-plus hours of a sitter. This one was neither.)

But you know who DID want to see BVS:DOJ? My son, that’s who. He is, as mentioned, five, and therefore completely baffled as to why Superman and Batman are fighting, but BY GOD DOES HE WANT TO SEE IT, and by god was he devastated when I told him there was no way in hell that was happening.

So this episode of Supergirl was pretty much his consolation prize, and, thank goodness, he was cautiously okay with trying it out.

(My daughter, for what it’s worth, is more like a feral cat: if you tell her she’ll like something, she won’t go near it, and she’s correspondingly refused to watch any episodes of Supergirl despite her love for the comic. So for her, it was just about turning this on and hoping she’d slump on the couch to watch. Success!)

I’ve been an intermittent watcher of Supergirl and a pretty regular watcher of Flash, so I had some idea what to expect from this episode (shiny happy superheroics, a little soap-y drama with Supergirl, some awkward-looking makeup on the bad guys). But I was not prepared for my son’s consolation prize to turn into an overt, deliberate response to BVS:DOJ.

Because that’s what this was. Writers Greg Berlanti (story) and Andrew Kreisberg & Michael Grassi (teleplay) steer so unbelievably far into the skid of being the anti-Zack-Snyder-verse that it’s almost ludicrous.

Flash (Grant Gustin) shows up on Supergirl’s (Melissa Benoist) Earth and immediately saves her–the classic “hero misunderstanding” isn’t a fight, it’s Barry Allen accidentally catching someone who could’ve flown away. Then he buys her ice cream. Then they go to get donuts together. I am not exaggerating about any of this. They even named the episode “World’s Finest,” just to drive the point home.

But it was only ludicrous in the best possible way. These are two screen superheroes who seem to ENJOY their powers, who seem to ENJOY being impossibly good-looking and charismatic, and who seem seem to ENJOY each other’s company, and it’s a delight to watch. Gustin’s Flash plays well as a fish out of water–he gets a little more swagger and a little less angst–and Benoist, who, as Kara Danvers, is basically the human incarnation of a hug from a friend wearing the world’s softest fuzzy sweater, was even bubblier and more infectiously joyful to have a super-powered pal to bounce off of.

Yes, the villains were goofily made-up and kind of terrible, but that wasn’t the point. If anything, it just increased the feel that this was one of those comics you get to see heroes team up that you’ve never seen before, but they do so in service of a fill-in story. (Spider-Man teams up with the Wasp to fight … Equinox, the Thermo-Dynamic Man! That kind of thing.) It felt, in all the best ways, like a one-off issue of Mark Waid’s Flash run, maybe one of the between-epics issues that was co-written with Brian Augustyn.

So for me, it 44 minutes of perfectly pleasant, diverting bubble-gum TV. But for my kids, man, this was a Captain America balloon. My son hasn’t stopped asking questions about it ranging from the minute (he’s especially baffled by why Kara’s boss [Callista Flockheart] keeps getting her name wrong) to the most important: what happens next? He was initially excited to see the Flash (“Oh, good! I was hoping there would be a boy superhero!”) but by the end he was deeply curious to know what Supergirl was going to do about all the people in her city being brainwashed, and he’s made me swear that we’ll watch again next week to find out.

Which, it seems to me, is kind of what the goal of these shows and movies should maybe be? I get that it’s exciting to be influenced by Dark Knight Returns and 9-11 and the visual aesthetic of a Korn album cover, but doing that is faithful to modern superhero comics in another, more unfortunate way: it’s playing to the existing base to the exclusion of potential new fans. It’s appropriate that DC Rebirth and BVS:DOJ shared a weekend, is what I’m saying, and this episode provided a nice counter-argument to both of them. Not everything needs to be sunshine and daisies–Deadpool being Deadpool made perfect sense to me–but maybe Superman and his family should generally be closer to it.

All of that is a really long way of saying that this show was, quite literally, fun for the whole family. (Even my daughter allowed herself to enjoy it, although she was very critical of Silver Banshee’s makeup, and of the kissing at the end, which she still finds icky.)

It’s still no Mylar Captain America balloon, of course, but really, what could be? 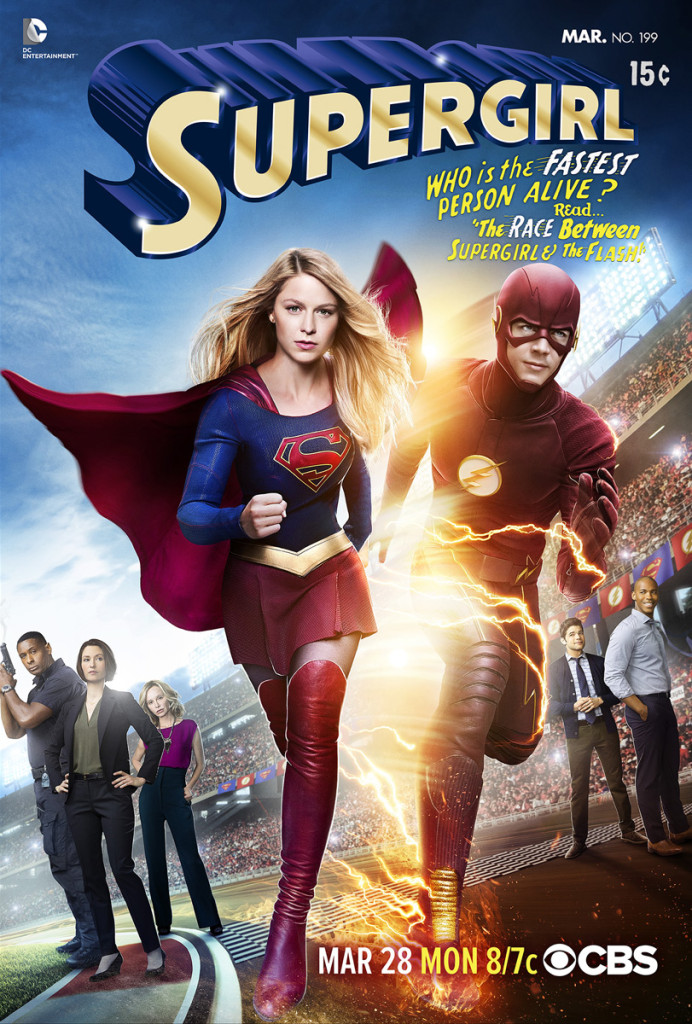