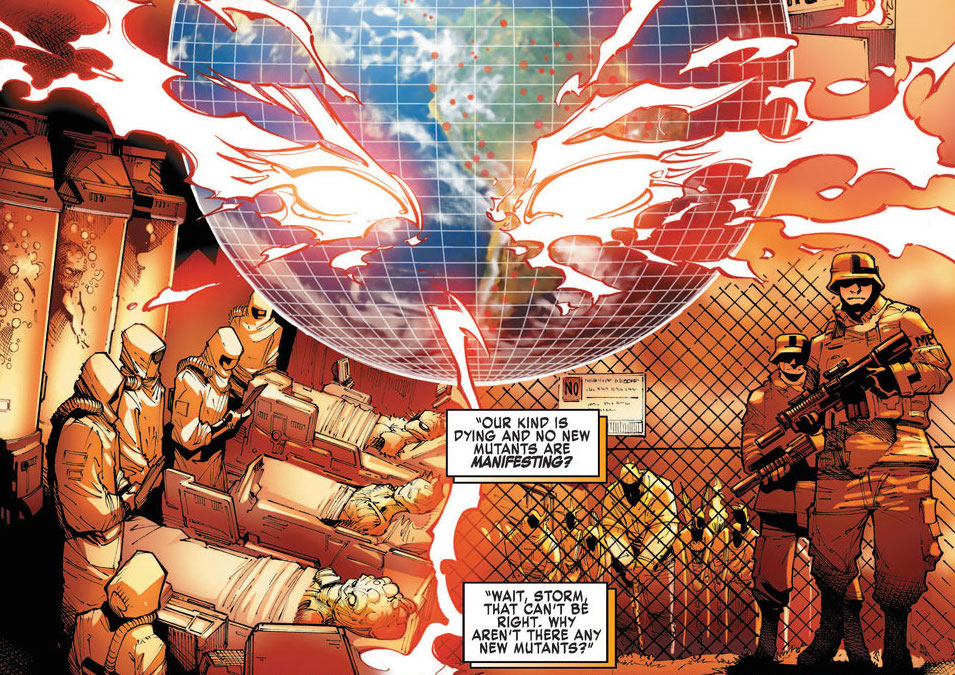 “Still Hated. Still Feared. Still Standing.” That’s the header for the PR that Marvel sent out today, advertising Extraordinary X-Men, the appallingly named new X-Men title launching as part of the All-New All-Different Marvel relaunch next month. The PR contained three pages of the first issue of the series, by Jeff Lemire and Humberto Ramos, which convinced me that this series was most definitely not for me.

It’s not that the pages are so egregiously bad that I find myself appalled by what’s on offer; Lemire’s script is entirely functional if impressively expositionary — “Look, I told you all after everything that happened with Cyclops,” teen Jean Grey says at one point, with the emphasis lampshading that we don’t know what Cyclops has done, we should read all the X-Men books to keep finding out — and Ramos’ art is exactly what you’d expect if you’ve ever seen his work anywhere before: making up in stylization for what it lacks in terms of page layout, creating a sense of physical space and character acting. (Quite why Iceman now lacks a face is an open question, mind you; is that an intentional redesign, or just the way Ramos draws him?) 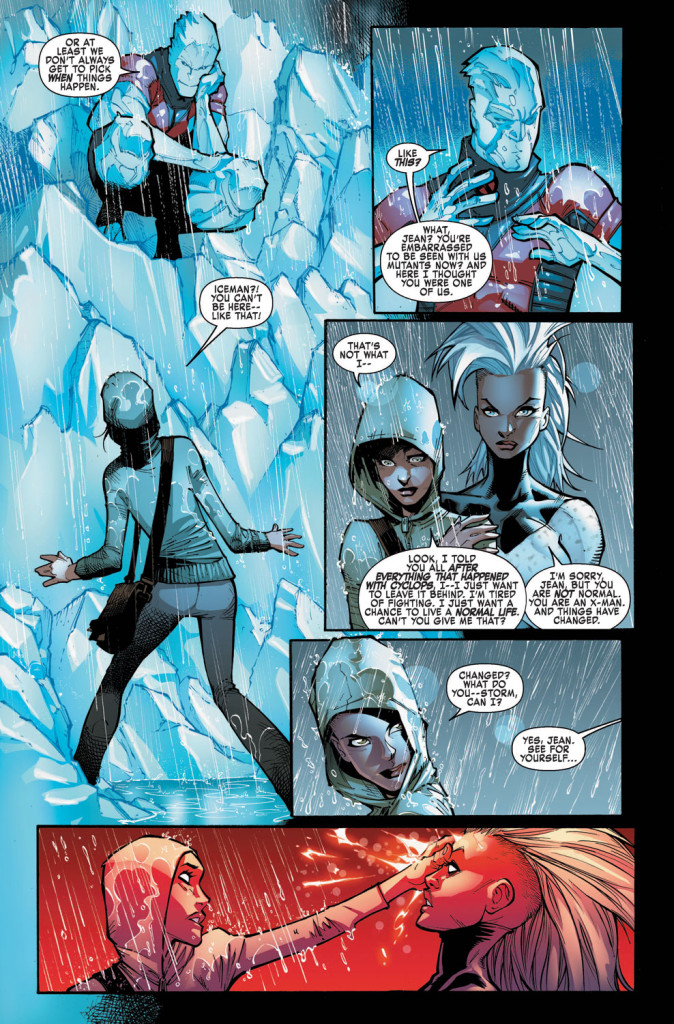 No, the problem for me is in the revelation the preview has about the new X-Men status quo. “The Terrigen Mists aren’t just killing is… they’ve sterilized us as well,” Storm says, helping every Marvel Comics Conspiracy Theorist out with regards to their “Marvel is pushing the Inhumans down our throat and they hate us” thinking. Yes, that’s right; the new status quo for Marvel’s mutantkind is that… they’re dying again. Just like they were when the Scarlet Witch said “No More Mutants,” and there were only 198 of them left in the world. Because nihilistic dystopian superheroes are exactly what we want to read, right?

I’m being sarcastic, but let’s face it — that is what many people want from this particular franchise. X-Men has become, through accident or design, one of the most consistently adolescently depressing superhero concepts around: they’re hated and feared! They’re on the verge of extinction for one plot-related reason or another! They’re distrusted by all the other superheroes! And now the origin mechanism of another Marvel franchise proves to be literally deadly to them, because… oh, God knows. Because things were grim enough? But throughout it all, X-Men remains, if not a top-seller for Marvel, then at least a strong-seller, proving that there really is an audience for this kind of never-ending hopelessness.

The solicits for the other December X-Men books promise more of the same. All-New X-Men says Terrible acts committed by mutant revolutionary Cyclops have placed mutantkind in extinction’s crosshairs,” while Uncanny X-Men yells, “In a world that’s never hated or feared mutants more, there is only one constant: BIGGER THREATS REQUIRE MORE THREATENING X-MEN.”

These books aren’t for me, and not just because I’m neither a goth nor a teenager who thinks that the world is actively working against him; they’re X-Men comics that have more in common with the 1990s material that was almost like a parody of Claremont’s most melodramatic tendencies, when things just continually got worse and worse for our heroes. “My” X-Men is a series that certainly contained more than its fair share of gloom and doom — I was reading during the Mutant Massacre, after all! And through Fall of the Mutants, as well — but there was always an optimism and sense of both humor and the thrill of grand adventure to balance things out. As Elliott Smith almost put it, while situations got fucked up, they also got turned around sooner or later (The post-mutant massacre era was a continual downward trend until Fall of the Mutants turned X-Factor into celebrated heroes and let the X-Men become reborn in the outback, for example, and there would be individual issues offering lighter asides to the increasingly weighty, depressing larger arcs, with Arcade or some other random villain popping up as comic relief). Now, it feels as if the X-Men line is consistently a bummer.

And so, in a way, the Extraordinary preview does its job — it gives me enough of an idea of what the series is like to know what to expect… and, more importantly, what not to expect. The goofiness and light of Jason Aaron’s Wolverine and the X-Men was a momentary blip in the otherwise bleak worldview of the franchise’s last decade-or-so, apparently. (Wow, Grant Morrison left New X-Men in 2003! I am old.) Like the other All-New, All-Different Marvel books, this seems more like a doubling-down on existing ideas and directions than anything actually new or different, and, really? It’s not something I want to read. I might not hate or fear the direction of Extraordinary X-Men and its sister books, but I do find them pretty boring.

4 comments on “Like Elton John, The X-Men Are Both Still Standing And Past Their Prime: Graeme Thinks About Extraordinary X-Men”