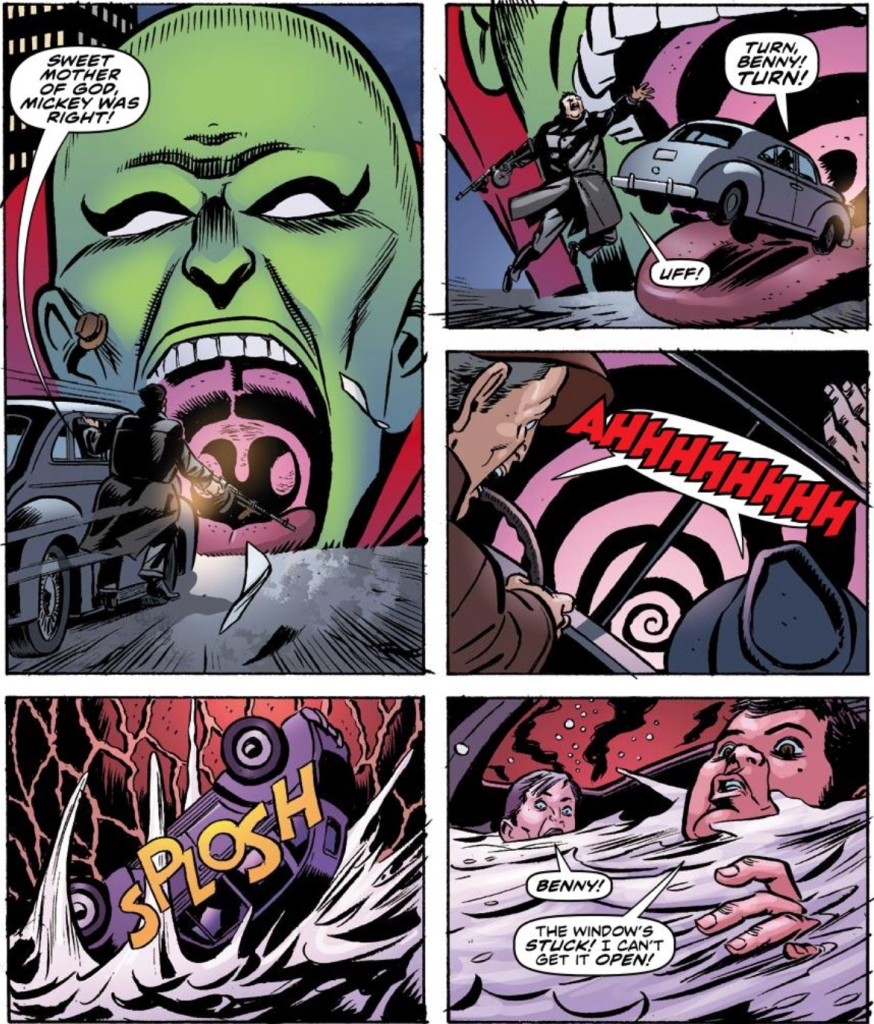 It’s kind of a drag Matt can beat me at my own game but, let’s face it, not entirely surprising, either.  Fortunately there’s not a huge amount of overlap between what the stuff he so incisively reviewed and the stuff I’m going to fumble about.  But there will be a bit so…more fool me, I guess?

SECRET WARS #7:  Matt’s review is so on point it seems silly to follow it…but I do want to point out that while my esteemed colleague suggests this might be the apotheosis of Hickman’s work, there are bits I found surprisingly atypical.  I mean, probably only a licensed Hickmaniac like David Uzumeri could make the call between Hickman’s typical stately pace and outright stalling, but this seemed like a supersized Hickman issue lopped in half.  Everything about it suggests an “oh hey everything is hitting the fan all at once” and yet the ostensible cliffhanger of issue #6—Ben Grimm ceasing to be a big old cliff (too on the nose?) and rising up—is not addressed in any way whatsoever.

And once I got over the cleverness of The Panther’s using his title as King of the Dead to rally the forces of Deadworld behind him, I found myself wondering: “If he can do that, why does he need an Infinity Gauntlet anyway?  And why would he take the time out to do it now when Strange told him in issue #6 to “use [the gauntlet] wisely, and if you must, use it quickly”?  Actually, I wouldn’t be surprised if this little bit wasn’t in Hickman’s original plot….but I would be surprised if the scene had originally called for as much zombie dithering and zombie backtalk and zombie slapstick as we actually get.

So, yeah. I really suspect that before the original publishing schedule went off a cliff this was supposed to be an oversized issue of everything escalating against Doom, leading us in to the big winner-take-all slapdown of the finale.  And unfortunately, if I’m right, that means next issue will be even more of these pieces falling into place and then we finally get to what would’ve been the more or less the final issue as planned.  I suppose it’s a better solution than filling up two issues with a reprint of Avengers #16, but I feel it weakens whatever confidence the reader might have in both Hickman and Marvel. I’m the last person you’d see advocating for the return of reprint fill-ins, but there is a blatancy to them that now feels almost like candor on the part of the publisher, the printed equivalent of badge of shame (that unfortunately completists cannot help but buy anyway).

To sum up: this was terrible.  But isn’t it kind of interesting to think of all the many reasons why it ended up being terrible?

RADIOACTIVE SPIDER-GWEN #2:  I really have to give it up (again!) to Monstress: Liu’s choices in the unfolding of her fantasy world showed me how this world-building stuff can be done well…and gave me some insights into why this book still frustrates me, even as I continue to root for it.  Because on the one hand, this was clearly the best issue of Spider-Gwen yet, and the other it makes me the creative team is obviously still finding their feet and some of their creative decisions are continuing to trip them up a bit.

RSG #2 has more of pretty much everything I want to see (although it looks like Spider-Ham has been unceremoniously dropped, which is kind of a bummer even as it’s probably being the right call):  more fights (between Gwen, this world’s incarnation of Cap, and a bunch of rampaging Lizards), more emotion (a scene between Ned Stacy and Ben Parker over Spider-Woman’s innocence), and a gesture at an overarching plot (Peter Parker becoming the Lizard is no longer an isolated incident, but possibly part of some larger scheme involving the mysterious S.I.L.K.) and one that would give Gwen a chance to be a little more pro-active in her own book.

But, yeah, post-Monstress, it was really easy to kibitz and be all, “wouldn’t it have been great if Gwen had started investigating Peter’s death on her own instead of having people show up to deliver two-fisted exposition?  And then there’d be more of a context to show off the book’s What If-ness as Gwen’s investigation unfolds?”  (On a related note, I like both the Rule 63 Cap and Falcon we see in this issue, but sorta feel like it would’ve been a better swerve to have the eyepatched Agent Carter also be genderswapped so the Fury mislead would’ve lasted more than half a panel.)

But…it is what it is, I guess?  It’s not like LaTour and Rodriguez are resting on their laurels–and considering LaTour is also doing double-duty as an artist on Southern Bastards, that’s also no small achievement–but, at the same time, their way of messing with the Marvel superhero story template is neither original enough to be surprising or faithful enough to be satisfying. 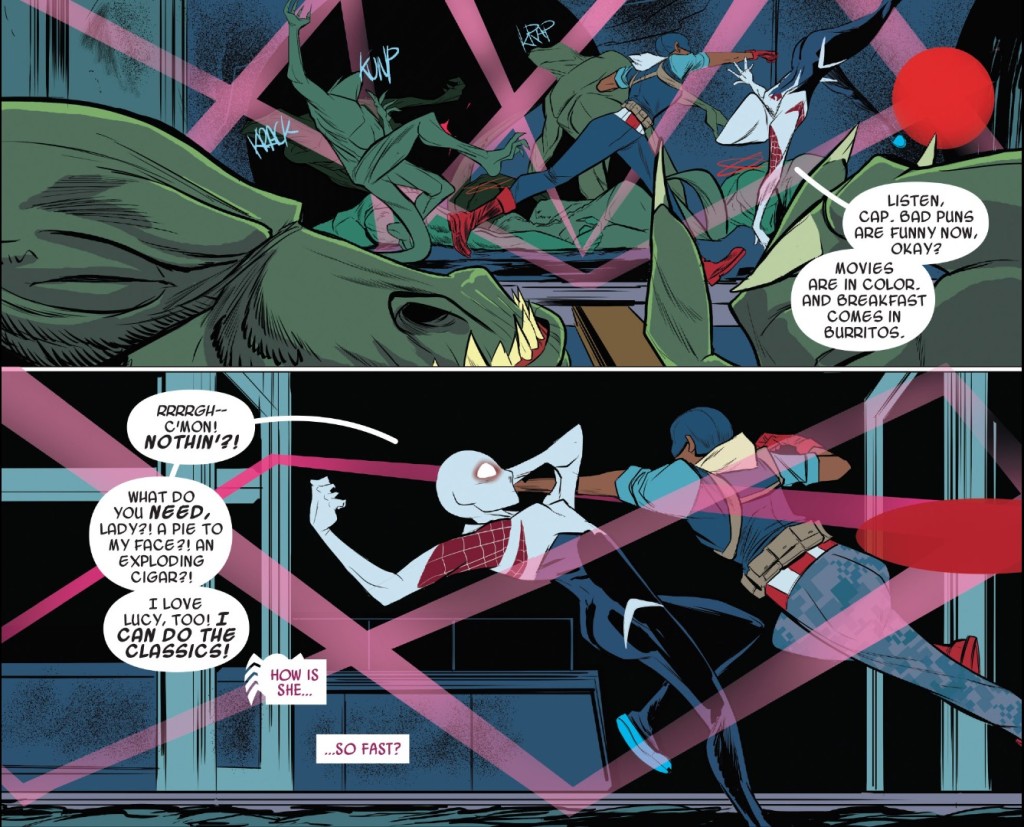 And I still feel the largest problem is I don’t know who Gwen is, really.  LaTour and Rodriguez have so many subplots and secondary characters cooking here, there’s no real scenes of Gwen as Gwen.  This is the miracle of backseat driving, but part of what makes Spider-Man work so well is how Spidey is an extension of what Peter wants and needs and feels responsible for.  (No creator ever needs to undertake a “who is Peter Parker?” storyline the way they seem to with Bruce Wayne and Clark Kent.)  Apart from Gwen’s guilt over Peter’s death–and all the best moves in this issue are about hooking her reactions and the larger plot to that engine–there just isn’t anything to her.  (When I read that bit above, I honestly couldn’t tell if I was supposed to think it’s genuinely important for Gwen that people think she’s funny.)

Until there is, I don’t know if I can ever put down an issue of this book and really feel satisfied. 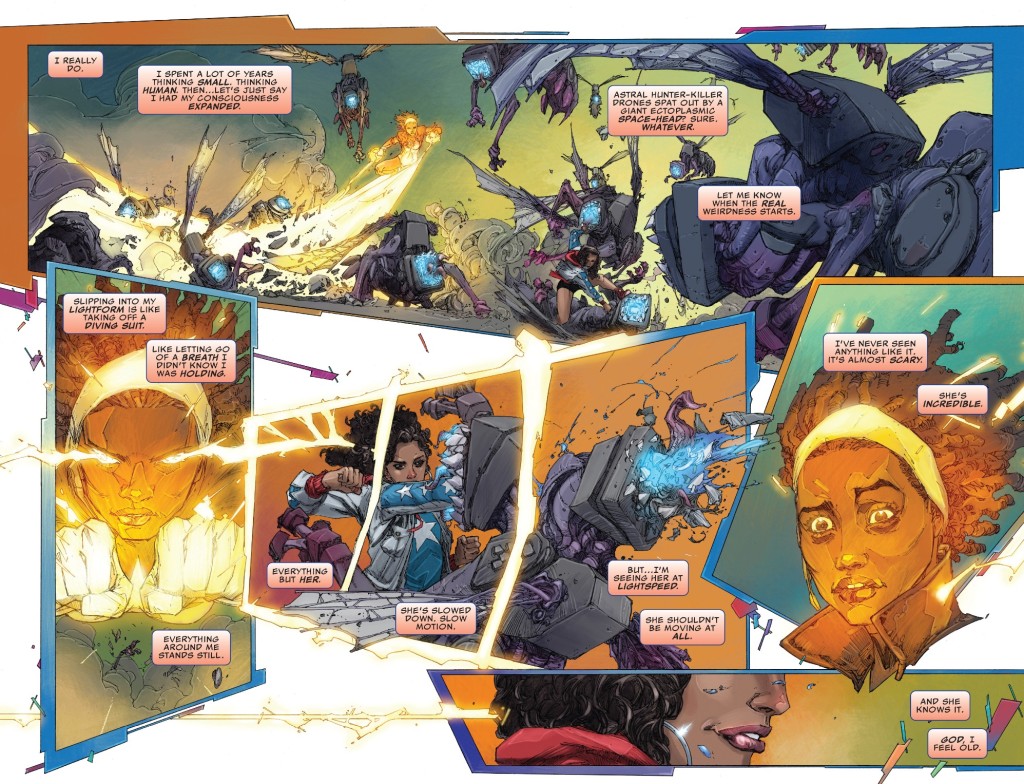 THE ULTIMATES #1:  Hey, another chance for me to both ride Matt’s coattails and use it as a springboard for my own reactions!  Recently—and I mean like really, really recently—I decided to use the ANAD Marvel as a way to support and follow Al Ewing’s work  right out of the gate instead of hanging about like a no-goodnick and waiting for issues to fall off the back of the Marvel Unlimited truck.

Unfortunately, like Matt, I was underwhelmed by the issue.  I kinda wanted to blame it on Kenneth Rocafort’s art, which was an offbeat choice for a cosmic level comic book–it’s more Denys Cowan than Jim Starlin–but I do wonder if maybe the problem is a bit structural as well.

Back in the old days, superhero books opened up with people slugging one another and we liked it.  In Ultimates #1, we have an explanation of how Marvel’s in-game currency is now officially canon.  Because it’s Al Ewing, it’s an incredibly clever explanation that may become even more meaningful when Secret Wars concludes or when next summer’s Invasion From Iso-9 event begins.  That aside, I can’t imagine how it’s genuinely dramatic unless you care about the underpinnings of the Marvel Universe… and not the “Who Is The Celestial Madonna?” underpinnings, but more of the “Where Does the Celestial Madonna Get Her Hair Done, and Do You Know If They Take Cards Because I’m a Little Short on Cash Today?” underpinnings.

I will say it’s fun to watch a book start with a story hook so far over the top, so if it continues to ramp up from here, it may be genuinely satisfyingly insane by issue four so…fingers crossed! 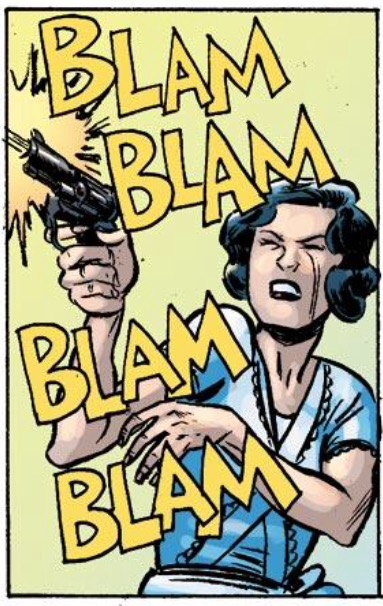 MYSTIC COMICS 7Oth ANNIVERSARY SPECIAL #1:  I have no idea what kind of trademark protecting/market flooding/kitten killing scheme Marvel was into back in 2009 when it published Mystic Comics 70th Anniversary Special #1 (a title so long it’s almost a third of a tweet).  I mean, it’s a 40 page “salute” to the original Vision, an obscure Golden Age Marvel character, with the last 16 pages of the book being two reprinted stories from 1940 and 1941 (with covers) by Jack Kirby and presumably Joe Simon, though he’s not credited anywhere), and featuring a cover so hastily done (it’s credited to “Juan Doe” [which is the genuine working name for a real artist!  Sorry, Juan and thank you, Zeb, for the correction]).  The cover features The Vision completely miscolored so that he looks like either a  giant Mr. Sinister or a semi-miscolored Deadman, depending on your age and Big Two leanings.

It is not the kind of cover that inspires optimism, let’s put it that way. And yet inside is a 22 page story written and drawn by David Lapham that’s both insane and great. In it, we get the Vision–an extradimensional being who can appear wherever there’s smoke (“the long sought component to open the gateway to the supernatural”)–take on some gangsters, turn into a giant head and swallow their fleeing car, meet up with the scientist who brought him to this dimension and the scientist’s daughter who has a crush on the hero, the appearance of a Kalimachh “Destroyer of Light,” an evil reanimated gardener, innocent civilians made insane, one monster rampaging through  the city, one gangland shootout…and more!

I admit I feel like a little bit of a dick talking about this comic since: (1) it will probably only be of interest to you if you have Marvel Unlimited (where it sits safely tucked away); and (2) I still haven’t read or reviewed any of Lapham’s current Stray Bullets work at Image because (3) I bought that enormous old Omnibus and have let it sit on my bookshelf unopened for well over a year now, but (4) read this instead because it was on my iPad and easy and (5) wanted to review it, despite (6) it probably being less important to Lapham creatively and almost certainly fiscally.  (Full disclosure: okay, I really feel like a dick.)

So but here’s the deal.  Even though Lapham’s journeyman days with Marvel, Avatar, and DC and its assorted imprints never entirely clicked with me, I always dug how off-kilter they were.  In an industry filled with guys inspired by Jack Kirby, Lapham’s work read more like Joe Simon: garish and barely nuanced and maybe pandering to a crowd I’d never really understand, much less be a part of.  It was almost as if outside of Stray Bullets—which I really had loved in its first incarnation—there was no common context for me to really get what Lapham was going for. 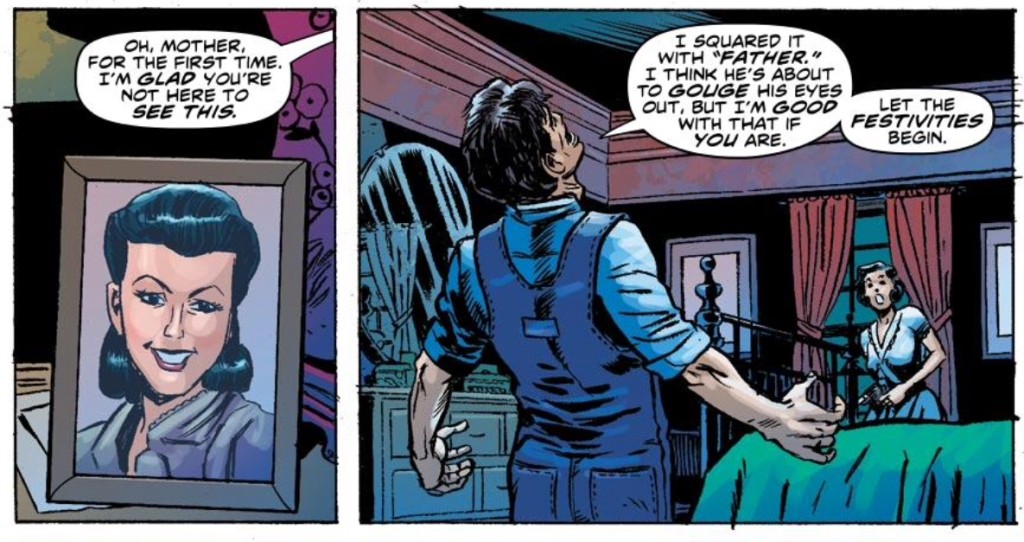 Turns out the Golden Age superhero comic is a context I can understand, and Lapham lets his art—powerful but always on the edge of looking crude—look downright unrefined in places. (Check out those lines and inks bleeding off the sides of the panel.)

It’s perfect for the Golden Age of gaudiness where the power fantasies were unrefined, and the comics had a brutality and taste for apocalyptic visions they’d swiped from the pulps.  Lapham’s story is so on point I half-wonder if, like Alan Moore on his Supreme pastiches, he more or less lifted it outright.  Lapham doesn’t go full Fletcher Hanks, mind you, but if you dug, say, Fleisher and Aparo’s run on The Spectre way back when you should check this out.  On my version of Doomworld, there’s an army of cloned Laphams, and while one or several of them keep on keeping on with Stray Bullets, the others turn out enjoyably offbeat stuff like this.