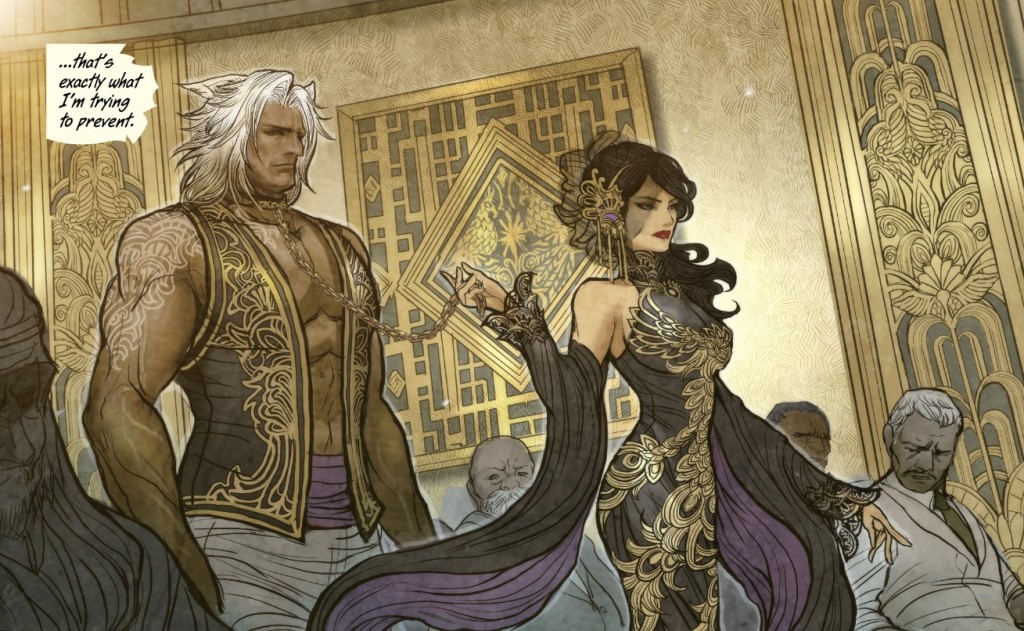 MONSTRESS #1:  As you’ll hear when the podcast goes live on Monday, Graeme and I a bit of talk about Marjorie Liu and Sana Takeda’s Monstress #1, which just came out from Image Comics.  And, as you’ll also hear, Graeme does most of the talking because at the time he had read the issue and I hadn’t.  Based on his description of it, I turned around and bought it right off Comixology while he was still talking.  Woo, the future!

(Amusingly enough, I think Graeme actually did the same with Platinum End, the new series from the Death Note team or Ohba and Obata which I’d read and he hadn’t.  And maybe also of note, each book was more or less the same page count—71 pages—for very different price points: Monstress for $4.99, and Platinum End for $0.99, which probably tells you something about the respective audience sizes:  even at five times the price, Liu and Takeda are taking a much larger risk with their price point than Ohba/Obata/Viz/Shueisha, Inc.

And if this was a nicely symmetrical column, I’d get all McCulloch on your ass and weave a deft series of comparisons between the thematic underpinnings of the two.  But…. nope.  I’m here to talk about Monstress. Join me after the jump for more. 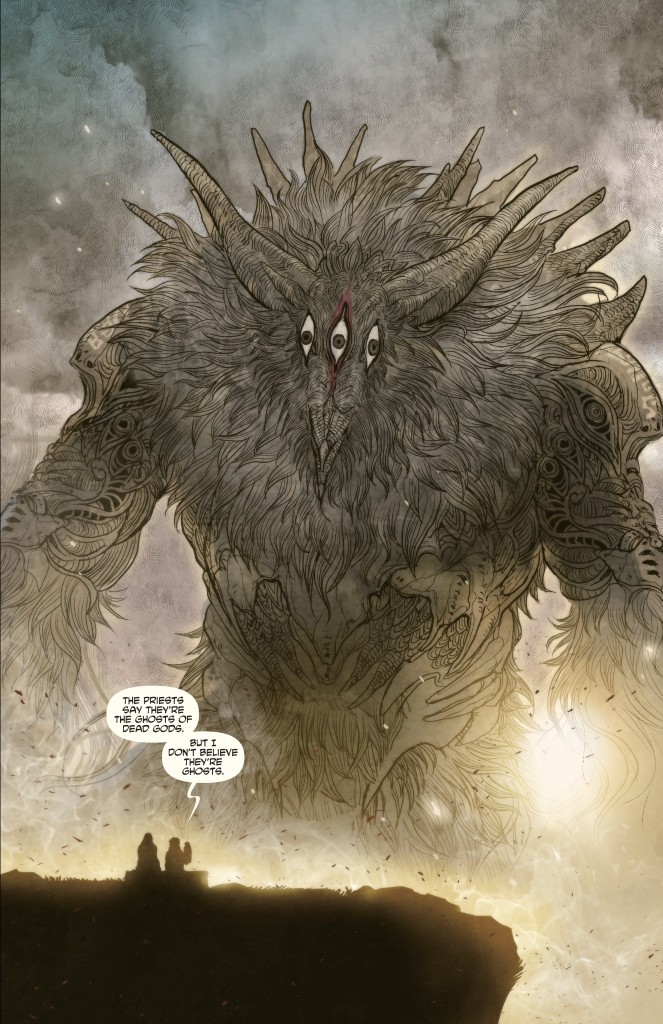 The obvious bit first:  this is a beautiful looking book. To my ignorant eye, Sana Takeda’s art and colors cast a wide net of influence—the strong, striking character design of video games; a delicacy of color and linework (especially in the hair) that makes me think more of manhua than manga; an eye for body language and a predilection for sensuality that reminds me of Stjepan Šejić (which maybe means similar influences by Silvestri and Turner); and I keep wanting to say there’s a Euro influence there but it might just be the darker color palette and reading 70 pages at a go, which gives it the feeling of reading an album of BD.  It’s lovely work and it feels like a lot of the choices were either made to reinforce the themes of the story or the story was crafted with the artist in mind.  (Probably both, right?)  Like a lot of supersized first issues, it’s awesome but the real test is going to be what issue #2 or #3 looks like.  But just taken on its own merits, this is a stunner of a book.  For someone like me who is easily swayed by gorgeous art, it probably would’ve been a satisfying purchase just for that.

But the great news is writer Marjorie Liu brings the goods there, too.  After a long and brutal war, the rural (and monster-associated) Arcanics lost to the urban (and magic or psionic-powered) Cumaea and now the former are at the mercy of the latter, to the point where Arcanics are enslaved, or rounded up and devoured bit by bit by the Cumaea for the magical powers they impart. The issue opens with our protagonist, Maika, an Arcanic letting herself be sold into slavery as part of her desperate plan to exact vengeance on a powerful Cumaean leader.

One of the charms of Monstress is the nuance with which Liu reveals the who and the why and the how of that vengeance, along with all the other pieces of her fantasy world.  It’s a complicated backstory, but it feels like an invigorating dose of revelation instead of an infodump or flavor text because Liu never gives you an answer without inspiring you to ask the question first.  The book starts with a slightly stronger dose of narration from Maika to make intentions clear, but after that Liu lets her progression of scenes do the heavy lifting.  I’m not much into fantasy stuff—in part because the stuff  I tried featured settings either too generic to be interesting, or so turgid in their worldbuilding as to stultify—so Liu’s storytelling really impressed the hell out of me here. 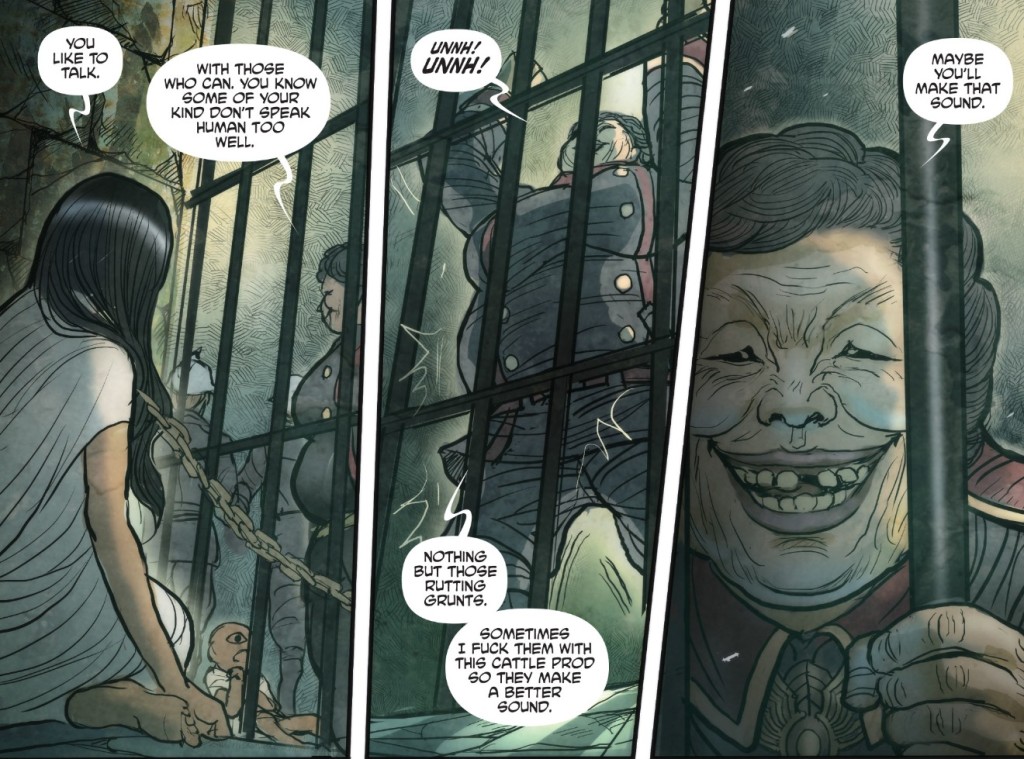 The book’s tone is dour.  At the beginning, we see three Arcanic moppets–a cyclops, a fox girl, and a winged boy–and by the end one is dead, the other is armless, and the third barely escapes being eaten…by our protagonist.  And yet while Takeda’s art invites bathos (there are a lot of wide-eyed little children in this book), the stylization somehow makes it more palatable, a little less unrelentingly grim if only because of the dark humor involved. 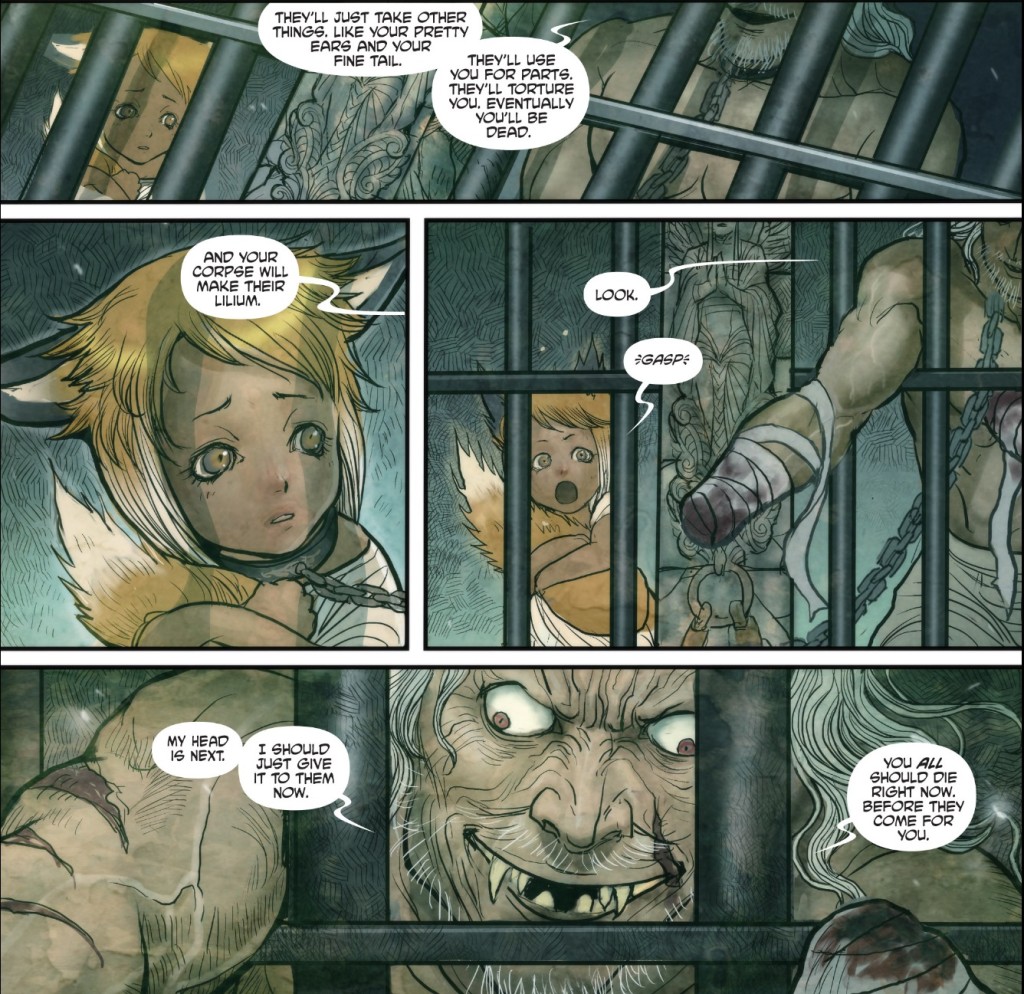 While all those little maimed children make me think a bit of Henry Darger and the Vivian Girls, they also help frontload the strange visual subtext running through Monstress as well. Maika’s charges are children and she herself barely looks pubescent, but many of her opponents in the first issue are full bosomed, showing lots of cleavage.  Additionally, the visual motif of the vanished god who may be bonded to Maika, is a sideways eye, more than a little, y’know, vaginal.  Whether these motifs will stay subtextual or bloom into a more developed thematic point, I really can’t say…but I have a lot more confidence in Liu and Takeda to do something interesting with it than two male creators might. 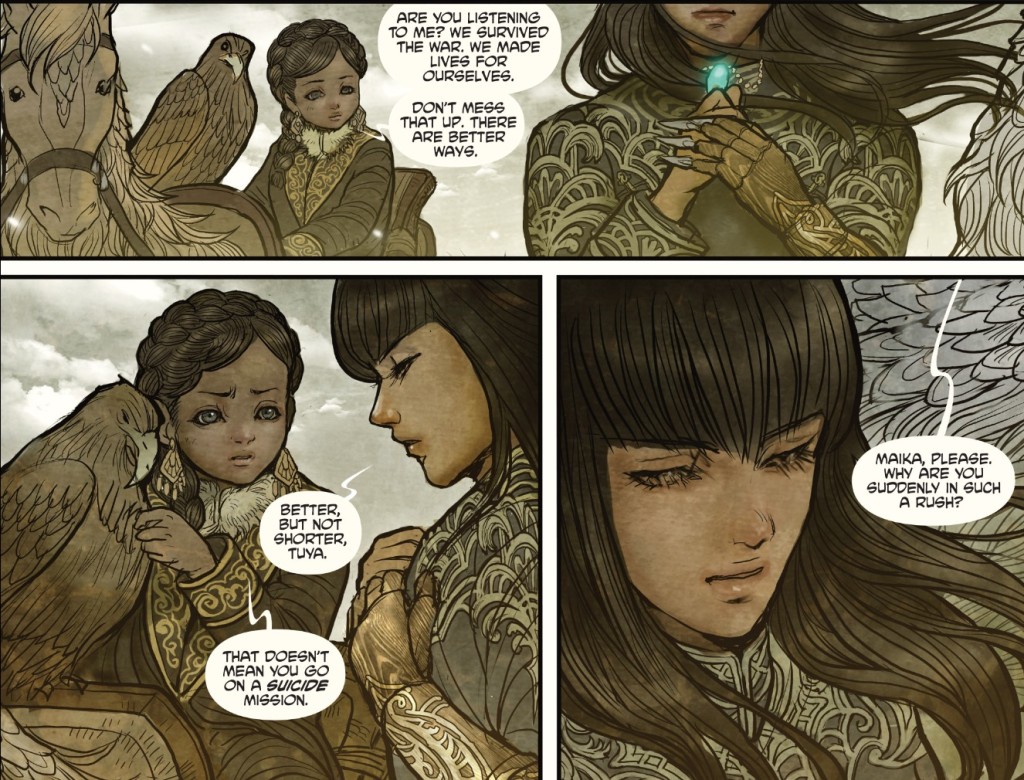 Overall, my only real regret about Monstress is about the text page at the end where Liu talks about her grandparents living through the devastation of war and the painful and horrible struggle to survive afterward.  She writes:  “And the root of my desire, I finally realized, was to tell a story about what it means to be a survivor.  A survivor, not just of a cataclysmic war, but of racial conflict and its antecedent:  hatred.  And to confront the question:  how does one whom history has made a monster, escape her monstrosity?” 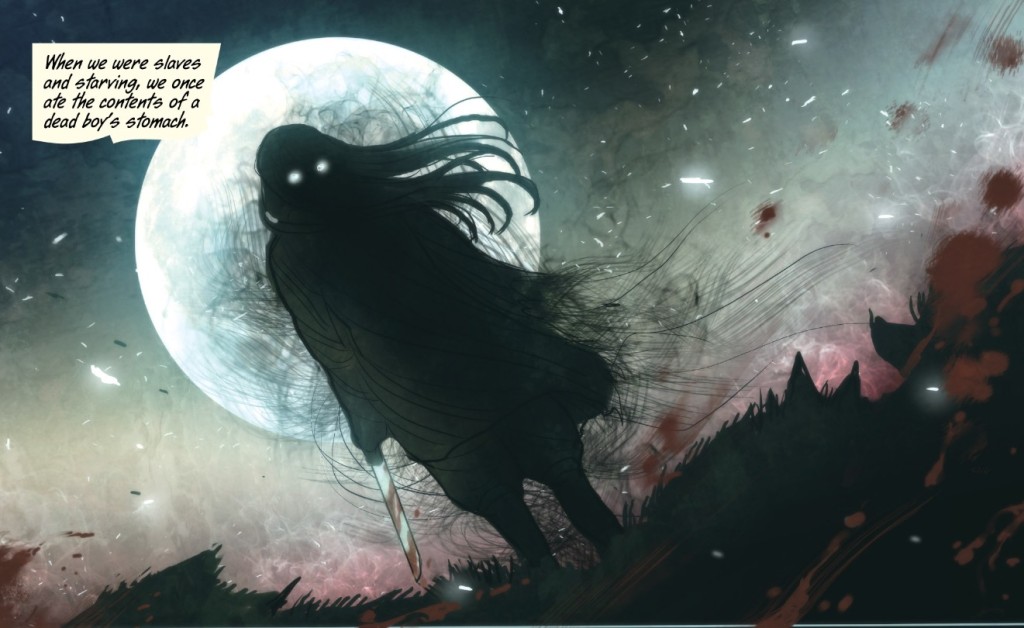 The note is great if you want to compare Liu’s intention to what the book accomplishes.  In fact, it describes and justifies so much of the book’s choices and tone I found myself nodding as I read.  But…I almost feel like it’s too on the nose, gives away too much of the game, especially after an issue that propelled me from page to page on the strength of  keeping me guessing.

Will getting even the briefest glimpse of the map spoil the trip? I can’t say.  For now, though, Monstress got me onboard in a big way.  In a year filled with series launches, this might be one of the best.