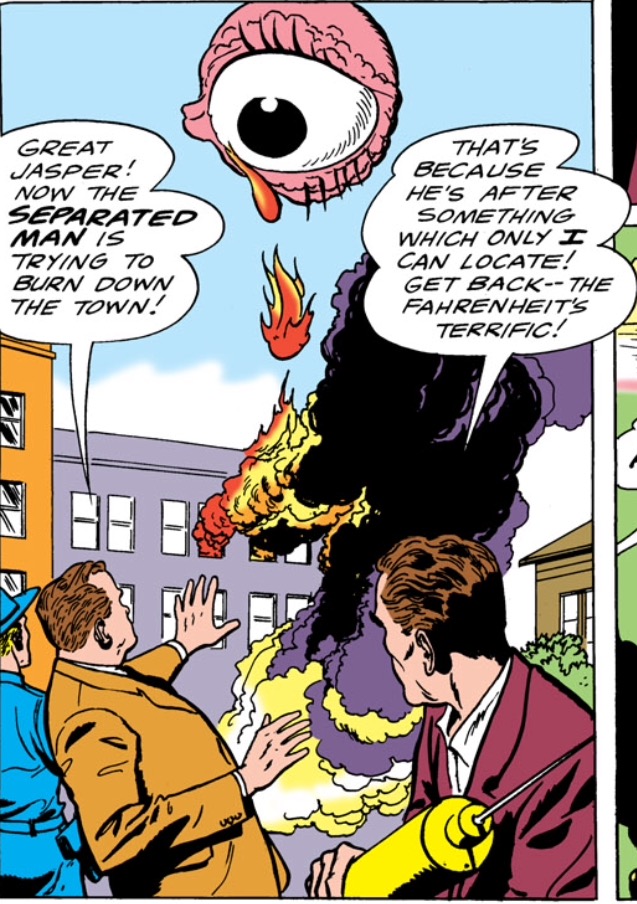 Howdy, Whatnauts.  I spent the vast majority of last week holed up at a silent with no phone, TV, or wifi.  I did, however, have a bunch of comics downloaded onto the iPad and when I got tired of experiencing enlightenment/napping, I did read a few books.  Join me behind the jump for the rumpus: 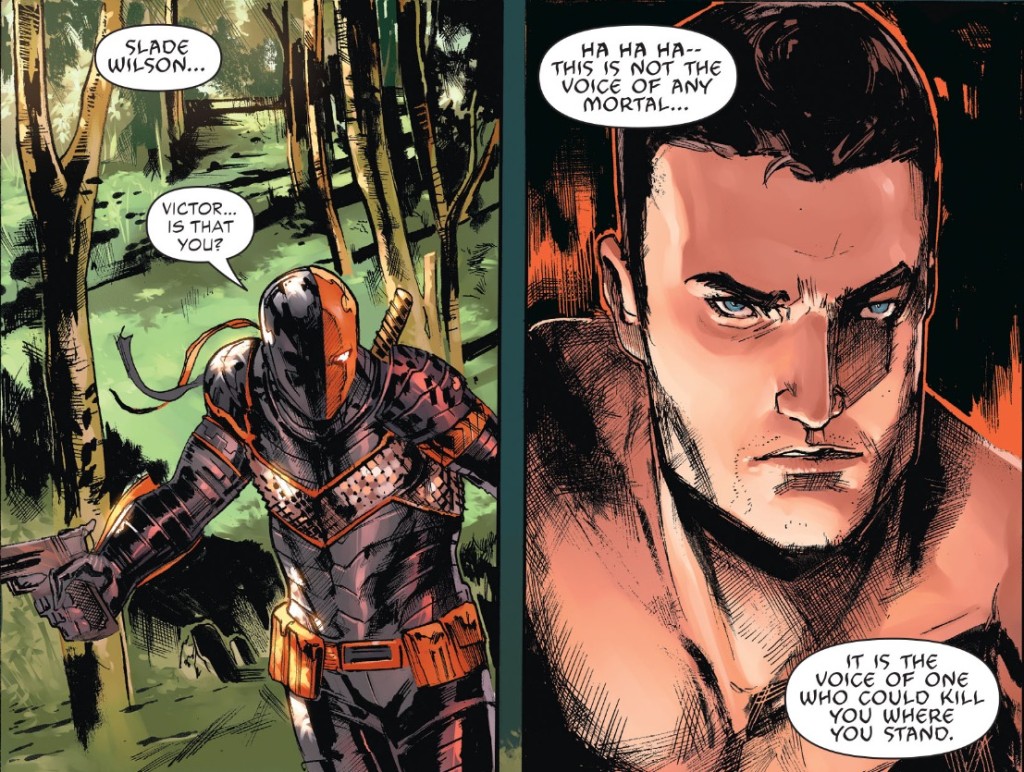 “Ha ha ha who is that in the second panel? The story never tells you!”

DC SNEAK PEEK: DEATHSTROKE:  I guess it’s an obvious sign that you’re not really feeling a comic when you can’t remember when you last read an issue—looking at Comixology, chances are good I bought and read up until issue #5?—but I’m nonetheless a bit bummed that Tony Daniel tapped out on the art chores for at least this preview “story.”  From what I can tell, post-Convergence, Mr. Daniel is still going to be taking an “all guest star/ all the time” approach to Deathstroke, as this sneak has Mr. Stroke both fighting the Teen Titans and getting recruited by Hephaestus to assassinate a god.  The book kind of has a “Jeph Loeb with severe head trauma” approach to its plotting, but has none of Loeb’s lightness of touch.  Kind of a bummer I can’t read a Deathstroke comic where he’s sniping people from the moon while eyepatched women in nurse’s outfits ready themselves to strangle him with their MurderStockings, but I guess that’s what I read manga for. 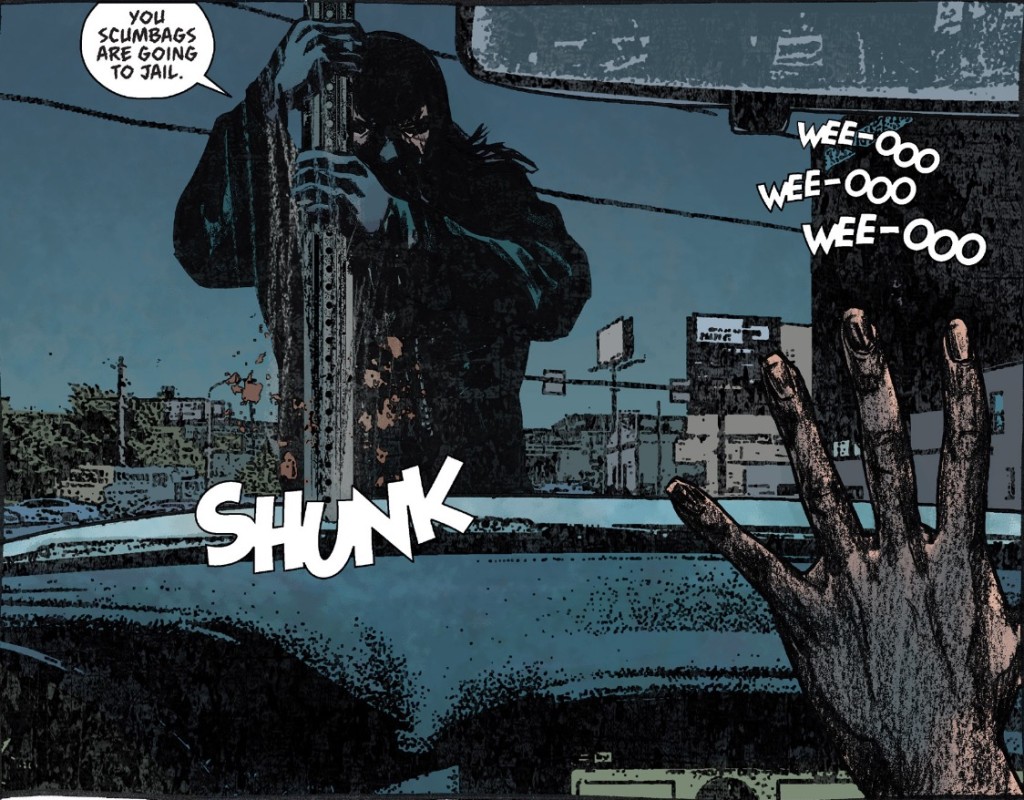 BLACK HOOD #3:  I really did adore the first two issues of this and somehow missed it at the shop, so this was last minute purchase on Comixology before radio silence.  And maybe because it was a slightly longer delay between this issue and the first two but…this issue felt off.  I don’t know if Swierczynski got the word publication plans had changed on this or if his cliffhanger at the end of issue #2 was ill-advised but this issue is where the taut narration goes crazily slack and a lot of “and then this happened, and then this happened, and then this happened” kicked into overdrive, with no scene given time to breathe and develop. For example, the resolution of the cliffhanger and the return to status quo is barely three pages: although it’s actually pretty on the money that a police officer caught in a very weird situation would probably be let go with little more than a change in his reputation, the scene has no chance to build any tension to it.  Graeme compared the first issue to Bendis’ Daredevil, and maybe that’s why I couldn’t see that although Bendis might’ve played the scene out for too many pages, we would’ve gotten the sense that something important had happened.

Anyway, I’m still on board but I hope this was just a one-time blip or I just didn’t read the book in the right mood or something.  If nothing else, the text pages in back still make me hold out hope that this can fulfill its promise as a mean little contemporary superhero noir. 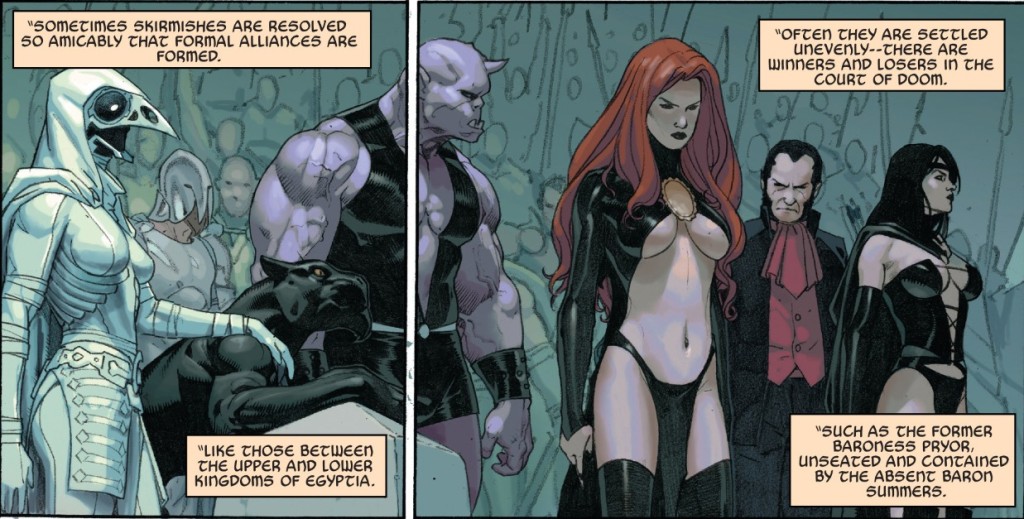 (There probably aren’t sensible shoes on Battleworld, either.)

SECRET WARS #2:  Something I picked up before the retreat but didn’t get a chance to read until the next week and it’s very much a “is the glass half-empty or half-full?” book for me (especially because I still haven’t read issue #1).  If I squint and think of it as a super-epic “What If?” story drawn and colored by slumming Heavy Metal artists and written by that guy who has hundred dollars in trade at the new & used fantasy bookstore, it’s kinda fun?  It really does look great, with Ive Svorcina’s colors dialing up or down the expressiveness of Esad Ribic’s art to tremendous effect, and it’s fun that Hickman hasn’t just worldbuilt the shit out of his crazy quilt setting, he’s chosen (at least for the issue) a nice narrative way in to all the courtly intrigue that gives him comic book boners.  (Speaking of which, I do love that at least one of the zombies drawn by Ribic looks suspiciously like good ol’ Necron, the Italian boner-sporting zombie from the early ’80s).  I enjoyed this one issue far more than I’ve enjoyed any issue of any other big Marvel event I’ve read—though long-time podcast listeners know all the caveats that come with that statement—and I feel this issue certainly stomps the issue of House Of M, that other alternate universe Marvel event.

And I will give Marvel this: it is a big event that fills like a singular vision, right down to the “God Emperor Doom” title page that you know Hickman has been working toward for something like three-plus years.

As something that is supposed to guide and shape the Marvel universe? Or as something that puts 50+ years of continuity to some other ends than “boy, look at all these great designs we can modify to get our cool stuff looking super-cool!”? It doesn’t really work for me yet.  Part of that may be that I’m just not down with this issue’s super-high louche factor, where I’m supposed to be ultra-tickled at how bitchy Mr. Sinister is.  Between the sacrifice of Brian Braddock’s brother and the final scene with old Thor, there is heroism on display here, but it takes a very definite back seat to the knee-slapper of making Dr. Strange into Dr. Zaius.

(And unless this event is going to go on for thirty-plus issues, the pacing is definitely off.  I can’t see anything getting wrapped up in anything but the most hasty, piecemeal way at this rate.)

Anyway, could’ve been a lot worse.

CAPTAIN ATOM #83-85:  I picked these up in one of the Convergence sales and they are mightily odd: it’s Ditko doing the pencils, plots, and designs with dudes like Dave Kaler and Gary Friedrich scripting with an 18 page Captain Atom story in the lead and a seven page back-up strip of the Ted Kord Blue Beetle.  The Beetle stuff is really fun, with Ditko making BB’s ship and its ability to pick up other vehicles in its mechanical legs a power all its own.  Issue #85 is basically pages and pages of the craft rescuing a damaged jet and then fighting off a spy sub, and then you get a malevolent octopus involved so…it’s great, basically. In another lifetime, the Blue Beetle and his Beetleship toys made Mattel a ton of money (and Steve Ditko would’ve been screwed out of in that lifetime too, I’m sure).

As for Captain Atom, it’s an interesting read, seeing a military-themed superhero undergoing the same kind of “everyone’s against me!  The public hates and fears good men!  Only through the ultimate sacrifice can I win!” moves Ditko used to such brilliant effect on Amazing Spider-Man.  The switch feels like a course-correction, a way for Ditko to make more clear his Randian beliefs: the biggest threat to the accomplishments of a great hero is the hateful, ignorant mass of the un-great.  (My god, I really can’t escape writing about sexy libertarianism these days, can I?)

For example, everything in “Finally Falls The Mighty!” in Captain Atom #83 is a bit we’ve seen on Ditko’s run in Spider-Man, most especially a scene of Captain Atom trying to absorb the power of an out-of-control nuclear reactor that has Ditko managing to evoke the Spidey vs. heavy machinery scene of “If This Be My Destiny…!” without any panel of the former resembling any panel of the latter.

Sadly, writer Dave Kaler is no Stan Lee, and despite all attempts to give Atom a broad supporting cast, the book is a sludgy read. It’s a shame because Ditko’s design-heavy art is appealing as hell and buttery-smooth in how it leads the eye over the page, but really Ditko’s got nobody to blame but himself here.  Without the framework of teenagerhood, and especially the specific framework of Peter Parker, Ditko’s suffering heroes are more bathetic than sympathetic, less like avatars of heroic isolation than thin-skinned martinets with serious communication problems. 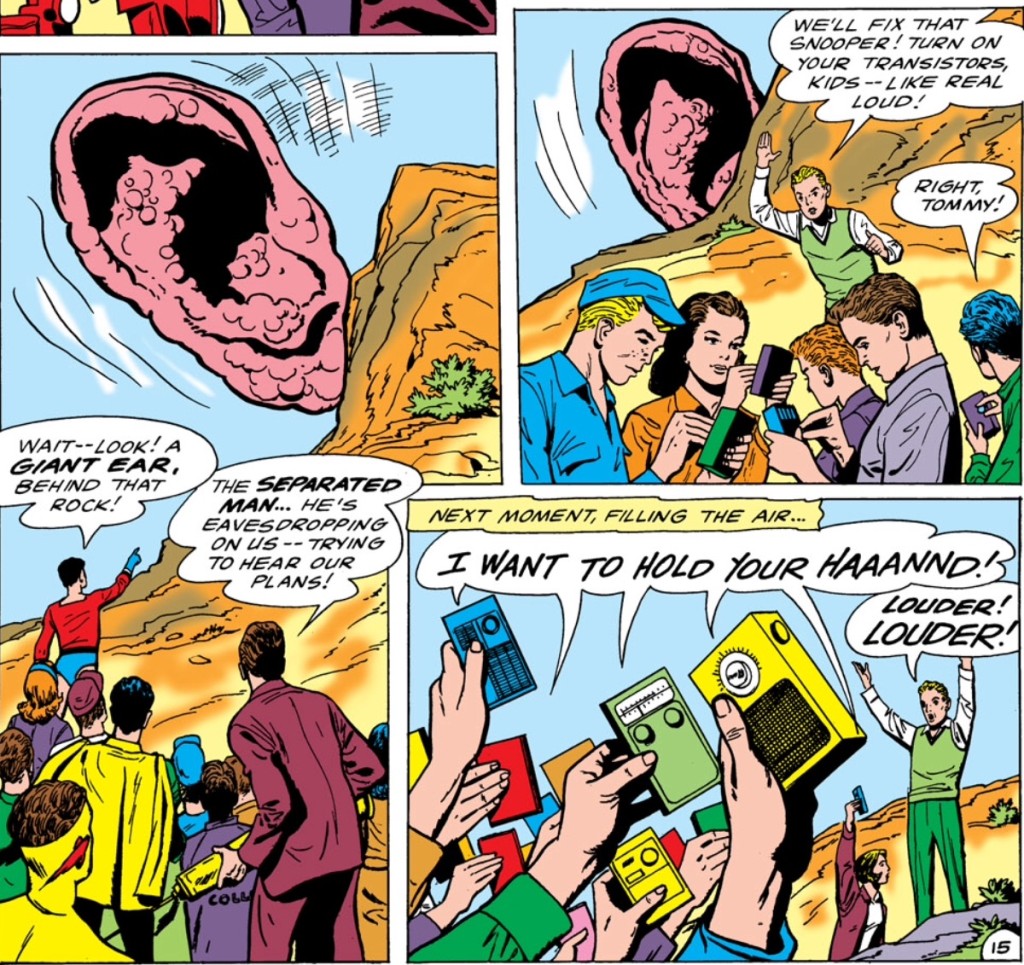 I’m sorry, it’s kind of impossible not to love this scene.

BRAVE AND THE BOLD #60:  Fortunately, at the other end of the “goofy ’60s comics I picked up during a Convergence sale” spectrum there’s this wacky Teen Titans comic written by Bob Haney and drawn by Bruno Premiani.  Premiani, the artist who co-created the original Doom Patrol, lends his gift for blending realistic illustration and absurd situations to divinely surreal ends for Haney’s story.  That story, which involves a bunch of Midville teens attempting to impress their elders by running the town for a day being thwarted by the giant disembodied hands, feet, and other body parts of The Separated Man, is typical Haney lunacy, with the Teen Titans arriving to help the kids of Midvales prove to their square parents that they would indeed be cool enough to clean up the city square if, like, giant hands didn’t keep ripping the roofs off nearby buildings, man.

Considering there’s a scene where someone spots a giant ear floating behind a mesa trying to overhear the teens’ plans, and that leads to the kids driving it off by  holding up their transistor radios and blasting the Beatles’ “I Want To Hold Your Hand,” I think it’s safe to say the script already has the sublime and the ridiculous already mixed up, but extra touches like having a giant eye float over the town and weep flaming tears to set things on flame, or that eye scooting off when thwarted like a retreating Philip Guston self-portrait really took this over the edge for me.

Additionally, I don’t know if Premiani read the title of the story as “The Astounding Suppurated Man” or he just wanted to work in a killer pun, but each gigantic body part that shows up to make trouble is covered in pustules leading to the proper amount of readerly unease.  The next time this issue comes up on sale on Comixology, I recommend picking it up: it’s definitely worth your time and the ninety-nine.

Speaking of time, that’s it for me.  Kind of a shame because there were these *mind-blowing* issues of Daredevil I wanted to talk about, but I guess those will end up either being covered on the podcast or the next time I write here.  Keep watching the skies, true believer!

One comment on “Smaller Bites: Capsule Review-Type Thing-os From Jeff”