Programming note: Patreon supporters! If you didn’t receive an email from us yesterday, let us know! If you’ve not checked out the mysterious seasonal extra currently on offer, you really should. Everyone else: Go on about your business. Nothing to see here.

Given both my love — part-nostalgic, part-it’s-just-good — for 2000AD as a comic book and Doctor Who as a television show, I’m actually surprised that it took me so long to come around to sampling the British Doctor Who comic strips of recent years.

It’s not that I’ve stayed away from Doctor Who comics in total — I’ve read a swath of the IDW and Titan versions created for the U.S. market in recent years, and enjoyed them to varying degrees (Short version: the Andy Diggle, Brandon Siefert and Paul Cornell-written IDW books are pretty good, and Titan’s Eleventh Doctor series is downright great) — but a combination of problematic distribution and, honestly, lack of interest kept me from hunting down the collected editions of the strips that run in the British Doctor Who Magazine. That, it turns out, was a mistake.

It was a mistake not because the stories in the two collections I read over the last week — The Crimson Hand, a Tenth Doctor sequence, and The Child of Time, the first Eleventh Doctor story arc — are good Doctor Who, with exactly the right tone of derring-do mixed with impossible, epic ideas and down-to-earth sentimentality, although they certainly are; of the two, The Crimson Hand is the most successful, I think, because it takes that tone and tells stories that are beyond the budget of the show, fitting in well with the Everything-But-The-Kitchen-Sink ethos of the Russell T. Davies era of the TV series but without the cheapness of special effects or tendency towards pantomime, but The Child of Time increasingly feels very much like an Eleventh Doctor season as writer Jonathan Morris gets used to the character (The early comics being written before Matt Smith’s episodes had aired).

It’s also not because all of the comics in these collections are good comics, with some being excellent. There’s a wealth of talent on display in these two books, with Dan McDaid, Paul Grist and Roger Langridge amongst the creators involved — McDaid writes The Crimson Hand in addition to drawing some of it, and I had no idea he was such a great writer; he’s now very much on my “Why haven’t the Big Two grabbed him yet?” list of creators — as well as creators relatively unknown in the US, like Martin Garraghty and David Roach, there’s a level of quality that never dips below “solidly enjoyable” throughout each 200+ page collection. 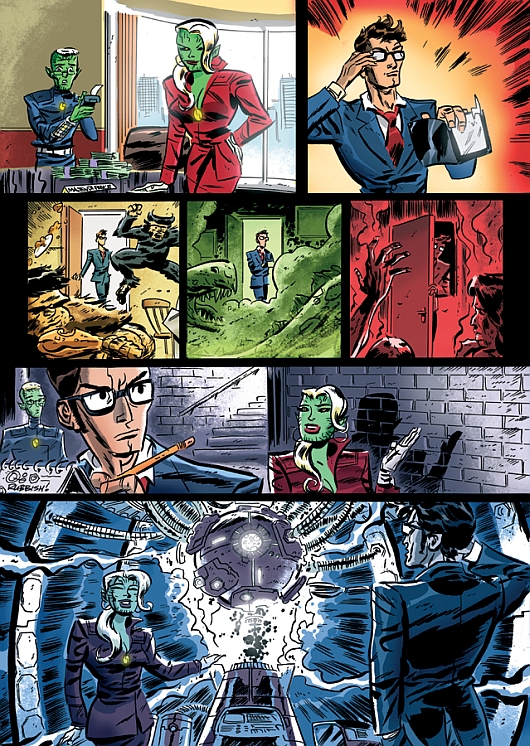 But what made both books utterly compelling to me, beyond the comics, were the notes at the back. Both editions — and, I believe, all of the British Who collections of recent years — feature extensive creator commentary, including from both Morris and McDaid their initial pitches for the stories contained in each collection, as well as open discussions about what got changed and why. In some cases, those changes are relatively minor — an editor nixes a particular sequence, or tightens up a scene — and in others, major: Morris writes about having to drop more than half of his planned arc midway through the run when it turns out that Neil Gaiman’s Who episode in 2011 was going to use some of the same plot beats, while McDaid throws out a couple of storylines because, simply, they didn’t fit. For a process junkie like me, it’s catnip, all the moreso because everyone involved is impressively free of ego (Langridge, for example, writes about not being able to capture Matt Smith’s likeness, a moment of humility that seems unthinkable in the US industry).

These books are very different from the Doctor Who created for the US market — each “issue” is only 10 pages, for example, and the plots are closer to the TV show in some indefinable manner — but no less worthwhile as a result. They offer an alternative to the US-influenced storytelling of the other comics, something that’s at once more open to experimentation and breaking format and more conservative, and that tension between those “feels” more like Doctor Who than any other comic version than I’ve read. Combine that with the behind-the-scenes looks that are packed in with each volume, and the result is something I’ll eagerly be looking forward to more of. Especially if it means I can get more Clara considering what’s been going on in the show itself…