Previously on Drokk!: Technically, last episode we took a detour on the read-through of all the Complete Case Files to dip into the Restricted Case Files and look at Judge Dredd stories from outside the main 2000 AD series, but really: We’re up to the tenth year of Dredd, and Mega-City One is now pretty much a hellish dystopia and the Judges are as trapped by the system as those they’re technically protecting. That’s all you really need to know.

0:00:00-0:08:26: We introduce ourselves and the fact that we’re reading Judge Dredd: The Complete Case Files Vol. 10, which covers 2000 AD Prog’s 474-522, from 1986 and 1987, and then we almost immediately derail ourselves by talking about the fact that this collection offers a coherent deconstruction of Dredd and his world despite the fact that it wasn’t originally intended to be collected. Were writers John Wagner and Alan Grant just looking for an excuse to redefine Dredd, or trying to keep themselves interested? 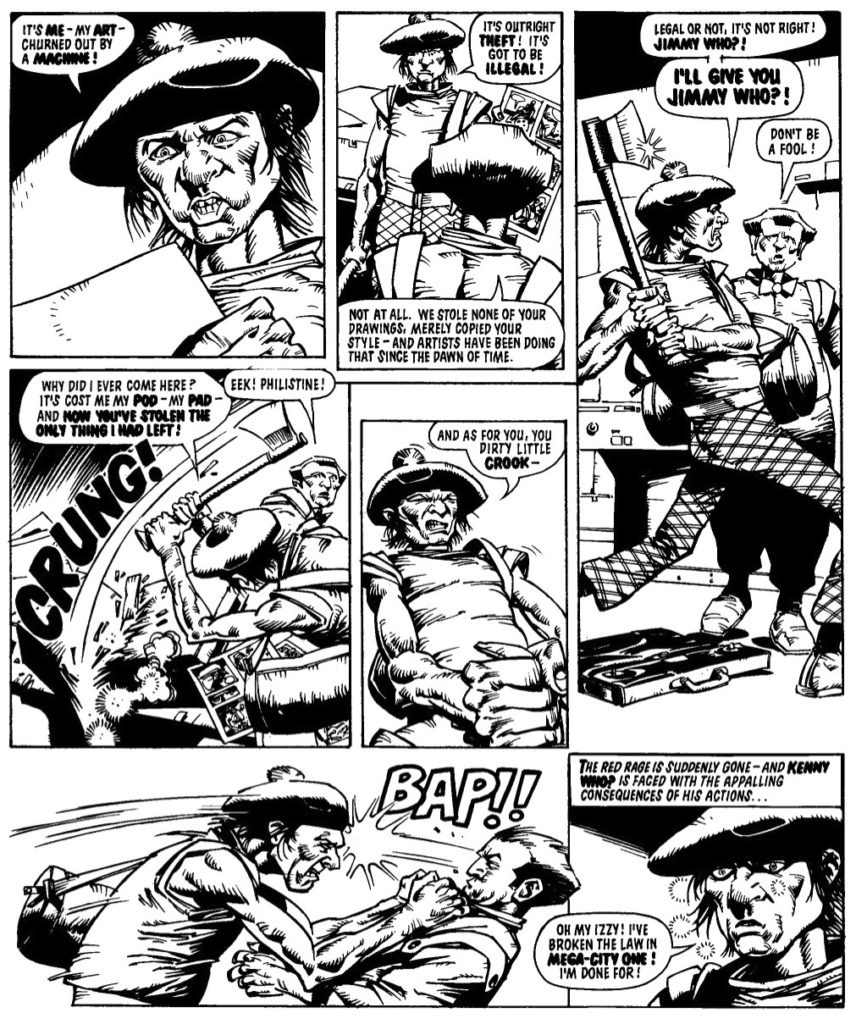 0:08:27-0:22:28: Is the idea of being a success in the comics industry the cruelest joke ever told in Judge Dredd? We talk about “The Art of Kenny Who?” and what it says about the strip’s relationship with comedy and authority. We also talk about the impossibly strong opening to this book, the influence of both EC Comics and Kafka, and what the strip is actually about at this point in its existence.

0:22:29-0:47:28: Is Judge Dredd a bully? Well, yes, but this volume really seems to be determined to demonstrate that, to the point where it’s difficult to see Dredd as anything but. We talk about that, as well as how cruel the character has become, and how slowly that change has been. (Also, has the character changed? Jeff thinks it might be that the creators have changed, instead, which is an interesting point of view.) Also, because it’s Dredd from the 1980s, racism rears its ugly head in “The Fists of Stan Lee,” and we get into the fact that this is very clearly an era of the strip where Wagner and Grant are lifting directly from whatever they’re watching, listening to, and so on. 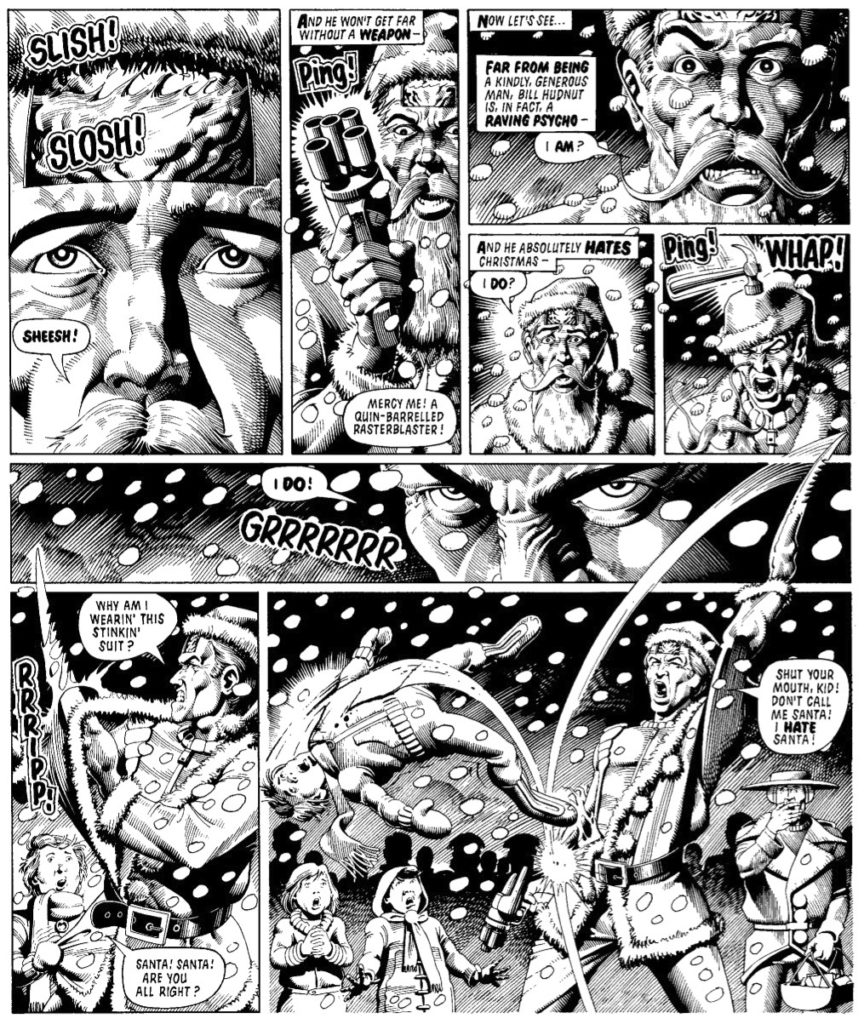 0:47:29-0:59:14: Jeff, bless him, thinks that I managed to time this volume to this month because of the very strange Christmas episode in the book. I didn’t, and I’m not as taken by the story as he is, but we talk about whether or not it’s a wink to the audience that everything’s fine, really, or a sign that things are worse than they seem. My need for narrative closure shows up, and Jeff is a prince amongst men for not making fun of me for it. 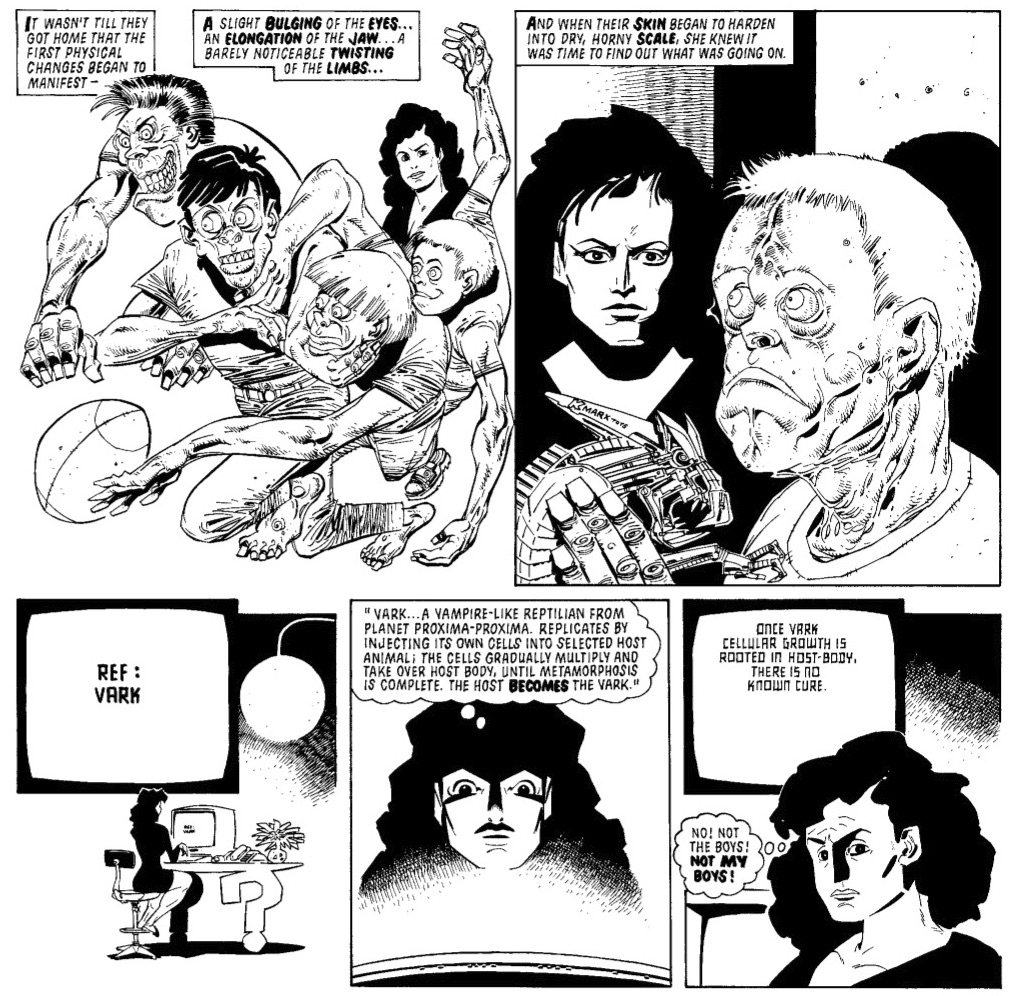 0:59:15-1:26:57: We speed through another few stories in the volume, touching on the greatness that is the name “Slick Dickens,” Jeff’s being creeped out by Kevin O’Neill art (and my sharing a possibly apocryphal story about Kevin O’Neill and the Comics Code Authority), and the greatness that is Brendan McCarthy’s artwork on “Atlantis,” a storyline which Jeff compares to Jim Thompson, of all people. We also talk about about Jack the Ripper and Michael Jackson, or at least the versions of them that re-appear in this volume in a way that may or may not be connected. All this, and Harlan Ellison, too! 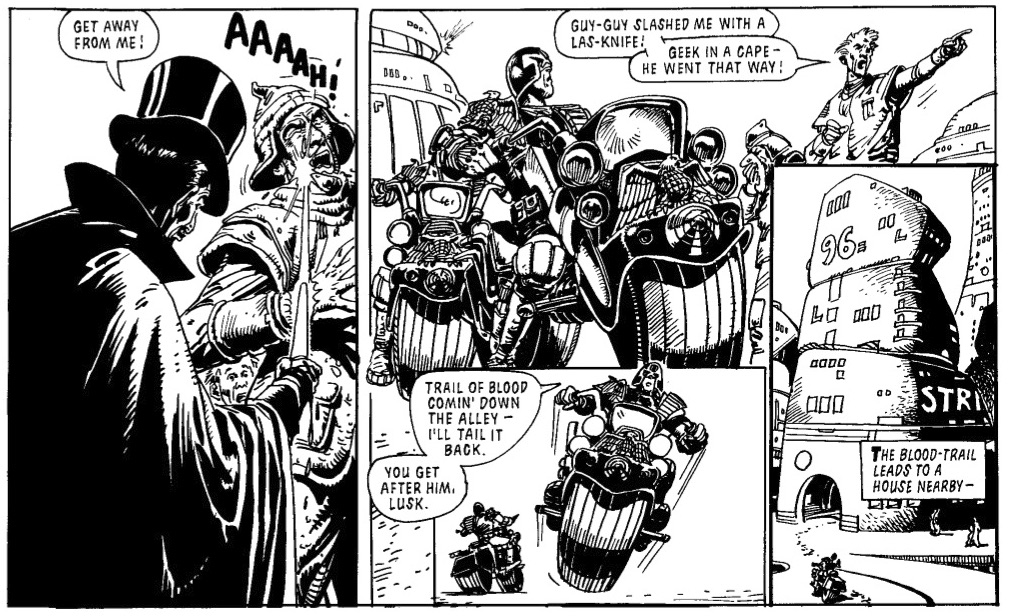 1:26:58-1:39:11: Finishing off going through stories, we touch on a few more, and talk about the brutality and rejection of nostalgia present in this book, even as the strip celebrates its 10th anniversary. Jeff talks about what might be his favorite moment in the book, while I share what I think is the most important line in the entire volume, and we end up talking about how prescient the series is in its approach to certain topics, even if that seemed like science fiction three decades earlier. Is this the British version of Jack Kirby’s OMAC in that respect…?

1:39:12-2:02:34: We wind down by talking about just how much we love this book (Spoilers: a lot), and the level of craft that Wagner (and Grant) have maintained for almost a decade at this point, and the complexity of tone and content that we’ve just come to accept and expect from Judge Dredd as a strip without really thinking about it. We also talk briefly about yet another short serial in this volume, this time one that I’m a big fan of while Jeff is far cooler. Basically, though, these are comics done right and we want to see more of this if possible. (There are many more volumes, so it’s pretty possible, really.) 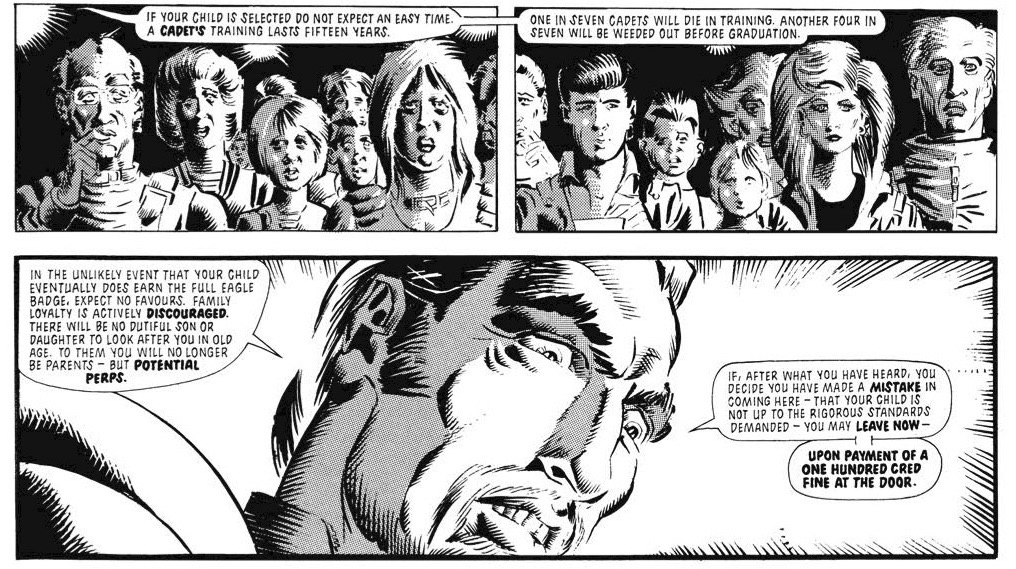 2:02:35-end: As the end approaches, we swiftly wrap everything up by mentioning the Twitter, Tumblr, Instagram and Patreon, while somehow failing to wish you all a happy Christmas and Hannukkah if you celebrate either What were we thinking? As always, thank you for listening and reading; we’ll have a year-end episode next week, but until then, I’ll do it here: Happy Holidays, Whatnauts.