Previously on Drokk!: We are firmly in the Garth Ennis era of Judge Dredd by this point, which has so far included a climax to the growing democracy story arc that concluded, stunningly, that fascism is apparently really cool because Judge Dredd is tough. If you think that’s the nadir of the strip, just wait. 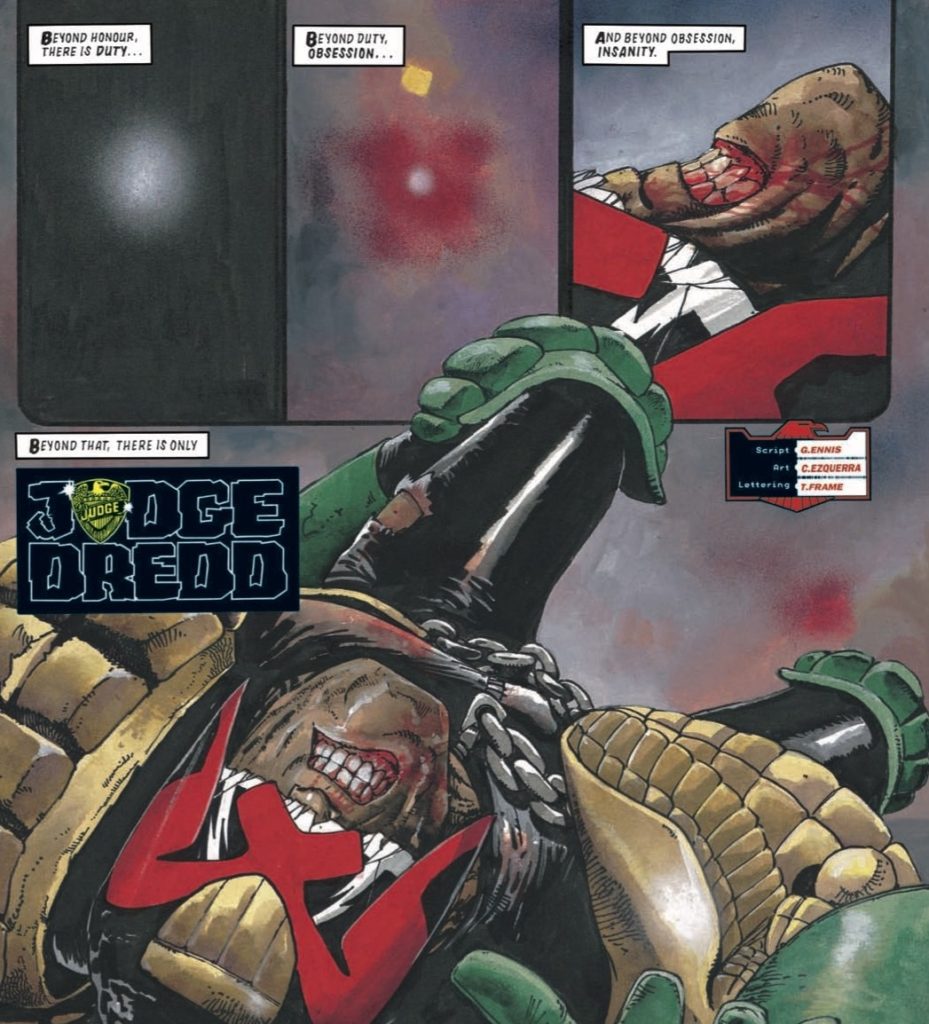 0:00:00-0:03:08: Another swift introduction for this episode, as Jeff and I let everyone know who we are and that we’re reading Judge Dredd: The Complete Case Files Vol. 17 and Batman/Judge Dredd: Judgement on Gotham this episode, with the latter perhaps the sole thing from preventing both of us from being overwhelmed by the Young Garth Ennis of it all. 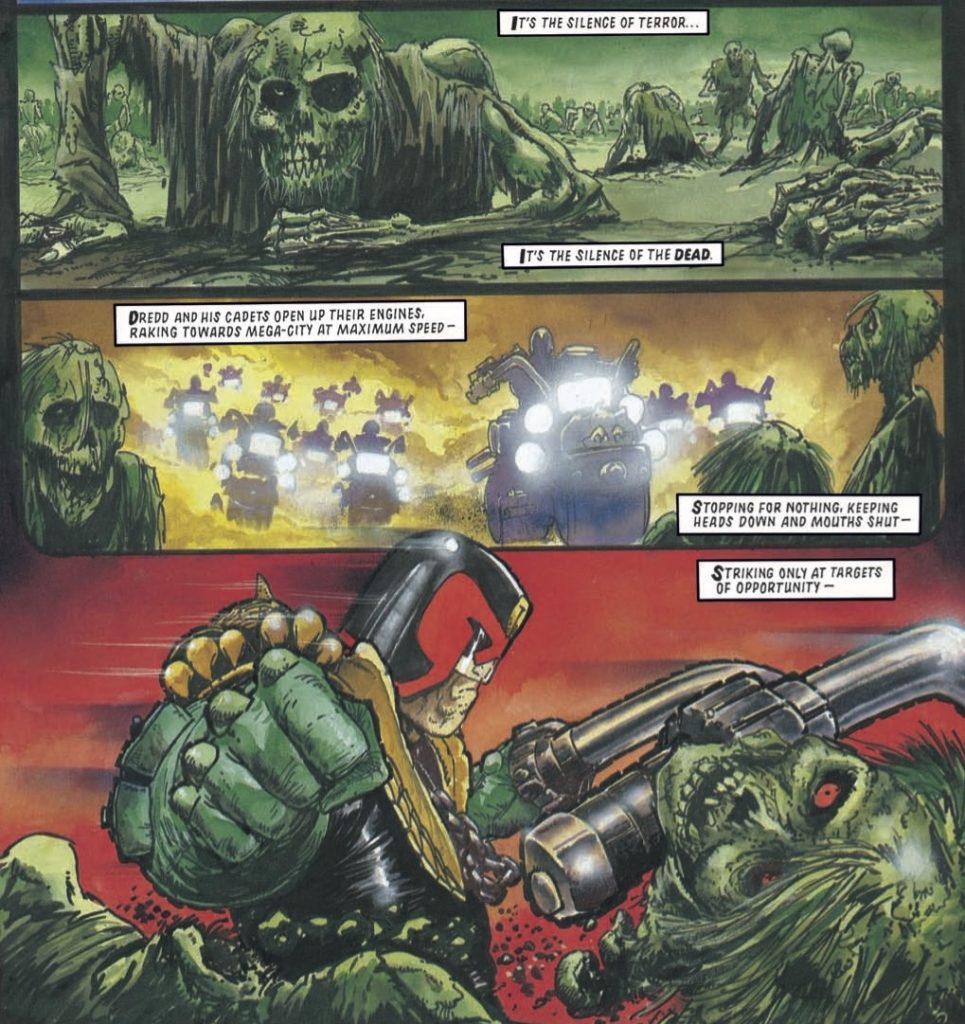 0:03:09-0:26:16: I misdirect us a little bit at the start by pointing out that, at the same time Ennis was writing these (very bad) Dredd stories, he was also writing Hellblazer for DC, which was… far better than this…? This leads us to a somewhat more-fragmented-than-usual discussion about the importance of artists on making Dredd work — especially Carlos Ezquerra, in this volume — and what Jeff calls the “zen koan” of what makes an effective Dredd story in terms of writing. We also touch on Judgement on Gotham earlier than intended, Simon Bisley and Chris Halls, and debts owed to Bill Sienkiewicz. 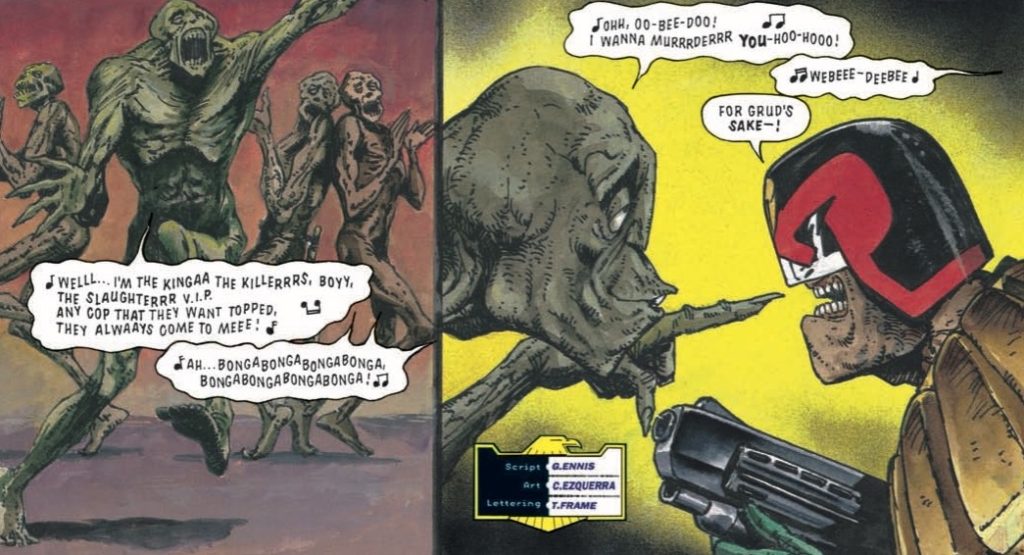 0:26:17-1:06:59: We dive into “Judgement Day,” the massive mega-epic that takes up fully half of Case Files 17 and fails so utterly on so many levels. On the one hand, it’s a big deal — not just the first crossover between 2000 AD and Judge Dredd Magazine, it’s also a crossover between Judge Dredd and Strontium Dog, with the latter guesting in basically the entire story. Unfortunately, as we cover at length, “Judgement Day” is a mess — a zombie story that doesn’t really understand zombie stories or know what to do with them, that passes up every available opportunity to say something interesting about its characters, that doesn’t necessarily comprehend how to pace a story, and one that doesn’t seem to understand that telling the reader that a bunch of people are in trouble isn’t the same as actually demonstrating it. Jeff suggests that Garth Ennis is getting worse when it comes to Dredd, but I’m not necessarily convinced, and we approach the idea that this is Ennis at a stage in his career where he’s not yet realized that other people aren’t quite as fascinated by the myth of the tough guy that can withstand everything thrown at him as he, himself, is. Suffice to say, we’re all in on just what a bad choice for Dredd Ennis is, at least in this particular phase of his career. 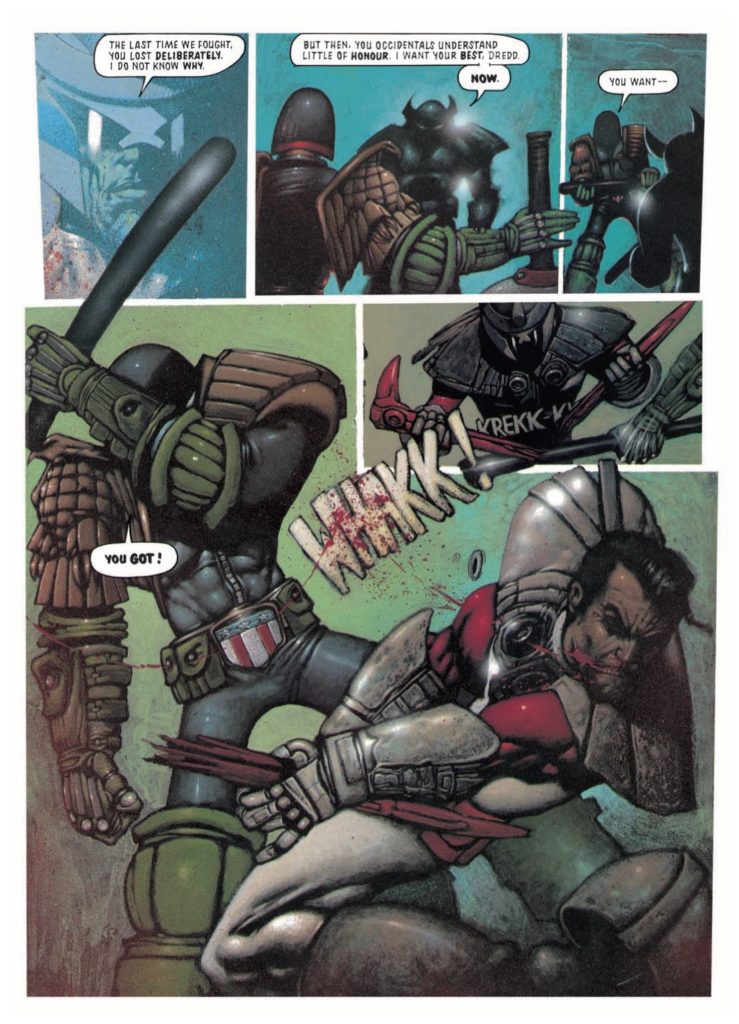 1:07:00-1:15:57: Spinning out of the above, Jeff suggests that the comics in Case Files 17 might be both creatively and morally bankrupt — at least in the eyes of a fictional Gary Groth — which brings us to a discussion of whether or not this is the fault of creators who clearly weren’t ready for the gig just yet. Was 2000 AD that creatively desperate, or was this the result of those involved feeling that Dredd needed a reinvention after more than a decade, and just making poor decisions when approaching that reinvention?

1:15:58-1:37:33: If the new guard creators is failing Dredd, then surely the old guard are doing better, especially in a high-profile project like Batman/Judge Dredd: Judgement on Gotham? The answer is… fine, more or less…? The first crossover with Batman is a fun read, but a throwaway one that relies more heavily on Simon Bisley’s artwork than the writing to make it work. Jeff has an explanation as to why that may be, even as both of us are disappointed by how some of the characters are written. This brings us back to a comparison between John Wagner and Alan Grant, and Garth Ennis, and how disappointing the latter seems by comparison — and whether or not that’s his “fault,” or simply a sign that, perhaps, a 22-year old fan didn’t stand much of a chance when replacing creators who have been working for pretty much as long as he’s been alive. 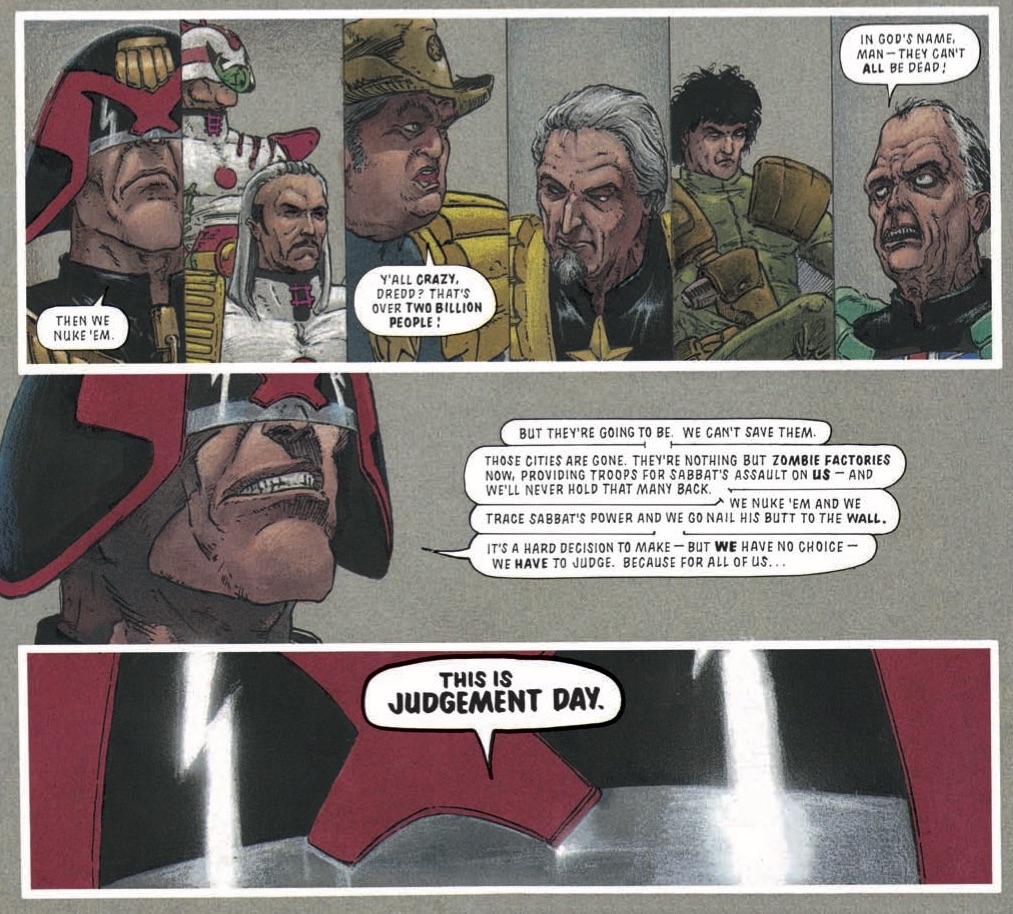 1:37:34-1:44:33: As we start to close things up, I talk about it having been a rough episode in terms of reading material, and admit that I cheered myself up by reading the current Dredd serial in 2000 AD, which prompts Jeff to detect a sign of optimism — that we know that both Dredd and 2000 AD have better days ahead after just how poor this particular material is. 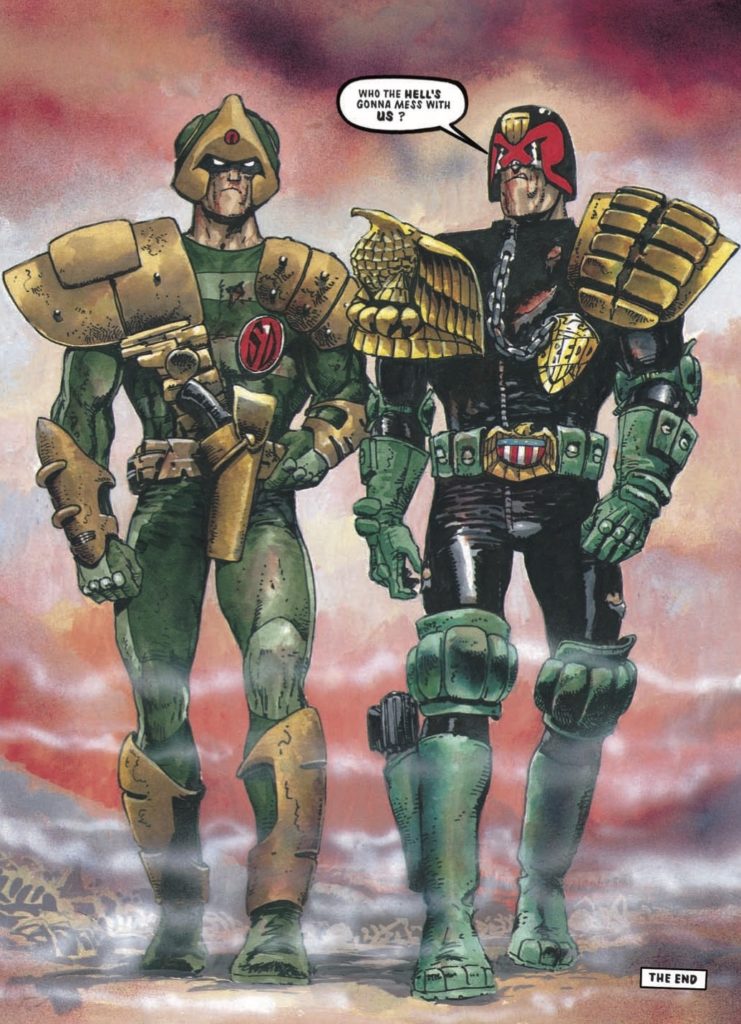 1:44:34-end We look ahead to the next episode, which sees John Wagner come back for more than three episodes at a time, Jeff asks about my love for the final panel in “Judgement Day” despite my intense dislike for the rest of the storyline, and we mention, as always, the Patreon, Twitter, Tumblr and I-swear-I’ll-use-it-again-soon Instagram. If you made it through all of this, we’re very grateful. It wasn’t easy.