Previously on Drokk!: After more than a decade, John Wagner stepped back as the lead writer on the strip, allowing a hungry new up-and-comer, Garth Ennis — then still in his teens — his big break. It wasn’t good, but things were about to get much worse. 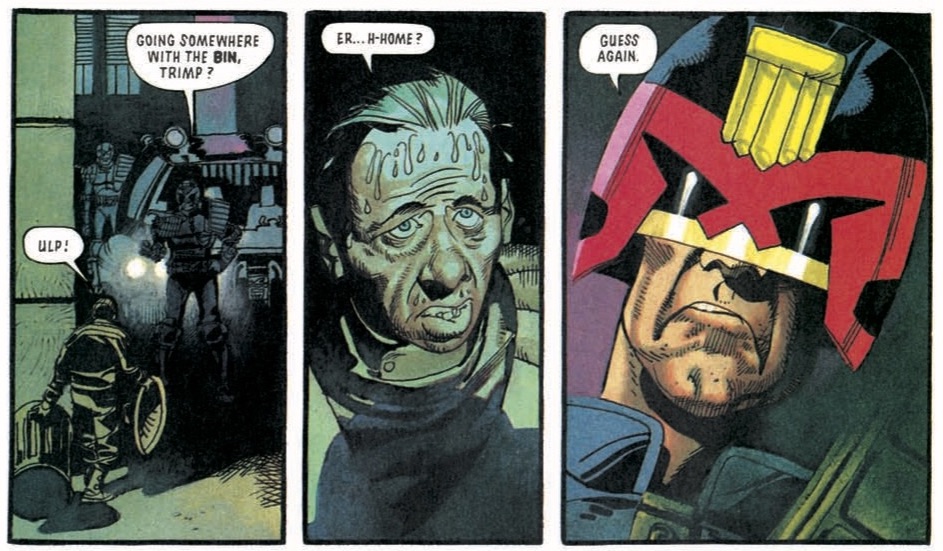 0:00:00-0:02:44: In a particularly speedy introduction — assisted by the shortest cold open in Drokk! history — I’d like to think that Jeff and I make two things very clear. Firstly, that we’re reading Judge Dredd: The Complete Case Files Vol. 16 this time around. And secondly, that these are some very bad comics indeed. 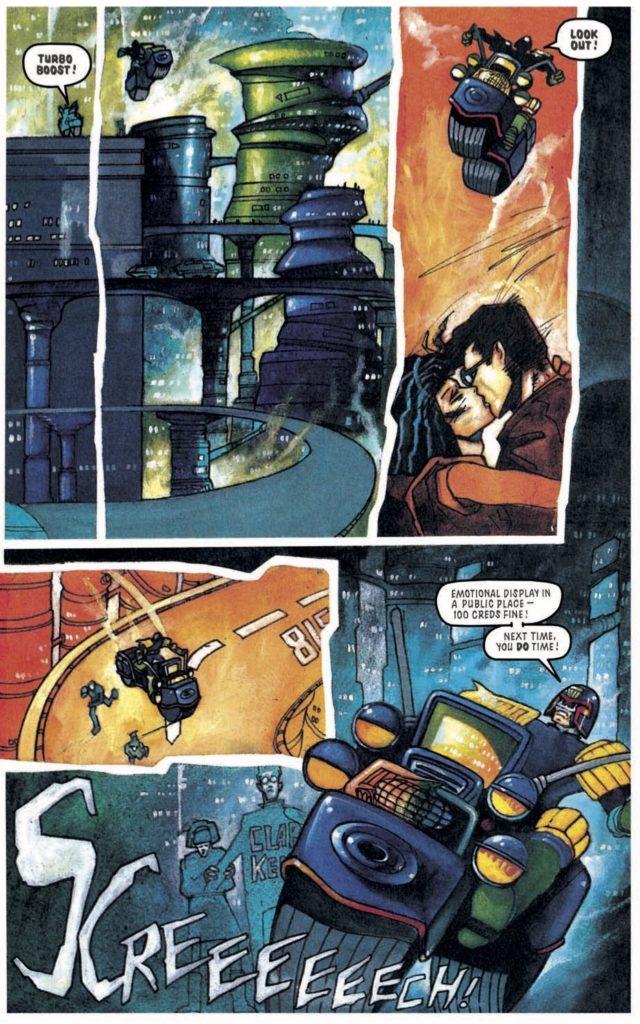 0:02:45-0:08:56: We’re going to spend most of this episode talking about the failures of the writing in these stories, as is our traditional focus, but it can’t be overlooked that there’s also some very poor artwork to be found in this collection, from a number of artists whose later work was very good indeed. There’s also some great stuff — I love John Burns’ work on Dredd a lot — but the shadow of Simon Bisley falls heavily on the work here, sadly, as I explain. 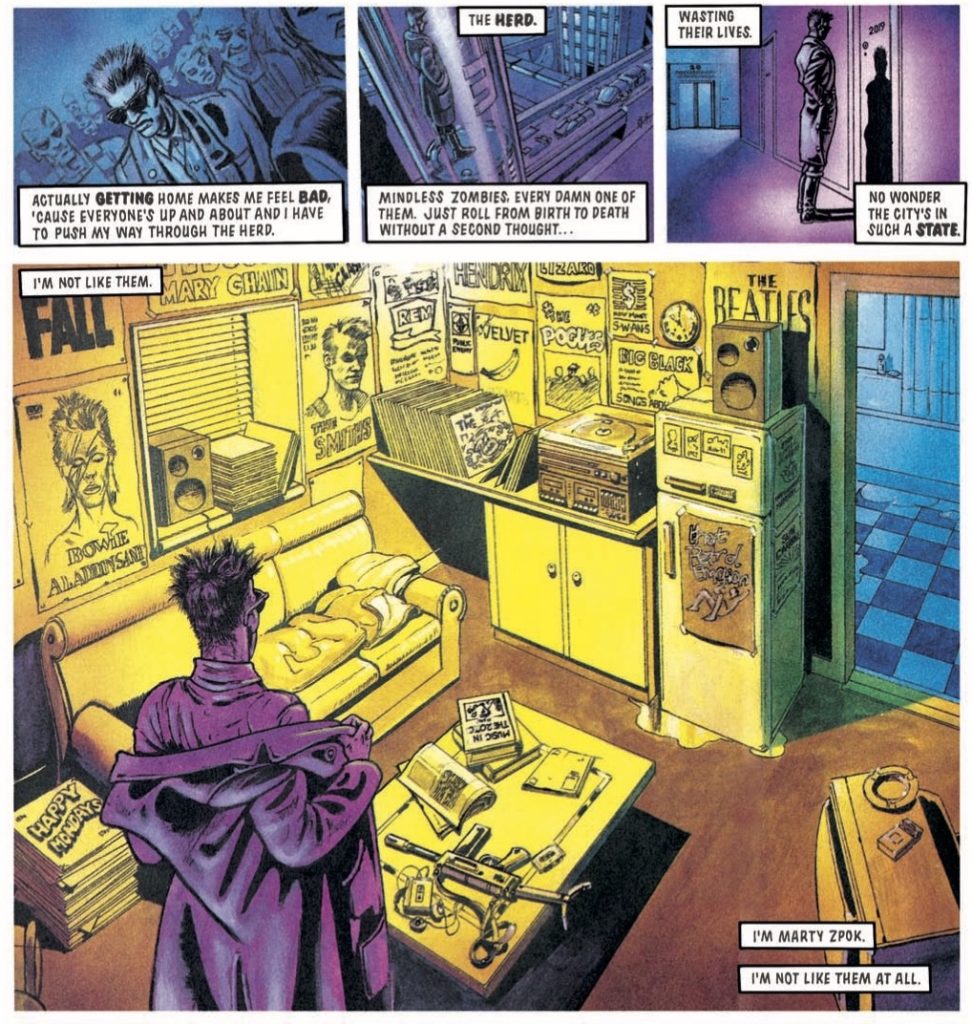 0:08:57-0:42:49: So, why is Garth Ennis not succeeding here? We go hard on the topic, while also going hard on Ennis himself — or, at least, the 20-year-old writing the stories collected in this volume. That he’s only 20 is likely a contributor, as is the fact that he’s probably feeling all kinds of pressure taking on a strip that he clearly idolizes maybe a little too much to allow him to be effective. Where are the editors, we ask, while also blaming Ennis for writing a particularly flat Dredd and failing to give any other characters (with one notable exception) any kind of life whatsoever. Mr. Lester has a theory about why that might be, and it’s a pretty compelling one. 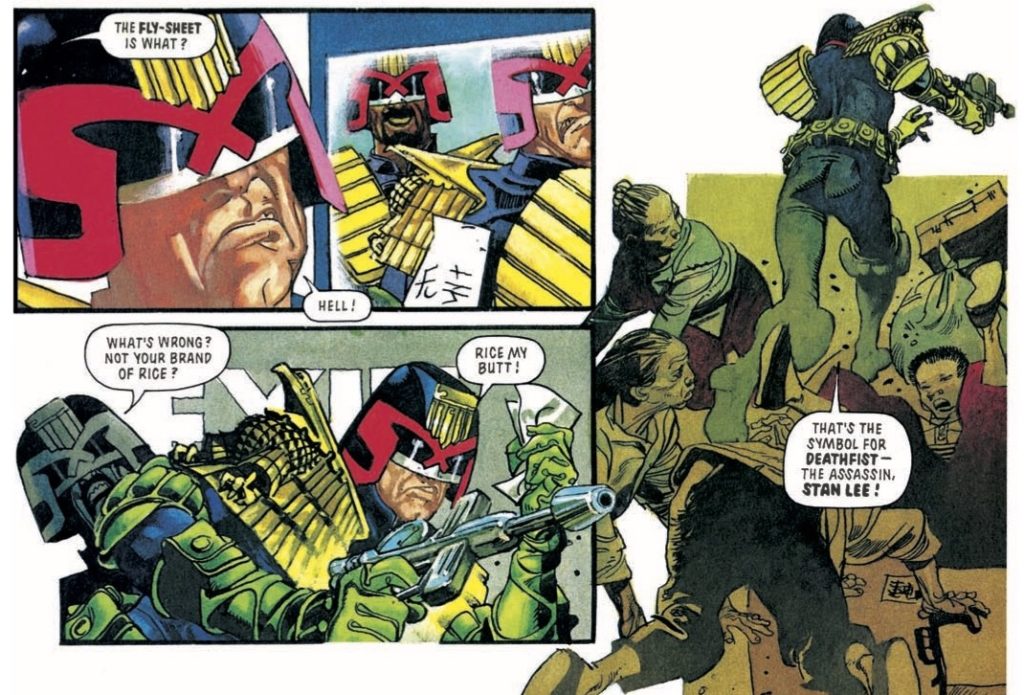 0:42:50-0:52:30: It’s not just the newcomers that are letting the side down here, though; Alan Grant contributes a number of stories to Case Files 16, and they’re uniformly bad, as well, lacking character motivation and exposition, but unfortunately including a side helping of racism that’s genuinely shocking to read when it appears. There’s also a resolution to a long-running plot thread that we’d forgotten, and also a reminder that, when surrounded by a collection of truly subpar work, even “barely competent” suddenly feels like a breath of fresh air. 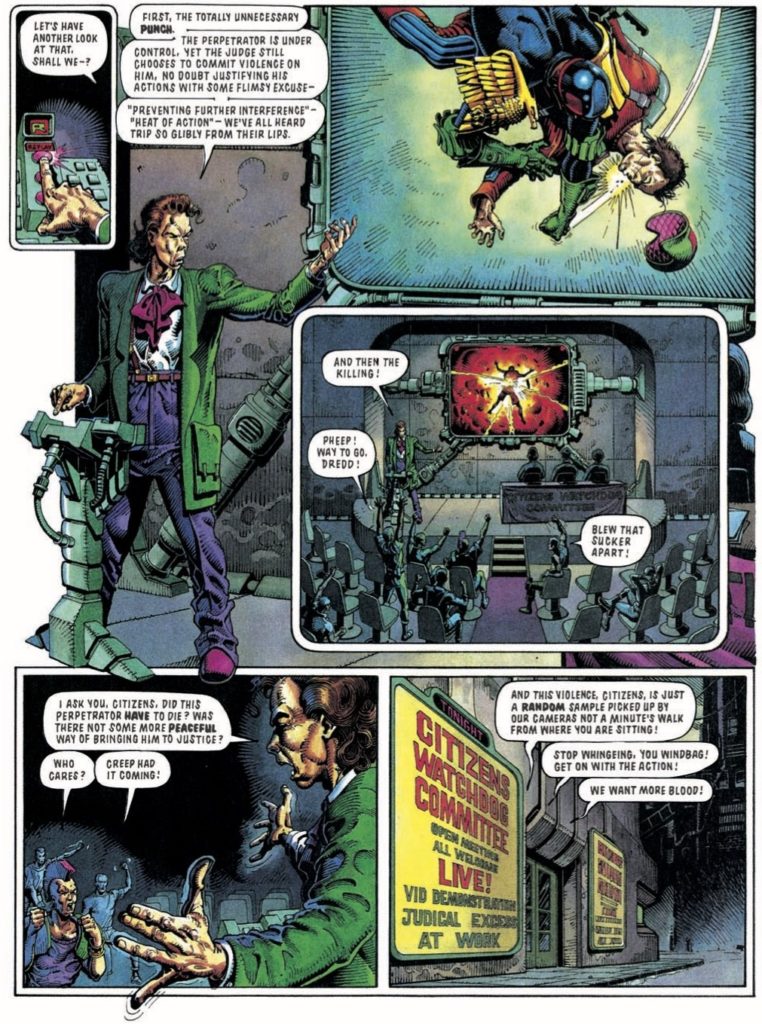 0:52:31-1:03:41: Jeff’s attempt to get me to pick a favorite non-John Wagner story from the book backfires as I pick a John Wagner story — “Watchdogs,” one of only two in this collection — leading to me taking on Jeff’s traditional role of projecting meta text into what we’re reading; Jeff isn’t convinced, but it leads into a brief discussion about what Wagner can do that Ennis and Grant solo aren’t able to, and asks the question, “How much can a good artist save a bad story?”

1:03:42-1:07:47: A very brief digression brought about by Jeff referencing the Judge Dredd pinball game (of course) has us pondering the fact that this book, featuring work published 14 years into the strip’s existence, feels as if it’s the kind of uncertain, what-is-this-strip-about, thing that should have come at least a decade or so earlier. Such is the power of Wagner’s hold on Dredd, it seems. 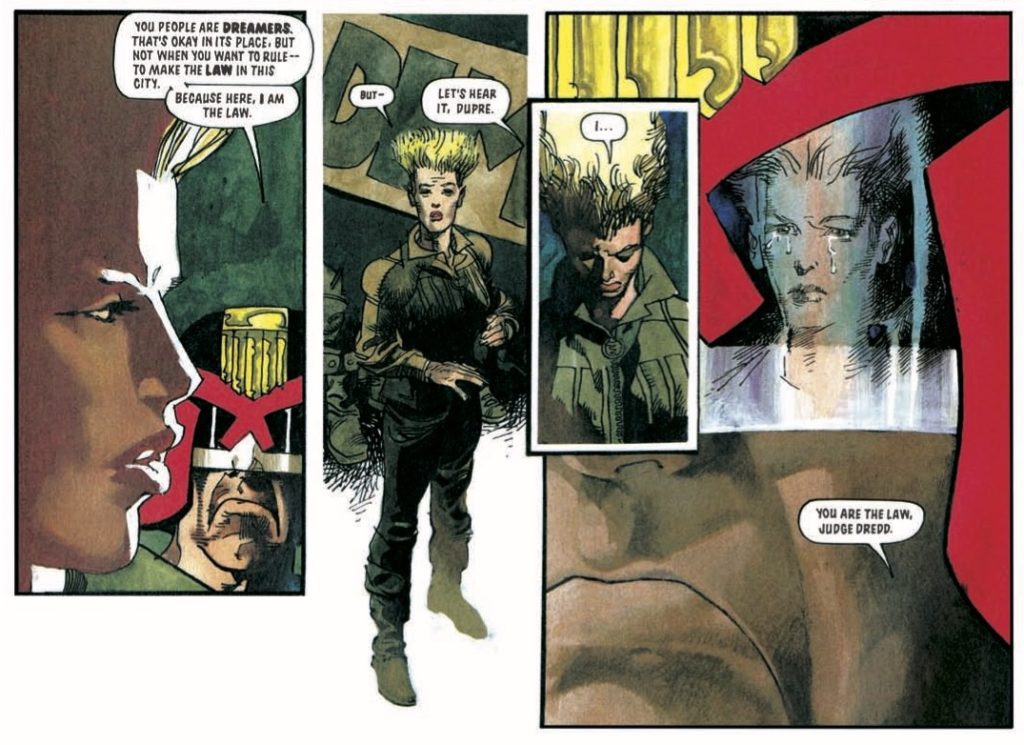 1:07:48-1:29:52: At the heart of the collection are two stories — Wagner’s “The Devil You Know” and Ennis’ “Twilight’s Last Gleaming” — that tie off the democracy storyline, and seem almost in conflict with each other. We try to talk about that without being overpowered by my strong visceral hatred of Ennis’ contribution, and… almost succeed? Well, almost-almost, at least. Covering “Twilight’s Last Gleaming,” we discuss the ways in which it betrays Wagner’s Dredd as a character, humiliates Blondel Dupre and the democracy storyline as a whole, and arguably reveals Ennis as a pro-fascism writer with a weakness for a strong man leader who disregards morality and the norms in the name of maintaining the status quo. It’s a story that arguably doesn’t even make sense given what’s come before, but at least it looks nice…? 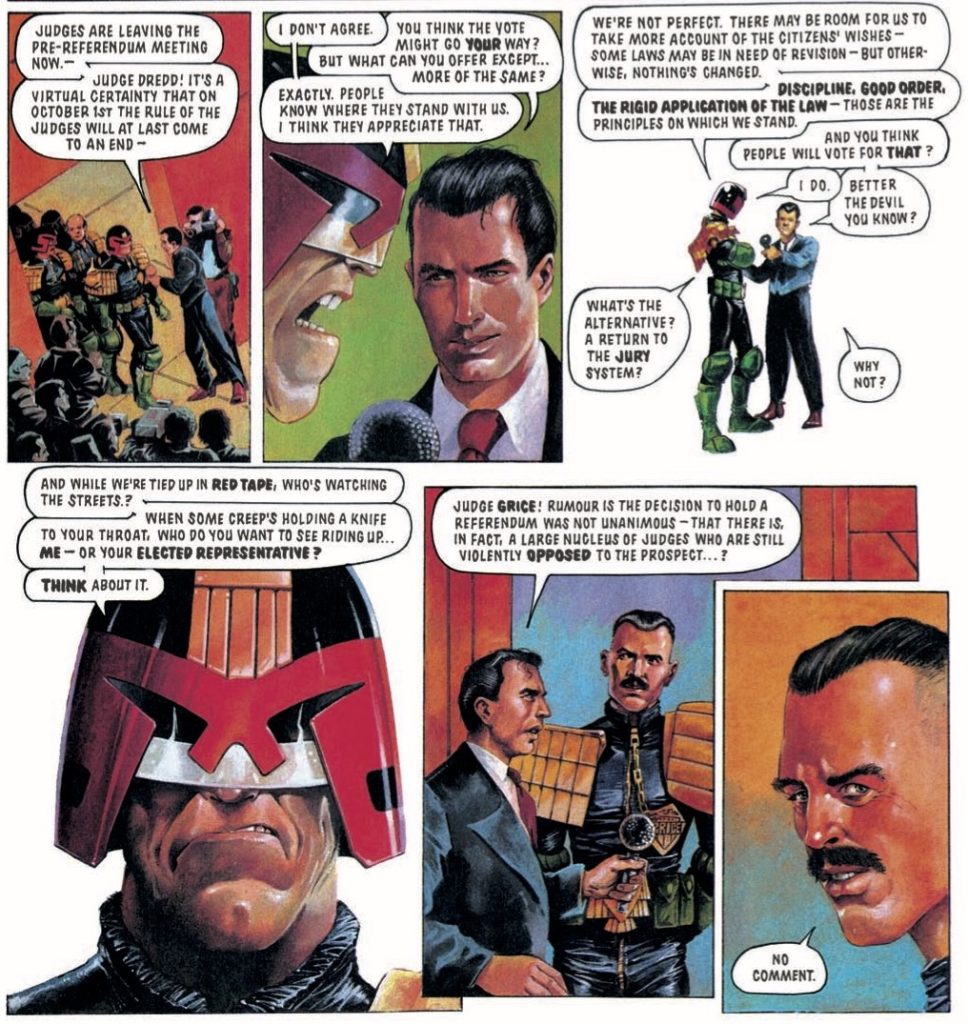 1:29:53-1:46:57: Wagner’s “Devil You Know,” meanwhile, brings out Jeff’s metatextual reading prowess, and we also discuss a couple of ways in which the two stories make an accidental argument for the Judges being a corrupt system that fails to do what it was created to do, and instead focuses on itself. And, yes, we also talk about the way in which that feels a particular way in this particular moment in history, too. 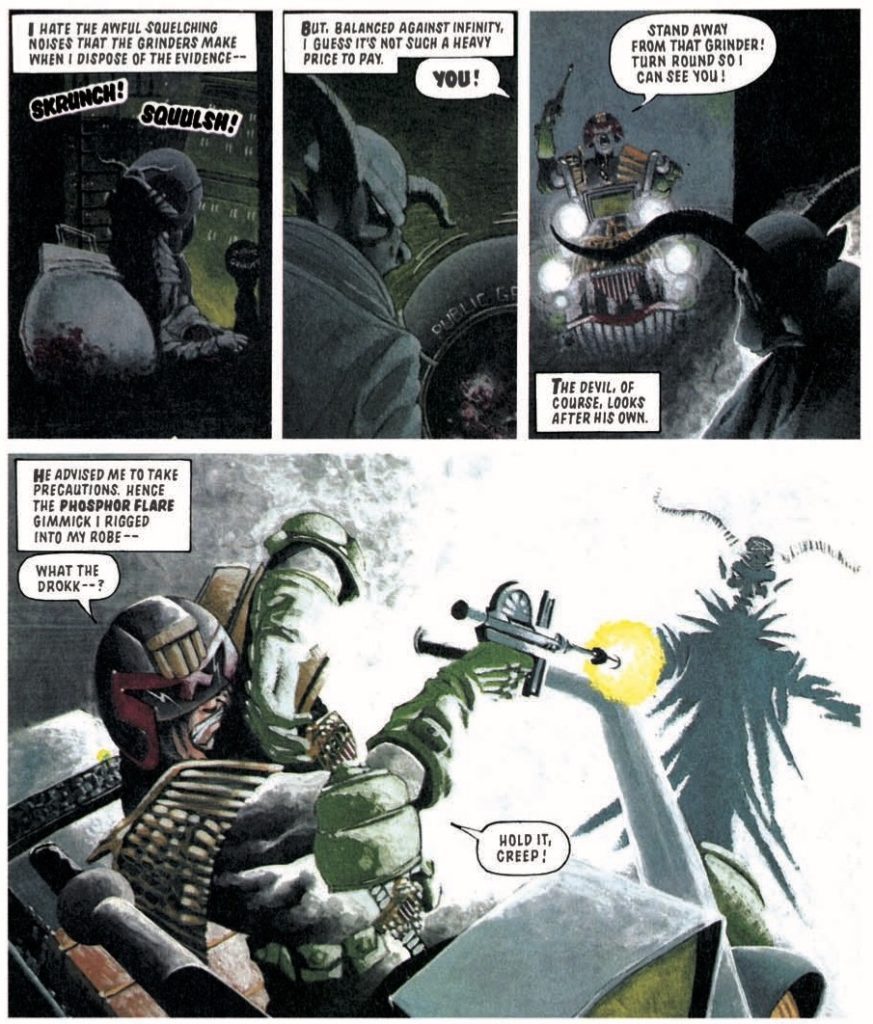 1:46:58-1:53:02: With absolutely no surprise to anyone — despite Jeff’s attempts otherwise — we declare this collection Dross, instead of Drokk, and talk briefly about our choice of favorite non-Wagner stories, both of which are chosen because of the art instead of the writing. (Mine is either “Firepower” or “The Art of Geomancy,” Jeff’s is “Hand of Fate,” if you’re curious.) It’s not a fun time, this book. 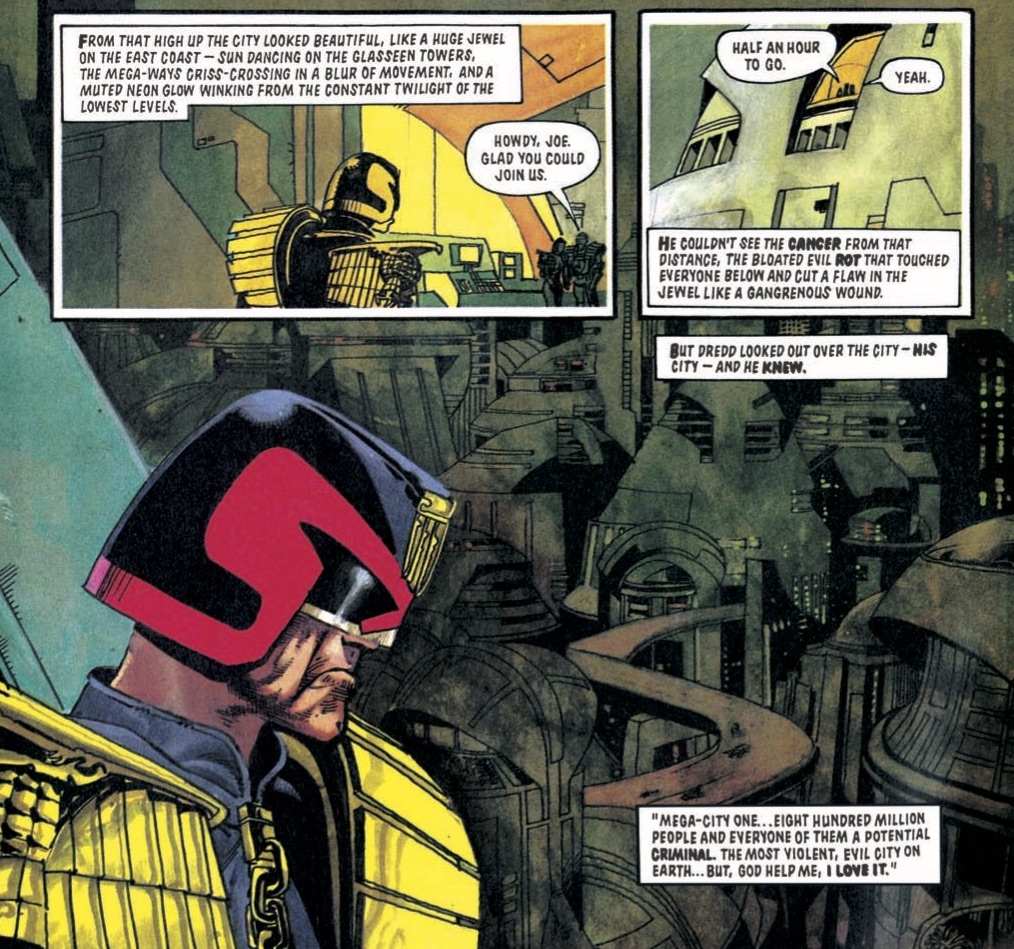 1:53:03-end: In which we look ahead to the next Drokk!, where Garth Ennis writes a crossover between the Megazine and 2000 AD, and wrap things up with the traditional mention of the Tumblr, Twitter, Instagram and Patreon. Grud bless you all for making this painful journey with us, Whatnauts.