Previously on Drokk!: Ignore everything we’ve been talking about in recent episodes — well, not entirely, but for the most part — because we’re stepping outside of the regular Case Files chronology to tackle the Restricted Files once again this time around.

0:00:00-0:02:36: In which we introduce ourselves and the fact that we’re covering Judge Dredd: The Restricted Files Vol. 3, covering stories from annuals and seasonal specials from 1990 through 1993. It is, to say the least, a mixed bag. 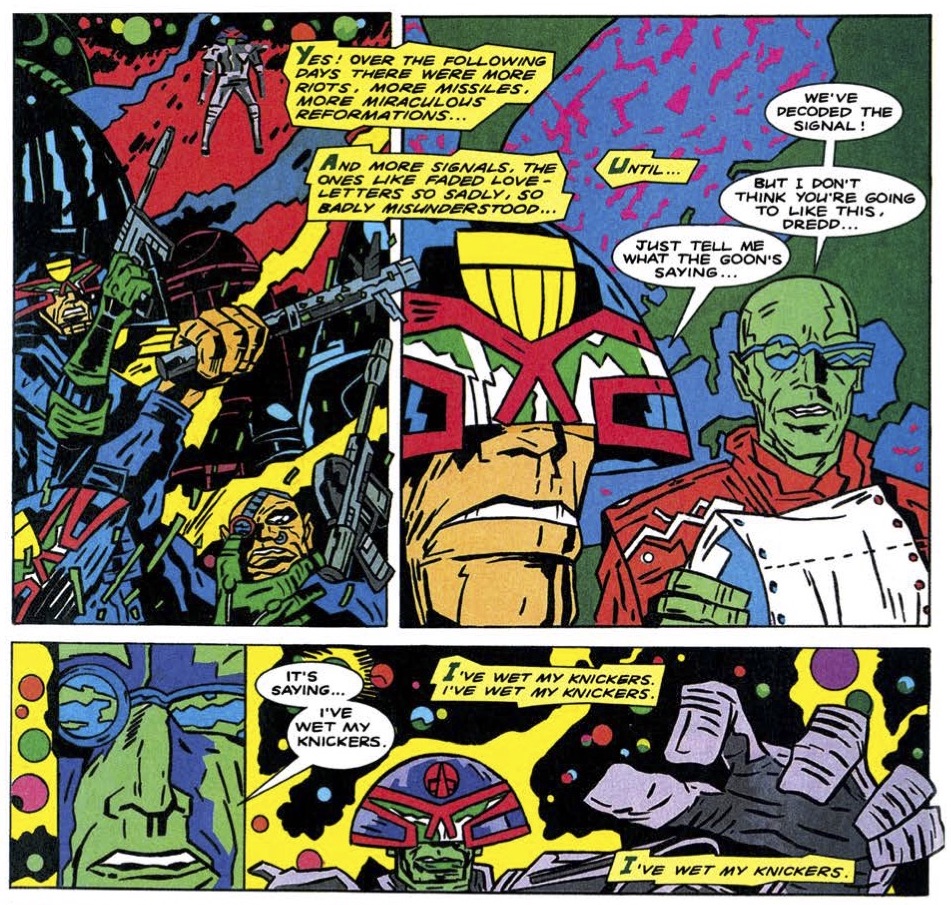 0:02:37-0:14:59: As we start picking through that bag, we talk about the era of Dredd that these stories were published in — an era that saw John Wagner move away from the strip, at least in 2000 AD, and be replaced first by Garth Ennis, and then by Mark Millar and others — and start discussing some of the more unusual contributions in the volume, in particular Peter Milligan and Shaky Kane’s “Judge Planet,” which Jeff points out has a connection with Milligan’s later Enigma, and “The Juve Mutated Kung Fu Kleggs, which features Dermot Power artwork that either is the best thing about the story or the worst, depending on how attached you are to the central conceit. We also touch on the fact that, despite the wildly varying quality on the writing side, this collection has some genuinely great art throughout, with Cam Kennedy, Colin MacNeil, Edmund Kitsune, and Paul Grist all showing up and showing out. 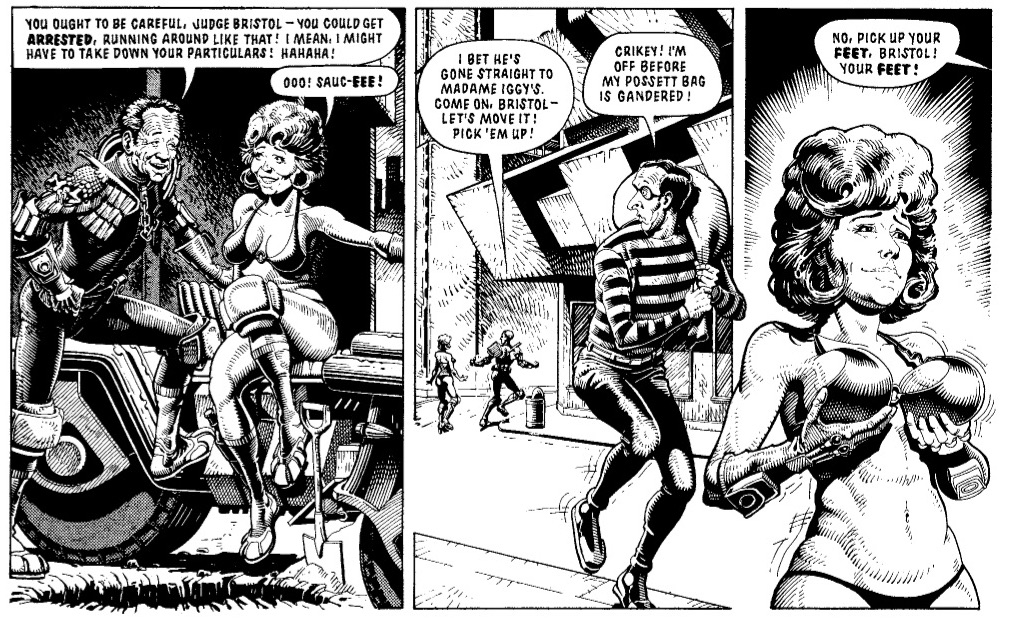 0:15:00-0:47:54: Unexpectedly, we spend a lot of time talking about Alan Grant’s writing contributions to this collection, and the many ways in which they disappoint, especially when it comes to the one-two punch that opens the book, both of which are based on sexist media from more than a decade prior to when these comics were initially published. (Related to this, we briefly touch on the Carry On movies, but don’t provide adequate explanation; read this for some more context.) Also discussed is whether or not David Roach is too classy an artist to pull off a Russ Meyer tribute (he is), the surprising number of debts this volume owes to Silver Age DC when it comes to concepts being used, and a brief overview of Alan Grant’s career inside the Dreddverse and the ways in which he betrays his own best interests that, I suspect, we may end up coming back to in future episodes. 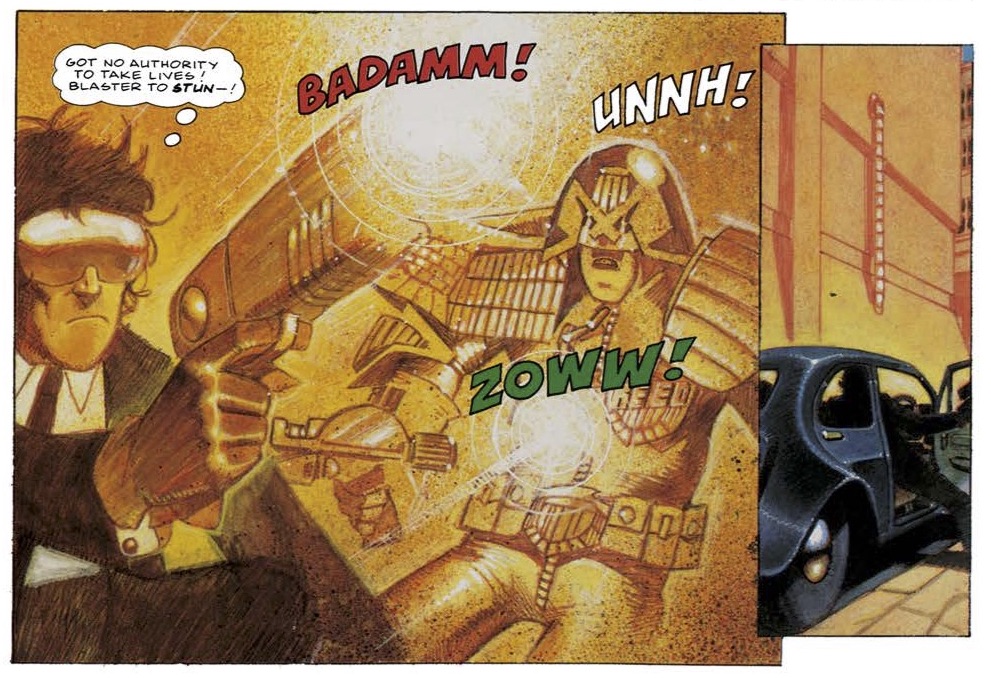 0:47:55-1:12:25: If Grant is disappointing in Restricted Files 3, his former writing partner John Wagner certainly isn’t; his stories in this volume are, for the most part, incredibly strong, with things like “Top Dogs” — the first crossover between Dredd and Strontium Dog, preceding the Garth Ennis-written “Judgement Day” by a year or so — and “Auld Acquaintance,” which sees Jeff ask if it’s okay for him to find the Scottish stereotypes quite as funny as he does. (It is, speaking as a Scot.) Wagner is as strong as we’ve seen him in awhile here, and it’s a return to form that both of us appreciate, especially when it brings with it not only understated character moments like the return of Walter the Wobot as a changed droid, but also the revival of that most understated of Dredd tropes, the out-of-control truck. It’s good stuff. 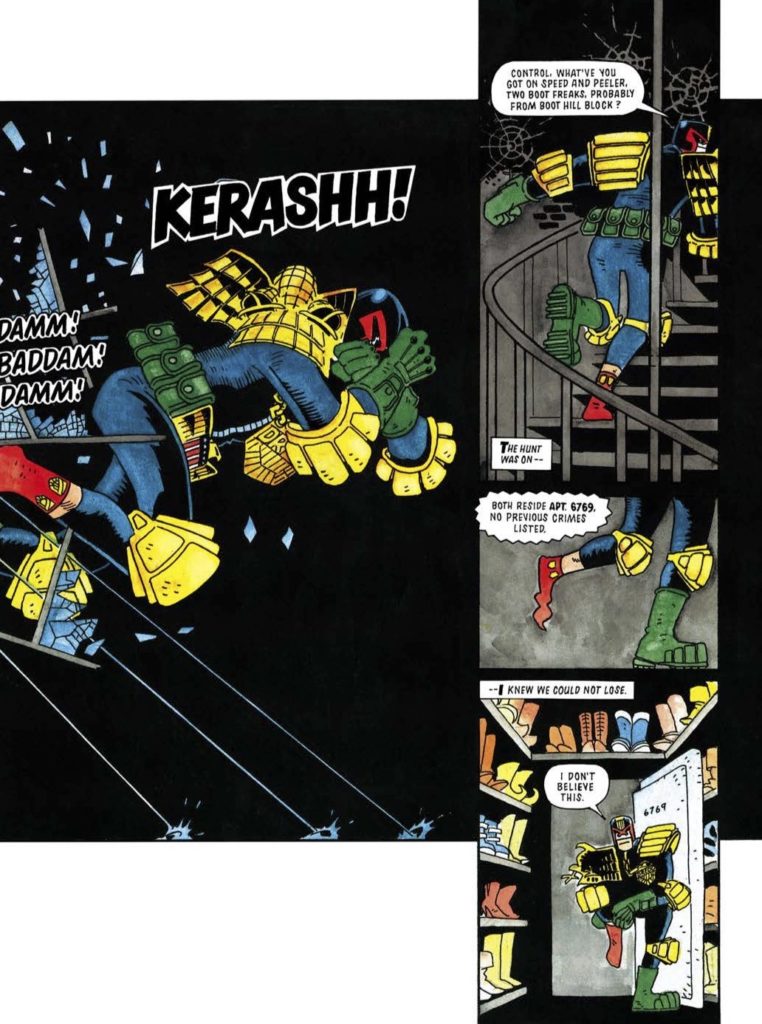 1:12:26-1:19:37: It’s not just Wagner and Grant in this book, honest; to prove it, we talk about two of the better offerings from other writers: “Hate, Inc.” from John Smith, and “Kinky Boots,” from Robbie Morrison — although, with the latter, we really spend most of the time talking about just how great Paul Grist’s artwork for the story is. 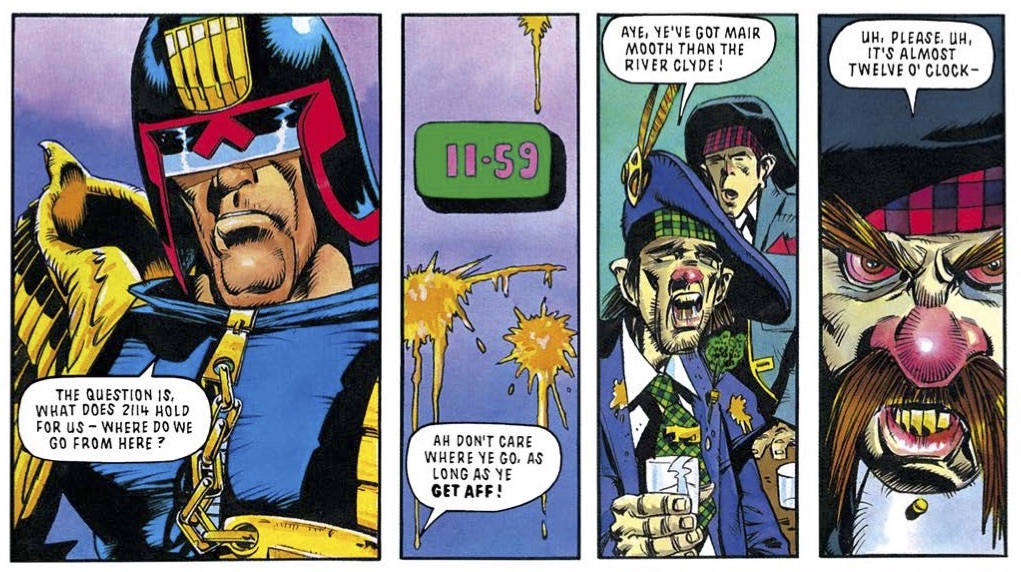 1:19:38-1:27:43: Jeff asks a surprisingly tricky question: What are the best and worst stories in this collection from Alan Grant, John Wagner and non-Wagner/Grant writers, respectively? I go for “Auld Acquaintance” as best Wagner, “Virtual Unreality” as worst Wagner, “Computer Warrior” as best Grant, “Parallel Line” for worst Grant, “Hate, Inc.” for best other, and “Roboblock” for worst other — and that last one is mostly because I didn’t need to see a shirtless Dredd sweating as the big climactic badass image. Jeff, meanwhile, picks “Top Dogs” for best Wagner, “Carry on Judging” for best Grant, agrees with me for worst Wagner and Grant, and drops either “Kinky Boots” or “Judge Planet” for best other, and “Christmas is Cancelled” for worst other, purely because he really, really doesn’t like Brett Ewins, I guess. (But he does like Mark Millar Christmas Dredds, it seems; or, at least, like to hate them.) 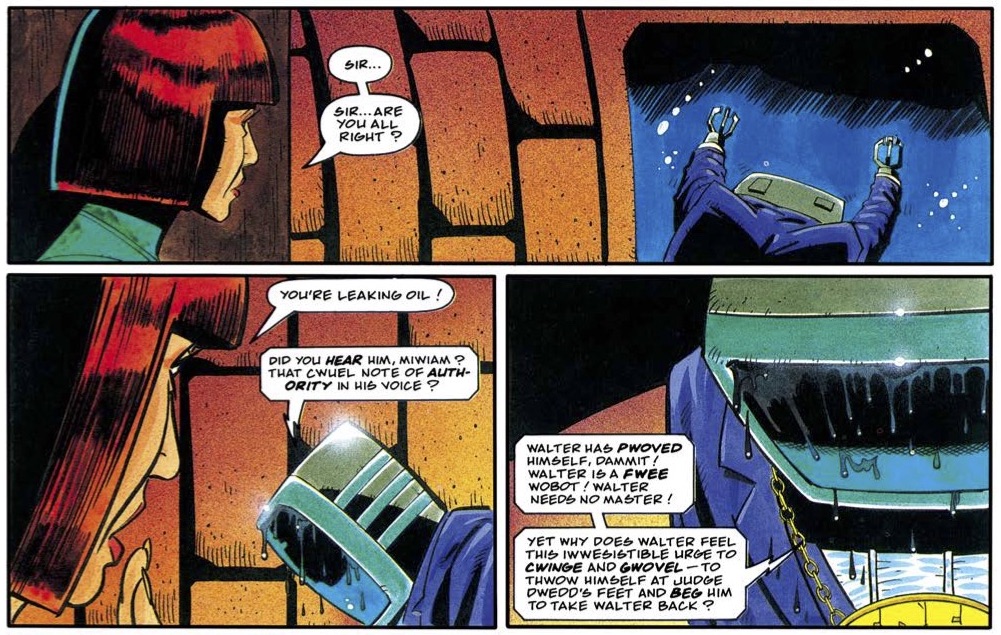 1:27:44-end: So, Drokk or Dross? It’s far too close to call for me, purely because it is such an uneven book, but Jeff is far more upbeat about the whole thing, declaring it a win. With that, we look ahead to next month, and Case Files 20, before going into our regular wrap-up mentions of Twitter, Tumblr, Instagram and Patreon. As always, thanks for reading and listening, and if Alan Grant was checking this out… sorry…?