Previously on Drokk!: Something is afoot in Mega-City One, and it’s not just John Wagner’s attempt to get something resembling an ongoing continuity going in the strip for, really, the first time in its existence. Cyborg mob boss Nero Narcos has secretly supplied the Justice Department with new weaponry, as part of his plan for… something, while at the same time, Judge Galen DeMarco has left the Justice Department as, essentially, collateral damage in the Cold War between Judges Dredd and Edgar. Wouldn’t it be a thing if one storyline tried to tie those two threads together, while also bringing in an entirely unexpected classic storyline from the early days of the strip? Wouldn’t it?

0:00:00-0:03:53: And so we return and begin again, with Jeff and I introducing ourselves and also the volume we’re talking about this time: Judge Dredd: The Complete Case Files Vol. 30. Written by John Wagner, the whole volume is, in theory, telling one singular — if complicated — story, with art from a whole host of talents, including Cam Kennedy, Mick McMahon, and Charlie Adlard. I also take this opportunity to call out a mistake in the credits of Vol. 30, which is honestly kind of impressive when you think about just how many credits have run in the preceding 29 volumes without mistake.

0:03:54-0:26:29: We immediately launch into a discussion about why the book disappoints, because it’s us. It’s not just that it’s uneven, but that the start of the volume is so strong that when Wagner starts losing interest, it’s very obvious. Jeff has theories about the ways in which the arc fails to live up to traditional Dredd mega-epic plotting, and also feels as if this arc is “The Apocalypse War” all over again (but worse); I’m unconvinced, pointing out that at least some of the traditional mega-epic structure shows up here. More of a problem for me is the fact that, as a crossover between the Megazine and 2000 AD, the way the story is collected in this volume hurts the material, which wasn’t that strong to begin with. Also! What is going on with the Judge Edgar non-plot thread in this story? And how great is Wagner when he goes minimal as he does on the first story in this collection? 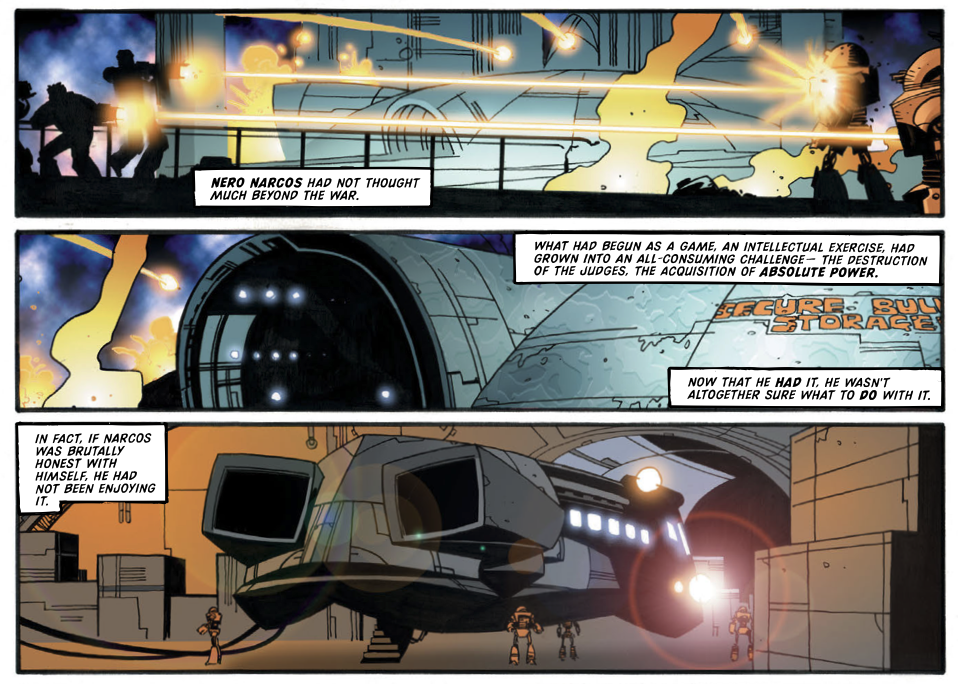 0:26:30-0:38:13: Our dissatisfaction tour continues, as we talk about the utter failure of Nero Narcos as the villain of the piece — something that even Wagner seems to have realized and accepted inside the text of this story itself, somewhat amazingly. He had the potential to be a mirror image of Dredd himself, but utterly failed on that front. (Except, and we didn’t discuss this on the podcast, what if his failing to live up to his potential and having no ability to stay on mission part of his opposite of Dredd-ness? Did I just blow your mind?!?) But did Wagner undercut things by making sure that the fall of Mega-City One happened off-panel — and could that have anything to do with what Jeff describes as Wagner having grown past the war comic genre? 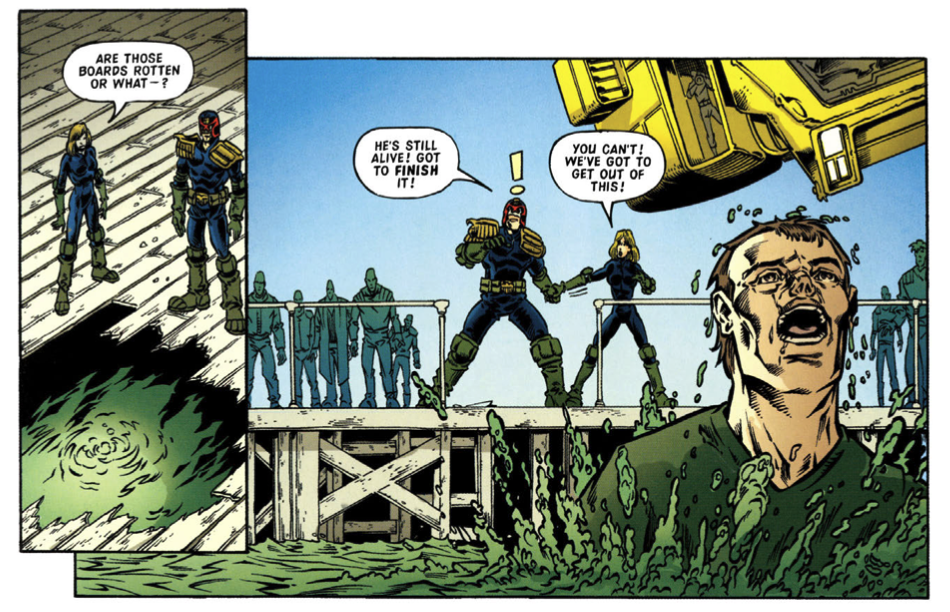 0:38:14-1:06:17: We return to how uneven the book is, and why the opening works on levels that the rest just can’t live up to. Is it Cam Kennedy’s art? (And Simon Davis’ art, too.) Or is there something about the tone of the writing that is abandoned to a cartoonish ness for the rest of the book, including the conclusion of the very trial story that Kennedy and Davis’ arcs are part of? Also, does the cheapness of Orlok’s escape speak to a structural problem with the strip having a recurring villain based around the idea of his being as tough as Dredd? Does the trial attempt to redeem Dredd’s actions in “The Apocalypse War” and speak to Wagner attempting to retcon Dredd into being less morally ambiguous, and more “Judge Dad”? Am I out of bounds by using future Dredd stories as guidelines for how I read this material? Did I completely and accidentally miss Jeff’s cue that he wanted to talk about DeMarco and instead talk about other stuff? Well, the answer to that last one is easy to answer: yes. (Oops.) 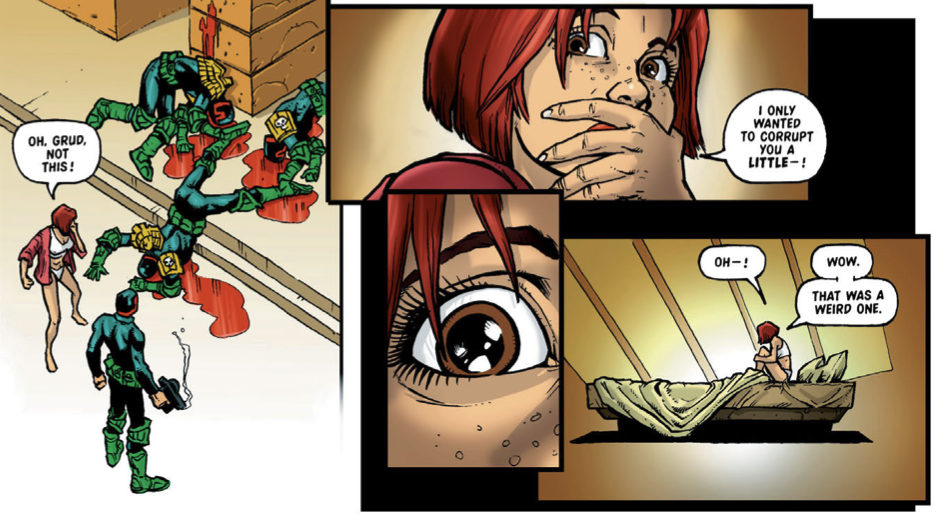 1:06:18-1:25:19: Finally, we get to the DeMarco conversation that Jeff wanted to have earlier, and it goes to unexpected places. That both of us feel that the DeMarco side of the story is a letdown, I’m pretty sure everyone saw coming, especially with Andrew Currie’s artwork failing to serve the story in any appreciable way. It’s similarly not too surprising that we were both disappointed by DeMarco running into two judges she’s previously worked with, or how broadly Rothman’s portrayal is in his brief appearances — for real, he would have been reprimanded for that kind of nonsense, surely…? — but who expected Jeff and I to get into a discussion over whether or not private eyes should exist in Mega-City One, or whether it’s a waste of the potential that DeMarco represents? 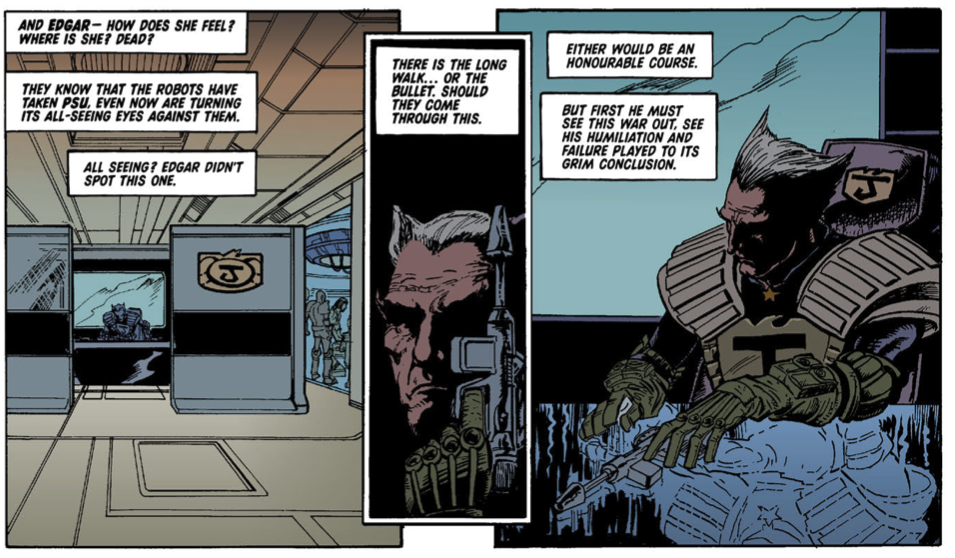 1:25:20-1:32:41: The unfortunate fate of Chief Judge Volt is briefly touched upon, with neither of us feeling as if it was particularly earned, nor necessary. Jeff talks about whether or not it’s part of an especially subtextual arc about Volt being a Dredd supporter, whereas I’m more concerned about the seeming overstatement about the importance of whether or not the Psi Division is responsible for the disaster, which comes up more than once in the story. I mean, they did see it coming…

1:32:42-1:42:03: Before we try to close up shop, we talk a little bit about the art in the volume, which includes some genuinely incredible highs — Kennedy, McMahon, Colin Wilson doing some great work — and some utterly destructive swapping out of artists on the “War Games” sequence in particular, which has no less than six artists in seven chapters, and not exactly artists with similar styles. 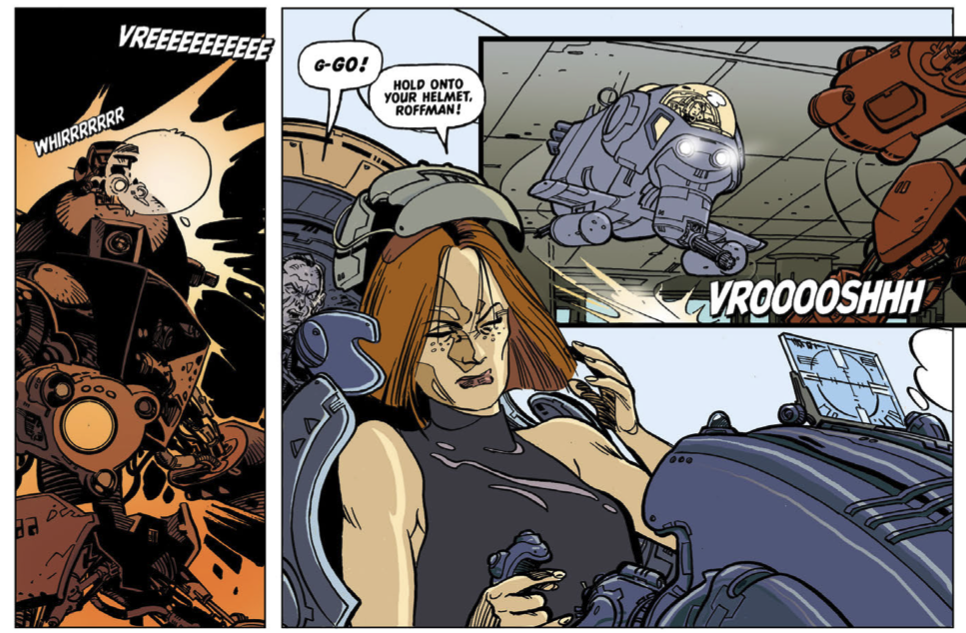 1:42:04-1:54:19: Drokk or Dross? We both go for Drokk ultimately, despite reservations, which comes as a surprise to me considering some of Jeff’s misgivings. We also talk about the anti-climactic climax to the entire storyline, and the fact that — because of the format of the crossover, and the way it’s collected here — you get to read it twice, just to ensure as much disappointment as possible. 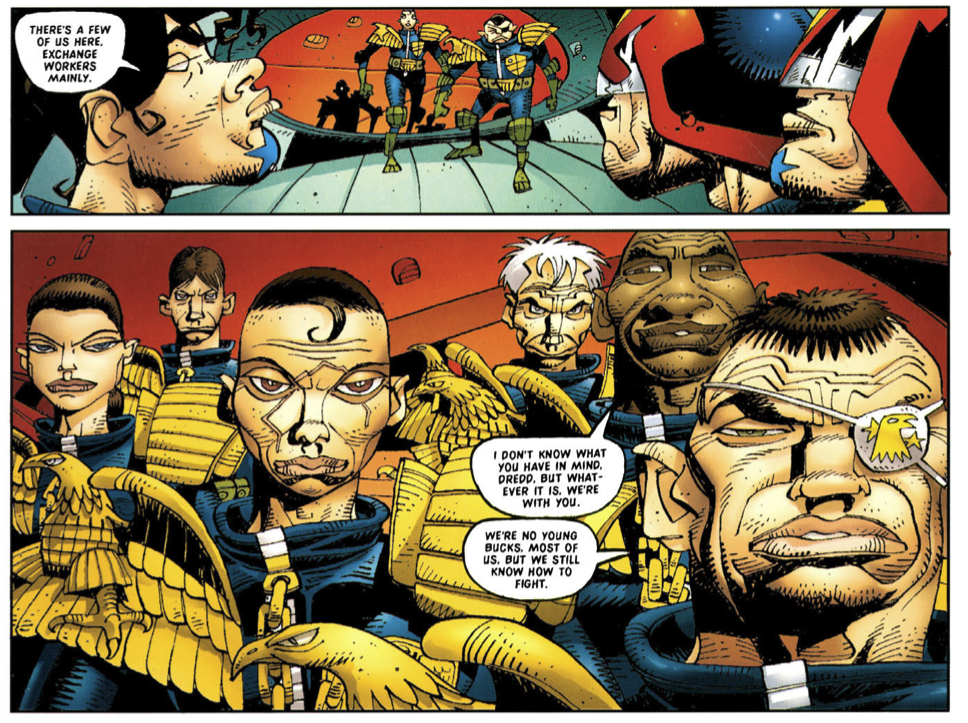 1:54:20-end: As we try and wrap things up, I throw a wrench in the works and suggest that next episode ignores Dredd entirely to, instead, read some Strontium Dog — another 2000AD series created by John Wagner and Carlos Ezquerra, and written for the majority of its run by the team of Wagner and Alan Grant — only for Jeff to agree, so: next time, we’ll be reading Strontium Dog: Search/Destroy Agency Files Vol. 2, and it’ll be a lot of fun. Also, we mention Patreon and Twitter, as usual, but that’s not as important as, next month! Strontium Dog! As always, thanks for listening.