Previously on Drokk!: Last time out, we took a break from the regular grind to read some Strontium Dog, under the basis that it’s created by Dredd’s John Wagner, Alan Grant, and Carlos Ezquerra, as well as simply wanting a nice holiday episode. Now, though, we return to Mega-City One and the antics of one Judge Joseph Dredd, esq. Sure hope it’s going to be a fun, easy volume we’re dealing with this time out! 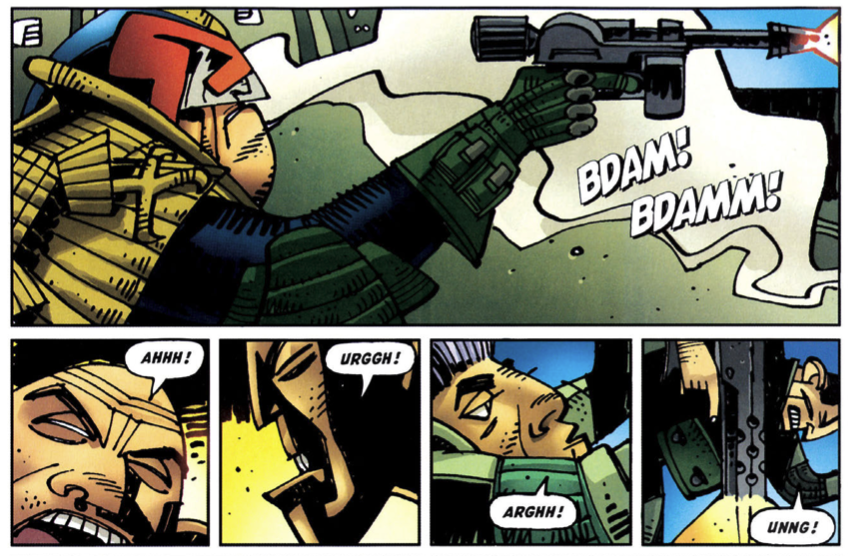 0:00:00-0:03:39: As is only customary, we introduce ourselves and the volume we’re reading this time out: Judge Dredd: The Complete Case Files Vol. 31, which collects material from 1999 and 2000, something we really didn’t make enough out of in the episode itself. They finally got to the year the comic was named for! That was a bigger deal than, honestly, it felt like in this volume — but then, we do talk about the two special strips that resulted from the big issue celebrating the fact, so maybe not. 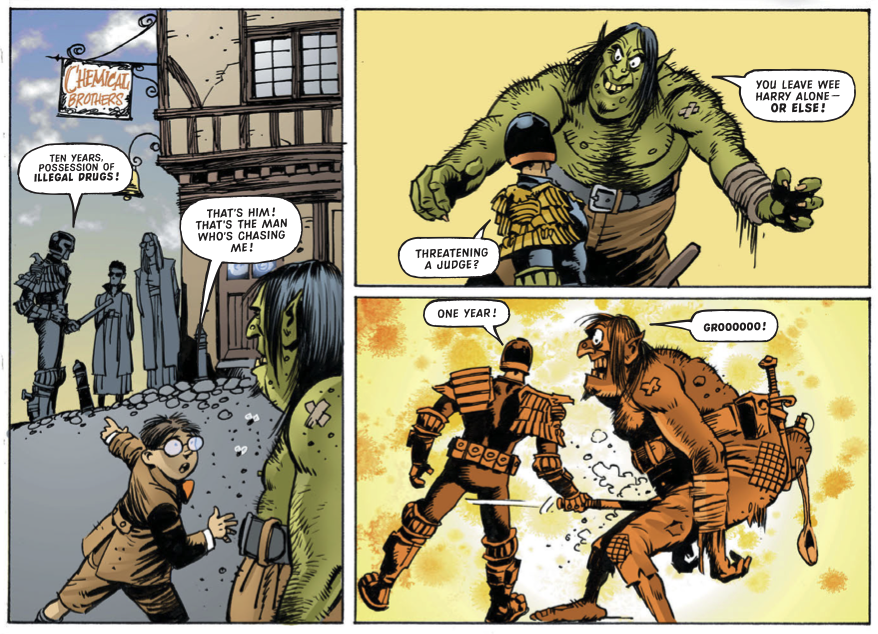 0:03:40-0:11:31: Okay, here’s the thing: this volume is extremely hit-and-miss, with a lot of the latter — in no small part due to the heavy presence of Alan Grant as writer; he’s responsible for two-thirds of the 2000 AD material in here, and it’s for the most part sloppy and obvious in a way that John Wagner’s work just isn’t. We talk about that, and the ways in which Grant disappoints far more than his former collaborator. 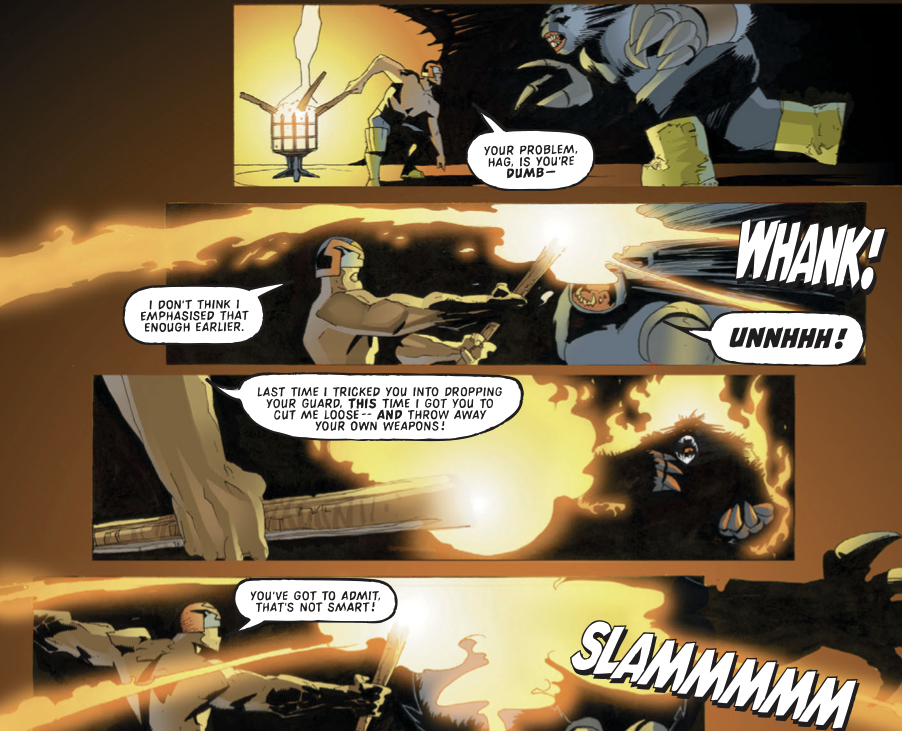 0:11:32-0:29:12: Our joined Grant rant is interrupted by what might be my primary opposition to this volume: the failure on multiple fronts of the visuals on this book, as personified by Siku, whose work is particularly disappointing and destructive towards the final product. I also complain about the coloring work of Chris Blythe in this volume, though, comparing it to Malibu Comics’ early computer coloring, which in retrospect might be a little unfair. (I still think that the colors aren’t serving the art well, mind you.) If it helps, we also talk about how good Steve Parkhouse and Mick McMahon are, though, and Jeff appreciates the ways in which John Wagner dips in to move the larger continuity of Dredd along in between the shorter strips.

0:29:13-0:51:43: While we’re appreciating artists, we talk about the greatness that is Henry Flint, especially his work on the genuinely incredible “J.D. Megson: A Near-Death Experience,” which appears in this volume. I reveal the subtext/meta-text of the story to Jeff, and suggest that the fact that he enjoyed it without even knowing that subtext existed demonstrates that this is proof of meta-text done well. We also discuss another of the volume’s highlights, “I, Jovis” — a story that swerves away from expectations in two major ways, and is all the better for it. Also under discussion: Is there such a thing as “authentic cynicism,” or am I just talking out of my ass? (Answers on a postcard, please.) What’s the difference between “Good Dredd” and “Bad Dredd,” and do these two stories demonstrate it? And, does Dredd’s openness to the potential for religious faith in “I, Jovis” trigger Jeff’s dislike of what he’s started to call “Judge Dad” moments? 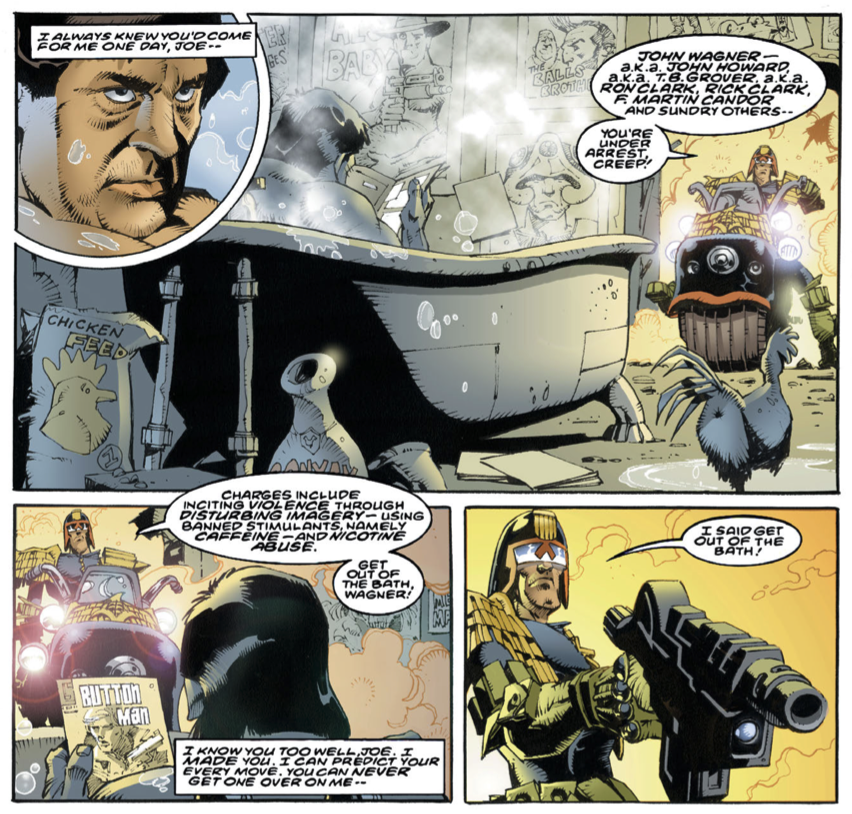 0:51:44-1:12:07: We continue singing the praises of John Wagner in a roundabout way, as we first discuss the two anniversary issue stories — “Future Crimes” and “Old Pal’s Act,” one of which is written by Wagner and one is about Wagner — as well as “Voltface,” and the way it advances the mythology of Mega-City One and the Justice Department. Hershey is now Chief Judge, but what does that mean, especially considering Wagner clearly favors Hershey as something close to Dredd’s level of honor and decency? What does it mean to be the acceptable face of something unacceptable, and is this Wagner merely planting seeds for future development, or his attempt to put the readers’ suspicion of the Judges to bed for a while? But, really, though: that flying bathtub in “Old Pal’s Act” is just amazing. We should have talked about that some more.

1:12:08-1:28:47: Jeff leads us briefly through the remaining Magazine stories that we hadn’t already discussed, including my refusal to give any more mental space to “Stan Lee,” the martial arts hero nonsense by Alan Grant (and, in this volume, artist Ben Willsher), before we get to “Dead Ringer,” a short-run story that manages to basically act as a tribute to and perhaps parody of “The Judge Child Quest” in miniature, written by John Wagner, who wrote the original story it’s obliquely referencing. What was going on there, and just why are some of the art choices in the story quite so bad? 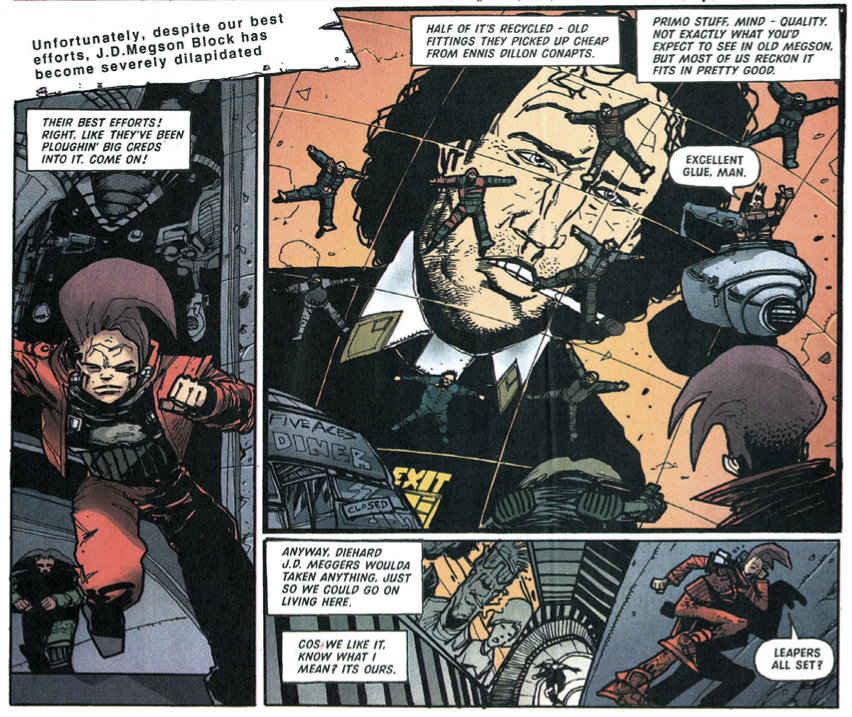 1:28:48-1:34:20: Is this volume Drokk or Dross? In a surprise decision, we both plump for Dross, because the stink of Alan Grant’s contributions couldn’t be ignored. I’d mentioned my favorite stories in this volume earlier (They’re “Volt Face,” “Future Crimes,” “Old Pal’s Act,” and “J.D. Megson,” with the latter probably being my favorite), but Jeff ultimately plumps for the equally deserving “I, Jovis,” based on the art of Steve Parkhouse as much as anything else.

1:34:21-end: We speed towards the close of the episode by talking briefly about what’s to come — less Alan Grant! More John Smith! — and then the traditional mention of Twitter and Patreon before wrapping things up with one of Jeff’s best Dredd voices yet and my badmouthing an upcoming comics project. As always, thank you for listening and reading; we’ll be back next month with, I hope, a better volume.