00:00-13:04: Greetings!  After a rocky opening on Jeff’s part (and not by which we mean he goes the distance for the Champion of the World title), we are on to talking about the big cinematic news of the week, coyly alluded to our references to one another as “Pattinson” and “Wright.” Yes, of course, as you would expect of a comic book podcast during the week of a new Batman movie premiere, we are going to spend *a lot* of time talking….West Side Story! But only after Graeme tries to figure out when the last Batman movie was released and who was writing Superman at that time…(Have you ever considered we’re not really doing this whole comic book podcasting thing correctly? I hadn’t…but typing the sentence certainly gave me pause, I admit.) But anyway, there is a bit of The Batman talk (or, to use the comedy staple, what I’d call “The ‘The Batman‘ talk,” which now that I think of it maybe it’s just funnier to say “The Batman talk” as it sounds like that kind of euphemism for the talk you have when you tell kids where babies come from? (“Well, son, when a man and a woman love each other very much, they get gunned down after leaving a movie theater, leaving their only son behind, vowing to fight crime….”) and it’s spoiler-free. (Also, kind of blatantly uninformed, but eh, what can you do?)

Extremely hard to execute. Pure, masterly clockwork precision and a lot more complex than “seamed” shots or steadicam-to-crane “relay” shots. Baffling, virtuoso- but one of so, so many shots that make the camera “dance” with each musical number. https://t.co/rjzdit0Mak

13:04-25:44: Okay, but seriously…the remake of West Side Story! Graeme has seen it; Jeff will soon but has not yet; and we talk *a lot* about it as well as some Stephen Spielberg related stuff as one would expect. Also discussed: crying at movies, catharsis, and more.[ 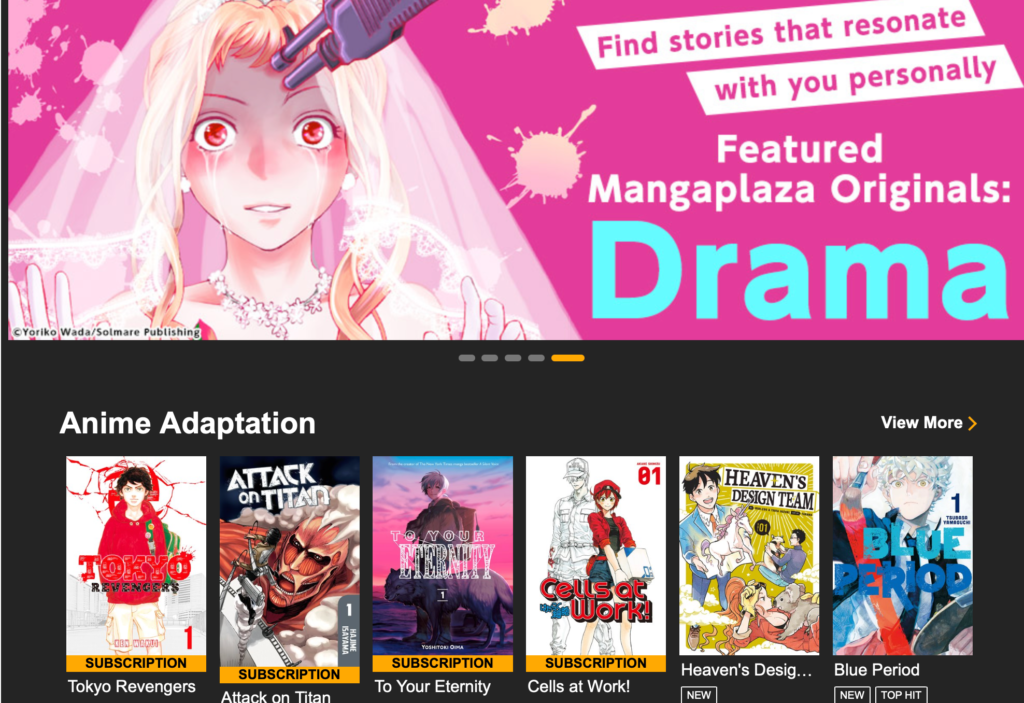 25:44-48:05: So here’s some comic book talk: Graeme was pretty surprised when Jeff mentioned being pretty depressed about digital comics this week in part due to…manga?! What? Find out the scoop here, True Believer! Discussed: Amazon and its lousy search and sort for comics on sale, Temple Grandin’s cattle, Conan (of course), MangaPlaza, Crunchyroll and Funimation, moving cookies around on a plate, Shonen Jump and MangaPlus, Azuki, Manga Planet, and more. 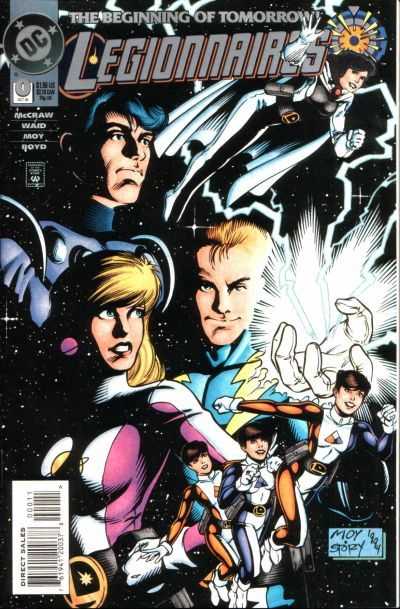 48:05-1:21:40: By contrast—and certainly not without its own frustrations (certainly for those outside the U.S. who have no access to it)—Graeme has had a fine ol’ time with DC Universe Infinite. It has personalized reading lists! And decades of Legion of Super-Heroes comics! So you can just imagine what Graeme has done with just those two things! (And if he figures out a way to export or get a link for the former, I’ll include it here!). So, yeah, buckle up and get ready for Graeme to walk you through LOSH and Legionaries in the 90s, but only after he walks Jeff through the storied history of its reboots, offshoots, and, uh……cahoots, or something? (Sorry, riffed my way into a corner on that one…) 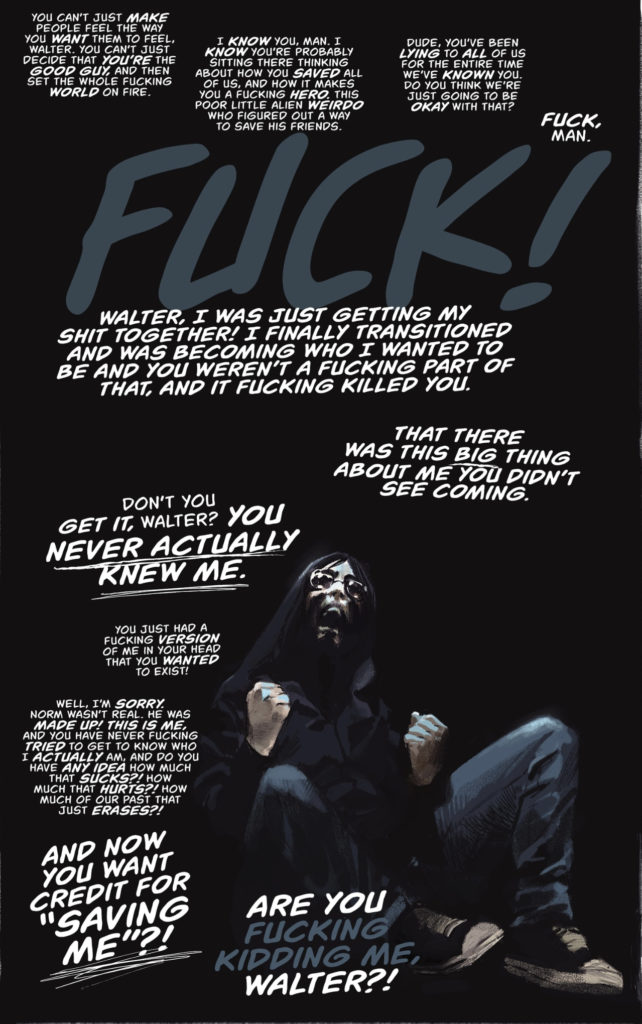 1:21:40-1:41:48: Jeff wants to talk about the latest issue of The Nice House on the Lake by James Tynion IV and Álvaro Martínez Bueno (with exquisite coloring by Jordie Bellaire!) So if you haven’t read the first volume (issues #1-6) or the latest issue, there are SPOILERS here for both. A bit of back and forth with Graeme and Jeff as to where Jeff thinks things might be heading. BTW, at one point, Jeff gets frustrated at waving his hands in frustration trying to sum up “The Disney situation,” and this is what he was going on about. 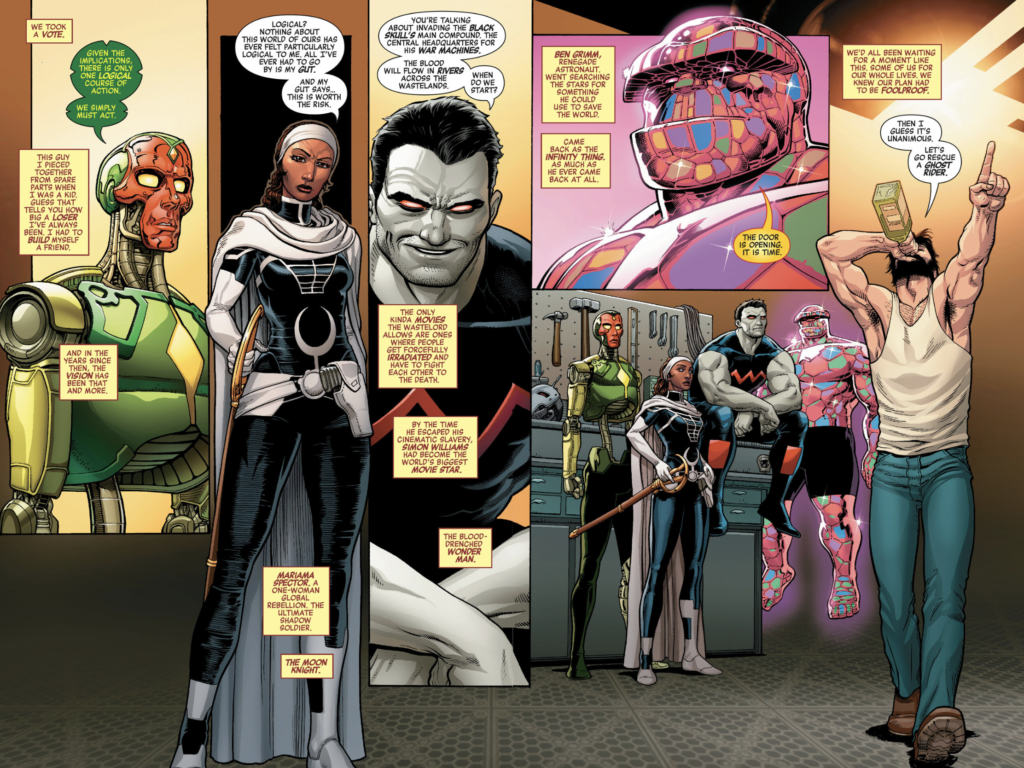 1:41:48-1:51:40: According to Graeme, Jeff wasn’t so down with earlier issues of Nice House…. (which is not how Jeff remembers it) but true or not that’s a great segue for Jeff talking about Jason Aaron and Avengers Forever: Jeff *hated* issue #2, but enjoyed issue #3 that just came out. Graeme is, understandably, suspicious (especially after reading the recent run of King Conan to report on the recent controversy) and we talk about Jason Aaron and what his deal is, exactly? 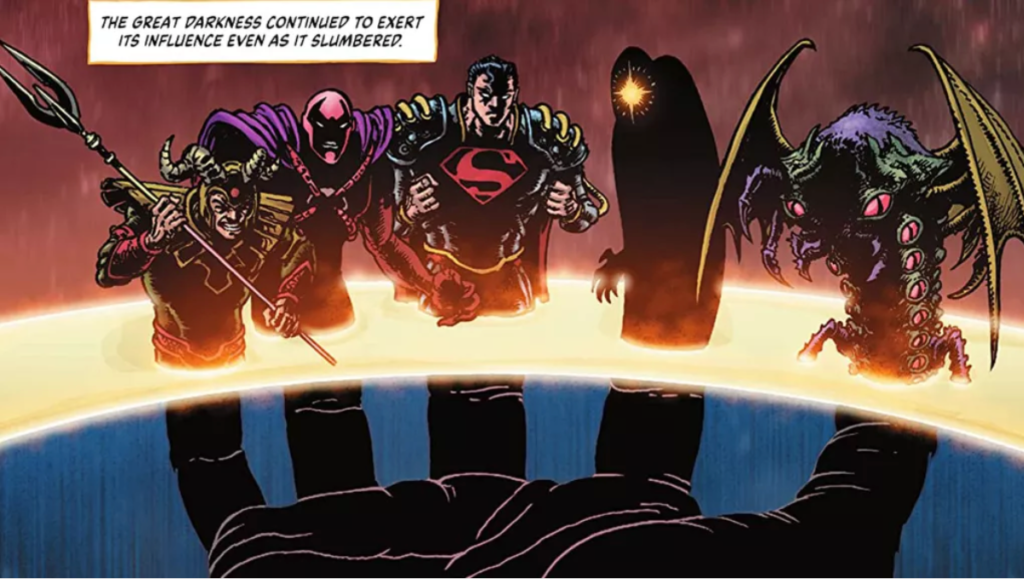 1:51:40-2:00:27: Jeff running from strands from Aaron’s work to Scott Snyder’s work sparks Graeme into pulling attention over to Justice League Incarnate, Deathstroke, Inc., and the material Josh Williamson (with Dennis Culver) has been drawing connections between while shaping their big storyline. Multiversity? Saga of Swamp Thing #50? The Great Darkness Saga? Eclipso?! Sign me up!
2:00:27-2:06:59: And finally, *very* quickly (at least by Jeff standards), Jeff wants to talk about the kinda amazing shoutout to a Steve Ditko character that David Anthony Kraft and Mike Vosburg drop into issue #12 of The Savage She-Hulk. It’s really kind of a thing!
2:06:59-end:  Closing stuff!  Graeme’s newsletter (https://www.getrevue.co/profile/ComicsFYI!  Stitcher! Itunes! Instagram! Twitter together and separately: Graeme and Jeff! Tumblr, and  on Patreon where a wonderful group of people make this all possible, including Empress Audrey, Queen of the Galaxy, to whom we are especially grateful for her continuing support of this podcast.
NEXT WEEK:  Time to bust some creeps! Read vol. 33 of Judge Dredd: the Complete Case Files, and join us next week for Drokk!!