Previously on Drokk!: Things are all good in the 22nd century, as long as you’re a reader from today just visiting Mega-City One for the Thrill Power. After nuclear apocalypse and orangutans being elected to political office, I can only imagine what it’s like to live there… 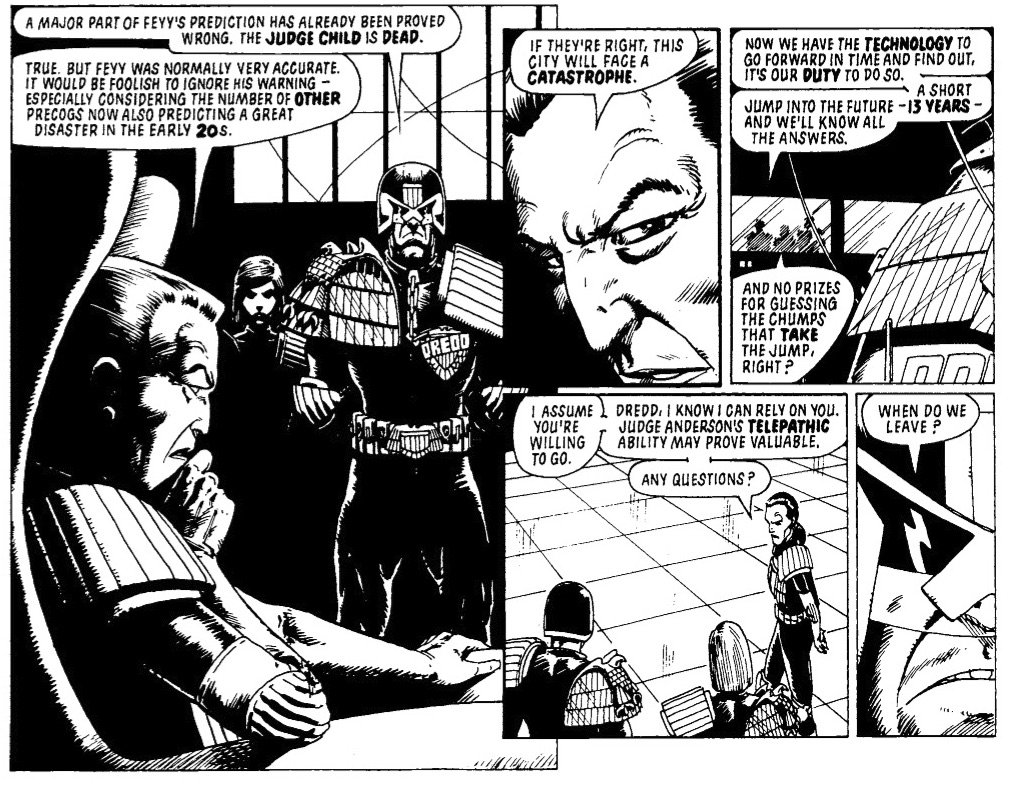 0:00:00-0:02:44: Welcome, dear friends, to a Drokk! unlike any other, at least insofar that Jeff and I were both poorly when we recorded it, but more importantly, neither of us particularly dug Judge Dredd: The Complete Case Files Vol. 8, the massive slab o’comics that we’re covering this time around. It’s all the Dredds from 2000 AD Prog’s 376 through 423, which is a lot of Judge Dredd, but it was also… a bit of a slog, as we quickly get into.

0:02:45-0:07:51: Is this, as I call it, the “flop sweat volume”? Has the previously untouchable writing team of John Wagner and Alan Grant lost its way, or merely taking a breather while relying all-too-much on a medley of the greatest hits from the strip’s past? If it’s the latter, there’s a problem, as we talk about: This isn’t a book that does the greatest hits any favors.

0:07:52-0:18:42: Almost accidentally, we fall into a discussion of the first extended storyline in the book, “Dredd Angel,” which has some good gags, but little else, raising our ire — mine especially — with the missed opportunities to make some kind of larger point about Dredd’s mission in amongst Liberace references and butt jokes. (No, a different kind of butt.) Jeff, at least, is enamored with the idea of Tulsa melting because of an atomic blast, so there’s that. 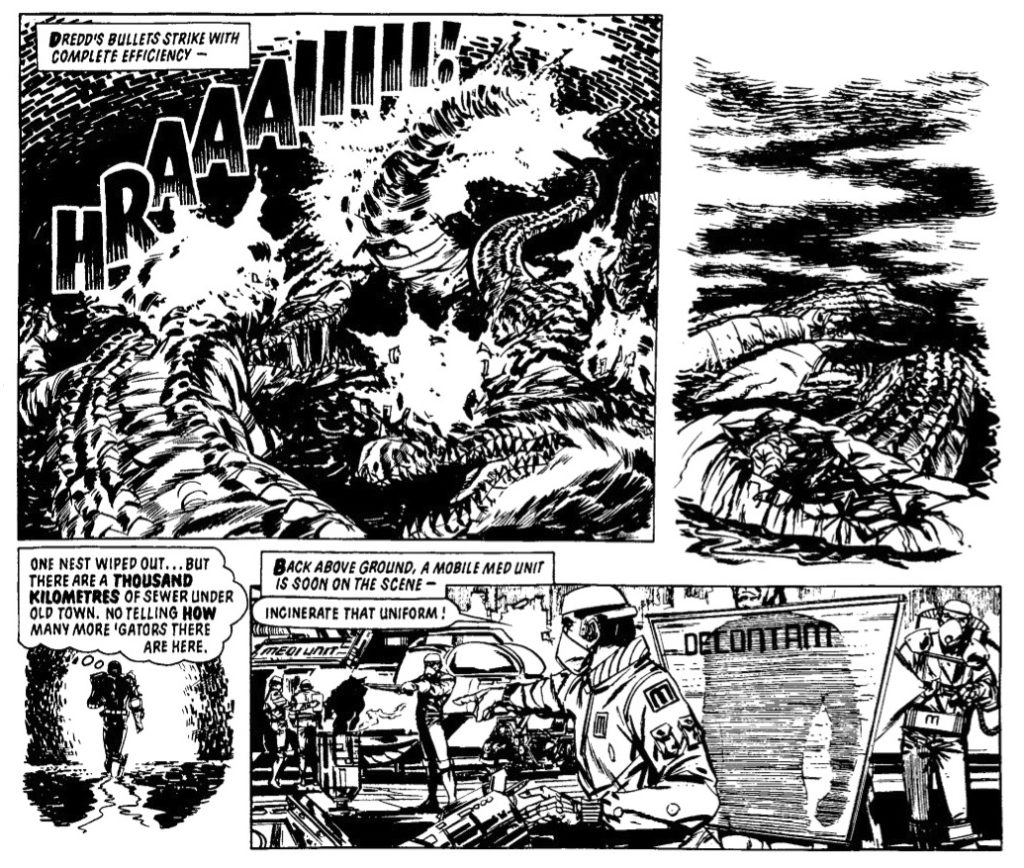 0:18:43-0:23:59: If “Dredd Angel” was disappointing, then “Gator” is genuinely wretched thanks to some very poor art choices and a story that feels like it was put together by Wagner and Grant on a series of off-days. In retrospect, this really was a bad omen for what was to come, but as if to make it worthwhile, Jeff teaches me some albino alligator history. 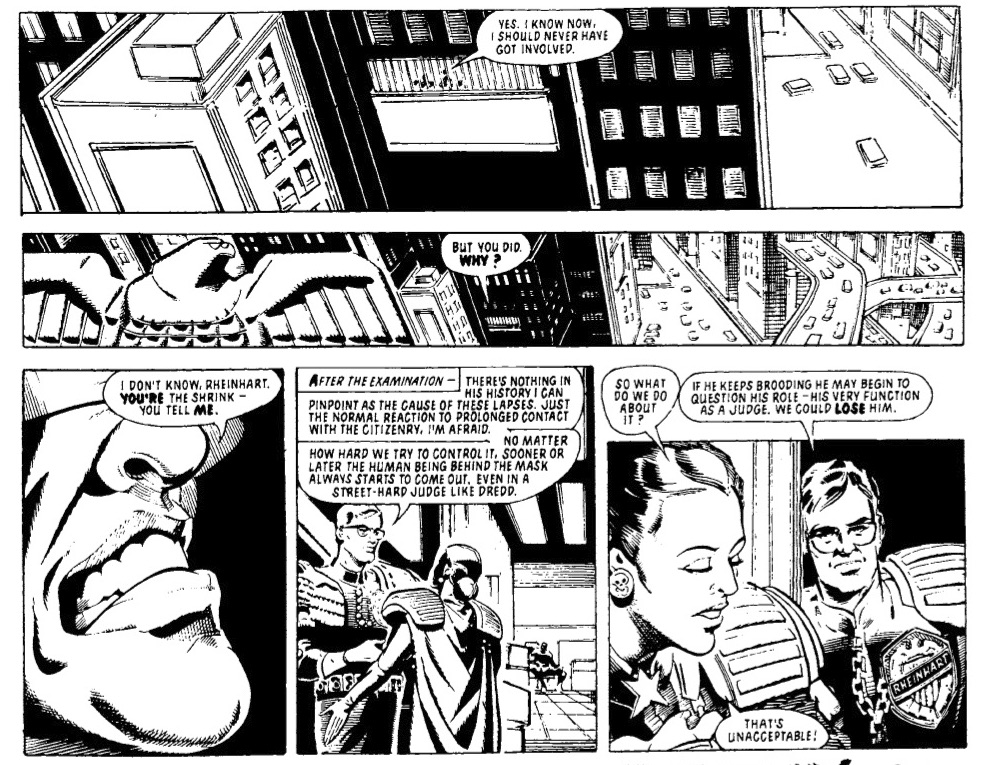 0:24:00-0:44:45: The “Judgment” trilogy — an unofficial way to describe three stories that delve into whether or not Dredd is growing a conscience, and if that’s a good or a bad thing in the world he’s living — is one of the two highlights of this volume, and we unpick how dark the three stories are, the ways in which they subvert audience expectations for this kind of story, and the running gag of Dredd not getting on with accountants. All this plus: Robot children are scary! The creepy institutional stance on emotions when it comes to being a Judge! And: A cliffhanger that stays hung for longer than you’d expect! 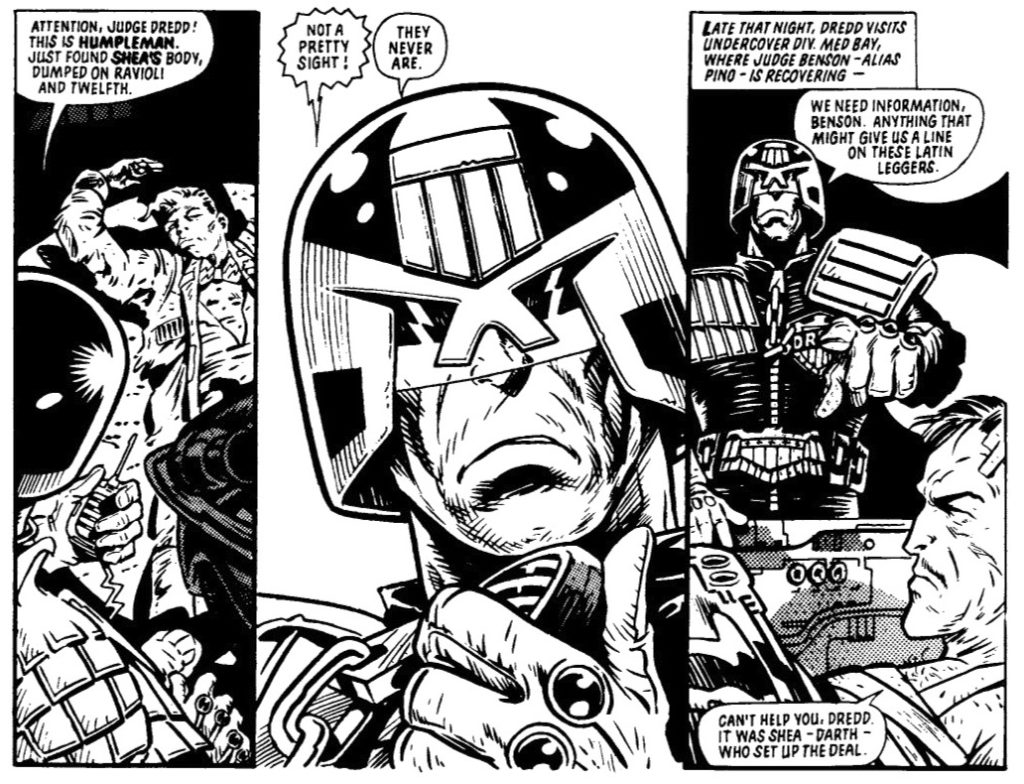 0:44:46-0:47:43: Before we get to “City of the Damned,” it’s time for a brief respite when “The Wally Squad,” which boasts some great art by Brett Ewins and, for one episode, “McCarthy” (Brendan? Jim? It’s unclear, but I suspect the former.) The story is light, but Jeff suspects that’s exactly what everyone needs at this point in the book. (We also touch on Jeff’s feelings on the trope of an undercover cop going bad, which is what this story is about.)

0:47:44-1:21:24: “City of the Damned” is the heart of this book in more ways than one — it’s the longest story in here, but it’s also a deeply flawed story that sums up the disappointment of the collection in one fell swoop, with Wagner and Grant seeming disinterested in their own work and featuring some lackluster artwork from Ron Smith. That doesn’t mean that Jeff and I don’t have a bunch to talk about, especially because it brings about a return of Jeff’s obsession with the Shadow Self, which prompts a discussion about whether or not the writers were fully aware, never mind engaged, in the subtext of what they were writing, as well as whether or not Dredd is capable of change — or, at least, whether Wagner and Grant think that he is. We also talk about my nostalgia steering me wrong (not for the first time), the wasted potential of this story, how quickly it goes off the rails, and two ways in which this storyline is echoed in Dredd strips to come. Not bad for something that I describe as “literally a Scooby-Doo chase for 14 episodes.”

1:21:25-1:31:12: Again, if “Dredd Angel” was followed by something disappointing, “City of the Damned” suffers the same fate, with both “The Hunters Club” and especially ‘Monsteroso” utterly underwhelming us in terms of being overlong and unoriginal. (Really, a “robots gone wild” story? We haven’t seen those in, what, seven or eight volumes?) Oh, and then there’s the casual racism — and appalling denouement — of the firestarter storyline, as well. Jeff makes a reference to a mention in Thrill Power Overload about how burned out everyone at 2000 AD was feeling at this point, and, really? You can tell. 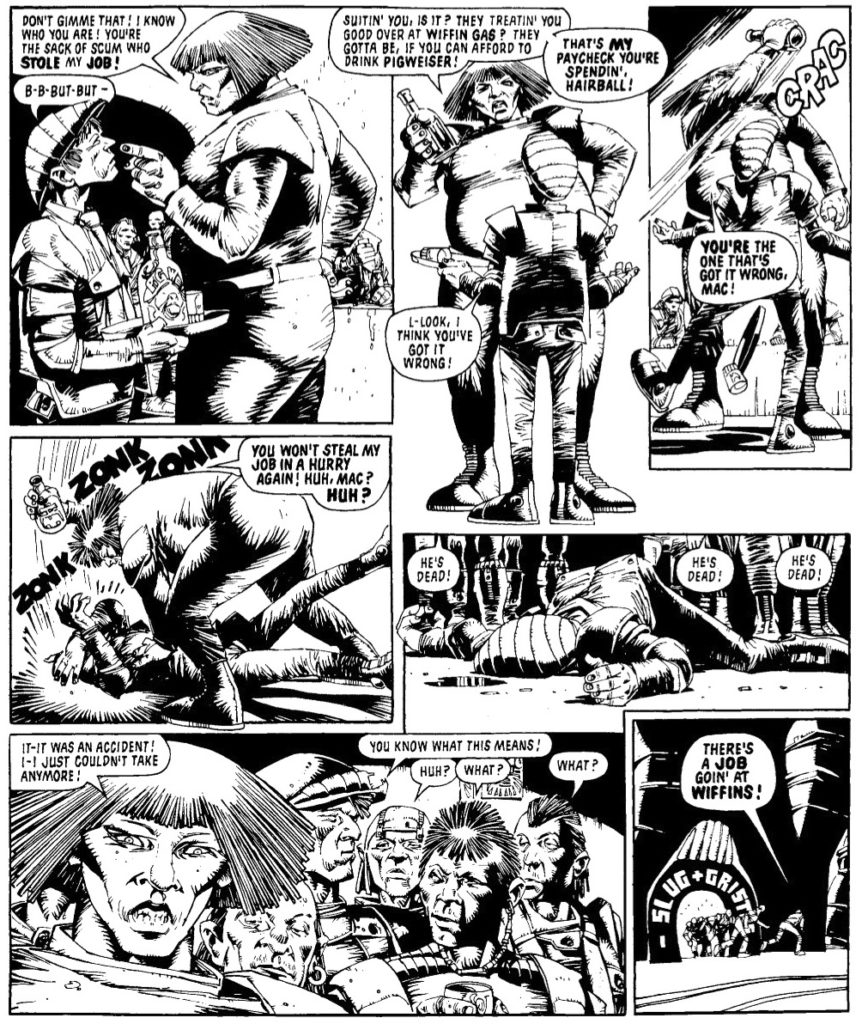 1:31:13-1:42:23: It’s not all bad news, though, as “Sunday Night Fever” brings Cam Kennedy on art and a story that has genuine weight to it, especially considering the era in which it was created. Out of nowhere, it’s as if Wagner and Grant have remembered that Dredd can be used to actually say something about the world. We also talk briefly about two other strips of note, both of which focus on the idea that Judges really shouldn’t have feelings — which is probably the running theme of this collection, all things considered. Also: the Judges really don’t care about the citizens of Mega-City One, but do like the idea of lasering people’s brains just a little bit too much. 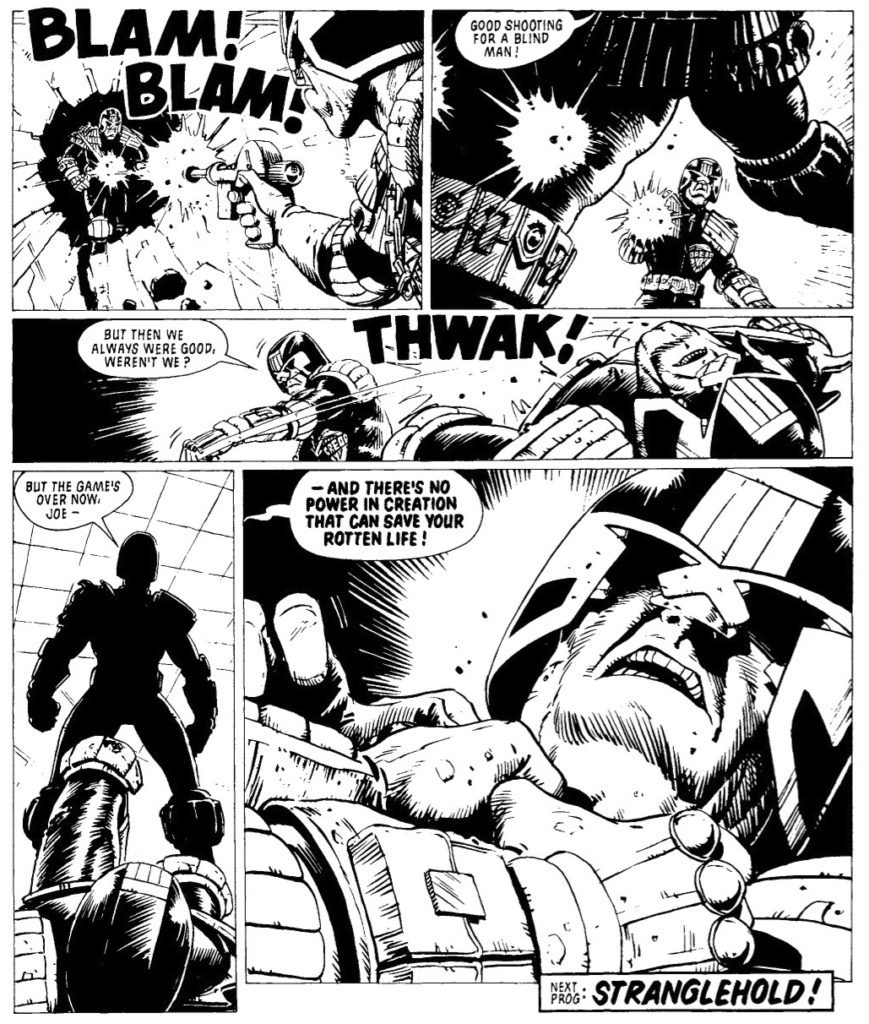 1:42:24-end: We wrap up by talking about what might have gone wrong with this volume to make it such a disappointment, from exhaustion on Wagner and Grant’s part to an over reliance on gimmicks, references and cheap jokes. (Introducing my unlikely reference to Darby and Joan!) The volume is enough of a disappointment that both Jeff and I point out that we probably wouldn’t recommend it to any newcomers, but at least Jeff and I agree on the highlights to be found inside. Before too long, we’re talking about our Tumblr, Twitter, Instagram and Patreon, and then looking forward to next month’s Case Files Vol. 9 read-through. (I completely forgot it has “The Midnight Surfer” storyline, despite the fact that this volume ends promising that next prog! I am a disappointment to everyone.) As always, thanks for reading and listening. Splundig Vur Thrigg, as the kids say.