If nothing else, you have to give Captain Victory and the Galactic Rangers credit for refusing to ape the Kirby aesthetic in any way. Oh, there are moments in the first issue where Joe Casey manages moments that feel appropriately Kirby-esque (The captions that explain “War can often breed sudden tragedy—as Captain Victory pays the ultimate price! And yet—this is where it all begins!” for example, have a rhythm and emphasis that feels true, to me), but this isn’t merely a cover version or rehash of what’s come before. 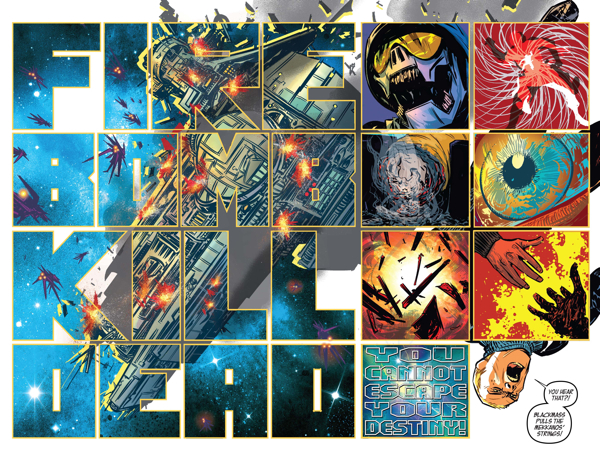 The problem is, I’m not entirely sure what it is, just yet, either. The first issue feels very familiar, but I can’t quite place the source; for all the Kirby influence, I got a taste of Jonathan Lethem and Farel Dalrymple’s Omega the Unknown series from a few years back (and, from that, the echoes of Gerber/Skenes/Mooney’s original Omega, which feels like a very clear influence on one of the plot threads this issue introduces). There’s some Frank Miller in there, too, from the The Dark Knight Returns era, right at the end (or maybe it’s Alan Moore’s Halo Jones, with the unappealing slang: “Oh, biz. That bulldog riffer don’t look kosher t’me,” indeed). As obvious as it seems given the presence of Nathan Fox as primary artist, Paul Pope figures in here, somewhere, too.

If all of that sounds great, then—it is? Or almost is? The problem is, it doesn’t come together as a coherent whole just yet. I suspect that’s by design, at least partially. One of the ways in which this first issue rejects Kirby is by doing away with the concept of the issue complete and and of itself—while Kirby’s original Captain Victory was arguably his most serialized work, in many ways, this new Dynamite series is going to be even more demanding on the reader’s patience, with the first issue throwing out at least three disparate threads to follow up in future issues, with at two very much teases or previews instead of anything more substantial.

Another difference this series has from Kirby—and also the earlier Dynamite revivals of his characters, as well as the even earlier Topps revivals—is the removal of the dynamic omniscient narrator outside of the opening pages. It’s an interesting tactic that works, I think: we start with something approaching the character and set-up as we know it, and then as disaster strikes, our expectations fall away and we’re left in this new world (or, to be precise, three new worlds) without a guide. There’s a sense of… uncertainty, perhaps, and something else that seems appropriate to the story/stories being told that’s appealing. 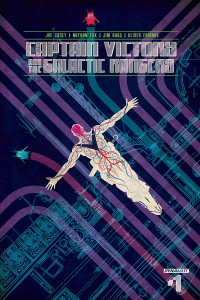 And, of course, the book looks amazing. The jam structure works well—Fox takes on the main narrative, with Jim Rugg and Ulises Farinas illustrating very specific sequences that break from that main story, so that it doesn’t feel as fragmented as some books with multiple artists; everything feels deliberate and coherent, even if it rejects a lot of the wonderful, still-attractive-to-these-eyes Kirby aesthetic (By which I mean his storytelling as much as his character design or dynamism; Kirby was a very controlled artist in his pacing, whereas this is much more freewheeling).

Whether or not the new Captain Victory works for you isn’t as much of a Kirby thing as previous attempts at revival, but instead a test of your willingness to sign onto something that remains almost as much of a mystery in terms of its intent and direction after its first issue as it did before the series launched. Me, I know this isn’t perfect and could easily fall into prevention or, worse, incoherence all too easily, and yet, I’m on board. There’s something about not knowing that appeals, and if nothing else, it’s a beautiful book. On some level, Kirby would be proud.

(For those wondering: You’ve not missed this issue last week; it’s out this Wednesday–I got an early preview copy from Dynamite.)

6 comments on “Continuity is Tribulation: Graeme on the new Captain Victory”