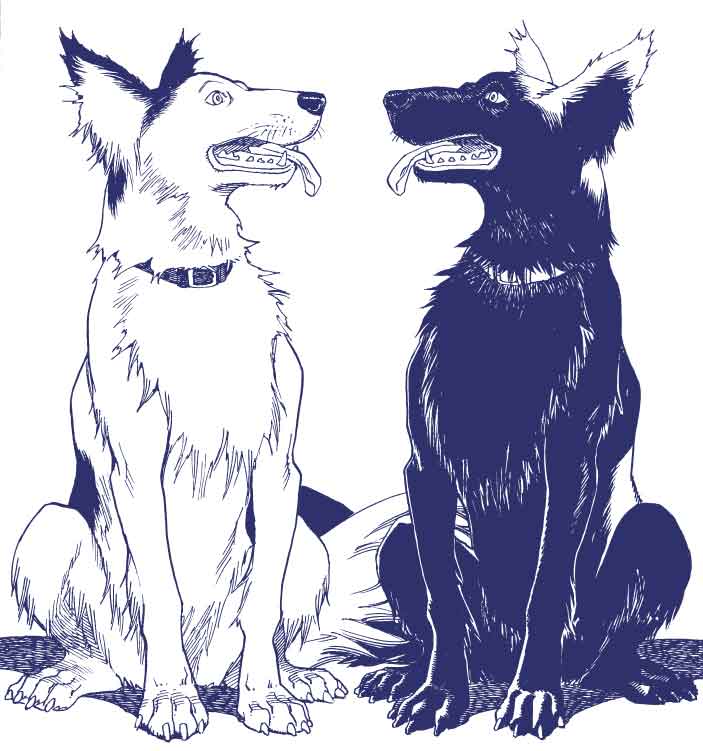 (From Satoshi Kon’s Opus. Tough call as to which image to lead with.)

Oh my gosh, you guys.  On the one hand, this was kind of a nightmare, what with my computer’s monitor going kablooey on the day we were scheduled to podcast and with all the organizing of all the stuff I need to record, edit, and upload one of these here episodes.

On the other, we kind of crushed it?  Sure, the show notes are gonna be a tad brief, but in just under two hours, Graeme and I talk Age of Ultron, Superman #40, Justice League #40, Batman #40, and Multiversity #2 in a…surprisingly organic way? And we also cover Satoshi Kon’s Opus because a Patron demanded it!  (Actually, it was a pretty polite request.)  Check out the show, and check out the show notes below!

00:00-5:40: Greetings! Do we know the difference between a comma and a quote mark, a hawk and a handsaw? Do we know how many times Jeff’s computer has blown up on him? If you have a rhetorical question, now is the time to pose it! But be quick, because there’s only a brief amount of time before we get to…
05:40-17:58: Avengers: Age of Ultron! Graeme has seen it, Jeff has not, so there is a spoiler-free discussion of the movie (although, really, if you want to know the truth, Jeff had the phrase, “Just go ahead and spoil it, Graeme, that’s fine, I don’t care” on the tip of his tongue for this entire discussion but said nothing. Does Jeff really care about being spoiled about a Marvel Universe movie? It sorta seems like it, despite his protestations to the contrary….) Anyway, yeah, we talk about Age of Ultron. Also discussed: movies that are good in the theater; AoU’s reaction to Man of Steel; what they did with The Vision; movies that are written and directed by one man but feel like they were created by committee; all the problems with a shared universe concept for action movies; Joss Whedon, ostensible creator of the Agents of SHIELD TV show talking about how as far as he’s concerned, that show doesn’t exist; and more.
17:58-23:36: How we get from there to Superman #40 is a mystery I’ll leave to the listeners, but there is a very solid link between the Avengers movie and this issue written and drawn by John Romita, Jr. Come and find out what it is! Discussed: Scott Snyder’s Batman vs. Geoff Johns’ Batman; plotting and the editorial hand that sweeps stories forward as opposed to the slipperiness of properly giving credit in a shared universe, which leads us to… 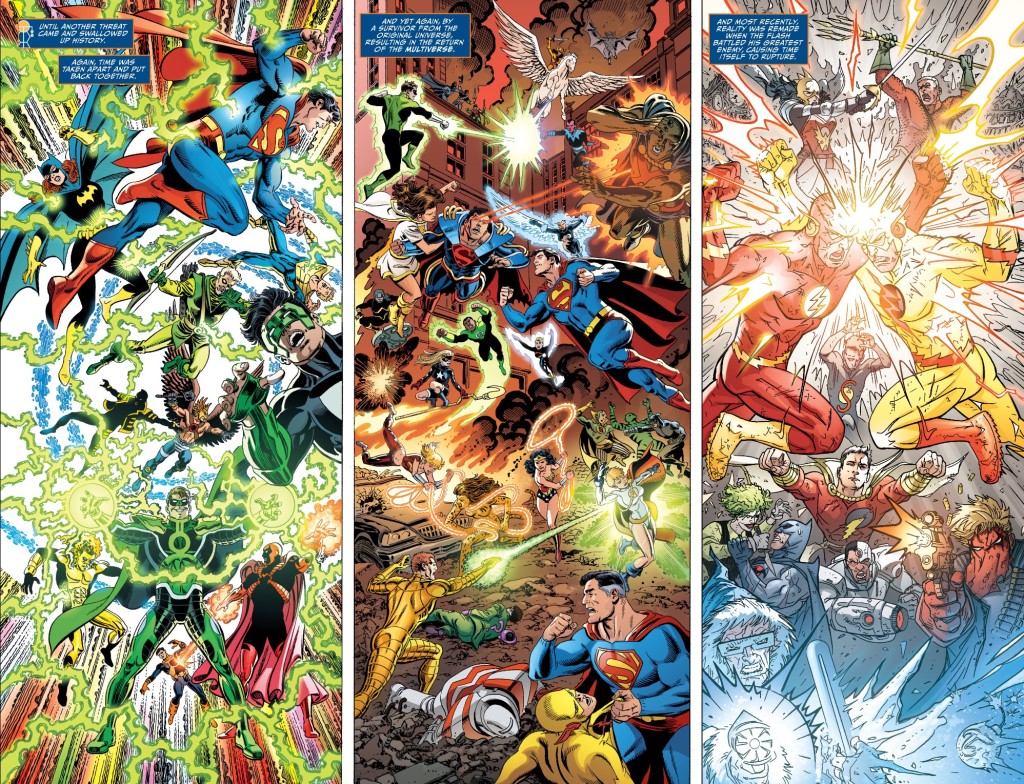 23:36-51:40: Justice League #40 by Geoff Johns and The DC Art Squad of Kevin Maguire, Phil Jimenez, Jim Lee, Jason Fabok (and more!), which Graeme thinks owes a semi-substantial debt to Multiversity? But compounding this problem with making sure creators get credit is the way the system allows editorial fiat to go uncredited and, frequently, unexamined. Also mentioned: the characters from the latest Pixar movie watching the Avengers: Age of Ultron trailer; things fanboys cheer for at a fanboy movie; the discussions we might be having after Ant-Man, and the discussions we were having before the first Avengers movie; the just announced Valiant multi-movie platform; why creators for the Marvel movie universe can’t count to three unless they’re counting the number of SHIELDs in existence; change versus the illusion of change versus the illusion of illusion of change; another terrifying food metaphor from Jeff; and (again) more.

51:40-01:00:14: Multiversity #2 by Grant Morrison, Ivan Reis, Joe Prado, Eber Ferreira, Jaime Mendoza, and the coloring team of Dan Brown, Jason Wright, and Blond! One of us liked it and one of us pretty much did not. Can you tell which of us will turn out to be which? (Hint: Jeff refers to it as “the comic shop version of Multiversity.”)

It’s All About The Benjamins, Baby (Where “Benjamins” is equal to “Goats”)

01:00:14-1:20:23: Batman #40 by Scott Snyder, Greg Capullo, Danny Miki and FCO Plascencia! This is another book one of us liked more than the other (Hint: Jeff wrote about it for the website), but we also have a lot of stuff to say about it here. Overwrought allegory or perfectly fine wrap-up to a story and a fun tease for the future? Also discussed: Graeme’s insights thanks to interviewing both Snyder and Capullo; Jeff’s insights thanks to talking to Jeff; comparisons to Hickman’s Avengers; goats, Gotham, and “hm, goats!”; the clumsiest summing up of a ‘70s Iron Man comic ever; and (yes) more. 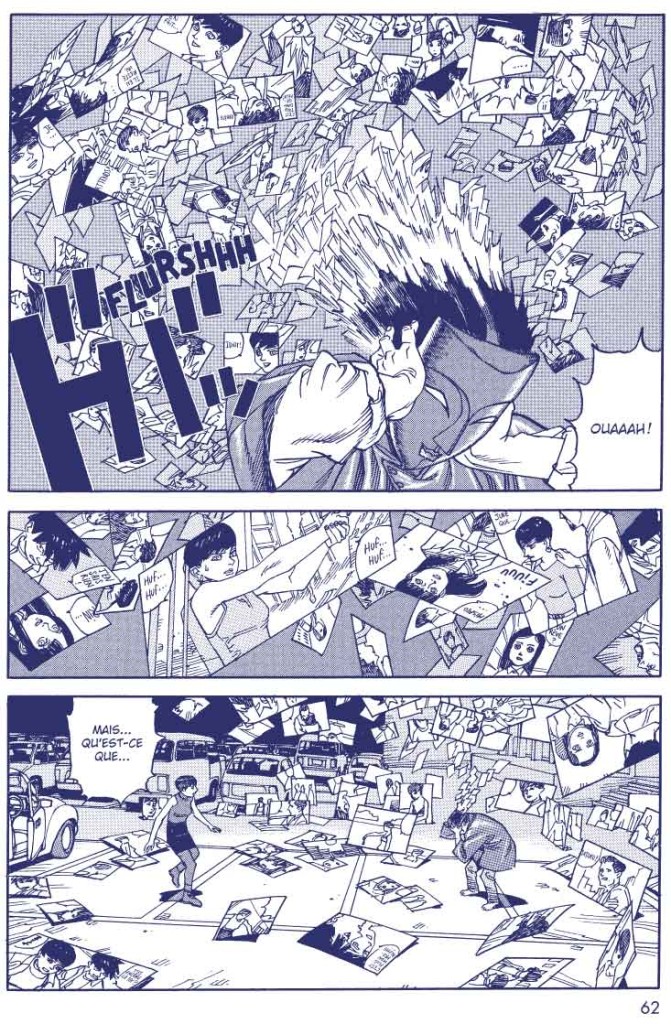 01:20:23-01:40:16: Thank God, Graeme remembers we were scheduled to talk about Satoshi Kon’s Opus because of course Jeff totally forgot. So, thanks to the recommendation of patron Eric Rupe, we read Satoshi Kon’s Opus

and we talk about it here. Will the split machine once again cause Jeff and Graeme to disagree about a book, or do we finally achieve unity? Either way, you get a full spoilers deep cut conversation about Kon’s unfinished story of a manga creator trapped in his own manga. Mentioned: Perfect Blue; Darren Aronofsky; Purple Rose of Cairo; Buster Keaton; all kinds of gnostic subtext Jeff forgot to even mention although he nevertheless discusses a bit of subtext to the story that Graeme thinks only Jeff sees in the story; the nature of creativity; the goofiness of Golden Age comics; and (still) more.
1:34:45-1:40:16: Convergence: Shazam #1 by Jeff Parker, Evan “Doc” Shaner, and Jordie Bellaire! A comic on which even Jeff & Graeme can agree! We love the art but are also impressed by how much Jeff Parker is able to shape the feel of a classic Captain Marvel story. It simultaneously gives him hope and dread for how DC will handle its universe once it emerges on the far side of Convergence. (Or not, depending on how sold you are on our “Stomach Fauna September” idea.)
1:40:16-1:46:02: Hey, here’s a super-quick recommendation from Graeme: Batman: Earth One Vol. 2

by Geoff Johns and Gary Frank which he talks about super-briefly; the Star Wars Legacy run by Corinna Bechko and Gabriel Hardman (available on Marvel Unlimited…at least for some of us, if Graeme’s experience with the Amazon Fire is not anomalous). Good stuff. 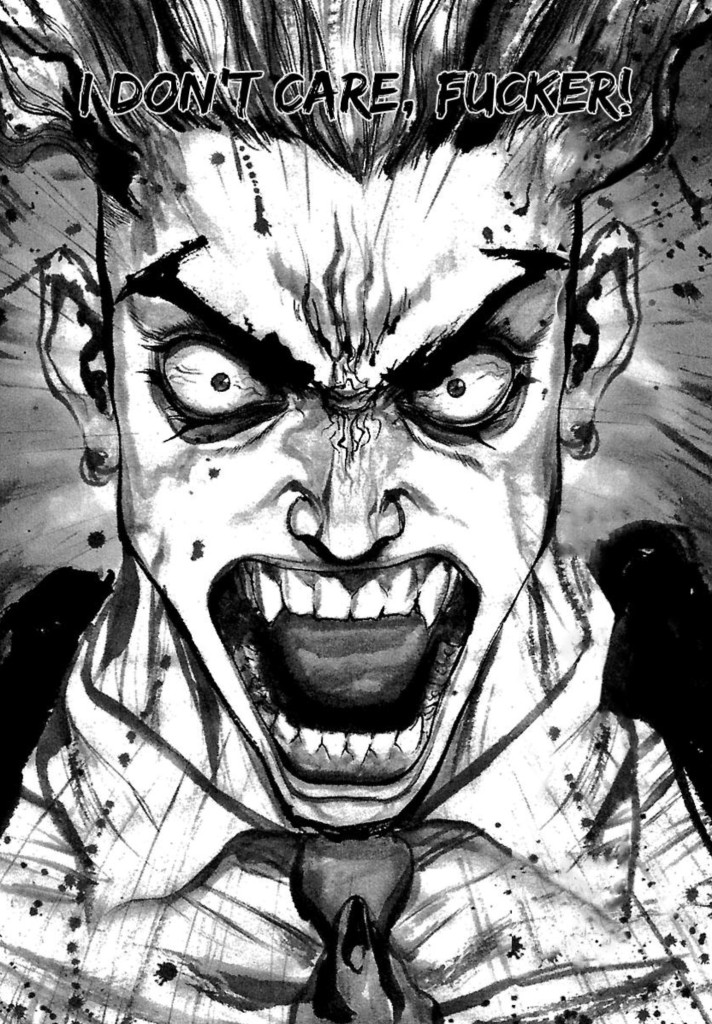 1:46:02-1:52:36: And from Jeff, there’s the slightly harder to recommend without reservation (okay, the term we should really go with here is “problematic”), the first 108 chapters of Sun-Ken Rock by Boichi, currently available on Crunchyroll, a series that makes Kazuo Koike seem like bell hooks by comparison. I admit, I’d still be reading it if they didn’t have a thirty chapter gap on Crunchyroll, but please, in the name of God, do not read it if you are underage or in any way impressionable. [WARNING: Jeff uses another food analogy here, but it’s actually…halfway decent?]
1:52:36-end: Closing comments, a.k.a., “next week is a Baxter Building episode? NO IT’S NOT” (seriously, it’s not). The Tote Bag Integration! Places to look for us at—Stitcher! Itunes! Twitter! Tumblr! and, of course, on Patreon where, as of this count, 104 patrons make this whole thing possible. 104! Holy smoke, patrons on Patreon, how we love you.

Okay, that’s that!  See you next week (or, just as likely, in the comments!)