I remember purchasing StormWatch #37 new off the shelves in the summer of 1996, the first issue of that book I had ever bought. Incoming writer Warren Ellis was part of the reason, for sure: he’d been busy at Marvel for a year or so by then, revitalizing Excalibur (and StarJammers!) and touching a bunch of other books that I’d go back and check out as back issues later on. 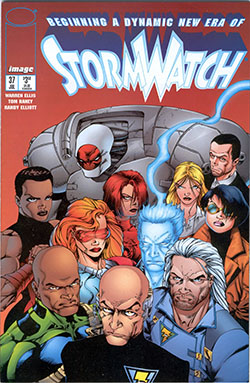 The cover was another part of it, an homage to the “crowded elevator” covers from my beloved Giffen/DeMatteis Justice League run. And Alan Moore was part of it too–he’d been on WildC.A.T.s for a year or so at that point, showing that these half-baked early-Image/Homage Studios/WildStorm superheroes could be tremendous fun in the hands of more polished writers.

Ellis’s run on StormWatch would go on for 13 issues, primarily with artist Tom Raney, and I loved every one of them. These were superheroes as I wanted to read them, smart and cynical and sarcastic, yes–that’s how we always seem to remember action-based 1990s pop cultural detritus–but also clever and thoughtful and ineffably fresh. New powersets, new takes on old powers, and a general sense of purpose and change that was missing from the legacy superheroes over at Marvel and DC.

The book would be relaunched in a second volume, art first from Oscar Jimenez, but it foundered a bit, couldn’t seem to find its voice…and then Bryan Hitch came on to draw an arc, and something seemed to click. Ellis wrapped up that second volume by killing off most of the team (in a crossover with a licensed movie property that had NOTHING to do with the StormWatch characters or their history, just to make future reprinting as challenging as humanly possible), and relaunched the book again, this time with Hitch onboard as the regular artist.

Only instead of StormWatch 3.0 or Storm3atch or whatever, they called this one The Authority, and modern superhero comics have been borrowing the tricks introduced in the first twelve issues of that series ever since. It’s The Authority that people cite (or blame?) for a lot of what’s commonplace now: widescreen panels and a “cinematic” approach to the visual storytelling; computer coloring and specialized lettering effects; more proactive superheroes targeted at a notably older audience.

But for my money StormWatch has always been the better series. If The Authority is OK Computer–the brilliant, self-conscious, knowing reinvention of an artist and their genre, StormWatch is The Bends, the messier, less-well-regarded, slighty more traditional predecessor on which you can hear the band coming up with all the tricks they’d use in the future masterpiece. 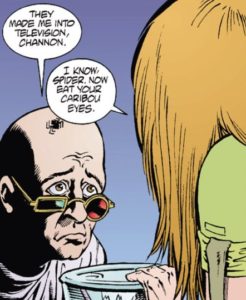 This isn’t just nostalgia talking, either. I checked the collections out of the library a few years back and was pretty surprised to find that they read even better than I remembered. There’s an energy when a creator is trying to make their name that seems to fade a bit when they become A Name–when Warren Ellis becomes Comics’ Official Mad Bastard Warren Ellis™–and you can see that transition happen over the volumes of StormWatch and into The Authority. (And also in the concurrent Transmetropolitan, where Ellis tackled that very concept head-on.)

I have much less enthusiasm for Ellis’s more recent work; I don’t particularly think he’s lost his fastball so much as he’s started playing a different sport than the one I bought a ticket for. (More on that in a bit.) And that’s, obviously, totally fine. He should be writing what he wants, how he wants, and I have the option to read or not. That’s okay.

That’s how it’s supposed to work, in fact: you grow up and change, and the artists you like change at the same time, and you find new people who vibrate at your new frequency. But comics stunt that growth, sometimes–the same way we fading old people keep following characters we probably should’ve let go of years (if not decades) before, we also cling to the same creators: this will be the time that Chris Claremont’s return to the X-Men feels like it did when I was 12; this will be the time resetting Peter Parker to high school will make me relate to him like I did when I was 9; this will be the time that Walt Simonson revisits Norse mythology and I get that same sugar rush as I did on the bridge at Gjallarbru all those years ago.

So: Warren Ellis rebooting the property that he used to redefine the superhero genre starting more than 20 years ago. Surely this will be the time that blah blah blah.

It isn’t, of course.

Based on the first issue, this is shaping up to be a very good comic. It certainly looks glorious, from the trade dress to the art (which, somewhat weirdly, made no strong impression on me: it was pleasant to look at and easy to follow, with characters acting effectively through movement and expression; it became terrific by being nearly invisible) to the lettering to the coloring, this is a good-looking product. It feels slick and new and different. It reads well, too. Ellis has honed his craft over the years, and the opening pages especially are a masterclass in comic book writing and use of panels and space. (Kieron Gillen talked about this at some length on Twitter.)

In his advertorials about this book, Ellis has made a few references similar to this one: “I knew I wanted to preserve the themes from the original work by Jim and his friends–their fascinations with conspiracy theories and black ops, for instance.” Which, I mean, sure, there was some black ops stuff in those books, and some of the general background smog of conspiracy theory that was everywhere in the X-Files-drenched 1990s, but to me none of those were what stood out about the books: what I liked, and what Ellis isn’t nearly as interested in anymore, was the fact that they were good, clever, well-executed superhero books.

It’s clear from many of his public statements and the overall trajectory of his career that Ellis views superheroes as a largely tired genre, useful mainly for paying the bills and (presumably) financing the creator-owned non-superhero work that interests him more. Trees and Injection are good examples of what I think of as “current” Ellis–sci-fi of the weird, concerned with the future as projected off from our current present, and peopled with the Ellis-ian versions of action movie archetypes. I like both of those books, but they don’t connect with me on a visceral level. It’s a distanced appreciation: I can appreciate the craft, and sometimes I get fully immersed in a scene or an interaction or a bit of conversation, but for the most part it’s just well-executed entertainment that doesn’t feel fully for me.

The Wild Storm feels like it’s shaping a version of the Wildstorm universe into the framework of one of those books, stripping the superhero veneer off of it and steering hard into the more science-fictiony/ain’t-the-world-weird elements.

(The virtuoso opening scene makes this pretty metafictionally explicit, a nine-panel grid of a character who looks like Zealot from the old WildC.A.T.s comics: she’s got the distinctive facial markings that were part of that characters costume, and also uses “Zealot” as her callsign…but as she scrubs off thosee facial markings we realize that they were just bloodspatter from a recent fight. “You thought you were reading a superhero book,” it seems to be saying, “but we’ve got actual honest-to-god viscera in place of your silly costumes, and anyway she’s washing it off so she can walk out on the street without looking ridiculous.”)

What this feels the most like, to me, is Ellis’s aborted newuniversal at Marvel: rebooting a comic universe that has long since wrapped up, stripping the superhero facade off and steering into sci-fi territory, choosing a starting point where a global event sparks awareness of the new strangeness of the world. But newuniversal didn’t have any built in relevance to Ellis, and in fact his interviews at the time made it clear that he had no nostalgic tie to Marvel’s failed New Universe books at all. And, to be blunt, neither did anyone else that I’ve ever met or heard of. People buying into newuniversal were most likely buying in to see Warren Ellis do Warren Ellis things in a distant corner of the Marvel Multiverse.

I’m not sure it’s so clear-cut with The Wild Storm. Ellis was a huge part of what made the original Wildstorm universe interesting (because, let’s be honest, those original pre-Ellis, pre-Moore Wildstorm books are remembered only slightly more fondly than the original New Universe stuff). So coming into this it seemed reasonable to hope that some two-decade-later echoes of that might inform this reboot. And–again, based solely on the first issue (out of a planned 24)–so far it doesn’t have that feeling to me.

I guess it just seems odd to me that this excellent entry into Ellis’s canon of sci-fi weirdness is being published under the guise of a Wildstorm reboot. Because folks who love Trees and Injection might well stay away for fear that it’s some kind of garbage superhero thing, or, even worse, some kind of garbage superhero nostalgia thing. And meanwhile, in folks who quietly would kinda really enjoy this specific garbage superhero nostalgia thing, it sets up expectations that the book currently seems to have no interest in fulfilling.

So I finished this book with a strange, bifurcated bit of optimism: on the one hand, I hope that it steers a little closer to the StormWatch I remember. Not necessarily a lot, but enough to justify being tied in at all. On the other, I hope that my reframed expectations put me in a better place for the rest of the series, and that I’ll do a better job of appreciating this very good comic for what it is, instead of grumping at it for not being what my idiot inner-college-kid kinda wanted it to be.

3 comments on “[Generic Weather-Based Pun]: Matt on The Wild Storm #1”