I mean, he’s not, obviously; even beyond the “he’s a fictional character, so what is death, really?” nature of the concept, there’s also the reality that 2000AD isn’t going to kill off its most popular character anytime soon, especially when you factor in the fact that he’s also got a spin-off title to carry, the only 2000AD character to do so.

But as far as almost everyone — including, until this week, the reader — knows, Judge Dredd has been dead for the last month or so, after his shuttle exploded in mid-air at the end of 2000AD Prog 1977. Since then, both the Dredd strips in 2000AD and Judge Dredd Megazine have become aligned in terms of continuity, with both telling simultaneous, parallel stories about a world in which Dredd is presumed dead, and exploring how that information is handled by those around him and the (political and personal) impact it’s had. It’s a wide-ranging story about a Dredd-shaped hole, and it’s kind of wonderful.

Even before Dredd’s “death,” the groundwork was being laid for the current events. This is one of the strengths that Dredd has, one that other long-running serial comics should have but rarely find access to; the long game aspect. In the serial that ended with Dredd’s apparent demise, two things were happening: Dredd and a squad of trainee Judges (as well as Rico, cloned from the same DNA that produced Dredd himself, but that’s neither here nor there yet) were in the Cursed Earth trying to track down criminals cutting off Mega-City One’s access to food and supplies, while back in MC1, Chief Judge Hershey was trying to deal with two political problems: that Brit-Cit wanted to extradite Dredd and another Judge for their actions in a story from last year, while the Chaos Bug from the 2011/2012 “Day of Chaos” storyline has left the Judges too shorthanded to keep the city safe, pushing them to consider negotiations with Texas City. With Dredd gone, all three of these threads come to a head.

The first plot, the Cursed Earth storyline, comes to a head in the Megazine issues, with Rico taking over the investigation (and some potentially dodgy racial politics coming into play, when the Judges run into Native Americans trying to maintain law and order in the middle of nowhere, but I’m willing to hold off on judgement about that for now). It’s an interesting move — Rico is, to all intents and purposes, Dredd when 2000AD launched: physically, definitely, but also in terms of his lacking the experience and curmudgeonly old man quality that the character has grown into in recent years — and one that demonstrates the ways in which Dredd is such a compelling character. Rico has a lot going for him, but he’s not Dredd, and the ways in which Carroll demonstrates that is wonderfully subtle: he’s so almost the Dredd we know, and yet… not.

Meanwhile, all of the political maneuvering has taken over the 2000AD strip, and it’s amazing — watching Judge Joyce (the Garth Ennis-created character, as if his name didn’t give it away already) extradited to the U.K. for strategic reasons, only to find that things really aren’t what they seem, while Hershey has to swallow her pride and accept Texas City’s assistance despite their Chief Judge clearly being an untrustworthy character (and also someone who just seems difficult to get along with, so fake is her sweetness). It’s deliciously uncomfortable, in the best way — and, with this week’s latest reveal only going to become more complicated, with the fallout being all the more devastating when it arrives. 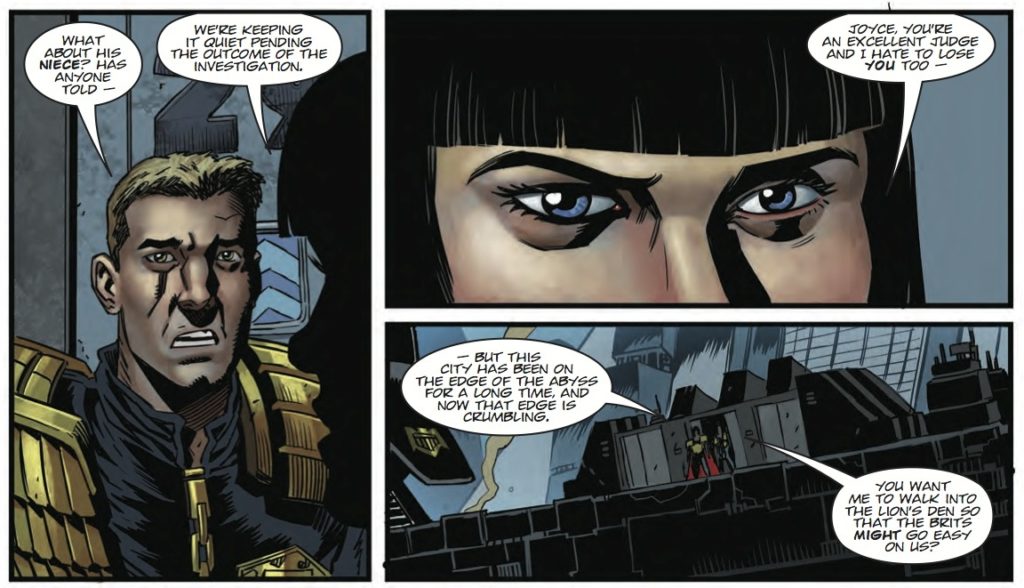 What makes this even more interesting as a reader is the uncertainty about when that fallout will arrive. Dredd (the strip) continues no matter what, and if there’s one thing that stories like “Day of Chaos” or even “Necropolis” and “Dark Justice” demonstrate, it’s that elements can literally take years before coming to fruition. Dredd the character will almost certainly be back sooner rather than later, but as to the circumstances surrounding his “death” and the comeuppance for those responsible? There’s absolutely no sign as to whether that will come quickly or in years to come.

There’s something about that mystery that makes this storyline — and the entire idea of taking Dredd as a character out of the equation — more exciting to read. Anything, it feels, can happen. And in comics, that can be a very rare thing indeed.

One comment on “The Man Who Wasn’t There: Graeme Catches Up On Judge Dredd”