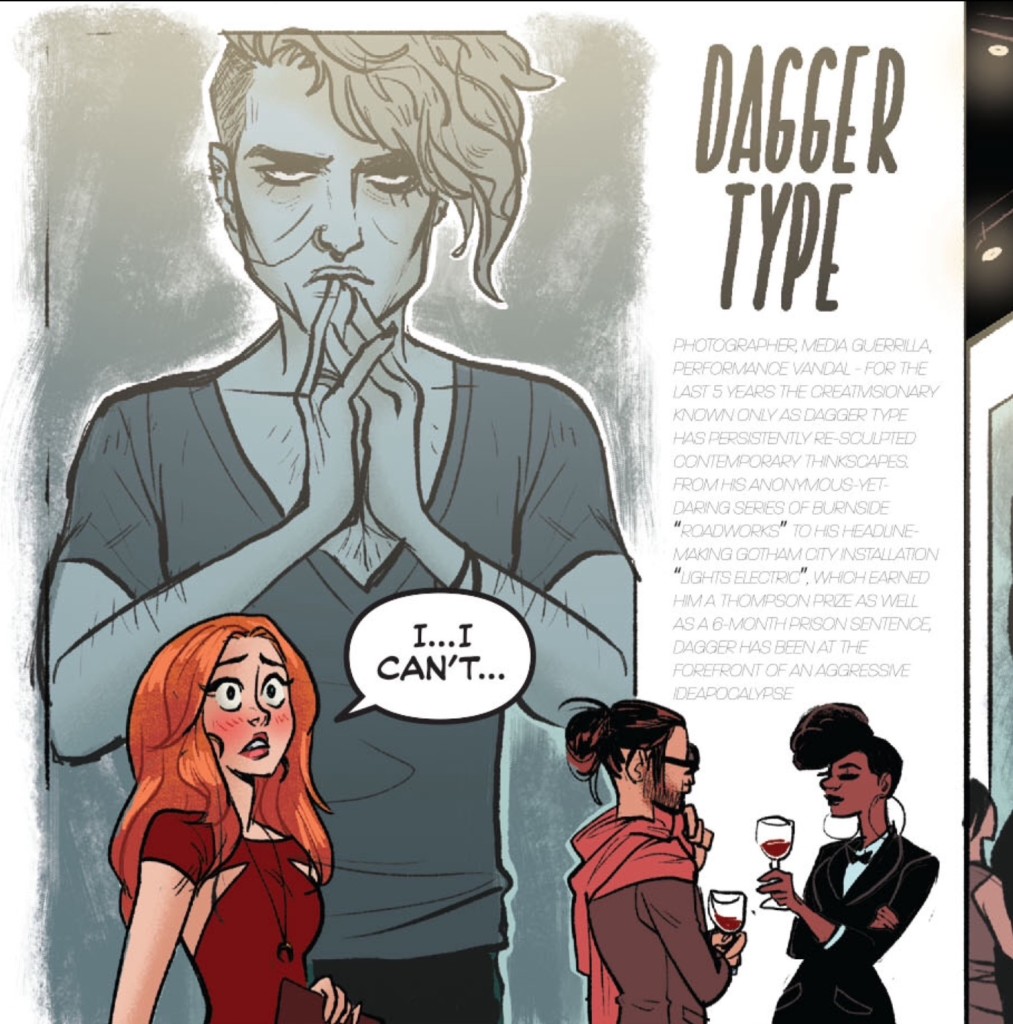 [I’m going to be talking about Batgirl #37 from soup to nuts (no pun intended), so please don’t read if you are worried about being spoiled.]

I can be a small and petty person.  After being one of the only people on the planet that didn’t love Batgirl #35 and 36, the first two issues of new creative team Cameron Stewart, Brenden Fletcher, and Babs Tarr, I felt a big smug when issue #37 came out and hit a massive pothole of controversy. I’d wanted to like issues #35 and #36—really, really wanted to like it—but thought both overstuffed issues had paced things weirdly and, more troublingly, the DJ villain in the first issue seemed a bit culturally insensitive.

That insensitivity apparently amped up for their third issue, as Batgirl faced off against Dagger Type, a villainous imposter that turned out to be a man in drag believing himself to be the real Batgirl. 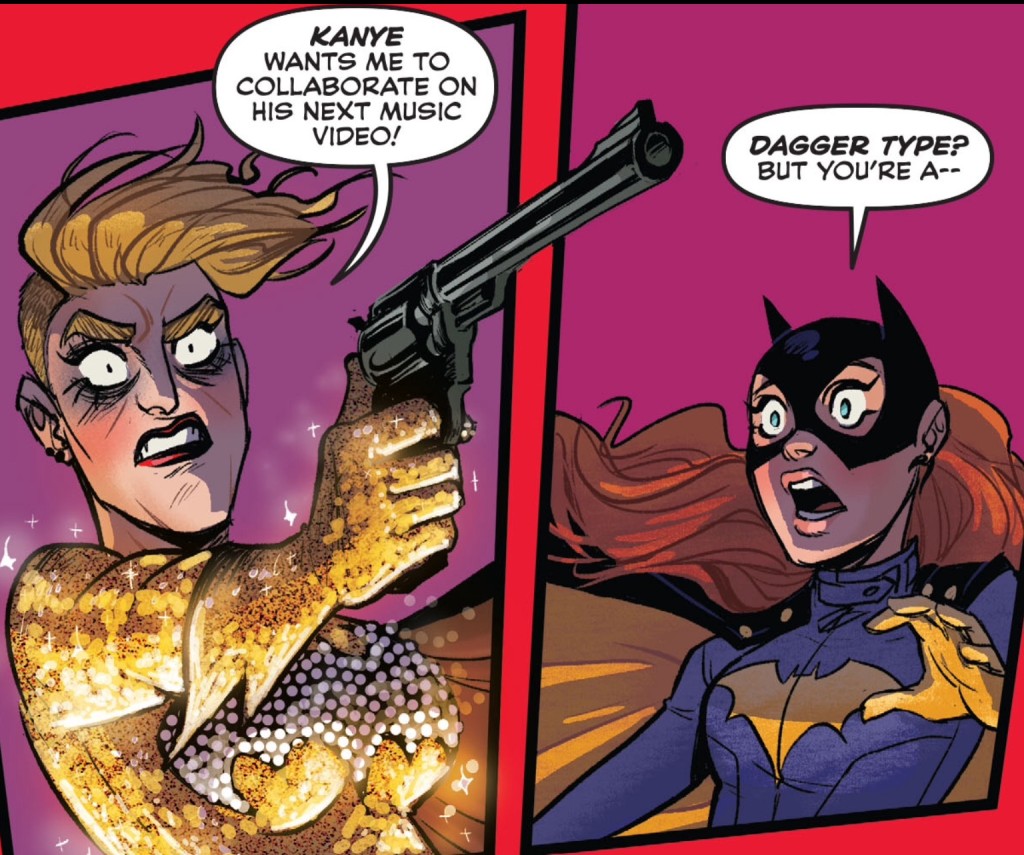 “She’s a man, Babsy!” is the pun I would make if I were a lesser person.

People were upset by the transphobia of the portrayal and a short time later, Stewart issued the following apology on Twitter:

Batgirl 37. We made mistakes. We’re deeply sorry. We will do better. pic.twitter.com/fCOEJPk0vP

At the time, I’d bought the issue but had yet to read it. But I read the apology with both admiration for the way the creative team owned their mistake—this wasn’t one of those “we’re sorry if we offended anyone with delicate sensibilities” type of apologies—with a bit of the aforementioned pettiness.  I thought, ‘What else could you have been intending when you set up a Batgirl imposter as a crazed man in drag, mascara running down his cheeks, waving a gun about?’ 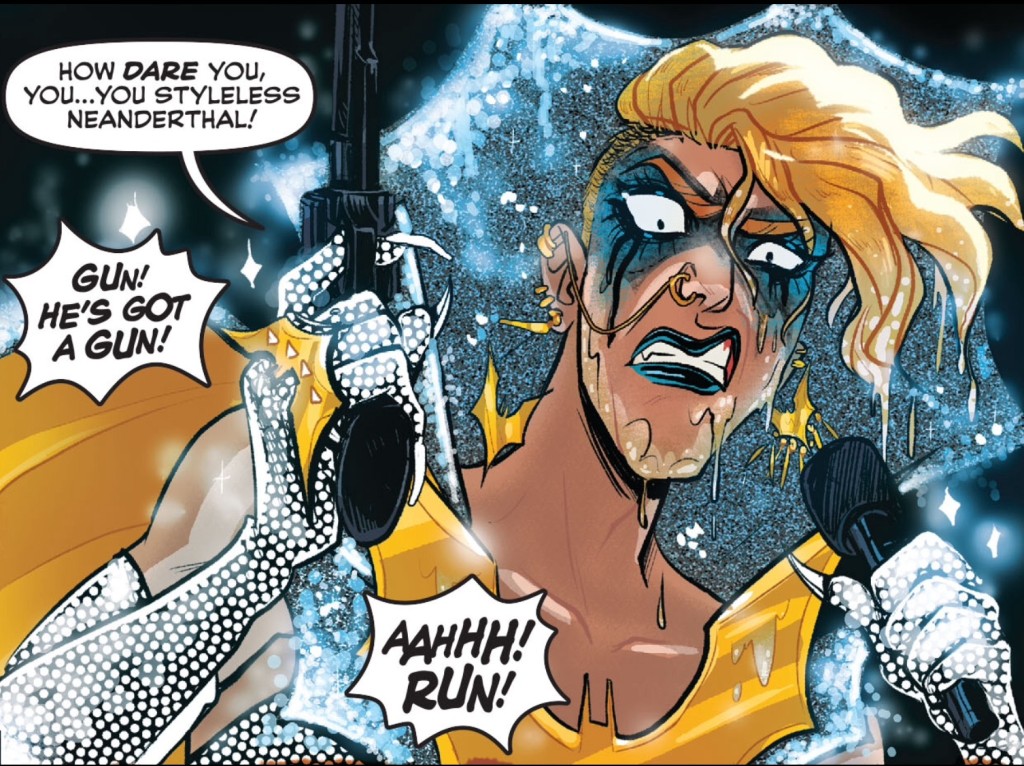 (I mean, come on. The running mascara thing is practically a trope in itself.)

Well, the other day I finally got around to reading Batgirl #37 and overall, I liked it a lot more than the previous issue.  It was a little frenetic while actually having more action, more zip.  And by the time I got to the end, Irealized that in fact Stewart and Team did have an entirely different set of goals with good ol’ Dagger Type and that those goals had kept them distracted from the transphobic reading of the issue.

Now, the imposter villain is an old idea (The Chameleon pops up in issue #1 of Amazing Spider-Man, back in March of 1963, and the idea was far from new back then) but Stewart & Co. are using it to slightly different ends here which is where the drag angle comes into play: from what I can tell, Batgirl #37 was crafted by Stewart and Fletcher as a clever way to address the concept of two men taking over a female led title written for over three years by a popular female creator.

Superhero comics are rife with male creators treating female characters as little more than sexualized images deprived of the depth of characterization accorded male characters.  Similarly,  Dagger Type appropriates Batgirl’s image with a series of glamorous photos featuring a fake Batgirl…but only Barbara herself and her friend Diana know for certain that the Batgirl in the photos is a fake.  Many attending the show believe the Batgirl in the photos is the real deal, just as they believe the actions of the imposter Batgirl out in Burnside to be those of the real Batgirl.  And of course, when a creative team takes over a book, not matter how out of character the lead becomes, it is “the real” Batgirl who is doing what the team has her do.  At the end, as Type melts down, he bellows, “I am the real Batgirl!  The only one who matters!”

Batgirl #37 was a supposed to be a lark, a laugh, where the men writing the character are aware enough of their responsibility to Batgirl and her fandom that they spoof themselves as deluded, self-important comic book creators, ones conceited enough to believe, as Dagger says, “the artist is really the subject, and the subject, his brand!” 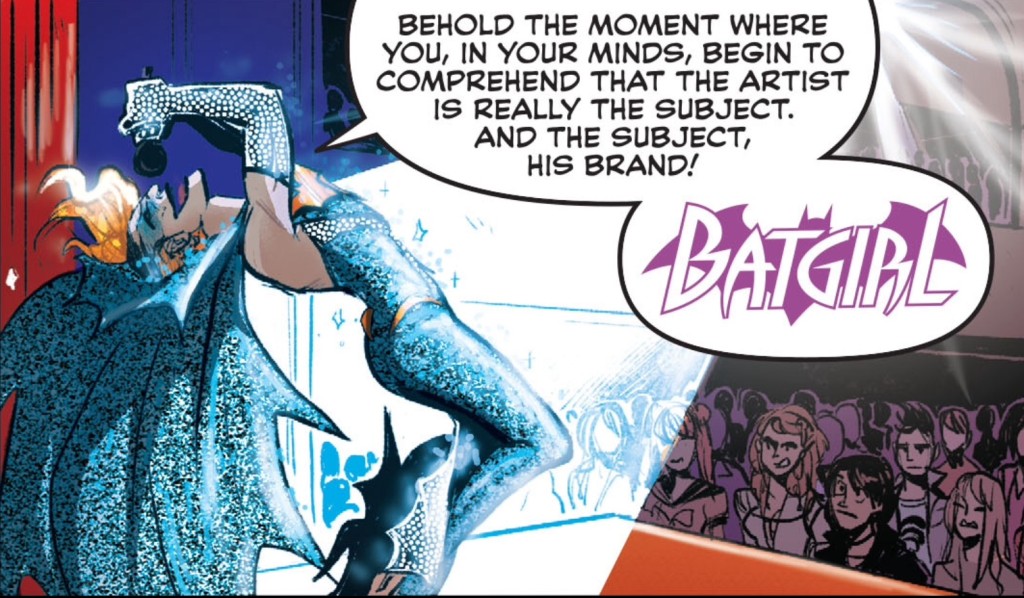 (Abandoned at the time of writing this essay: thoughts about Jeff Koons, Matt Fraction.)

He’s defeated (of course) and at the end of the comic Batgirl takes a photo of herself, saying “this is the way I choose to be seen.”  It’s an acknowledgment and statement of intent by the creators that their revamp of the character, their difference in tone and theme from Simone’s issues, aren’t a matter of style, artistic conceit or male misappropriation: it’s a way to reframe how the character is seen, a way that is true to the conception of the character.

Of course, in doing all that, they were unaware of the other reading of the issue, the transphobic one.  And while I wonder how that might have changed if someone with the right sensibilities had drawn it to their attention, I think the issue would’ve been misunderstood anyway:  the Batgirl launch was lauded before it happened,  a hit with the fans, so Stewart, Fletcher, and Tarr were defusing a bomb that had never been set.  Even when creators and fandom are on the same page, the page is written before it’s read.  As the book goes forward, I expect that even if this chapter isn’t revisited later, its lessons will remain learned. 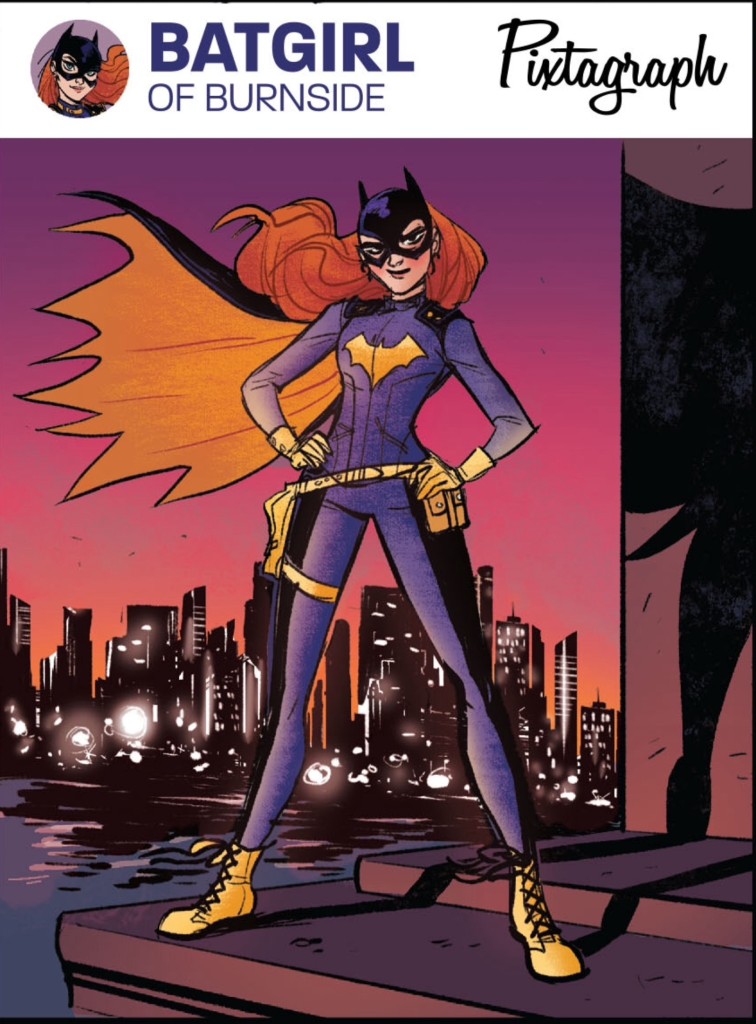 Sigh. The art on this book is so great. Sorry I didn’t spend any time talking about how awesome you are, Babs Tarr!

9 comments on “Hearts Like Slugs: Jeff Gazes at Batgirl #37”