Overall, it’s been a pretty great week for good news—subsidies for The Affordable Care Act upheld, gay marriage legal a nationwide right, Evangeline Lilly shitting on recent Ant Man comics—but, me being me, there’s a piece of unsubstantiated news (gossip, if you will) that has me in a tizzy.  Comixology 4.0 is coming, and it plans to integrate a social media platform into the app.

Assuming this is true, I can only respond: 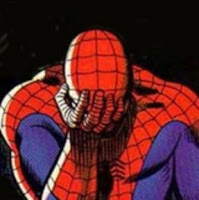 There’s no real need to be obsessively crabby about this: I can pretty much explain my arguments in a few succinct bullet points.  (If only I had the internet savvy to realize I’m writing a listicle!  I should break out the latest WordPress SEO add-on and retitle this article:  “This Old Nerd’s List About Internet Comics Retailers Will Break Your Heart. (And The Third Point Will Make Apple Gasp in Shock!)”)

Digital comics expanded like crazy over the last few years merely by picking the lowest hanging fruit:  lapsed comic book readers, comic book readers in towns without comic shops, comic book readers who either lack the inclination or the skill to torrent.  To decide to plug in a social media platform is to say, in essence, “well, that’s all we’re gonna get.  Might as well just make it even more insular from here on out.”

I would be very surprised if, in any of the meetings where they discussed the sales plateau, anyone spoke up and said, “Frankly, maybe taking the purchasing option out of our iPhone app might be a contributing factor? ”  I’d be triply surprised if someone said, “Also, maybe if we made it so our website wasn’t an unsearchable ball of shit?”

Because that is the horrible irony of Comixology:  the market leader in a field everyone said would free us from the tyranny of The Android’s Dungeon is itself the digital equivalent of a long windowless basement stacked to the ceiling with unmarked, inaccessible long boxes.  Just a few days ago, I went to the Comixology website to see if I was missing an issue of Afterlife with Archie.  So I put in “Afterlife with Archie” in the search field and…well, it crashed.  But the second time I searched on Afterlife with Archie I got this: 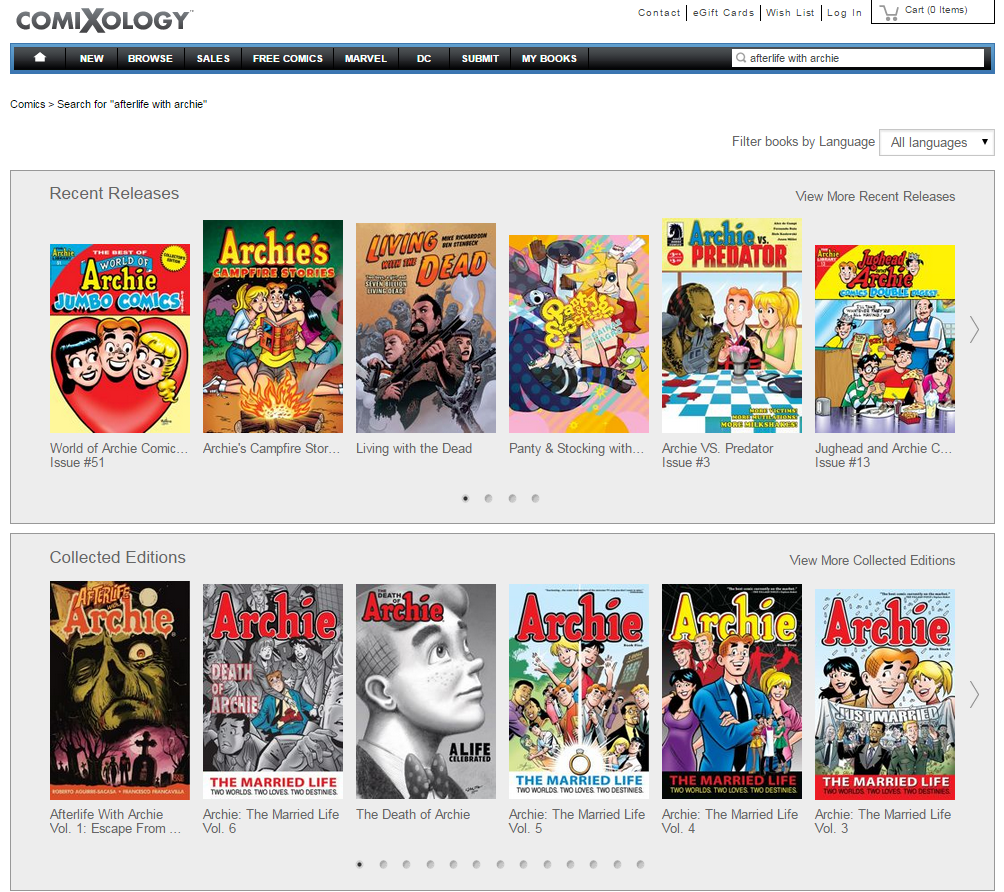 Those are the top twelve hits and only *one* of them is at all correct.  Now, if I scroll down (on my 21″ inch screen), I can actually see the “Issues” section and there, in fact, are the most recent issues of Afterlife with Archie for me to look over.

But let’s say I’m someone who really is new to comics.  I’m at the computer by myself and I vaguely remember my friend at work telling me that there was this Archie comic where Jughead gets eaten by a zombie and I watch Walking Dead on TV and I used to love reading Archie comics as a kid.  So I go to Comixology and I put in “Archie Zombies.”  Here’s what I get: 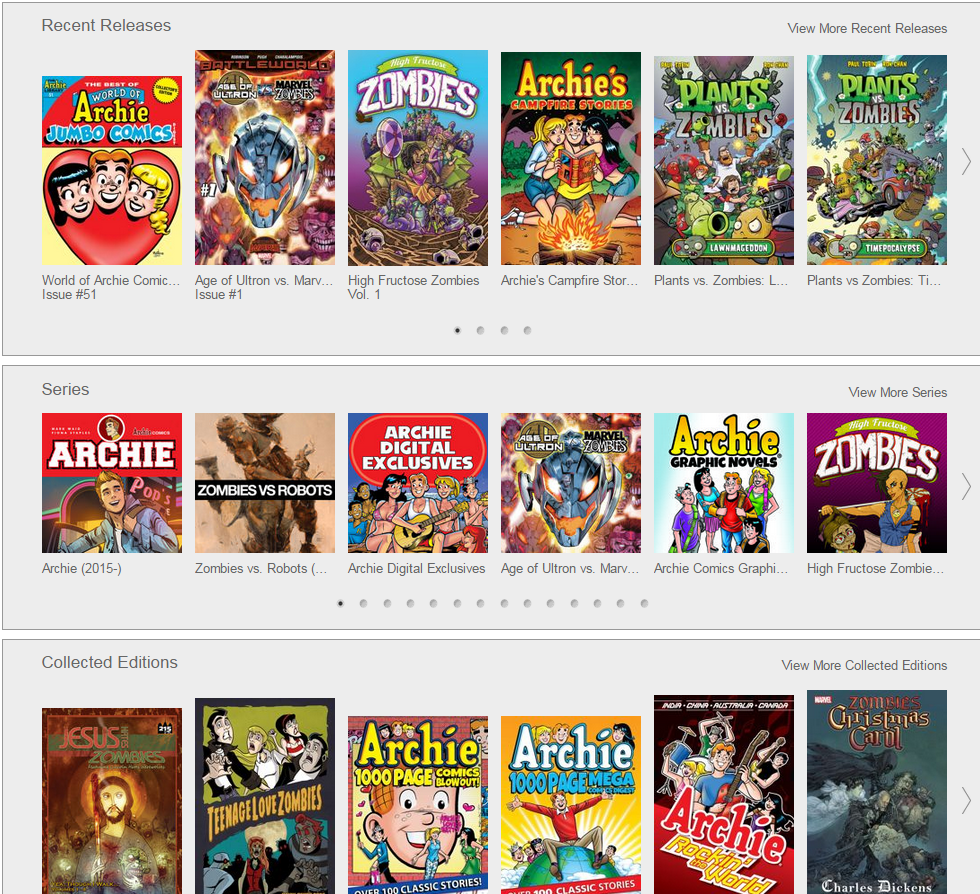 Those are not great results.  Call me spoiled, but I expect better search results from a store selling me stuff than that. In fact, if I go to Amazon—you know, the company that owns Comixology—and search on “Archie Zombies,” what do I get? 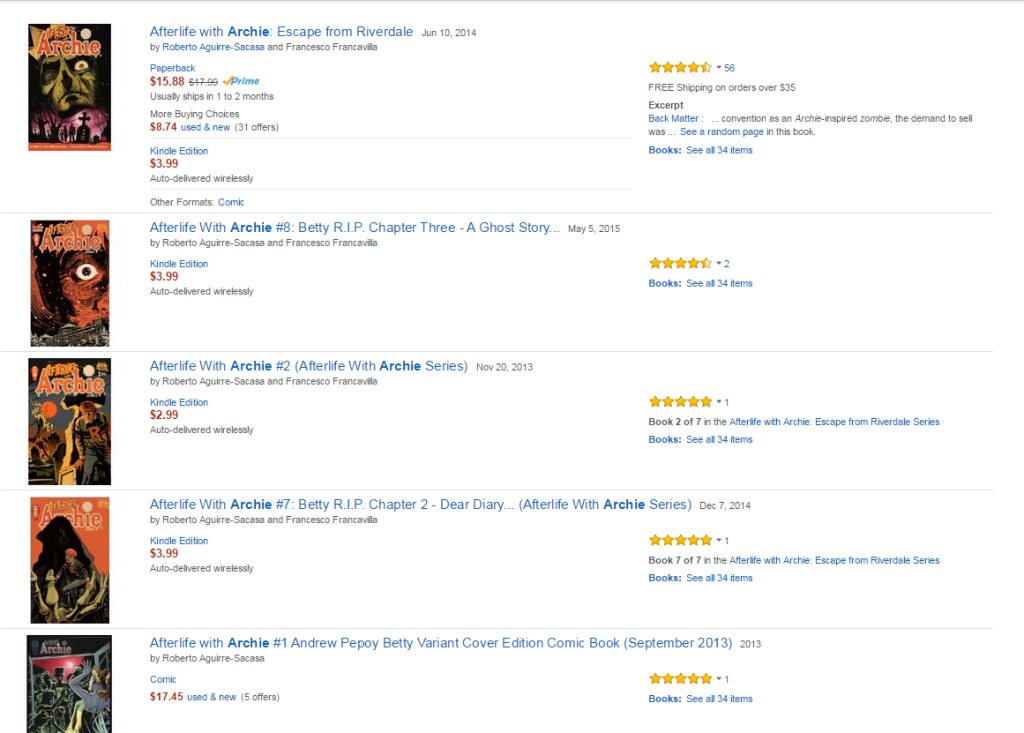 Right? This would’ve been a more helpful search result for my first search than the one I got from Comixology using the actual title.  Check out what happens when I search on “Allison [sic] Bechdel” in Comixology: 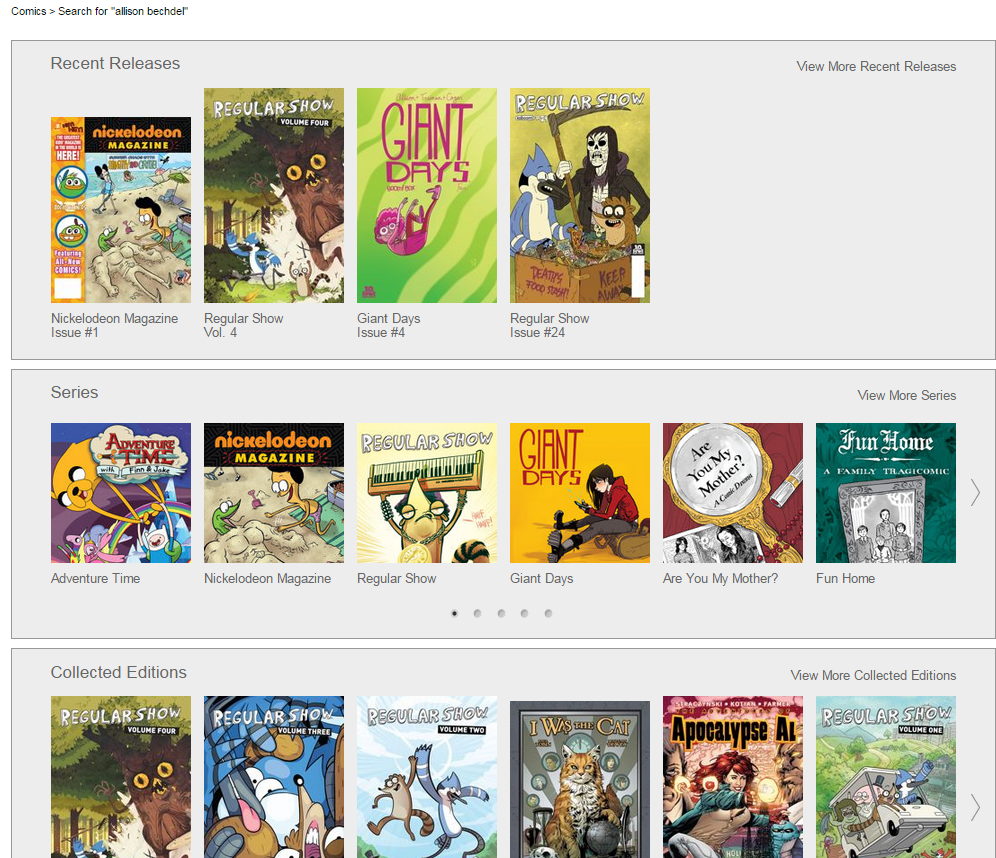 and here on Amazon: 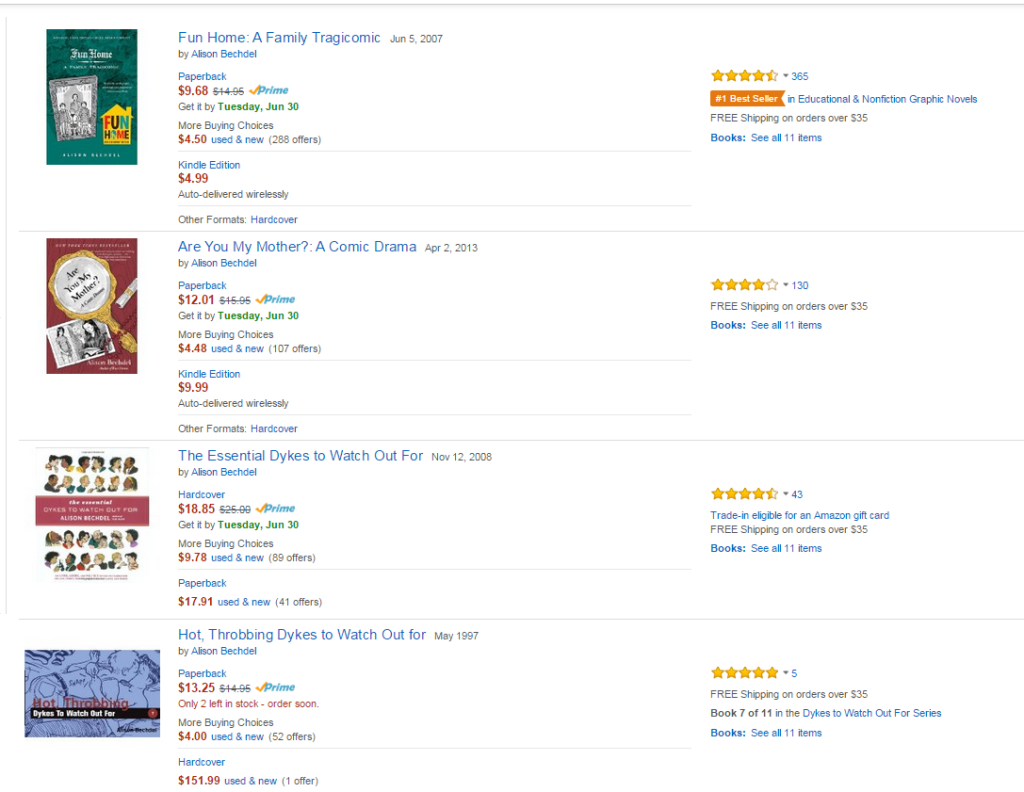 Oh, sure, Comixology is great when you went to discover the work of other comic creators with the same first name—you can’t take that away from Comixology, no sir—but Amazon actually gives me more of Bechdel’s books.

Especially galling is that “Recent Releases” tier always being at the top.  I mean, look at the “recent results” for someone like Jim Woodring:

and tell me that’s not the digital equivalent of going into a really terrible comic book store and having the clerk say, “Never heard of the guy.”   To be fair, Woodring actually is in the Aliens Omnibus and he has an accurate creator section right below the Recent Releases and right below that is an issues section that features both Fran and Congress of the Animals.

But new customers don’t think in terms of “Recent Releases.” New customers aren’t going to understand why when they ask for “Batman #1,” they get this: 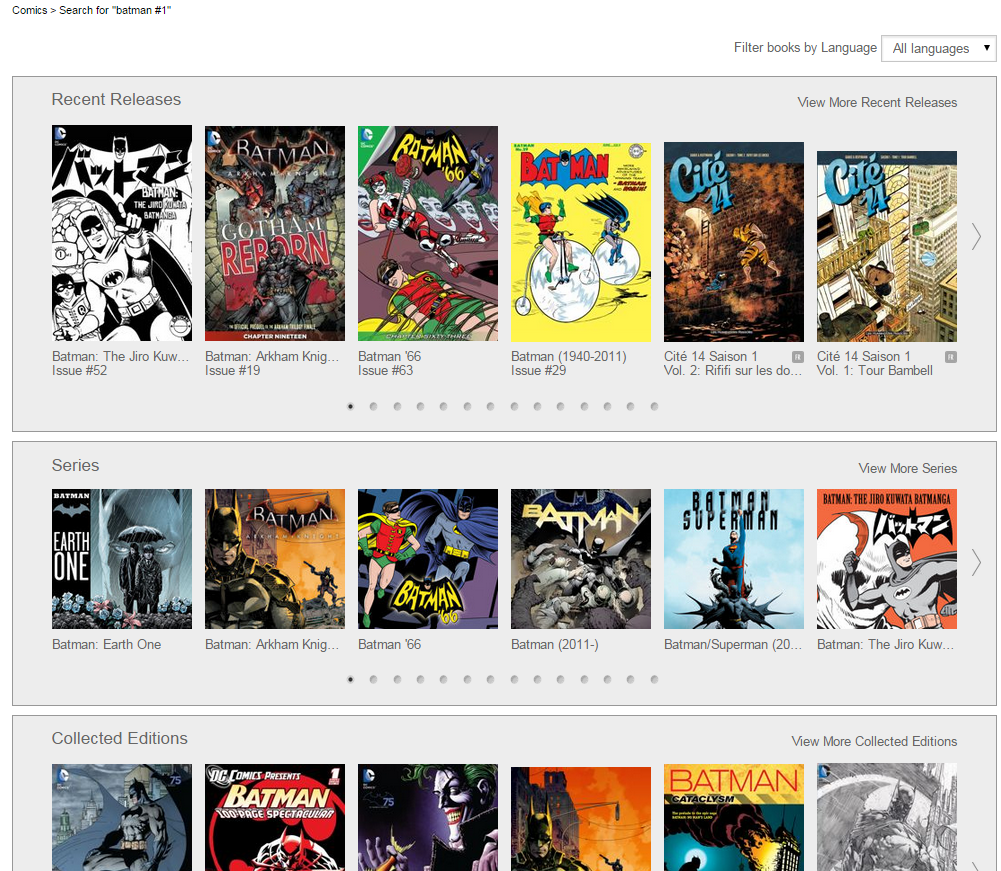 or if they are hardy enough to scroll all the way down to issues, their choices appear to be this: 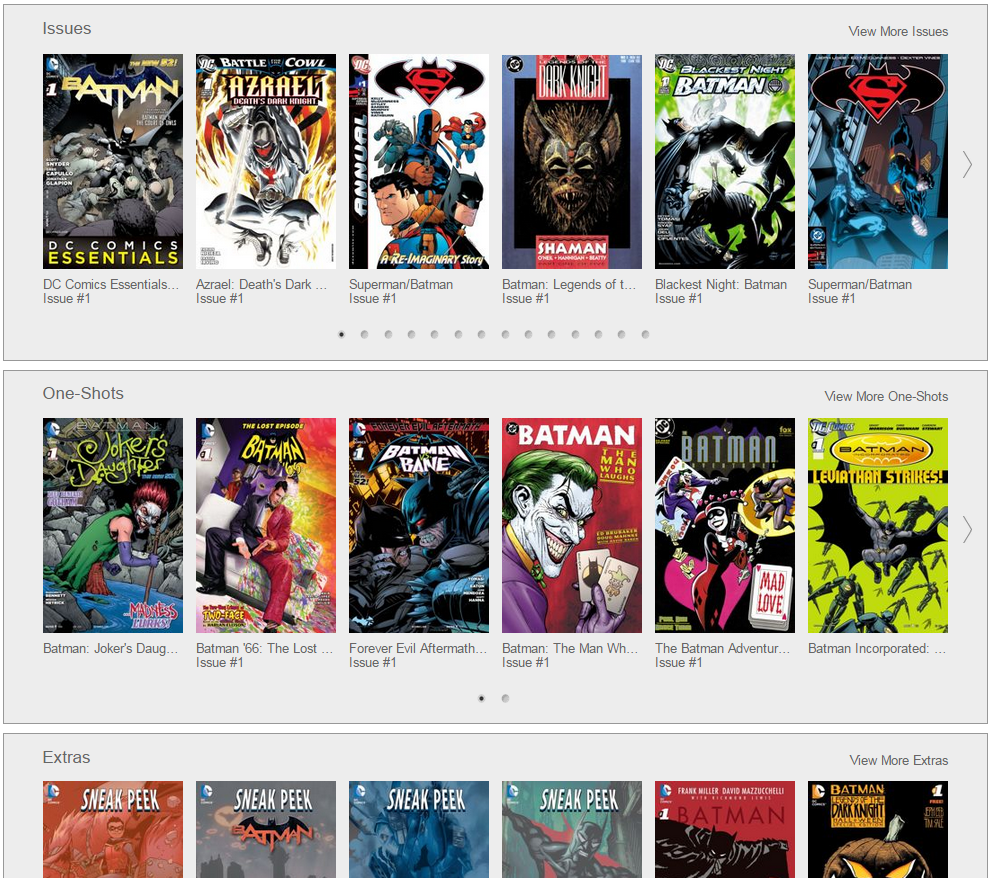 This is why I find the idea of Comixology’s social media platform odious: because at the core of it, the best care scenario is they are hoping you, the consumer, will create a list that will help someone who wants to find the most applicable Batman #1 for their needs. And in return for you doing their work, you’ll get a tier of exclamation points to rise through, so that at the top you can claim that you are the service’s number one Excelsi-lister! (Or whatever.)

So, yeah.  If I ruled the world (and by the world, I mean Comixology), I would do a bunch of things before even thinking about integrating a social media network that allows me to share my pull list with Graeme and you and Amazon.  I would fix the search engine.  I would fix site navigation so that things like sales don’t have two different appearances, depending on if you click on the banner on the main page of the sale on the sale page. I would use Amazon’s powerhouse search results (already built from the refinement of many, many people searching for graphic novels or comic artists they’re barely aware of) and—this is where things get crazy—I would integrate with Amazon to sell people comics that aren’t available digitally.

See my example above with Alison Bechdel? Part of the reason why Comixology gives so many false results is that Alison Bechdel only has Fun Home and Are You My Mother available digitally, whereas Amazon has print copies available of the Dykes to Watch Out For companions.

But Comixology is Amazon: with a little bit of finessing, Comixology can go from being the biggest distributor of digital comics on the Internet, and become the biggest distributor of comics and graphic novels period.  It would require a bit of explaining—’this title is not available digitally, but we can ship you a physical copy of the book in two days if you click “here'”—but it’s a way to take one of the few media that’s held its own against the proliferation of digital and use that to Comixology’s advantage.

I wouldn’t stop there, of course: in order to make that experience really work, you would have to hire writers about comics who could curate the experience, so that people who came for Fun Home can find out about Howard Cruse’s Stuck Rubber Baby or Roz Chast’s Can’t We Talk About Something More Pleasant or Ariel Schrag’s Definition or undoubtedly better books than what I just thought of in less than two minutes.  (I do think what I came up is still better than Comixology’s “Recent Results” which include “The Super Wizard Returns, Chapter One” and “Mass Effect, Vol. 4.”)

It’s a big jump and not without a lot of challenges (and a lot of money).  But do I think it will help the company much more than “Rate All The Robins From Best to Worst” polls and “comixx that kick axx” lists.  Maybe I’m wrong.

Maybe, if we’re lucky, Rich’s rumor is wrong and Comixology 4.0 just includes greater sharing tools of comic panels to social media like Facebook and Twitter, making this one of the more absurd thought experiments you’ve ever read (most of).

Either way, I hope we get Comixology to be more proactive with its powerful position within the comics industry and not engage in the passive, third-best “hey, we’re sponsoring the bar at ComicsPro! Bud and Bud Limes are on us!” approach to sales and distribution the industry has been mired in for so long.

14 comments on “If I Ruled The World: Jeff Ponders the Comixology 4.0 Rumors….”