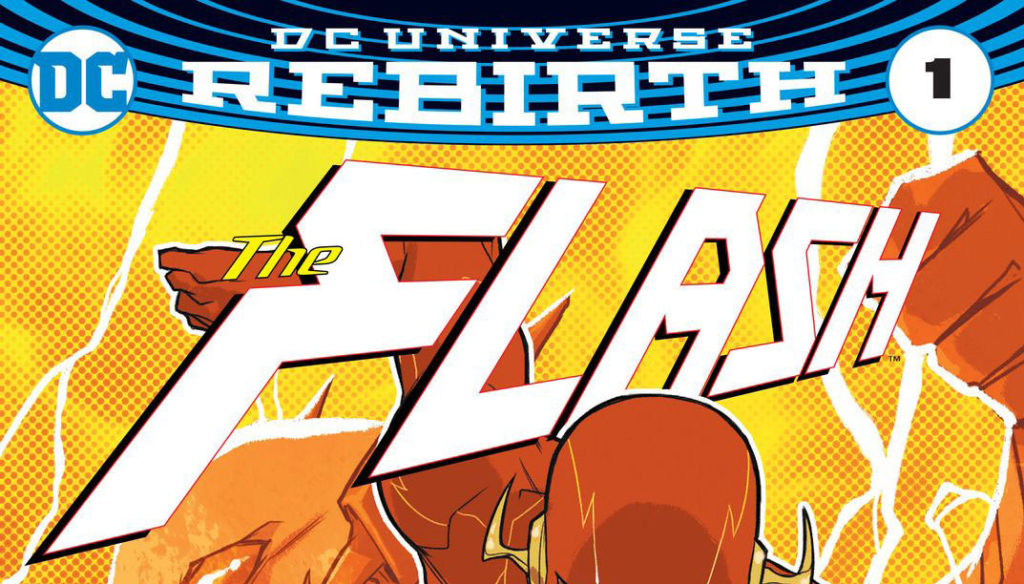 In our Roundtable here about the initial DC Rebirth one-shot (just six months ago! were we ever so innocent?!?), I mentioned that the Flash is my favorite DC character, specifically the Wally West version, especially as written by Mark Waid. This is dangerous, from a reading standpoint, because it means that I have a real tendency toward that visceral #NotMyFlash reaction to other, non-Waid and/or non-Wally Flash stories. That makes for some bad criticism.

Which is a problem, here, because this run of the Flash really doesn’t click for me at all. So, below, I will endeavor to detail why not, without allowing myself to fall back on the crutch of “I am an old babyman and this is not the Flash I remember, waahhhhhhhhhhhh!” Hopefully I have the necessary skill and discipline. Let’s see!

(Spoilers for the these issues of The Flash, below.)

Without further ado: Things That Are Not Working For Me In The DC Rebirth-era Flash Series (That Are Not The Absence Of “My” Wally West): A Listicle

1) There’s nothing to care about with Barry Allen. No, no, wait — hear me out! I haven’t failed yet! I’m not complaining that Barry is not Wally, I’m complaining because I have literally no sense of who Barry is. The Barry that I knew, like three universes ago, was largely defined by being a little older, a little squarer than most of the heroes. He was a duty-bound professional, and he was boring as hell. (This includes the version that Geoff Johns brought back to life in Flash: Rebirth back in 2010, not just the pre-Crisis version.) This Barry owes a bit more to the TV show’s Barry Allen — a little younger, a little more Spider-Man in the DNA — but he’s still got the kid sidekick, which sits oddly. (Two of them, now.)

But the series launched seeming to assume that we would know/care/understand about this iteration of Barry, and I just don’t.

2) Oh boy, another speed villain! Okay, the name Godspeed is amazing for a Flash bad guy. I’ll give them that. But beyond a clever moniker, there’s just nothing here that feels clever. There’s a reason that the Flash’s primary rogues gallery doesn’t contain any speedsters, and that’s because watching two guys zip around each other as blurs of crackling lightning is DULL, whether in motion (as in CW’s The Flash, especially this past season) or in the comics.

(Before anyone “um, actually”s me–yes, there have been occasional excellent speedster-on-speedster battles, no doubt, most of them written by Grant Morrison. But they’re best as exceptions, not as the only thing we see.)

3) And more Speed Force, too?!? Dear lord. The Speed Force, not unlike the Force Force, is better the less foregrounded it is. Don’t make me think about the Speed Force, because it doesn’t make a lick of sense, and if you do make me think about, make sure that you describe it in a way that doesn’t make a lick of sense. I like the Speed Force a lot when it’s just this quasi-mystical thing for the sage-like character in any given Flash story (Max Mercury, Jay Garrick, the ghost of Johnny Quick, Quicksilver, whoever) to vaguely hint at. Once people start quantifying it and visiting it like it’s some kind of a convenience store, it loses something. It’s the midichlorians all over again. Focusing all your stories on speed villains and the Speed Force is like if Spider-Man fought nothing but irradiated spiders every issue. Just let it become part of the background.

4) Nothing in this book has any weight. Everyone in Central City gets speed powers, and there seems to be virtually no societal change–or, rather, what change there is relies on superhero tropes, not actual human reactions. (Lots of training scenes and “who is going to be a super hero?!?” and so on, and very little in the way of looking at how this would actually affect a city.) People die, and there’s very little emotional resonance. Barry gets a new girlfriend and it feels totally unearned, a weightless relationship, then she gets vanished one issue later and we’re meant to take it as a dramatic loss for the character.

Maybe the synecdoche for this, in the book itself, is when Barry talks about seeing Jay Garrick’s hat while stuck in the Speed Force: “I saw something in the Speed Force I don’t think I was supposed to see. I don’t what it was but … it filled me with HOPE.” It’s like trying to give something in a story emotional weight and heft by saying “This is an item with emotional weight and heft.” It doesn’t work.

5) The art is all over the place. I presume Di Giandomenico is supposed to be the “primary” artist, and he’s perfectly good. There’s something a little busy in his linework that reminds me of a Scott Kolins or Adam Pollina, which I don’t totally love, and it’s compounded by the idiotic lightning effects they want to cover Barry with all the time. But he conveys motion well, and there’s some dynamism to his action scenes, and overall he’s a perfectly solid artist for the book. But, not particularly surprisingly, he can’t keep up with the almost bi-weekly pace here, so we get a rotating cast of other artists. Googe is stylistically the most similar, and definitely the strongest of the other artists. Watanabe is an unremarkable house-style guy, while Corona is working in a stylized idiom not unlike Ian Gibson. Individually, any of the four could probably function as the book’s artist, but with all of them chipping in, it is … awkward, at best, and tough to follow across issues at worst.

6) Not everything has to match the TV show, guys. You can feel the framework of the whole thing creaking as they try to shift it into alignment with the CW’s hit show: younger Barry, a black Wally West as a sidekick, the speed-themed villains, even Jay Garrick’s hat hanging out in a portal somewhere. This almost never works, back to Batman ’66 and probably farther–just let the comics be the comics and the show be the (vastly superior, far more entertaining) show.

(And, to be VERY clear, I have no problem with a black Wally West, or with any other race-swapped or gender-swapped characters. And, more to the point, I applaud the increased focus on inclusion in comics. That’s all good stuff. This specific instance is just part of a larger problem the book has that reads as jealousy of its more successful sibling.)

So…. how would I fix the book? I’m not really sure. I think I’d slow it down a bit (pun initially not intended but now totally deliberate). Give relationships time to develop. Show me who this Barry is, and get me to root for him. Give Central City some character, and make it important. (The introduction of the Shade in issue #10 makes it clear that Williamson has read Starman; take some cues from the use of Opal there.) Build up a villain who has nothing to do with speed, who challenges Barry on another level entirely. Basically, leave the mythology alone for a bit and build up the actually status quo.

OR JUST BRING ME BACK MY WALLY WEST AS THE FLASH AND WRITE ABOUT HIM. SO THERE. [sounds of creepy, baby-like crying]