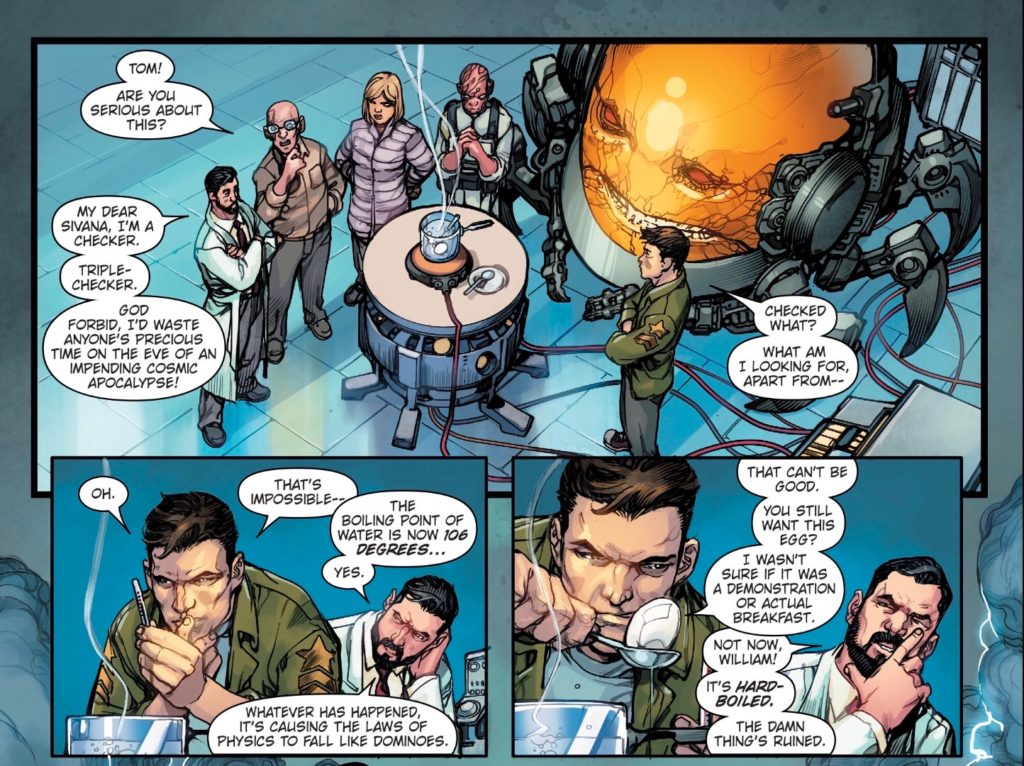 http://theworkingdraft.com/media/podcasts2/WaitWhat223.mp3 0:00-51:46: Greetings! Greetings from the first day of the Marvel Legacy announcement, and if you think we’re not going to lean into that piece of news, well, I suggest you listen to our other…

0:00-7:32: Greetings from a very relaxed Graeme McMillan and a perhaps somewhat less relaxed Jeff Lester.  But, relaxed though they may be, they are still reading some of the books they discussed last week:  Graeme is still making his way through Hostage by Guy Delisle, and Jeff is still making his way through (deep breath) Abandoned Cars by Tim Lane, Judge Dredd: The Cursed Earth Saga Uncensored by Pat Mills, Mike McMahon and just about everybody, and although he finished vol. 1 of West Coast Avengers by Englehart, Milgrom, and Sinnott, he’s just barely dug into volume 2 (which actually starts seven issues after volume 1.  Boo, Marvel!)

7:32-21:46: The discussion about 2000 A.D. pacing in the 70s leads fittingly into Rob Williams’ current writing on Suicide Squad with art first by Jim Lee and currently by John Romita, Jr. (and a plethora of artists for each issue’s back-up strips, such as Eddy Barrows and Eber Ferreria in issue #14).  Also discussed:  the combat banter of Steve Englehart; the use of shtick and the back-up story structure in Suicide Squad; and more.

21:46-29:52:  Jeff was a bit bummed to hear one of his favorite comics, DC’s The Flintstones, is ending after issue #12.  And asking about this is a very fine way to get Graeme to talk about the upcoming DC/Hanna Barbera crossover annuals for which Graeme has read the review copies.  Discussed:  Flintstones/Booster Gold by Mark Russell and Rick Leonardi; the Snagglepuss back-up; the Batman/Top Cat crossover; and more.
29:52-35:28:  This episode was recorded on the day the new Justice League trailer was released (see above), so it made sense to transition from talking about the latest DC comics to DC’s latest attempt to build a franchise.  What’d we think?

35:28-59:47: And from the DC movie trailer, to the latest Marvel (non-Marvel Studios) movie, Logan.  Please note this is a full spoilers discussion—pretty much every bit of it gets spoiled so stay away from this section if you still haven’t seen it.
59:47-1:02:46: From there we pivot to discusss…the other Wait, What? podcast! (Wait, what?) We are many, and we contain multitudes, apparently?
1:02:46-1:12:12: And hey, here we are discussing this Marvel retailer conference thing that’s happening kinda/sorta of the downlow.  Jeff is wondering what Graeme has heard about, and if he thinks the Marvel Leopard can change its spots.
1:12:12-1:23:11:  What should’ve been a discussion on what Graeme’s reading becomes a longer discussion about Tom King’s Batman—Graeme is enjoying it tremendously, but Jeff is so far behind, will he ever catch up? And if so, how?

1:23:11-1:35:50: Graeme is also very impressed with what Joshua Williamson (with a raft of artists such as Carmine Di Giandomenico, Jesus Merino, and others) is doing to reinvent Barry Allen for The Flash, by taking the TV Barry Allen and doing an even better job with it. And that gets us into a discussion of characters that we care enough about that we’ll check out no matter who is on the title.
1:35:50-1:57:08: Graeme had linked to an article on Medium by Meg Downey about fanfic and although Jeff still hasn’t read the piece (he fav’d it for later), we discuss a bit about fanfic’s ability to give audiences what they want on certain properties better than the corporate owners of the properties. And then there’s some more talk from Jeff about Englehart and West Coast Avengers because, hey, who can stop him?

1:57:08-2:02:05: Also, thanks to another A+ manga recommendation from a Whatnaut, Jeff just finished the first volume of Interviews with Monster Girls by Petos, and wants to talk about it.

2:02:05-2:09:43: And Graeme wants to talk a bit about Terms and Conditions by R. Sikoryak which he is, uh, coolish about. He also wants to discuss Boundless by Jillian Tomaki, which he loves. And then…
2:09:43-: Closing Comments!  Look for us on  Stitcher!Itunes! Twitter together and separately: Graeme and Jeff! Matt! Tumblr,  and  on Patreon where a wonderful group of people make this all possible, including the kind crew at American Ninth Art Studios and Empress Audrey, Queen of the Galaxy, to whom we are especially grateful for their continuing support of this podcast. Oh, but before we go, Jeff has a theory about the Cursed Earth Saga, a certain creation of Pat Mills, and a certain creation of Jack Kirby.

Next week:  A skip week!  And then in two weeks, a Baxter Building!

Continuing my efforts to plow through the insane backlog of DC Rebirth books I’ve accumulated. Today: Flash #3-10 (I actually thought I had read through #11 but can’t find it anywhere), written by Joshua Williamson; drawn by Carmine…