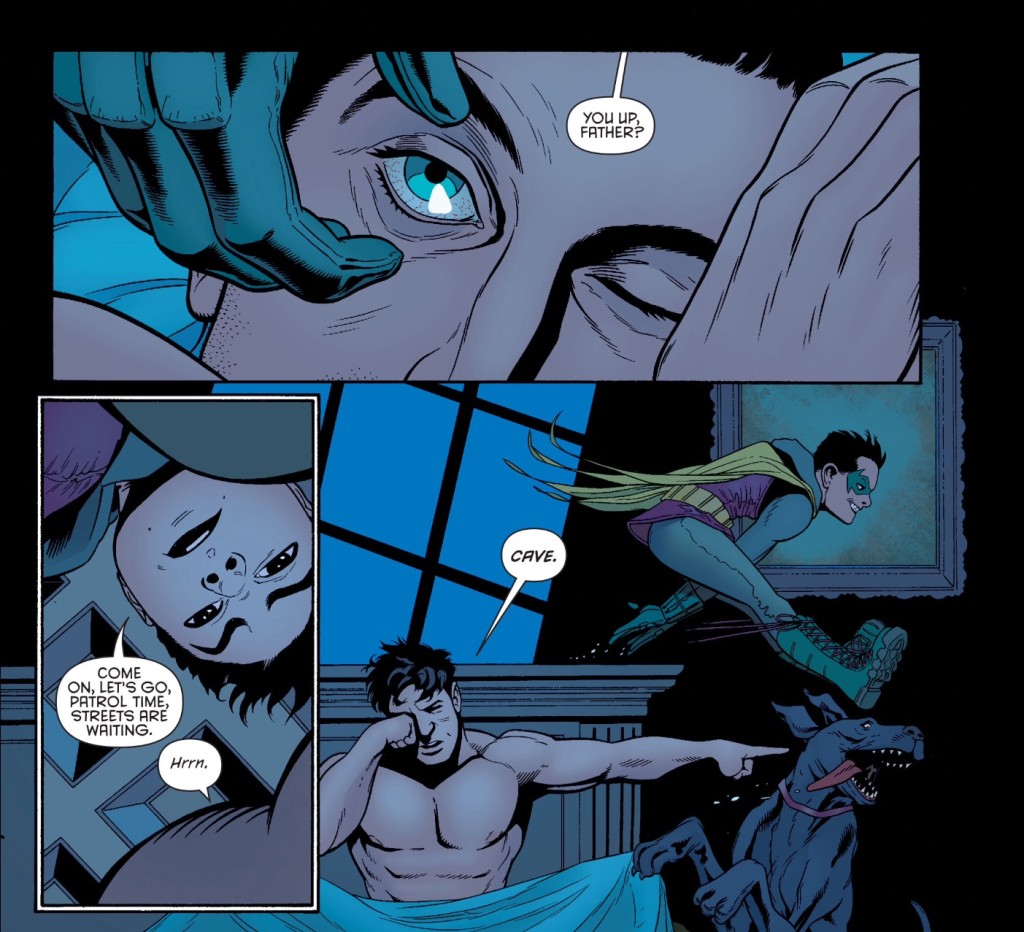 fun in three panels or less

After spending last week writing about a guilty pleasure, it’s fun to turn around this week and confess how much I enjoyed this latest issue of Batman & Robin by Peter Tomasi, Patrick Gleason, Mick Gray, and John Kalisz.

Because this is the kind of book I would’ve been tempted to describe as a guilty pleasure a few years back, though maybe only for the most mistaken of reasons.  After all, calling something a “guilty pleasure” is to acknowledge upfront its shortcomings, even if only in the public opinion. And there’s something about this book that continues to make me uncomfortable about recommending it or appreciating it, even while reading this, the best issue of the title I’ve read in a while and probably the book I enjoyed reading the most out of the (counts on fingers and toes) eighteen comics I’ve read today.

[More after the jump, because there’s Graeme and Baxter Building below and you should miss neither, yeah?]

In case you’re following neither the title nor the trail of scat DC marketing has been laying down, this issue features Damian back in play and possessing Superman-like powers.  (Witness that cover where Damian is pulling off his schoolboy clothes, revealing his costume underneath, as bullets bounce off his chest.)  In a way, Tomasi has taken Grant Morrison’s original conceit for his run on Batman and Robin—”What if Batman was the nice guy, and Robin was the mean, dark one?:—and spun it:  “What if Batman was Batman, and Robin was Superman?”

Or, at least, that’s how it comes off in this issue, where Damian faces down a gunman wielding twin assault weapons by walking through the hail of bullets, breaking the guns with his bare hands, then slamming the man between two cars, Hulk-to-Loki style. 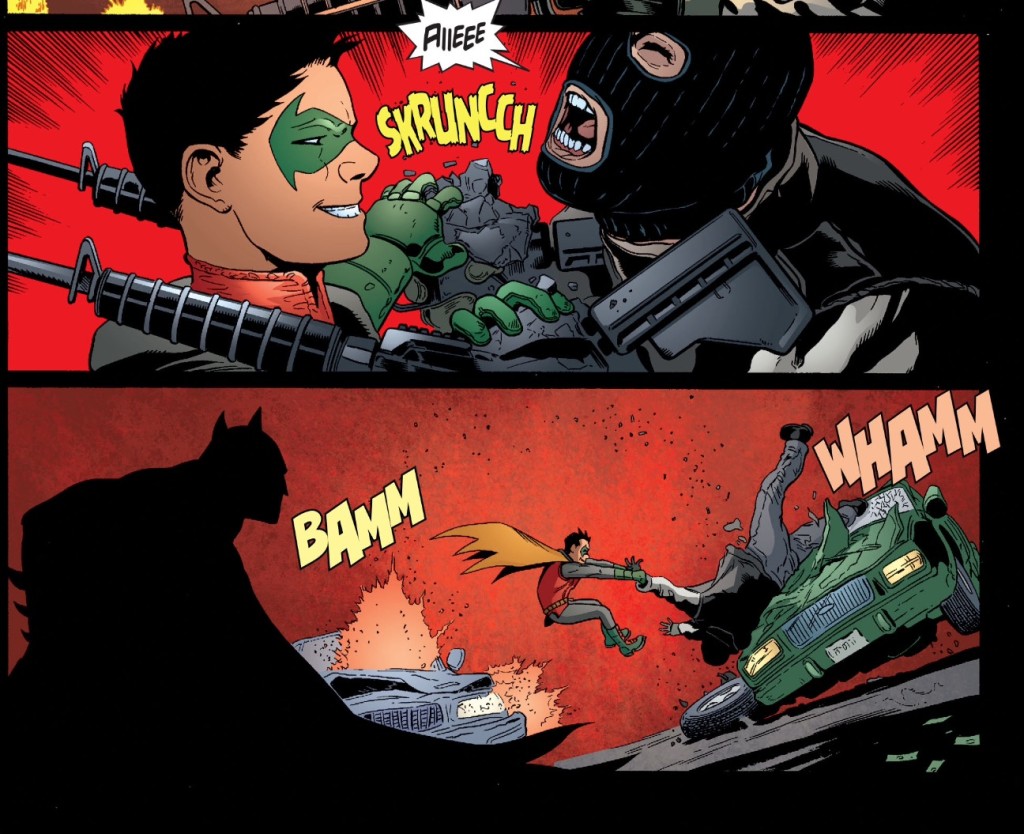 To follow up, he leaps up from a bad dream and puts his head through the ceiling, flies through a cloud cover at night to emerge before the full moon (and release firefly), swims to Atlantis to ask a favor of Aquaman, and more.

In short, it’s classic Superman shenanigans made truly enjoyable by the art of Gleason and Gray, Tomasi’s willingness to let that art do the talking, and the way  this stuff gets to feel fresh again.  Or maybe it doesn’t feel fresh, and I’m too old to notice?  Because I’d be way down with a Superman book that relies on comedy—Alfred’s room is right above Damian’s, apparently and is utterly unphased by the kid popping out of the ground brushing the flooring out of his hair—and super-powered scenes that have a sense of wonder to them than what we’re getting now.  In short, I’ve now hit that stage where Superman: The Motion Picture is maybe the version of Superman I most want to see—which I find suspicious since I actually spent too much of that movie waiting for him to hit someone.

In fact, I’d think the adventures of Batman and Super-Powered Robin would have a lot of traction in the all-ages market, the kind of thing that would scale nicely to sit next to Darth Vader and Son.  But even just here, in a Teens+ comic, having this scrawny little kid fly, or dive through the deep, or break weapons in his fist, is a gas, a triumph of cartooning (although it’s the kind of casual triumph good cartooning makes look easy).

It being Tomasi and Gleason, there’s any number of “hold up” moments. Gleason and Gray are extraordinary at disturbing imagery  (in some alternate universe, their comic Wytches with Scott Snyder is one of alternate-Jeff’s very favorite books) and that gets cranked way up with a creepily brutal nightmare Damian has in the second third of the book. It’s gorgeous to look at, but not something I’d feel comfortable passing along to a pre-teen. 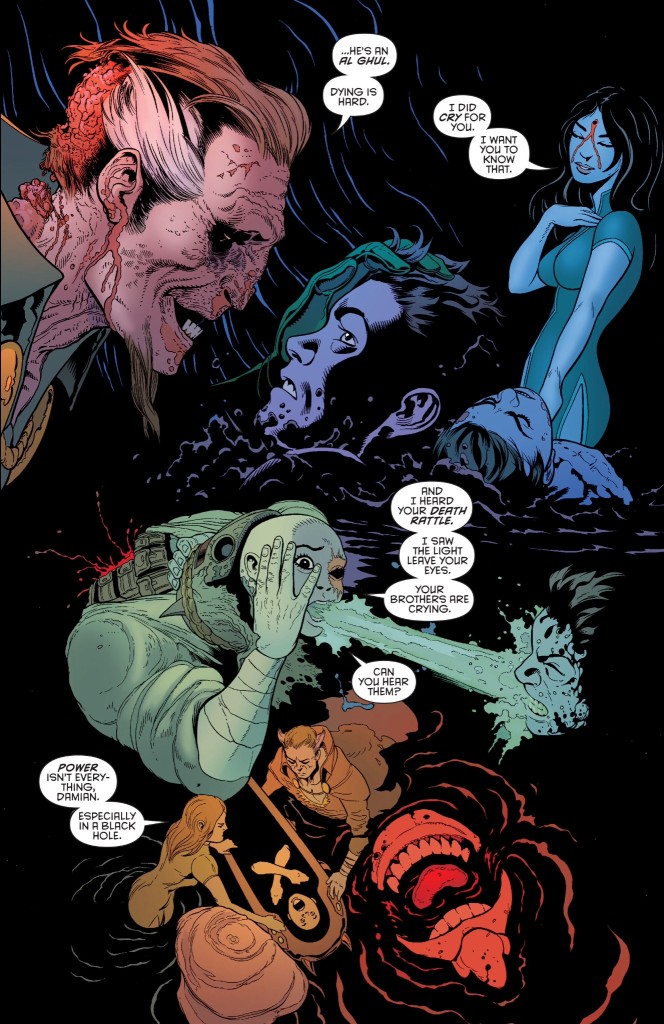 Creepy but awesome (but creepy)

And even as we have Damian do any number of superheroic good deeds, his face is more-than-occasionally framed in shadow.  The direction superhero comics—and most especially DC superhero books—have gone in the last few decades, it seems more than likely this is the first act to a superpowered spin on “The Monkey’s Paw,” where Batman finally groks what was apparent to anyone who watched even just the trailer for Pet Sematary: sometimes dead is better. (Hopefully, it’ll also tempt Batman into checking out Mary Lambert’s IMDB entry because that woman has had one cuh-rayzee career.)

On paper, a showdown between Batman and a superpowered enemy who knows all his secrets  and is also his son seems like can’t-miss material, the kind of over-the-top story superhero comics can do best, pushing some of the Oedipal tension inherent in the Batman mythos past subtext to plain ol’ painful text.  As a guy who really, really, really wanted Hush to be Jason Todd, there’s more than a small part of me that would be down for that.

But there’s also part of me that’s kinda tired of how violently superhero books cling to their status quo.  Bringing Damian back with superpowers right out of the gate suggests that it may not even be a year before the schism between Batman and Robin becomes a mega-event, where the charm of a flying kid hovering with fireflies is crowded out by “The Battle for the Batcave” or the “Father’s Day Massacre” or whatever charming event name they’ll go with.

Whatever happens, hopefully I’ll get at least an issue or two more of this, because I enjoyed this a lot, more than enough to fret about where it’s going, and how it’ll end.  Knowing my proclivities for needless worrying, you should at least listen to the recommendation and ignore the rest, and check it out. 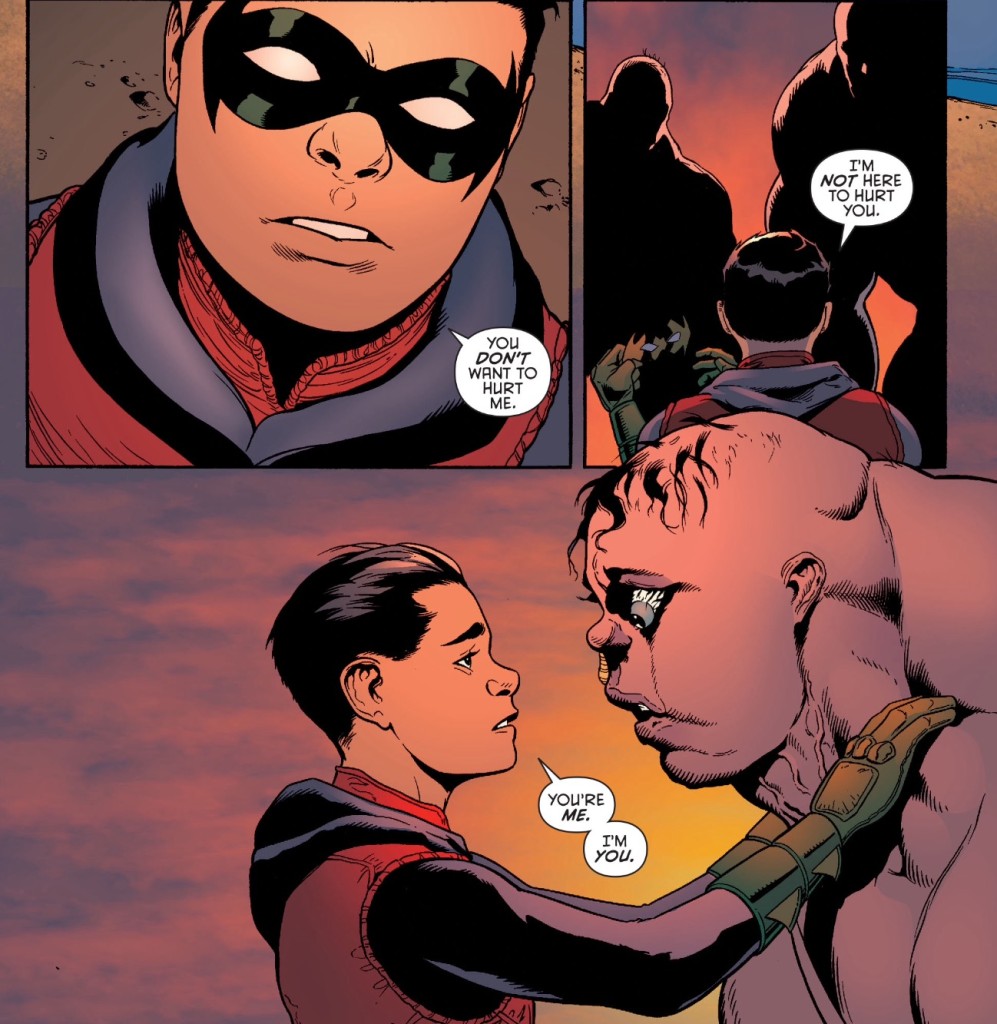 No real reason to include this here; I just dig the art.