Reading Bitch Planet #2 and Casanova: Acedia #1 this weekend, I kept returning to an idea that I’ve mentioned more than once on the podcast — my belief that, often, I’m more at fault than the material when something doesn’t work for me. (More after the cut, because there’s a new episode of the podcast in the post below.)

I was disappointed by the first issue of Bitch Planet, which felt too thin, based around a last-minute surprise that wasn’t in any way surprising, and suffering from the problem of not containing all the information that the writer — all too familiar with the material — thinks it does (The concept of “non-compliance” was more coherently introduced in interviews for the book than the book itself, which is always a problem). The second issue is better, if still disappointing, but the ways in which it falls short made me wonder if I was the problem, rather than the comic itself.

For example — the structure is wildly uneven, with the series feeling as if it’s either taking too long to get to the point (Is the first storyline about a sports team out for revenge against those who run the system that jailed them? If so, that’s only introduced midway through this second issue, which feels far too late) or has problems focusing on what’s actually important at all. (Or, to put it another way, what’s the point of the opening sequence in this second issue, beyond introducing mustache twirling bad guys?) It’s impressively unoriginal, and at this point in the series, seemingly disinterested in doing anything new with the familiar concepts. The dialogue is more interested in exposition than character, yet the exposition doesn’t really inform in any meaningful way about the world around the characters; it’s either plot-specific or relatively generic technobabble. All of this, for me, makes the book frustrating — I want it to be better! — and unfulfilling.

And yet, I look at the plaudits the first issue got, and I wonder if I’m simply looking for the wrong things. For example, maybe I’m not properly immersed in the genre expectations of the prison exploitation setting, where the pacing and the dialogue would feel authentic. Maybe the wandering focus is a plus for an audience looking for more expansive world building than plot momentum right now. Perhaps just the high concept of the series is enough to allow people to forgive shortcomings, because, goddammit, there’s no denying that mainstream comics needs a stronger feminist voice these days.

In other words, maybe I’m reading it wrong.

(This is when I have to admit that I finished Bitch Planet #2 realizing that I like everything about it bar the writing in the main story. Valentine De Landro’s art is blocky but pleasant, filled with some nice visual gags and an interesting sense of pacing; Cris Peter’s colors are great in this second issue, with some really nice stylization that follows the modern pulp of Rian Hughes’ covers. And I love the back matter, and the fact that there’s a monthly comic out there that offers feminist essays in the back at all. I want to love this comic, and I find myself getting mad with myself that I don’t.)

Casanova: Acedia gave me the same feeling, although not in the main story. By this point, I feel familiar enough with what Fraction does with the series that I can roll with those particular punches (For all the talk of “Now Cass is in the real world,” at the end of the last series, there doesn’t feel like a dramatic change in tone — or, for that matter, increase in realism — in this series, which could either be a good or bad thing depending on what you want from Casanova in general). Instead, what made me feel as if I was missing something was Michael Chabon’s back-up feature with Gabriel Ba.

My history with Chabon isn’t as vast as many other people’s; I find him someone who does good interviews and who I should like in theory but always find my attention wandering from in practice. That’s especially true with The Metanauts, the back-up strip that reads more than anything like Chabon doing a Fraction impersonation (or, maybe, Fraction doing a Chabon impersonation? Which might be part of the problem, really) than anything else. It’s… fine, but light and parodic and weirdly mean — or faux mean, even worse — in ways that make it feel inconsequential and unnecessary. Instead of thinking “Hey, lots more comics and by Michael Chabon, too!” I was really thinking “That art by Ba and Cris Peter (again!) is great, but I really miss the old text back matter that used to run in the series.”

But even as I was thinking that, there was a voice in the back of my head telling me that I was likely missing something, that I should wait and see the reviews to find out what everyone else thought — basically, that I shouldn’t trust my own thoughts on the matter, because again, I’m so sure that I’m getting something wrong and shouldn’t trust my own critical faculties.

What should I put this down to? Some innate self-awareness of my lack of taste, or a failure of confidence when it comes to being contrarian? Realizing that I’m missing out on things that are important in ways that I wish I could support more, and wanting to feel closer to that particular cultural zeitgeist? All, or none of the above? I don’t know. All I’m really sure of is that I wonder, sometimes, if there were other, better ways that I could read things. 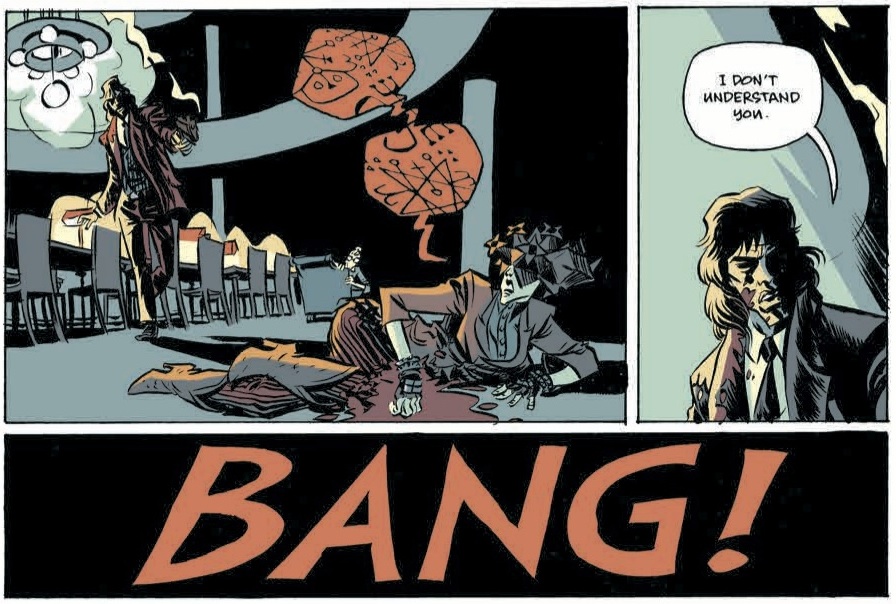 3 comments on “It’s Not You, It’s Me (Probably): Graeme Reads A Couple of Image Books”