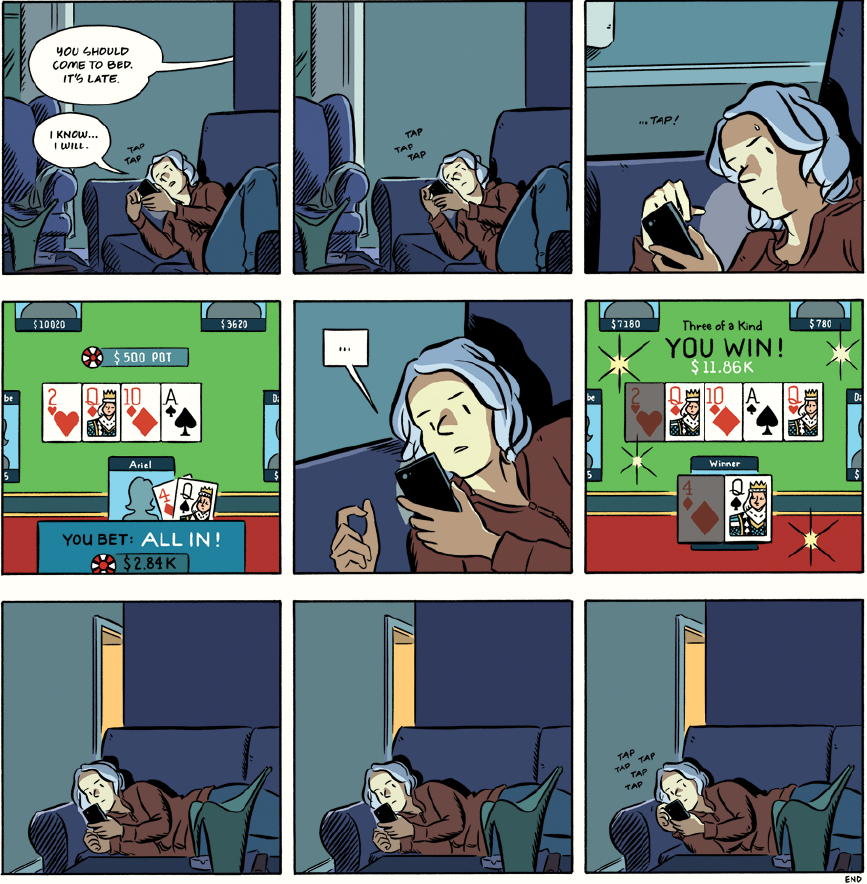 From Pope Hats #4 by Ethan Rilly.

Yes, scheduling.  Not my strong point: if there is one thing everyone can take from my entries, it’s that they are the experiences of a dude jammed into a corner, unable to fully explain how he got there.  So let me just stammer this out before I start in:  I am so squeezed for time that this post is going to go up almost crimin.

POPE HATS #4:  So good, you guys.  Even though cartoonist Ethan Rilly takes a break from his ongoing story of Frances Scarland, struggling law grunt, he did not take a break from bringing the wow: this collection of stories is simultaneously more playful than obvious inspirations Adrian Tomine and Chris Ware (and Dan Clowes, I guess, at least via Tomine) but still remarkably painful, like Kevin Huizenga but with a little more willing to punch you in the kidneys, story-wise. All or most of the stories here about isolation, with an emphasis on those who cannot help but isolate themselves from the culture at large, but Rilly makes it a point to focus on the people around the loners, the ones losing them to dusk and silence. Hopefully, more work is forthcoming soon and I say that both as someone who thinks Rilly’s going to need more work banked before he can get well-deserved wider exposure, and as someone greedy for his comics.  More, please.

OPTIC NERVE #14:  Speaking of Adrian Tomine, I think someone could spend a useful couple hundred words or two talking about the way Tomine’s main story, “Killing and Dying,” subliminally comments on the patterns of situation comedies to argue for, I think, almost all comedy’s inability to really talk about anything important in our lives.  But I say all of that utterly convinced that is me misreading the work and misunderstanding Tomine’s intentions with the story.  It does seem like the kind of dour killjoy move Tomine used to pride himself on, but at the very least he manages to frame this in a way that’s entertaining and engaging (as opposed to the thing I used to slog through because of my sheer love of his cartooning).  Much more impressive to me was the second story (whose name I forget) that could be an interesting comparison and contrast to some of Tomine’s much earlier work:  it feels like a repurposed Raymond Carver short story, but the ongoing influence of Yoshihiro Tatsumi on Tomine gives the work a narrative blankness (I can’t think of any other way to put it but that) I find really compelling.  Tomine’s been having a mid-life renaissance lately, and I’m digging it. 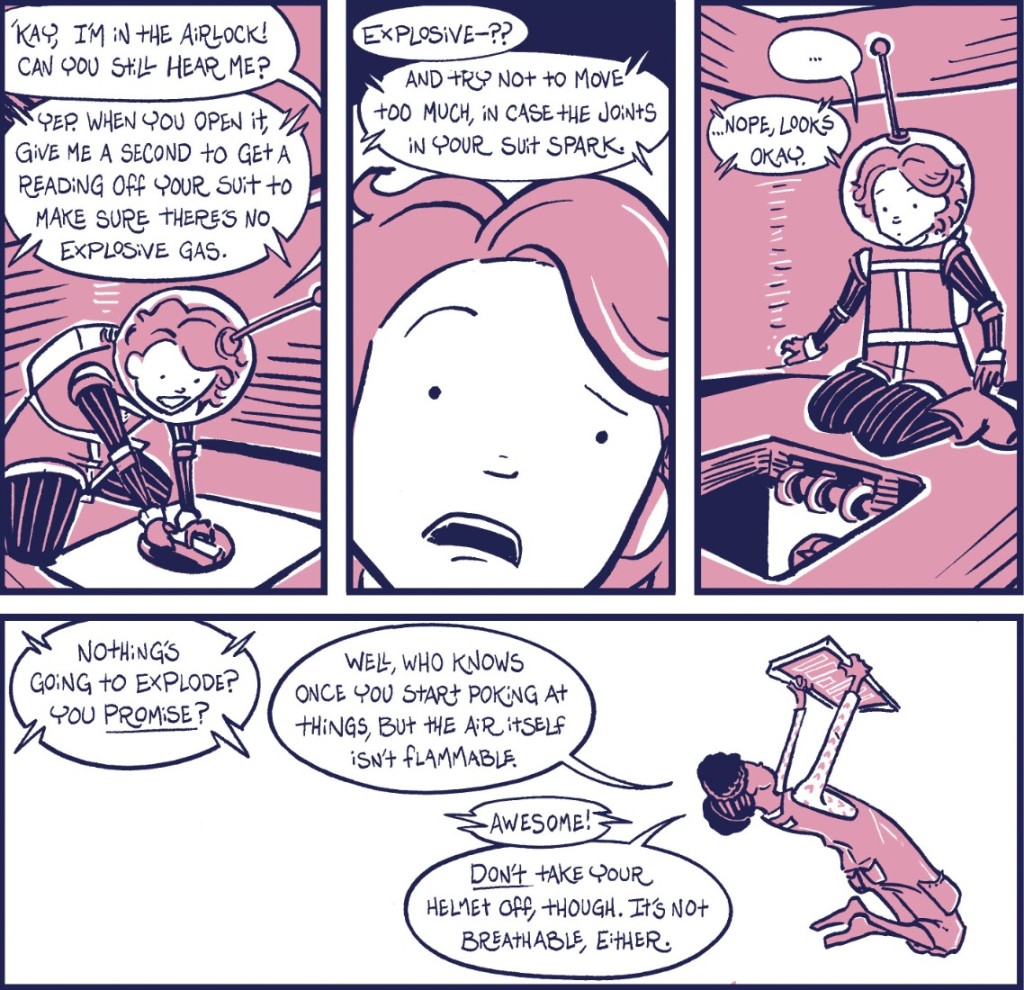 SANITY AND TALLULAH: PLUCKY TEEN GIRL SPACE DETECTIVES #1:  Molly Brown’s engaging book is only .99 through Comixology Submit and it’s a full 32 page done-in-one and I’m glad I picked it up: two newly teens take their spaceship out for a joyride and come across a mysterious ship abandoned in an asteroid belt.  I don’t know if I would call it all-ages exactly as the science fiction elements are a little harder than you would expect, but I think this book would perfect for a precocious kid who likes reading genre.  It’s a little bit like YA Heinlein but with girl protagonists, I guess?  I think that’s a really good thing to have out in the marketplace, and I liked it.  I think there’s an angle from which one could pick at some nits as far as racial representation goes–one of the girls is black, one is white, one gets to figure out all the problems and be a bit of a nag, one gets to be impulsive and have all the fun and guess which one’s which?–but I think that doesn’t lead anywhere quite as productive as some people on the internet might think.  It’s good book and if it’s the kind of thing that sounds appealing to you, you’ll probably like it a lot. 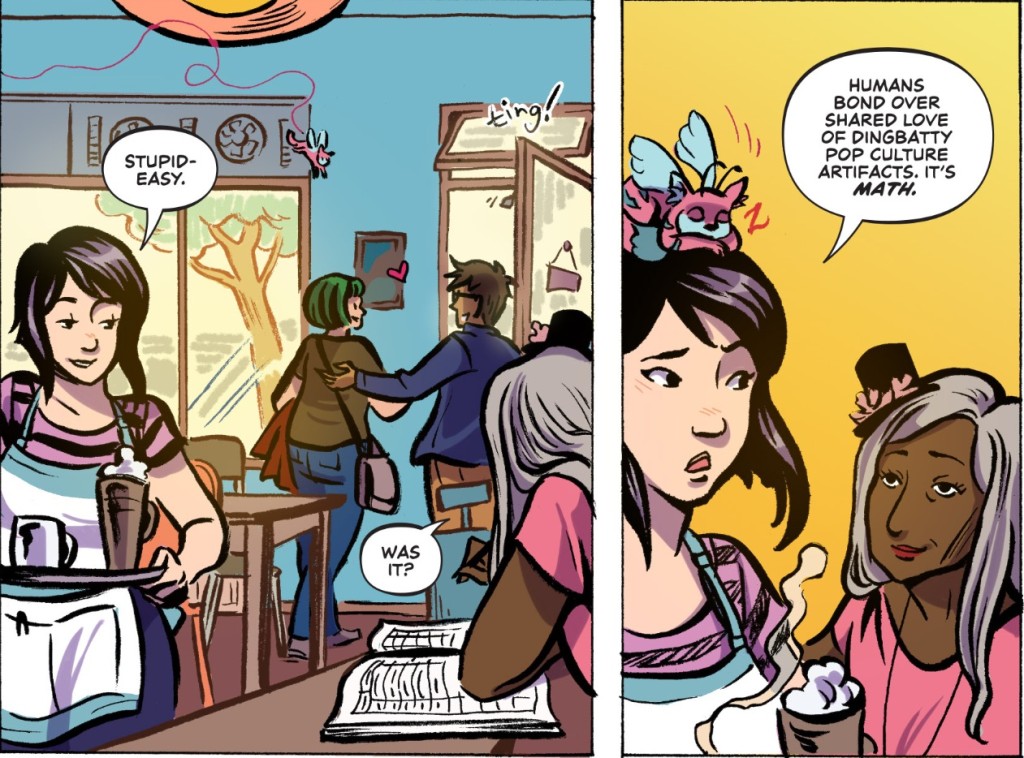 FRESH ROMANCE #1:  Full disclosure:  I’m friends with Sarah Kuhn, and I think she is talented and awesome and I’d take a bullet for her if the caliber was sufficiently small.  So I’ve got more than a small share of bias about this anthology where she writes the third of three ongoing romance stories (with art by Sally Jane Thompson and colors by Savanna Ganucheau), I think her story is hands-down the most entertaining, and oh my god I didn’t even write her to tell her how much I liked it because I’m a terrible friend.  The other stories in the anthology are, for me, a little more problematic: Kate Leeth and Arielle Jovellanos (with colorist Amanda Qcurti) have a story about high school lovers carrying on a charade in public that allows them to conceal the relationships their culture(s) would take issue with, and I thought the installment was exactly as inelegant as this very run-on sentence describing it; and Sarah Vaughn and Sarah Winifred Searle have the opening chapter of a Regency-style romance that is achingly lovely but unfolds a bit too slowly for my tastes.  It’s also a little pricey, the book?  But not only does it have Sarah Kuhn in it and her piece is great, I think $4.99 is becoming the new $3.99 for me: it’s not the make-or-break issue for me it used to be several years ago.  (Maybe because the two all-you-can eat digital services I subscribe to keeps me feeling less like I’m trapped into buying expensive comics to keep reading comics?  Dunno.)  Even if a friend of mine wasn’t in it, I’d still be really glad this was in the marketplace, warts and all. 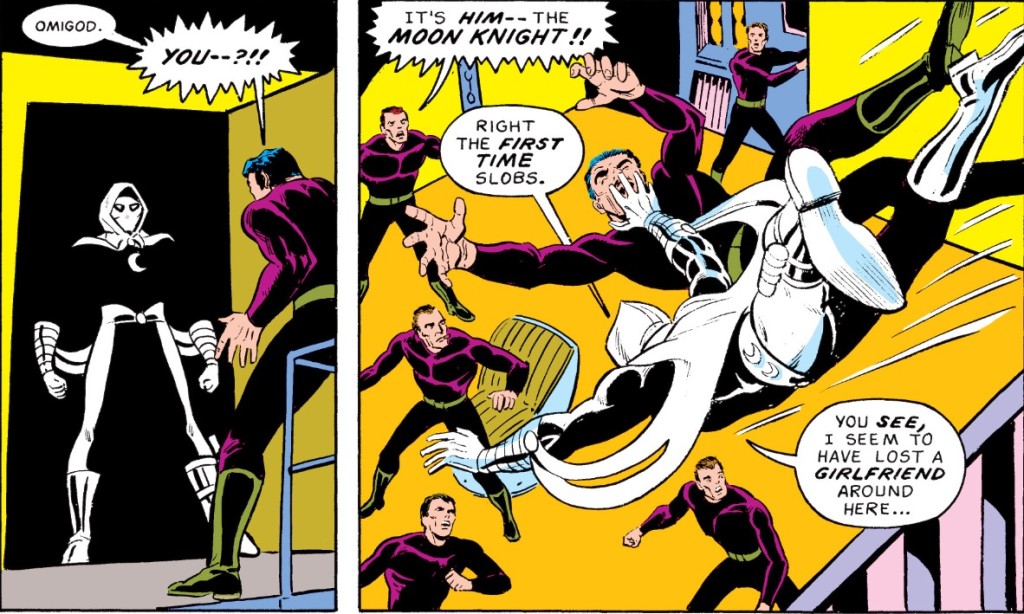 From Marvel Spotlight #29 by Doug Moench and Don Perlin.

MARVEL SPOTLIGHT #28 & #29:  Y’all may remember I read all 12 issues of the Brian Bendis/Alex Maleev Moon Knight title and had pretty mixed feelings about it (not shitty enough to be a hoot, but shitty enough to feel like a time-waster). And in reviewing it, I mentioned my fond memories of my initial encounter with Moon Knight, the pre-Sienkiewicz Marvel Spotlight issues by Doug Moench and Don Perlin.  The two part story (“The Crushing Conquer-Lord” and “The Deadly Gambit of Conquer-Lord”) is speedy, jams in lots of fights, brings up to speed on Moon Knight’s origin and gives all of his various moon-related shenanigans a quick turn in the spotlight, and is steadfastly ridiculous.  This two parter reads like a cheap-o James Bond knockoff movie but with a superhero attached, but Moench and Perling start fast and only pick up steam from there (though there is a bit of regrettable homophobia that was sadly pretty standard for the times).  As those of you who’ve read Moench’s Master of Kung-Fu know, the guy can crank out a pulp pastiche with deceptive ease, and issue #29 manages to jam 13 pages of fights into its 17 pages (four of them taking place on an exploding chessboard).  It ain’t subtle, but it works. 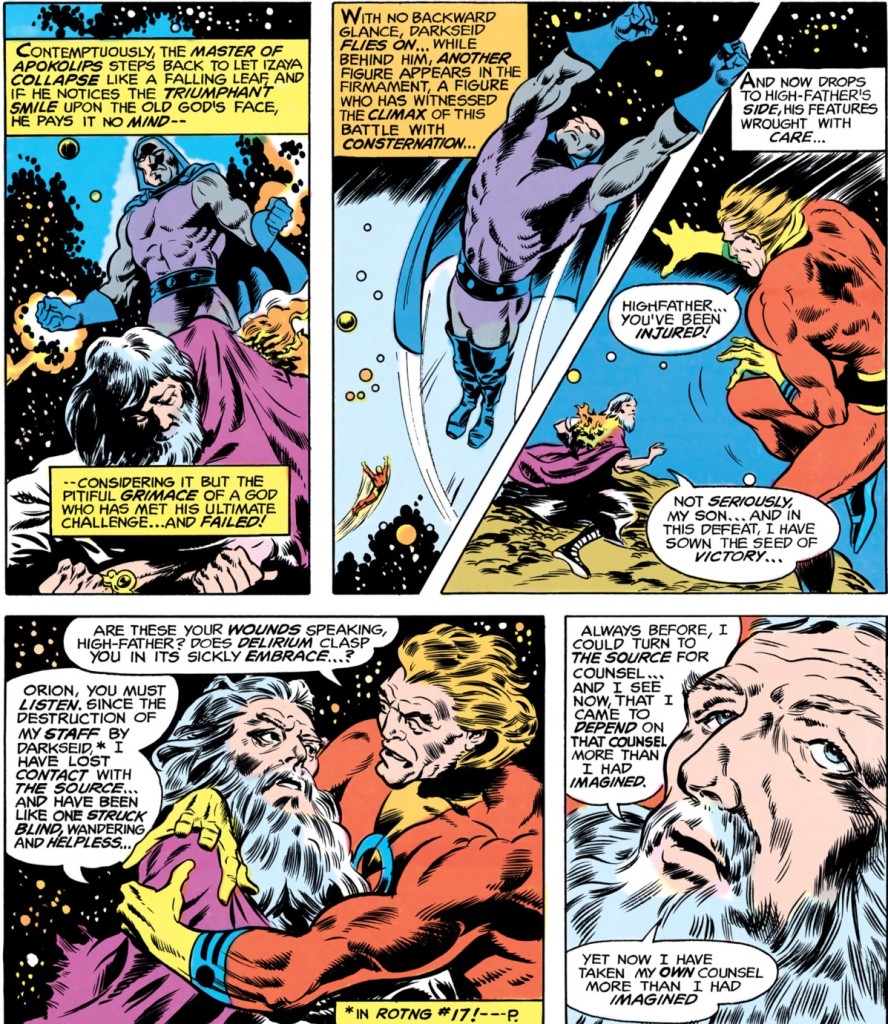 From Adventure Comics #460: Orion of the New Gods by Gerry Conway and Don Newton.

ADVENTURE COMICS #460 & 461:  As a heavy duty Marvel kid who wandered over to the DC side of town as I aged, I sometimes find myself moving through the (to me) unexplored backwaters of old DC books feeling like a boorish tourist, the ugly American quick to guffaw ironically over something that is actually just sad and impoverished.  Take these lovely bulk Convergence sale purchases–66 pages of DC Comics for only $0.99!–which strike me as mostly sadly terrible.  I think I can properly appreciate the charms of Cary Bates on The Flash–he’s the guy who can spin a visually compelling story off an offbeat premise, DC Silver Age style, that makes for an okay read even if Bates isn’t trying to gently update the formula; and Jim Aparo drawing a Deadman story needs about as little justification as butter and salt on  popcorn.  But watching Gerry Conway and Don Newton try and conclude the saga of the New Gods in 10 pages, or watch Paul Kupperberg figure out anything to do with Aquaman, or watching Jack C. Harris write a Wonder Woman story that makes Bob Kanigher seem like Dorothy Allison by comparison?  I just feel like one of those guys either going, “ha, ha! Look, honey! “Hambuggers! The sign says hambuggers! And they taste awful! Ha, ha!” or else the guy who just spends the entire day silent, staring at everything around him with a bead of sweat lining his brow until it’s time to go back to the concrete cabana the tour company has booked him in so he can stare quietly at the dismal curtains and feel ugly and empty inside.