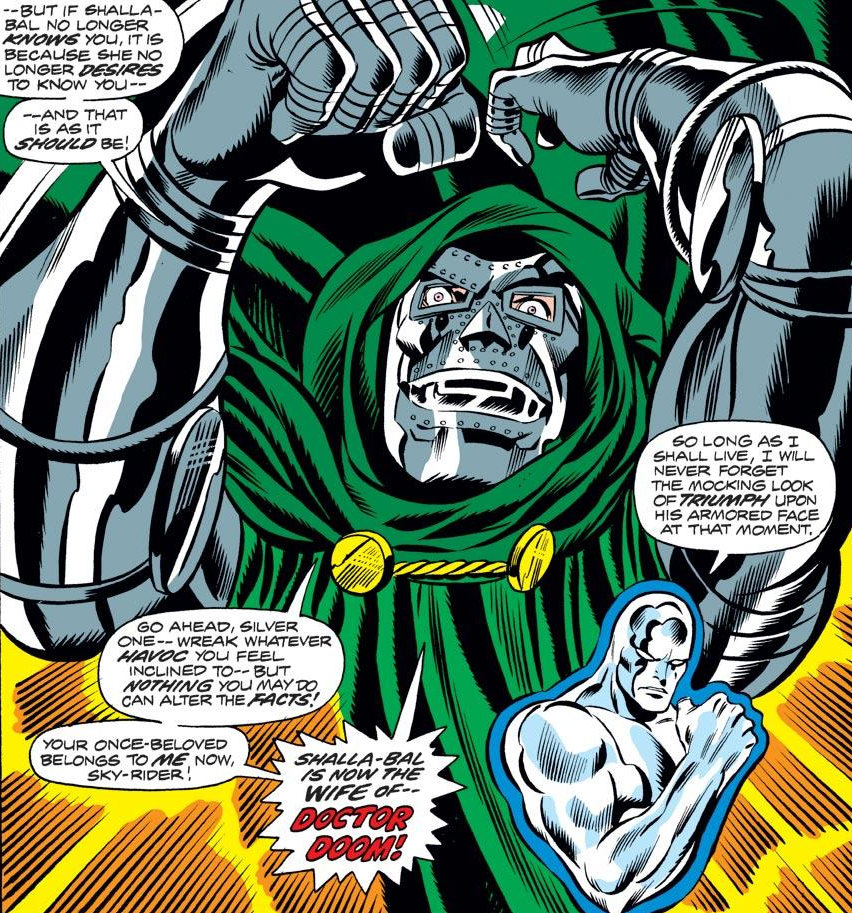 Previously on Baxter Building: It’s all gone wrong! Sue Richards has left Reed and the team! Reed has managed to zap his own son with a ray gun that might have saved his life, but pushed him into a catatonic state! And to make matters worse, the book is just kind of… boring? Where next for our fightin’ foursome? Reed on! (Yes, that pun was intentional. Not good, mind you, but intentional.

0:00:00-0:04:16: A quick introduction — in large part edited down from a longer conversation that was, due to audio quality, almost unlistenable; we were beset by technical troubles this time around, and the audio quality on my side of the conversation is unusually bad, for which we apologize — lets you know that we’re covering Fantastic Four #147 through 159 this time around, with a brief mention of Avengers #127, an issue that crosses over into this run. We’re also not covering the Giant-Size Superstars and Giant-Size Fantastic Four issues that were published parallel to these issues, primarily because I didn’t read ’em… but we might do that at some point in the future. (For those wondering, the annuals that we haven’t talked about for awhile have either been reprints or not actually been published annually; they return soon, though.) And for those wondering what I was talking about when I referenced the Oakland police chief, this is a reasonable round-up. 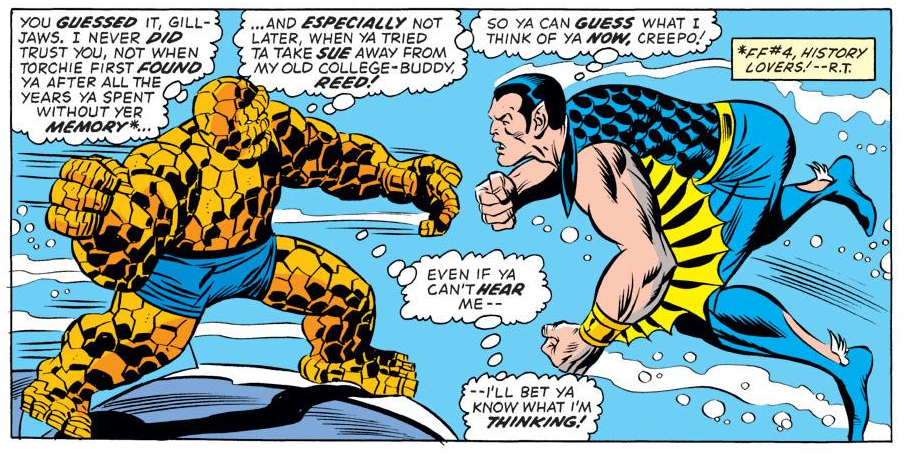 0:04:17-0:23:00: What’s that, you say? You want to see Gerry Conway write a storyline with a denouement that is so out of character, you might wonder if he’s been possessed by a 1950s issue of World’s Finest? Well, you’ve got it with Fantastic Four #147-149, a trilogy that not only doesn’t hang together well, but has a final episode that seems to feature what I remain convinced is a swift walking back of what had been intended as a sincere opener, turning the whole thing into a weird and weirdly wrong practical joke played by a character who not only isn’t known for their practical jokes, but also doesn’t really care about the people he’s professing to do a nice thing for. (Despite that, I really liked this storyline, purely because the climax is so silver-age DC-ish; Jeff disagrees, however.) We talk about whether or not the final issue is the result of a last-minute rethink, an explanation which would also serve to make the middle chapter less like disconnected filler — but it wouldn’t really help with the fact that neither Reed nor Sue have any real agency in a story that serves to close out their marital dispute. As Jeff puts it, “there’s no internal life to the characters.”

0:23:01-0:33:34: Taking a brief sidestep, Jeff talks about the underwhelming nature of all the issues we’re covering in this episode and wondering if their flaws are the result of Marvel as a company. I then point out a couple of final things I noticed about the issues we’re talking about — that Gerry Conway seems to think that the FF believe that Namor is telepathic, and that Medusa is already being written out the book a full ten issues before she leaves — and then we move on to…

0:33:35-0:50:33: …Fantastic Four #150, which is the second part of a crossover with Avengers #127. “Let’s dive on,” I say, inventing a new phrase which sounds like I’ve just learned english and don’t understand common phrases yet. But dive on we do, nonetheless, talking about how painfully half-assed this issue feels in comparison to the Avengers issue — which, admittedly, is written by Steve Englehart, whom Jeff and I are always marks for. It’s an impressively rushed finale for the crossover, though, with Conway seeming disinterested in the entire premise, and Rich Buckler delivering what Jeff calls a “wet fart” in terms of the artwork. He’s also got a theory that the issue is a stealth re-do for Fantastic Four Annual #2, but I’m not entirely convinced, and think that they’re trying to out-do the Avengers/Defenders War. Also discussed: creeping nostalgia and the end of the Franklin subplot that forgot that Franklin was actually a person and not “the child.” 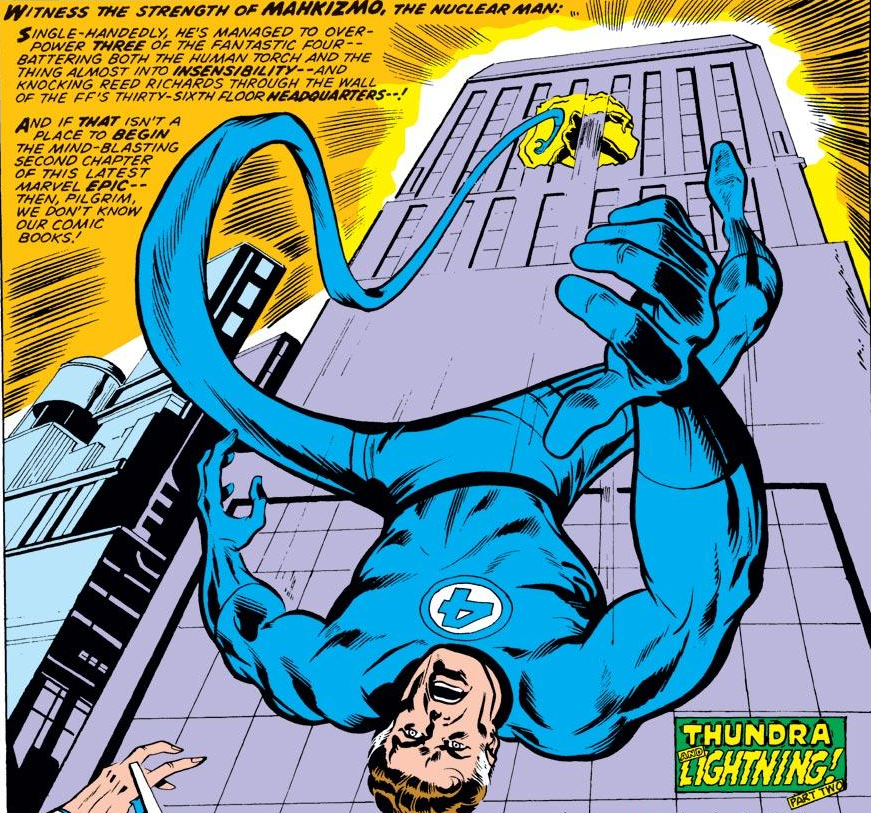 0:50:34-1:09:28: Gerry Conway becomes the third writer to leave the series in the middle of a multi-part storyline, vanishing before the final part of the Thundra origin in Fantastic Four #151-153. I suggest that he jumped ship to DC, but Jeff (rightfully) points out that Conway would briefly be Marvel E-i-C in 1976, so who knows where he went this time around — perhaps he simply ran away in embarrassment over a storyline that prompts Jeff to describe one scene as “a sexier version of Planet of the Apes,” and introduces a new villain called Mahkismo. Yes, it’s the Battle of the Sexes, 1974-Marvel-Style, and it’s everything you think it’d be and more, thanks in part to a terrible fill-in inking job in #152 that sees Reed Richards have three hands on the splash page and the editors actually apologize at the end of the story for how bad it looks. Things improve greatly with the final installment, which sees the underrated Tony Isabella step in — Jeff and I are fans, it turns out — and Joe Sinnott return, but make no mistake: this is a horrible storyline. “Gerry Conway does not go out on a bang,” I say, in part because his final issue ends like this: 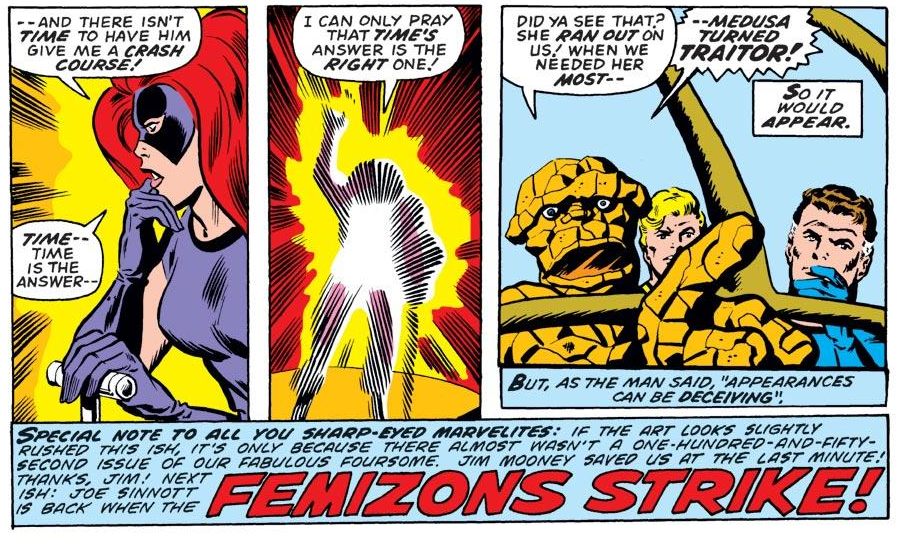 1:09:29-1:19:32: How do you know that you’re scraping the bottom of the barrel? When you have an issue that’s in part a reprint of a Strange Tales story featuring the Human Torch, surrounded by a framing sequence featuring temporary new writer Len Wein (and artist Bob Brown) that literally repeats the gimmick of the original, so that you get not one but two reveals that make little sense whatsoever. Say hello to FF #154, everyone! We discuss the way in which this issue contrasts “current” (1970s) Marvel with the classic Stan Lee period, Jeff references Speed Racer, and then compares Len Wein to Frank Miller, which just seems cruel, let’s be honest.

1:19:33-1:41:23: Fantastic Four #155-157 are, according to me, “Fantastic Four on automatic pilot,” and I’m sticking with that. These are, after all, three issues where the second issue is called “Middle Game,” and the third “And Now… the Endgame Cometh!” They’re also issues with an impressively off-model Silver Surfer both visually — he’s newly buff! — and intellectually, because he’s apparently such a sap that he’ll willingly work for Doctor Doom in order to win the heart of a complete stranger just because she looks like his ex-girlfriend. (It’s more complicated than that, but that’s the main thrust. Kind of.) It’s a three parter that combines the fear of the independent women vibe of the last year-or-so of issues with the rehashing past glories nostalgiafest that has plagued the title for around the same time to come up with a plot that manages to steal from not one but two Lee/Kirby Doctor Doom storylines while still managing to feel impressively underbaked. There are two things going for it, on a purely “oh, shit, no” level, though: the caption explaining Roy Thomas’ use of the word “zugzwang,” and an epilogue that really has to be experienced for the full effect. Don’t worry; we talk about both in detail.

1:41:24-2:07:57: “The best thing, and I shit you not, about [FF #158-159] is the title of #158,” I say, and I’m not wrong. (That title is “Invasion From The 5th (Count It, 5th!) Dimension,” which really is pretty great.) When the thing that amuses us the most about a two issue storyline is the term “Thunderhorn,” you know you’re on a loser, but we also get to talk about the out-of-nowhere career suggestion that Sue should become a private detective — I’m for it, Jeff is against — as well as how great Joe Sinnott’s inks are when it comes to drawing blue guys from the 5th Dimension. Oh, and John Romita makes a surprise (uncredited) inking appearance at the end of #159, for some mysterious reason.

Impressively, we get so derisive about the fact that FF is dipping back into the Strange Tales well for the second time in six months that we forget to mention that the issue ends with Sue officially rejoining the team, but, as Jeff puts it, “these two issues seem like the definition of weak sauce,” so can you blame us? (Yes, you can. Sorry.) Also! The magic of Joe Sinnott and why he makes Fantastic Four feel like the Fantastic Four perhaps even moreso that even Stan Lee or Jack Kirby, and the problems with the Marvel Method when it comes to dealing with younger artists.
2:07:59-end: We close things out by explaining that we’ll be reading Fantastic Four #160-170 next time, and reminding you that you can find us on Twitter, Tumblr and Patreon. Thank you for suffering through the bad audio this episode, and for reading through the shownotes — next time, we’ll try to be better. Excelsior…?