Okay, so it’s unlikely that, between Halloween, the end of Daylight Savings Time, and all the usual stuff that goes into the weekend that this post will truly help you BUT JUST IN CASE let me tell you about some of these books I picked up in the Supergirl sale that ends on 11/2.  Matt already hipped us to Supergirl: Cosmic Adventures in the Eighth Grade (I picked up my digital copy after his review), here’s a few of the slightly more musty treasures to which I wanted to draw your attention.  Because for ninety-nine cents a pop, they’re pretty great. 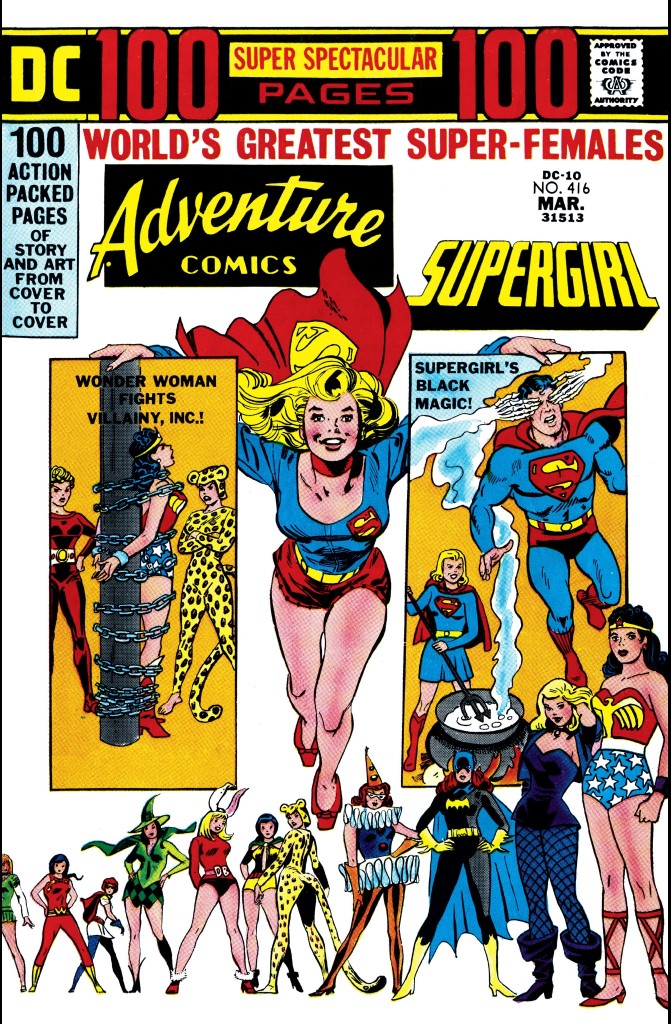 ADVENTURE COMICS #416 is from that era of the Seventies where DC was apparently making okay cash publishing these “100 page super spectaculars” (which, since they counted the front, back, and inside covers, were really 96 pages) of old reprints for fifty cents.  (Some issues–the later ones, I guess–had a new story up front, and then jammed the rest with reprints.)   According to the Wikipedia page, these issues also existed in part to help secure the rights to the Fawcett and Quality comics characters DC had published by giving them cover space and a story inside.

Even though I was pretty much a Marvel kid through and through, I always dug these issues: when your weekly allowance is a dollar, 100 pages for fifty cents will do you for a comic book fix.  Plus, looking back at it now, even though I loved punching above my weight with Amazing Spider-Man, the bulk of these reprints were very much kid’s comics, perfect for my reading age, and filled with a lot more whimsy and goofiness than the current comics of the day.

Anyway, Adventure #416.  It starts off with a two-part Supergirl reprint, where Supergirl discovers her parents from Argo City are still alive.  Like a lot of Weisinger-era super-stories, it seamlessly blends a rich mythology–this story has appearances by Comet The Super Horse, General Zod and the Phantom Zone, Argo City, and the Bottled City of Kandor–and a direct distillation of childhood  anxiety:  if Supergirl’s real parents are alive, what will she do about her loving foster parents?  It’s an enjoyable read for nostalgic adults and probably even a better one for young readers. Leo Dorfman and Jim Mooney craft such professionally smooth product it’s easy to overlook a sequence where an entire city of innocents painfully dies of radiation poisoning.

It’s followed by a Johnny Thunder story from 1947 featuring the first appearance of Black Canary.  She’s a villain in the Catwoman/Harlequin style–evil but alluring–and artists Carmine Infantino and Frank Giacoia draw the hell out of her, as well as everything else in the story.  The tale, like the character of Johnny Thunder, is a complete goof, with scripter Bob Kanigher trying for something closer to a Looney Tunes sensibility.  At the end, after Johnny has waxed rhapsodic over Black Canary, his mystical protector Thunderbolt admonishes him: “No, you don’t! I’m tired of heroes in comic books falling in love with beautiful villainesses! You’re not much of a hero, m’lad, but you don’t fall in love…not in this story!”  This is followed by one of the all time great postscripts, almost Poochy-esque in its callousness: “The Black Canary appeared five more times with Johnny before taking over his spot in Flash Comics #92 (Feb. 1948).”  Sorry, Johnny! 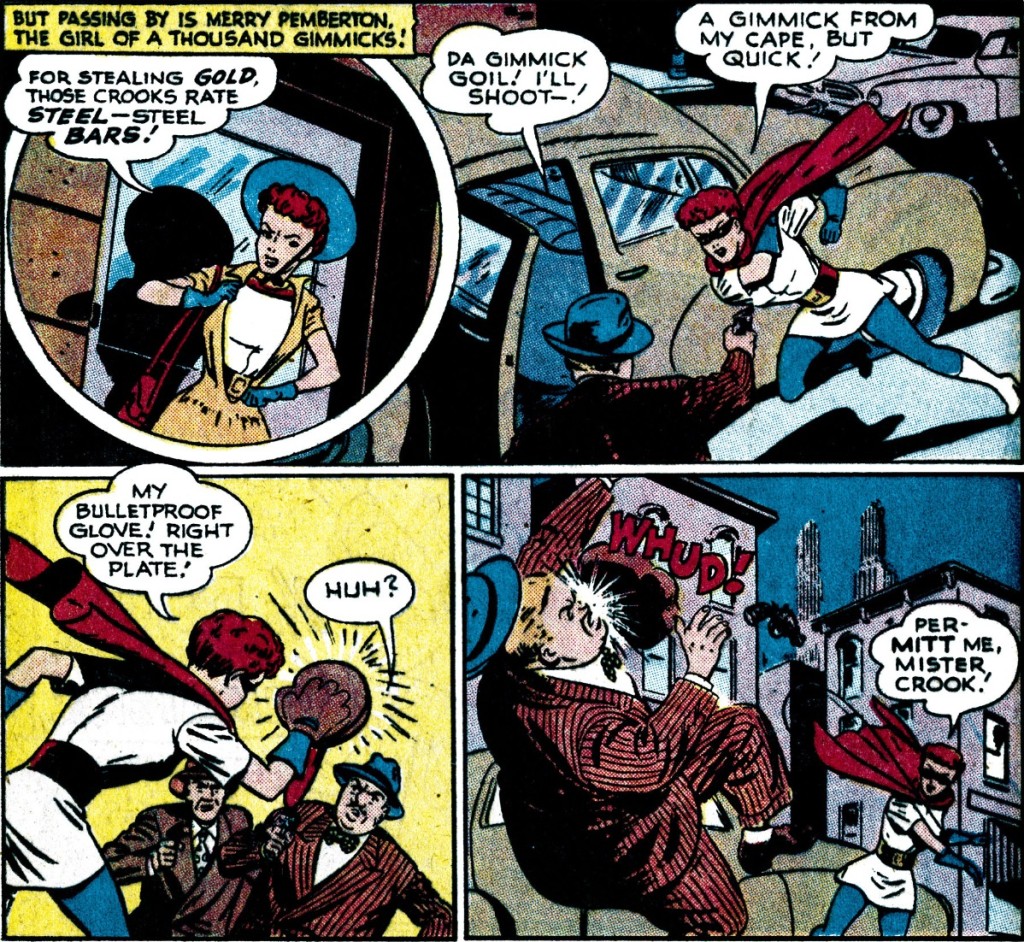 This is in turn is followed by a 36 page Wonder Woman epic from William Moulton Marston and H.G. Peter, in which all of Wonder Woman’s villains escape and literally every single character in the story gets tied up twice (I dug it but I’d already read it); a Phantom Lady story by Frank Borth that is beautifully illustrated and about as low-stakes as any superhero story that has ever been written; a great little story featuring Merry, The Girl of A Thousand Gimmicks, who looks like a Colleen Coover character and has an endless number of crime-fighting tricks up her sleeve; and a closing Supergirl story where her use of “the Satan Ring” causes her to grow horns and becomes a magical “she-devil.” Again, it’s solid all-ages stuff with a very direct throughline to childhood fears.

I figured I’d managed to score enough prime comic book lunacy for under a buck in just that one issue. But then, while looking through the page count of the later issues of Adventure, I realized the following issues, while not nearly as hearty a pagecount were weighing in at 39 pages, with the Supergirl story (plus cover) only accounting for 14 or so pages of that. 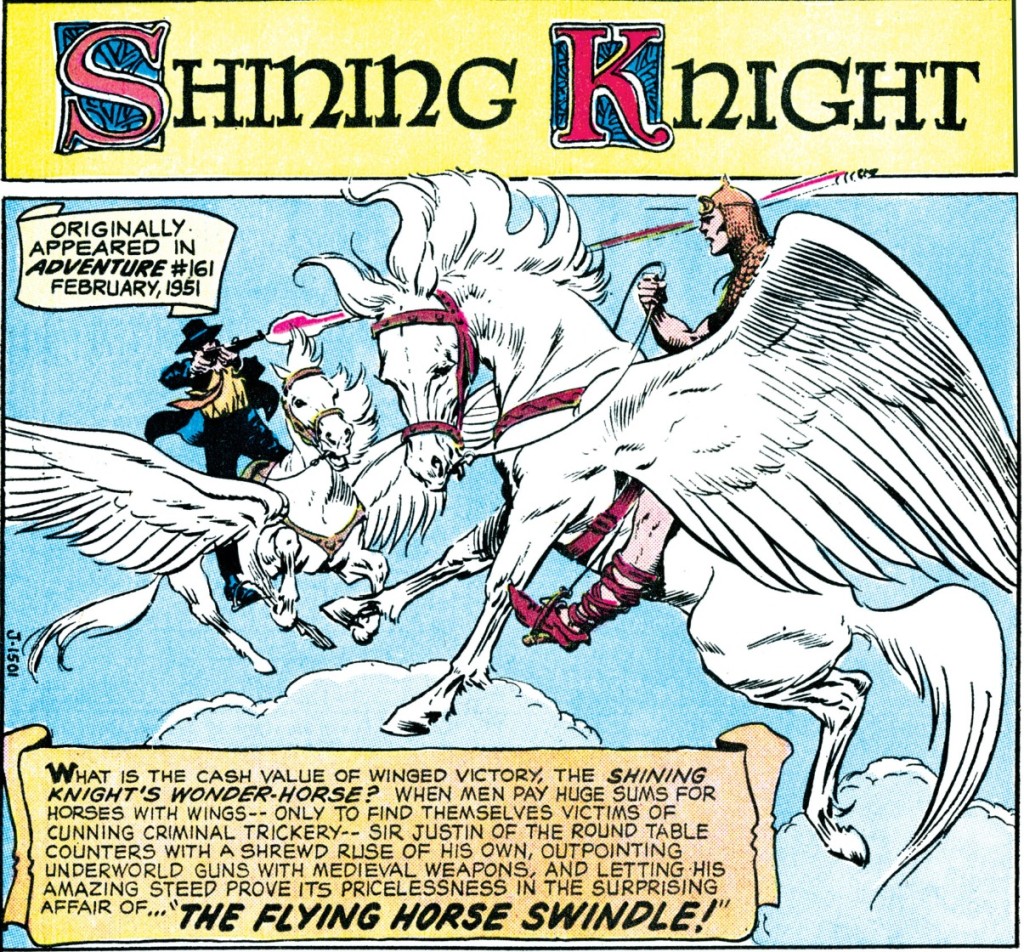 For example, ADVENTURE COMICS #417, has a “modern” Supergirl story by Steve Skeates and Bob Oksner, and then a Shining Knight story drawn and inked by Frank Frazetta.  Even though it has a flying horse and a dude with a sword, this is not the Frazetta who launched a thousand heavy metal album covers, but rather a comic book artist who somehow manages to synthesize Alex Raymond, Hal Foster, and Milt Caniff at once.  The story is almost as low-stakes as the Phantom Lady story in Adventure #416, never topping its opening splash panel of a mid-air joust between the Shining Knight and a dude with a rifle (which never happens in the story itself), and the art is sadly a bit of a letdown. 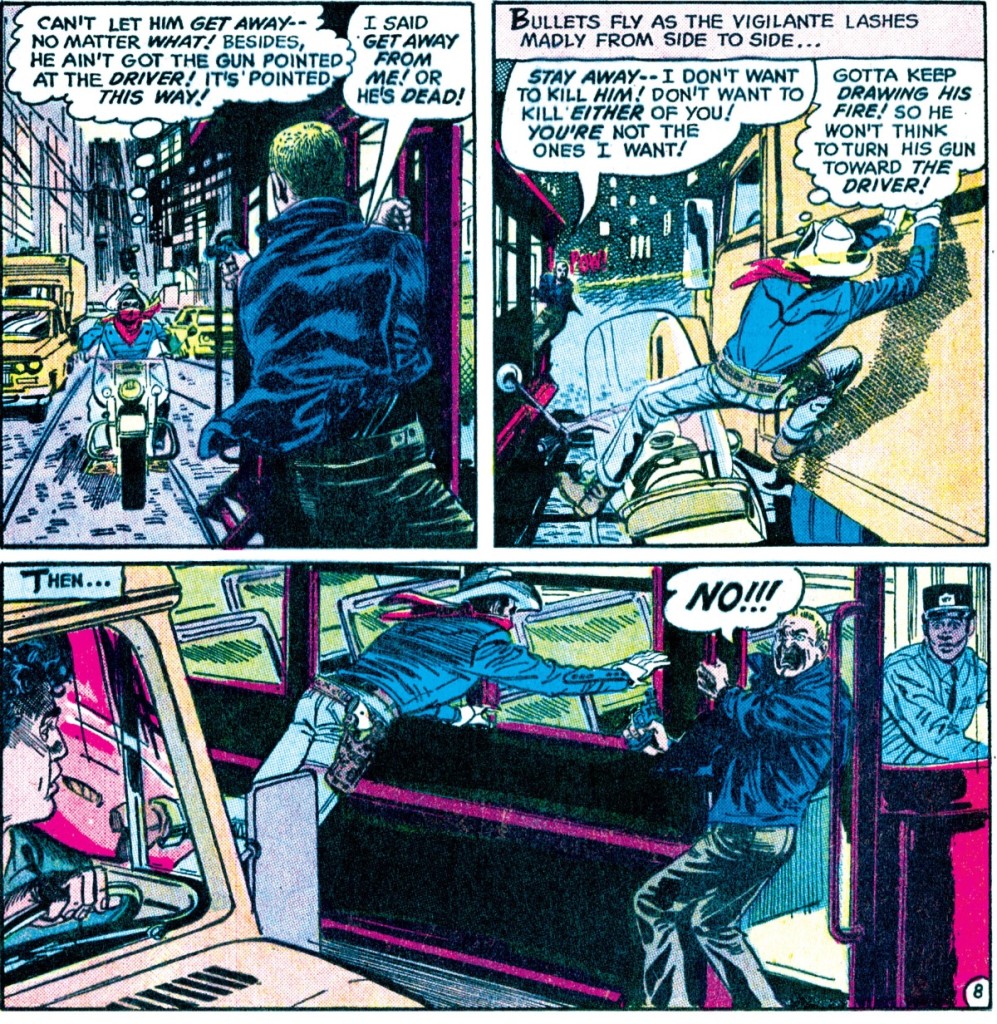 But it’s followed by a Vigilante story, “The Cop Killer,” where Gray Morrow draws the hell out of The Vigilante and his motorcycle trying to solve a crime in San Francisco.  It ends with a fight scene on a cable car so beautifully staged and drawn with Morrow’s fine linework I didn’t mind he didn’t know what cable cars looked like from the side, or that nobody involved in the story at any level knew how they worked.

Follow that up with the origin of The Enchantress, which features great art from Howard Purcell and a breezy story by Bob Haney, and this is also a book I was more than happy to pick up for less than a buck.

Similarly, issues ADVENTURE COMICS #418 and ADVENTURE COMICS #419 feature a two part Black Canary story by Alex Freakin’ Toth, early Phantom Stranger stories and, depending on the issue, either a Zatanna five pager and another Enchantress story, or a Dr. Mid-Nite story that had literally sat in the inventory drawers for more than twenty years.  I’ll be honest: I thought these issues were worth the coin for the Toth material alone, but I realized halfway through issue #419 I’d owned the issue as a kid, and I was delighted to see what bits and pieces from the stories had hung around in my head ever since. 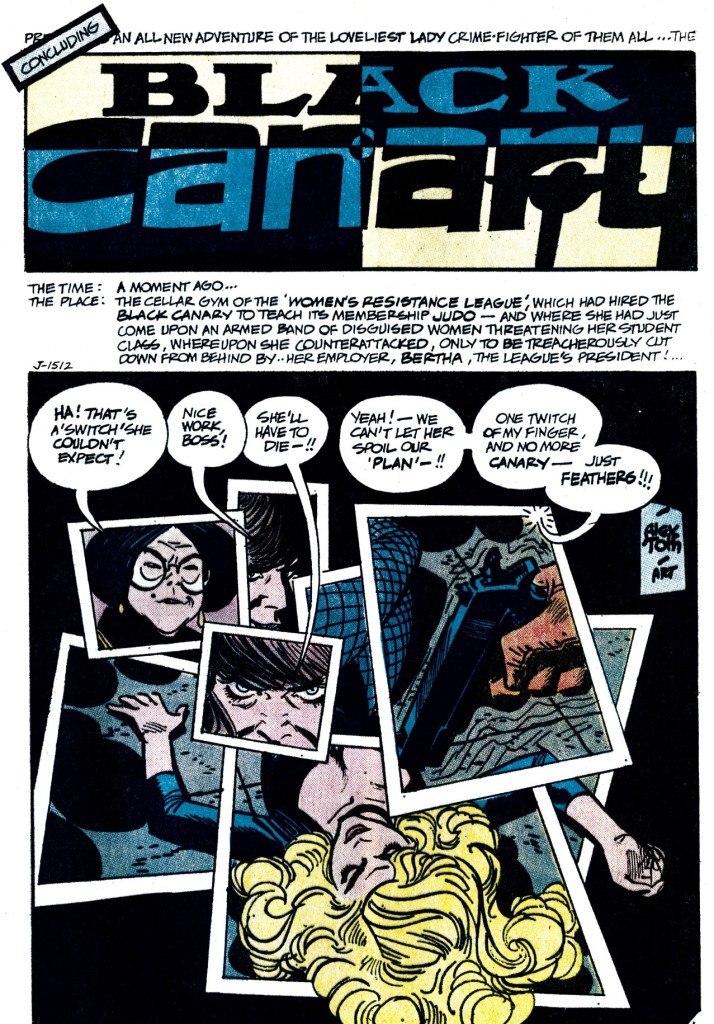 All that said, it’s worth pointing out if you’re planning on picking these up for the Supergirl stories, that the non-reprint stories in Adventure #417-419 are genuinely terrible as stories about a female superhero.  Arguably, “All Men Are But Slaves” is the best of a bad lot, in that it’s a Supergirl story told from Supergirl’s point of view, but it’s a incredibly dull alternate dimension story where women have enslaved men because men kept doing all that war and polluting stuff…just like *gasp* the world of today! 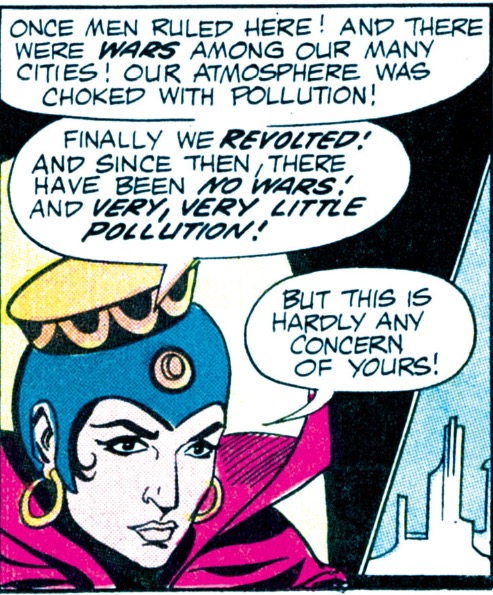 (I laughed at how emphatic the queen is about the lack of pollution.  Clearly, there’s still a lot more pollution going on than she’s willing to let on.)

And yet it still beats out the Supergirl stories in issues #418 and #419, both of which are stories about men, stories that also happen to have Supergirl in them. Sure, it’s kind of fun to see Johnny Double, decades before Brian Azzarello revived him, cracking wise on the streets of San Francisco, but that fun is diminished when you realize Supergirl only exists as a flying plot hammer. And issue #419, “The Thief Who Loved Supergirl” is even worse, in that the thief, Mike Merrick, backhands his girlfriend when he discovers she’s been casting magical spells on Supergirl to protect him. Admittedly, Merrick isn’t supposed to be anybody’s idea of a hero, but the only juice to the story is derived from a empathizing with his desire to be good (represented by his unrequited love for Supergirl) and his inability to stop being evil (represented by his devoted, black magic wielding girlfriend).

It’s a stiff little shot of toxic masculinity, which is exactly the kind of thing I think Supergirl stories should avoid.

I didn’t come close to buying all of the books in this sale, or even reading all the books I bought, but too many stories in this sale have similar problems.  I’ll save it for another post, but Bob Haney’s Brave and The Bold #63, featuring Wonder Woman and Supergirl, has such a gross and creepy take on the two characters–basically, all they need is some French dudes macking on them and they lose all interest in being superheroes–it probably set back male understanding of women’s issues by twenty years merely by being published. It’s a fun little comic in a “Holy cow, this is so wrong-headed!” kind of way, but it’s not the sort of thing I’d want a kid to read without a very long accompanying lecture. 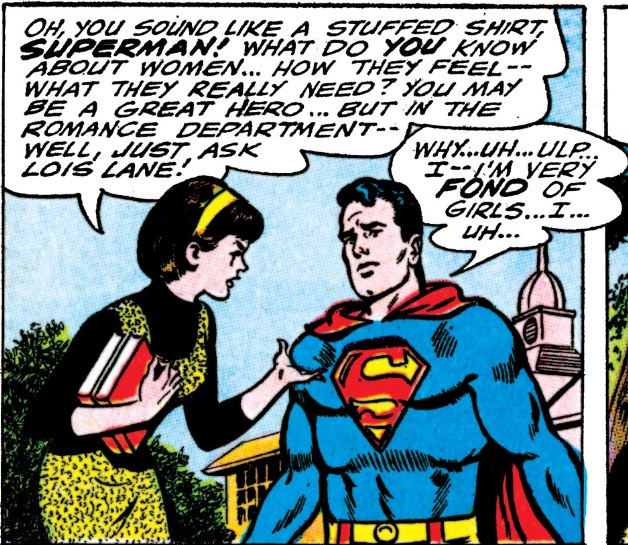 I know this is Jeff’s lament of 2016, but I do with DC had some equivalent to Marvel Unlimited. A lot of the material gathered in these back pages is completely charming and although I could be viewing them through glasses of old guy nostalgia, the majority of the silver age DC material holds up as engaging material for kids (as long as you parse to either avoid or explain some egregiously sexist cultural attitudes).

But also I’m aware that I can’t talk with any confidence about current Supergirl books (say, the last two or three incarnations of the character) because, given the chance, I’d rather drop that ninety-nine cents on a 52 page back issue from my childhood than a ninety-nine cent 23 page story from three years ago that probably won’t be self-contained.  A “DC Unlimited” might make me a little more willing to invest some good will and actually see what’s happening with Supergirl now.

But until that happens, we still have sales like these, right?  Now, if you excuse me, I believe I have some Supergirl: Cosmic Adventures in the Eighth Grade to check out…