Continuing a re-read of Captain Britain comics, pre-Excalibur, which started back here. 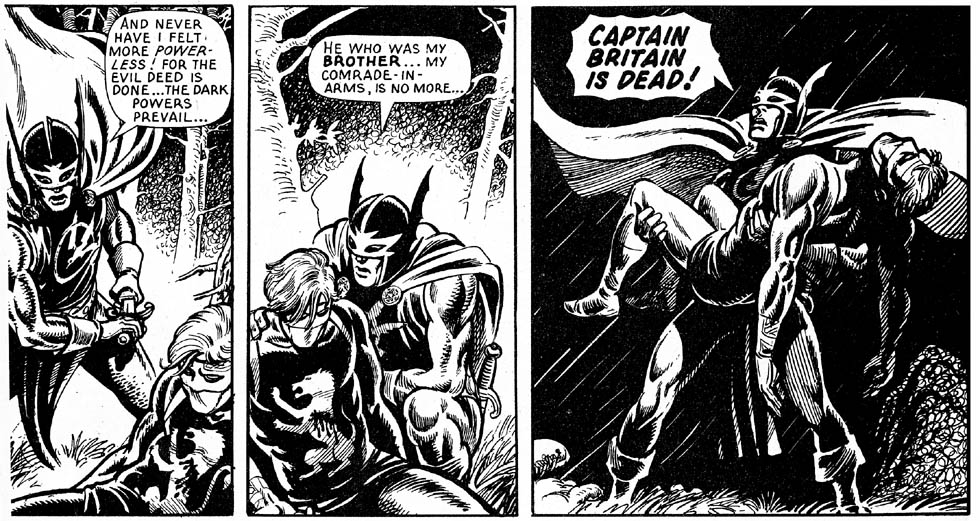 If the first run of Captain Britain demonstrated ably that the Mighty Marvel Age of Comics couldn’t really come to grips with the British comics format — actually, to be fair, it demonstrated that the Marvel Age of Comics wasn’t that Mighty when left to lower-tier creators in general, but the pacing became a significant problem, especially in the series’ back half — the character’s second incarnation was something that many Marvel readers would’ve struggled to recognize in terms of format altogether.

The Black Knight strip that ran in Hulk Comic — a late-’70s title created to take advantage of the popularity of the Bill Bixby/Lou Ferrigno TV show — was every bit as British as Captain Britain Mark 1 had been American. Each issue contained three page installments that were packed with information — nine panel pages, with ~40 words per panel — focused on plot rather than characterization, heavy on expositionary narration (“With Modred’s spell momentarily broken, the villagers of Stenleigh milled about in confusion… and the Black Knight saw his chance!”) and short on visual spectacle to a degree that feels almost un-Marvel-esque. It’s difficult to imagine what anyone more used to the more leisurely, banter-heavy Marvel titles would’ve made of this strip, especially if they’d missed out on the other British comics that made more use of this format. 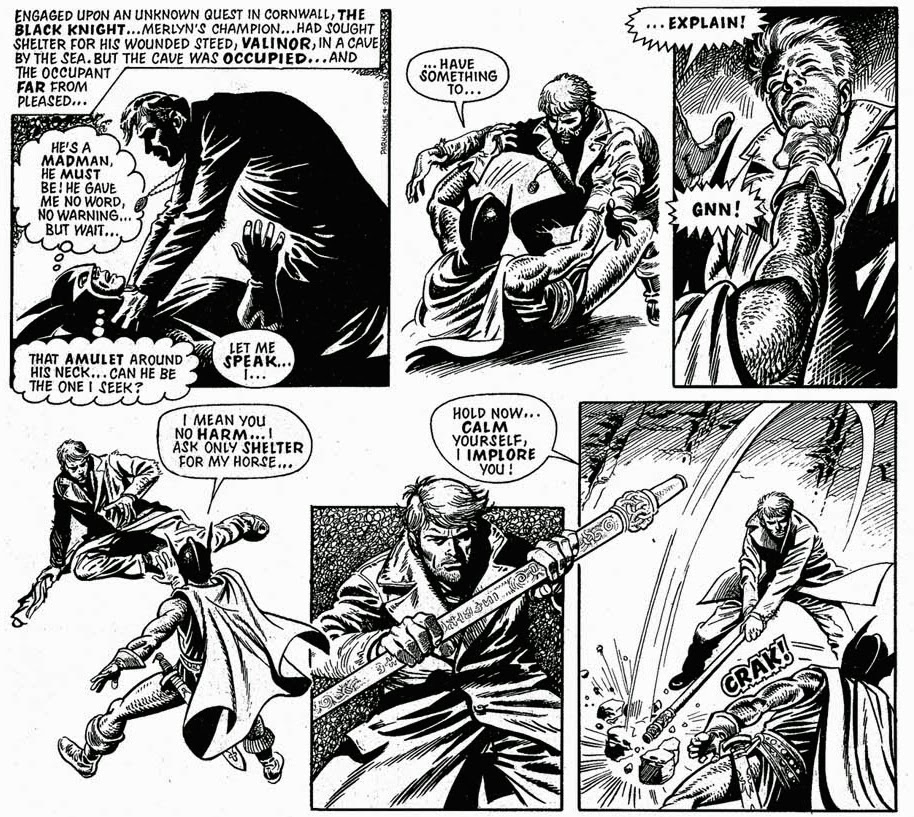 (While British titles like Buster or Whizzer and Chips were predominantly comedy comics, with strips appearing in one- or two-page installments that were relatively self-contained, they tended to have continuing “adventure” strips that created the format Black Knight used; it was the preponderance of these strips that made 2000AD — which features installments of five or six pages! — seem almost decadent by comparison, when it first appeared.)

That said, even for an audience who were used to the three-pages-all-of-them-packed format, Black Knight might have been hard to stomach. While the art by John Stokes and Paul Neary is solid enough, the writing — by Steve Parkhouse, with assists from editor Dez Skinn — feels at once frenetic and so slow as to feel comatose; each episode was packed with things happening, but overall plot development was both slow as molasses and frustratingly incoherent: Captain Britain has amnesia but now he doesn’t and he remembers everything or maybe he doesn’t and now he has his powers back because of Merlin and there’s also dragons and Otherworld and maybe the Black Knight has something to do, as well. 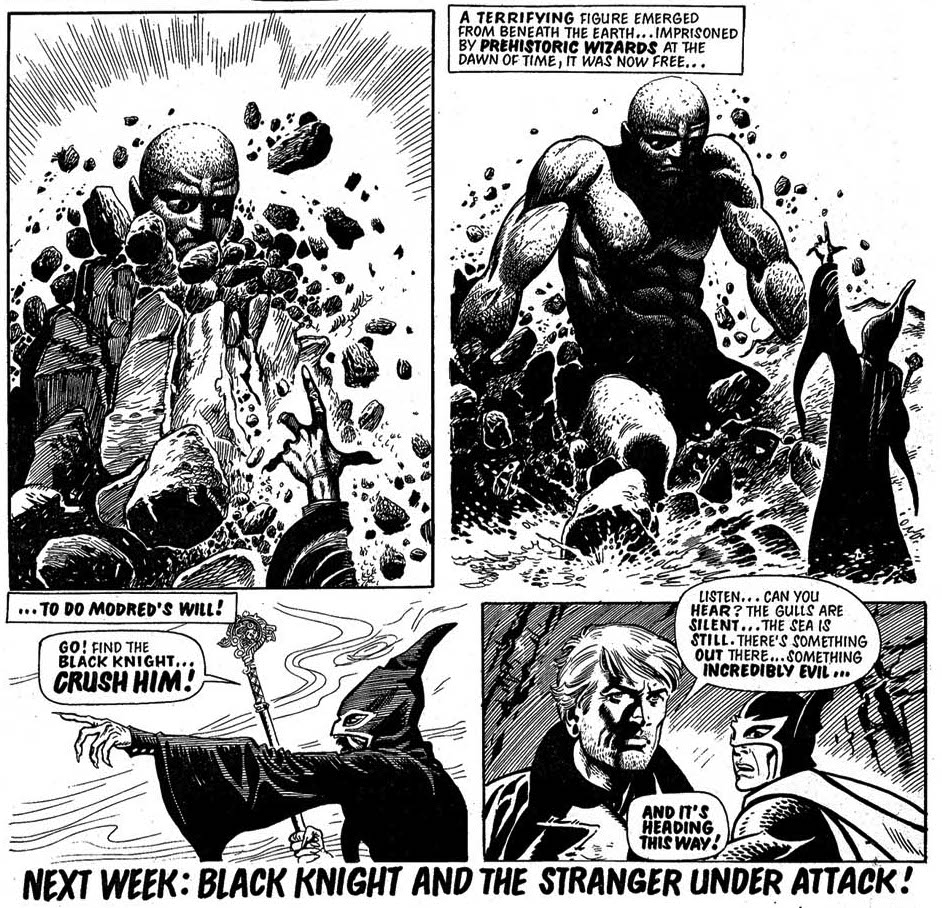 Actually, for a strip that’s called Black Knight — except for when it’s temporarily renamed Captain Britain, don’t ask — there’s actually precious little Black Knight-centric story on offer, and the Black Knight that’s there feels very un-Dane Whitman. But, really, that’s the least of its worries: chance are that those who’d stuck with the strip anywhere past the first, say, ten episodes would follow it no matter what it was called, or who was starring in it and how they acted. Which, to be blunt, is probably a plus, considering.

What’s particularly surprising is that Parkhouse went on to write something else in this flavor not too long after this strip — The Spiral Path, a strip for Skinn’s later Warrior anthology that also gave the world Alan Moore’s Marvelman and V For Vendetta with David Lloyd — that is almost as successful as Black Knight is a failure (and I say that as someone who doesn’t really dig fantasy as a genre). There’s an argument to be made that he learned his lesson from Black Knight, but there’s more to it than that, I think; freed of the dual parameters of having to tie into existing Marvel mythology (and especially Captain Britain mythology) and having to create what is essentially an ongoing serial with seemingly no endpoint in sight for much of its run, the writing comes across as more confident and, as a result, more fun to read. Viewed in comparison to Black Knight, The Spiral Path is like a glimpse into an Earth-2 scenario where comics were just better.

By the time the Black Knight strip runs to its end — some 60-odd episodes in! — the culminative effect is one of exhaustion and extreme indifference: a lot has happened, no doubt, but none of it was particularly memorable or especially interesting. Sure, there have been a lot of pages and exclamation points along the way, but any attempt to summarize what actually happened is almost impossible because, really, who can even remember? For Captain Britain fans at this time, things undoubtedly didn’t look good: two separate attempts to make him happen had run aground, and all seemed bleak. Little did they know that better times were just around the corner, and all because things could become even bleaker still.

One comment on “Goblins, Elves and Mortals In Battle: Captain Britain’s Second Incarnation Gets A Little Fantasy-Heavy”