I’ve got a backlog of comics I want to write about. It currently forms a towering bulwark on my bedside table, containing all kinds of stuff — some DC and Marvel, yes, but also indie and indie superhero and slice-of-life and YA and horror and even a couple of comics-adjace prose books. (And that’s not counting the god-knows-what-all that’s piled up in a digital backlog.) But between the dayjob and family stuff and all the other things I do, I don’t even have time to read this stuff, let alone form a cogent opinion and write about it. (Hence the backlog. Duh.)

And yet, spinning off from my usual casual readalong with the Jay & Miles X-Plain the X-Men podcast, I’ve found myself somewhat obsessively reading through old Excalibur issues. It’s a book I remember loving, then just as suddenly not loving at all anymore, and it’s been fascinating on re-read to find the exact same thing happening. I would’ve thought that changes in me, in my life, in my perspective, would’ve changed how I react to these comics. But, nope, I still hit that “Cross-Time Caper” storyline and just feel my interest seeping away.

One crucial change, though, is that I can now sort of see WHY that happened — what caused it then, what’s causing it now, and what it means for the way I read superhero comics in general. Which is what I’ll write about in a list-y format below!

(Another note of mild interest: in one of my other guises, as a sports columnist in the local alternative weekly, I regularly rail against nostalgia as a driving force in sports. I view it as insidious, manipulative, often retrograde. Yet here is my eight trillionth post looking back at comics I liked as a kid. If I could figure out how I justify balancing these two completely oppositional points-of-view in my brain, I could make a fortune ending internet arguments just like Kurt Busiek used to. Sigh.) 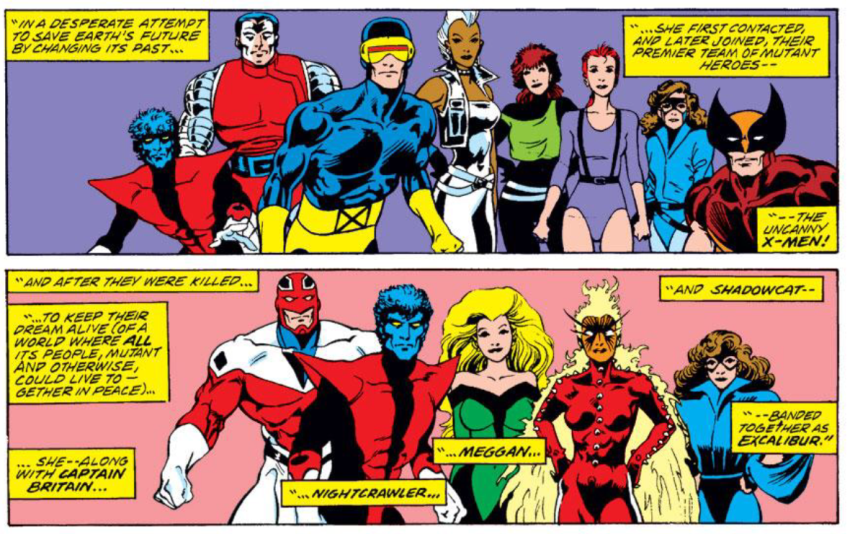 So, then, sort of scattered thoughts on Excalibur #1-27ish, the Marvel series about some X-Men characters in the U.K. that started in 1988.

1) Alan Davis is even better than I remembered. I’ve always thought pretty highly of Alan Davis’s artwork, but he’s never someone I would’ve cited as one of my favorite superhero artists. I wouldn’t describe him as flashy, nor as particularly stylized … but rereading this I realize that his versions of these characters are very close to the default in my head. (For most of the X-Men types, it probably fluctuates between Davis, John Byrne, and Paul Smith.)

His characters convey information by body language, by posture, by facial expression; he knows when to go exaggerated and cartoony, and he knows when to play things slightly closer to mainstream Marvel universe “realism”. He’s just an absolute master of the comics page, and his work makes reading the stories effortless. In essence, he’s so good that he becomes almost invisible.

Which is important, because the more heavy lifting an artist can do quietly, the less writer Chris Claremont has to do in verbiage. And as soon as Davis starts dropping off the book for stretches (first just a couple issues picked up by Marshall Rogers; then for longer and longer stretches with increasingly rushed-looking work by consistently dodgy artists) the book’s readability dips notably, and Claremont starts using more and more captions and word balloons to fill. 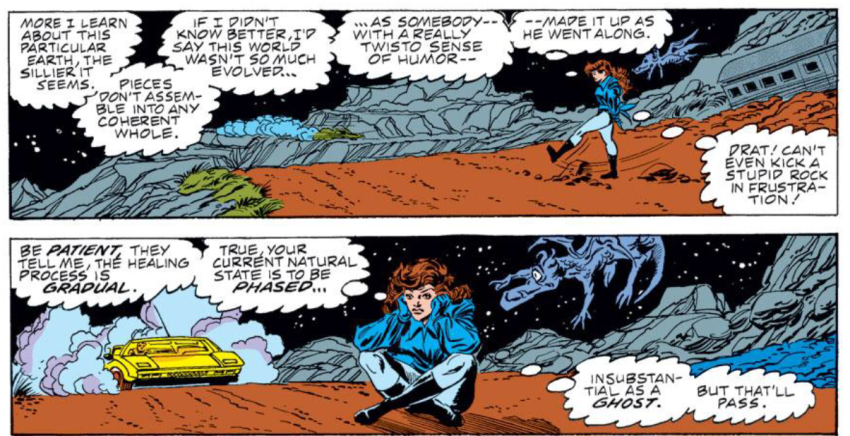 2) Tom Orzechowski is more valuable than I knew. I love Orzechowski’s lettering, and always have. Much like Davis’s art, it’s simultaneously pleasing on the eye, distinct, and so professional as to be pretty much invisible. So when he starts intermittently disappearing from Excalibur as well, it is jarring and distressing and just generally awful to behold. In fact, Excalibur as a whole is as strong an argument for the “Gillen McKelvie” gestalt paradigm of comic book creation as anything. Because of the shifting creative teams (and because of Marvel’s somewhat baffling decision to ship the book bi-weekly at a couple of points), pretty much every permutation of replacements within the Claremont/Davis/Orzechowski triad shows up at some point; my reaction to those makes two things eminently clear: (1) losing any one of those three is damaging to the book, but, somewhat surprisingly, (2) Claremont is the least important of the bunch. 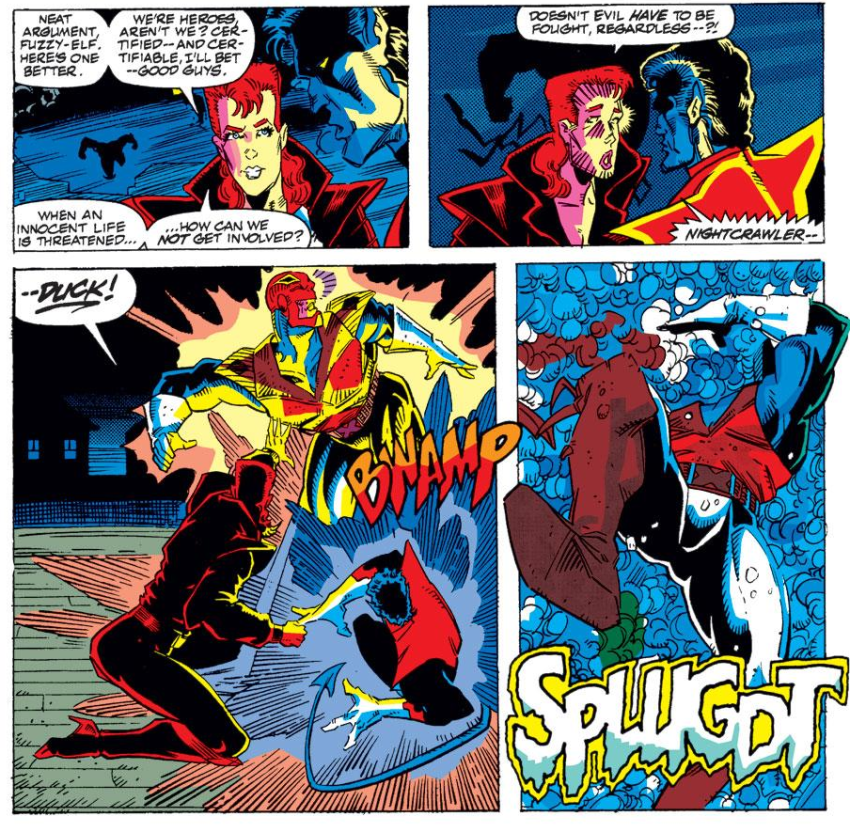 3) Creative team changes directly affect the feel of a book’s “importance”. When a fill-in artist was needed on Claremont’s Uncanny X-Men book, it was almost always positioned as one-time special upgrade — a Barry Windsor-Smith or an Art Adams or, yes, an Alan Davis. I’ve never heard it stated outright, but the implicit message seemed to be, “Look, this is an important book and we’re not just going to give it to whatever hack can churn it out on time.” The replacement creators on Excalibur, by contrast, send the implicit message of “We had no idea we were still publishing this and had to ask random passers-by in Manhattan if they could draw to get it to the finish line.” It makes the book seem inconsequential to the company, which has the direct effect of making me wonder why the hell I’m still spending my own time and/or money on it. 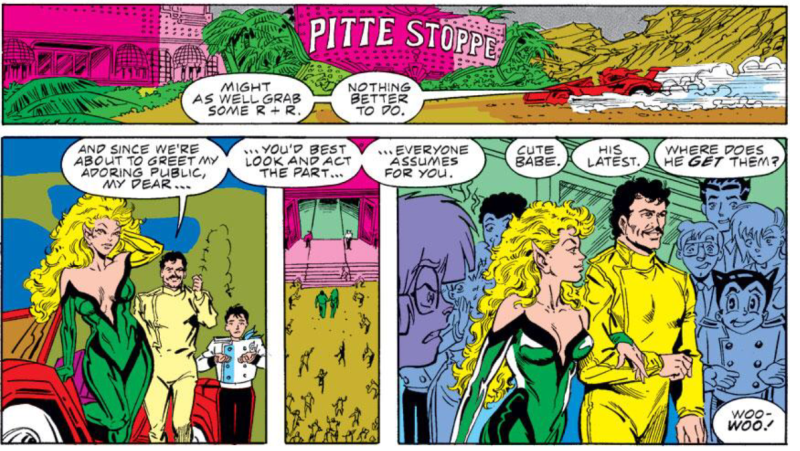 4) The Cross-Time Caper was a terrible idea in theory and in execution. I have no idea what the underlying reasoning behind this storyline is (it’s running concurrent to the similarly peripatetic “Outback era” stories in Uncanny), but it starts in issue #12 as a purported 9-parter and sprawls all the way to issue 24, shedding plots (and creators) as it goes. Its a reality-jumping story, with all the perils of that genre (“Which world will they be pastiching this month???”). It might’ve gotten by on Claremont’s soap operatic tendencies, but shuffling creators paired with a truly baffling proliferation of alternate-universe doubles of characters make it tough to follow who is and/or used to be whom, and why, and who they pine after, and why they’re not together, and so on. Reading back on it now, it’s very very easy for me to see why I lost interest at the time — and, full disclosure, why I frequently found myself drifting away from the book while mindlessly swiping pages today. 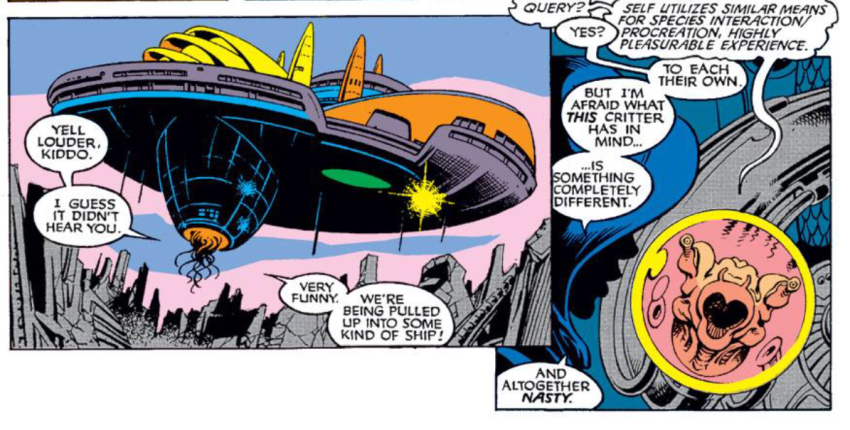 5) That said, Excalibur was a remarkably racy book at times. Maybe the underlying cause of all of the above issues was decreased oversight from Marvel editorial? That would also go a long way toward explaining the surprisingly bawdy sex jokes the book attempts at various points in the run. This is NOT another thing that stopped me from enjoying the book, then or now, but man, does it ever stand out in retrospect. (The alien squid “interaction/procreation” joke up above made me laugh, though, even now.) 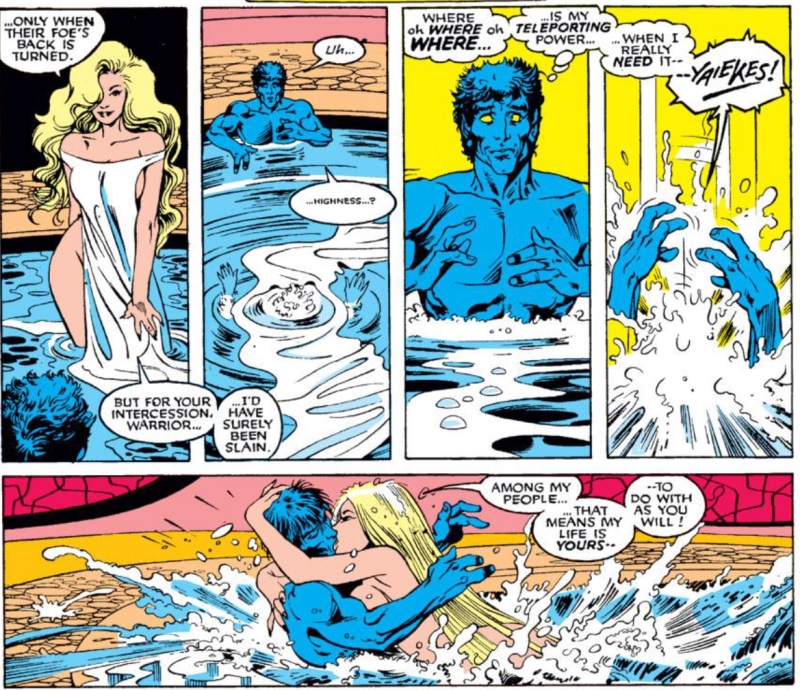 6) Despite that joke’s success, the humor isn’t really as prominent as it seemed to want to be. I’ve always thought of Excalibur as a humorous book– not quite Justice League International level, but definitely more light-hearted than the other X-books on the shelves at the time. That, it turns out, is not exactly accurate. It’s a self-consciously “wacky” book, often a surreal book, and it’s more willing to truck in overt pastiche and homage than Uncanny X-Men was (check out those Judge Dredd knockoffs!), but underneath it’s the same relentlessly depressing grimness that the main line was so known for, all unrequited feelings and barely harnessed powers and what-not. The one character who really impresses in the early issues and appears poised to assert herself in the long haul instead gets disintegrated by her evil other-dimensional counterpart and replaced forever. Comedy gold, I tell you.

On the whole, it’s a book that’s even more disappointing in hindsight, since I don’t even get to have the optimistic charge of thinking the first few issues are going somewhere, and from a certain perspective it serves as a microcosm for what the entire Marvel line goes through around this point in time. I’m hoping that Jay & Miles are going to do their usual excellent job of making these workmanlike comics feel like lost masterpieces, because reading through them by myself, they just feel lost. 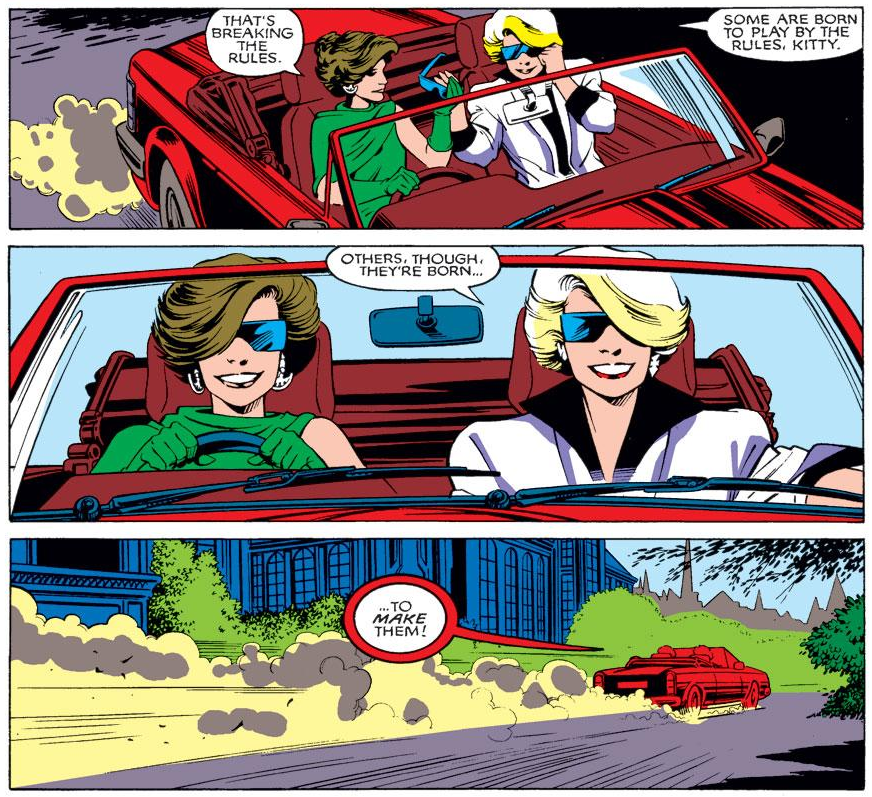 5 comments on “Matt vs. Nostalgia Part 927: Some Old Excalibur Comics”