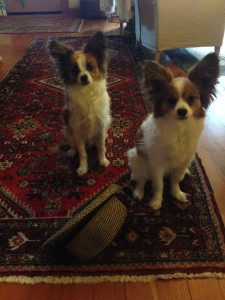 We have winners! We have arguments! We have arguably our most unlikely topic of extended lengthy discussion! More adorable dog pics! Plus: some hasty kinda hasty, but very Youtube-y show notes, and probably a surplus of exclamation points.  All after the jump!

00:00-5:33: Greetings from the post-post-industrial wasteland of Graeme’s basement! Perhaps it’s the Portland heat, or the San Francisco malaise, but you are in one for one heck of a wacky, contentious ride, Whatnaut, and it’s probably best if you either (a) are willing to listen to us talk about that “pop culture” stuff we’re always threatening  to drop into our podcasts; or (b) use the hell out of the time indicator of these show notes to steer to you the comforting shoals of funny book funny talk.
5:33-11:58: But at least on one topic, we are on our game (almost): our 2014 Oily Comics Summer Giveaway! Finally, the winners are announced:  first, the first three fast-fingered fellows who wrote in. Give it up for:

And then comes the two lucky drawing winners, which you can see being picked by Justice Ernie and Judge Gus: 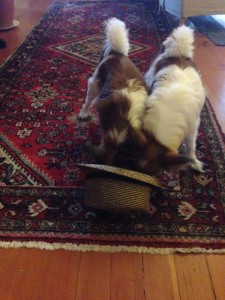 They Are The Law.

Yes, that’s right—the winners were chosen by Graeme’s dogs and we are all well-pleased by the results. Let us all cast envious glances toward:

Again, congratulations! Remember: “Wait, What? The Podcast Where Winners Win!”

11:58-37:40: And so from the sublime to the ridiculous—Jeff has had the song Pipes of Peace stuck in his head, thanks in part to a reference to Ebony and Ivory in an earlier review by Graeme, so now it’s time for MegaMacca: a terrifying wide-ranging conversation that includes Give My Regards to Broad Street; Prince’s Purple Rain; Jeff’s tricky memory, movie runs in the early ‘80s; Rupert the Bear (full video, complete with McCartney’s introduction here, or you can cut to the musical number about 1:17 in here — having heard it now I can testify it is clearly a very deep misunderstanding on Mr. McCartney’s part as to what Liverpool FC would consider an acceptable fight song); Linda McCartney, Angela Lansbury and Murder She Wrote; Macca as Sinistar; Jeff’s obvious delight in knowing that Paul McCartney’s nickname in the U.K. is/was “Macca,” Zardoz (“ZARDOZ!”); and more.
37:40-48:48: This is around the time we stop talking about the Beatles and being “trapped” with a popular band, as opposed to the “freedom” of today’s pop culture, how fragmentary it is and how that may result in less freedom for the artists…and also about Zero #9 by Ales Kot, Tonci Zonjic, and Jordie Bellaire which Graeme has read in advance of release and talks about here.
48:48-49:22: Unfortunately, just as Graeme begins telling Jeff about Mr. Kot’s new Winter Solider series, our Internet connection takes a turn for the glitchy and it takes us a bit of time to get it cleared up.
49:22-51:51: Let’s do it again! Not just a great Bill Cosby-Sidney Poitier movie with Jimmie Walker, it’s also a fine way to start the second part of our podcast. Anyway, we’re back and trying to figure out how Ales Kot will manage to work together the finer points of Zero and the broader points of Secret Avengers into the new Winter Soldier.
51:51-1:04:04: Graeme wants to talk Prince comics, but Jeff wants to talk about how Purple Rain is a pretty decent Marvel comic, an early prototype of the modern superhero movie, if you will. Graeme disagrees, and we go on to disagree about whether Prince’s persona is interesting (actually, I think Jeff ducks Graeme challenging Jeff to say that Prince’s persona is more interesting that his music, and then Graeme wisely goes on to duck Jeff’s points altogether); Prince’s comics; Prince’s twitter; that collection of Belle and Sebastian themed comics; George Harrison doing an album with Mike Skinner; and then—when nobody is paying attention—WE ARE BACK TO TALKING ABOUT PAUL McCARTNEY AND THAT GOD-DAMNED PIPES OF PEACE VIDEO.
1:04:04-1:16:08: Graeme tries to save the podcast by talking about something other than Paul McCartney—namely, pre-SDCC comic book news. Jeff is not sure if this will work but gives it a shot. Finally, we are back on familiar Wait, What? territory! Topics include: Boom!’s pre-SDCC news; prequel comics; DC’s announcements; the new Batgirl title by Cameron Stewart, Brenden Fletcher, Babs Tarr, and Jordan Bellaire; Ann Nocenti on Klarion the Witchboy; The New Adventures of Old Lobo; and Tony S. Daniel on Deathstroke the Terminator.  (yesss!!)
1:16:08-1:42:31: And in Round 2 of Shouty and Cantankerous, Graeme and Jeff discuss Jeff’s recent post raking any number of free comics from Comixology over the coals using reasoning that runs the gamut from flimsy to specious. Also discussed: why Jeff hates everything; why Jeff is wrong about Letter 44; why Jeff is wrong about hating everything; what is wrong with Jeff; why is Jeff incapable of feeling joy; seriously, Jeff, what is wrong with you, Jeff. Oh, and also, Graeme reaching through the screen and slapping Jeff.

But also, more importantly—art with a point of view: is there not something to be said for raising a point, then letting a reader take it further themselves? I mean, clearly, there is. Raising a point of view and then hammering home how the artist feels about it leads us down the road of dull propaganda, terrible self-serving work, and, worst of all, The Newsroom by Aaron Sorkin. So…what’s wrong with Jeff?

Also discussed: Jason and Werewolves of Montpellier; the joys of being perfectly cromulent; and a lot, lot more. We should all appreciate Graeme McMillan’s patience and good will here (I certainly do!), because he not only listens to a crazy, swerving monologue from Jeff, he also asks: “So what do you like these days, Jeff?” Also discussed: Jiro Hurawata’s Batman, now on Comixology; Chris Weston on Judge Dredd; and Southern Bastards #3.
1:42:31-1:53:17: We also talk about Shutter #3 and #4 by Joe Keatinge and Leila Del Duca. Jeff thought issue #3 was enjoyable and quite strong; Graeme thought issue #3 was stronger than #2 but also decided the book is not for him. Also discussed: District 9, District 12 from The Hunger Games; District [or Banlieue] 13, and District 14 by Pierre Gabus and Romauld Reutimann , and how the number of titles called District [Number] is a bit overly confusing.
1:53:17-1:56:06: Jeff asks Graeme if he’s read Infinity Man and the Forever People #2 (Graeme has not); Graeme asks Jeff if he’s read The Life After by Joshua Hale Fialkov and Gabo (Jeff hasn’t). We each talk about these books for a bit.
1:56:06-1:59:51: after his excessive biovating about the search for meaning in his comics, Jeff takes a tip from John Kane and picks up the long-lasting chewing pleasure that is SpongeBob Comics Annual-Size Super-Giant Swimtacular #2. A beautiful Fletcher Hanks parody by Paul Karasik and R. Sikoryak is only the capper of this handful of terrific comics. 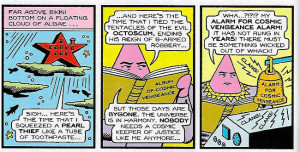 This was so great, you guys.

1:59:51-2:21:34: Oh, god. Graeme has three quick things to talk about and Jeff unfortunately goes off another (another!) tirade! Will it be over (a) The Wicked and Divine, by Kieron Gillen and Jamie McKelvie (of which Graeme has seen issue #2 in advance)? (b) Meteor Men, by Jeff Parker and Sandy Jarrell (an advance copy of which Graeme has seen)? or (c) I Was The Cat, by Paul Tobin and Ben Dewey (an advance copy of which — surprise, surprise — Graeme has also seen)? Instead of wrapping up neatly at the two hour mark, we tussle for another twenty minutes.
2:21:34-end: closing comments! A taste of next episode’s Avengers conversation as Graeme McMillan gives us a preview of our Avengers discussion from next issue.

I’ve heard y’all like to have a handy link to download from.  It is below, and the player should be…above?  And the whole thing is on our RSS feed, so….you should be set?

Keep an eye out for posts from Graeme and I this week (and next week), look for us on Twitter, drop us a note, think about throwing money at us on Patreon if you like what we do.  And from the bottom of Graeme’s heart and whatever the strange lumpy tumor that is mine, we thank you for listening and for your support, and we hope you enjoy!