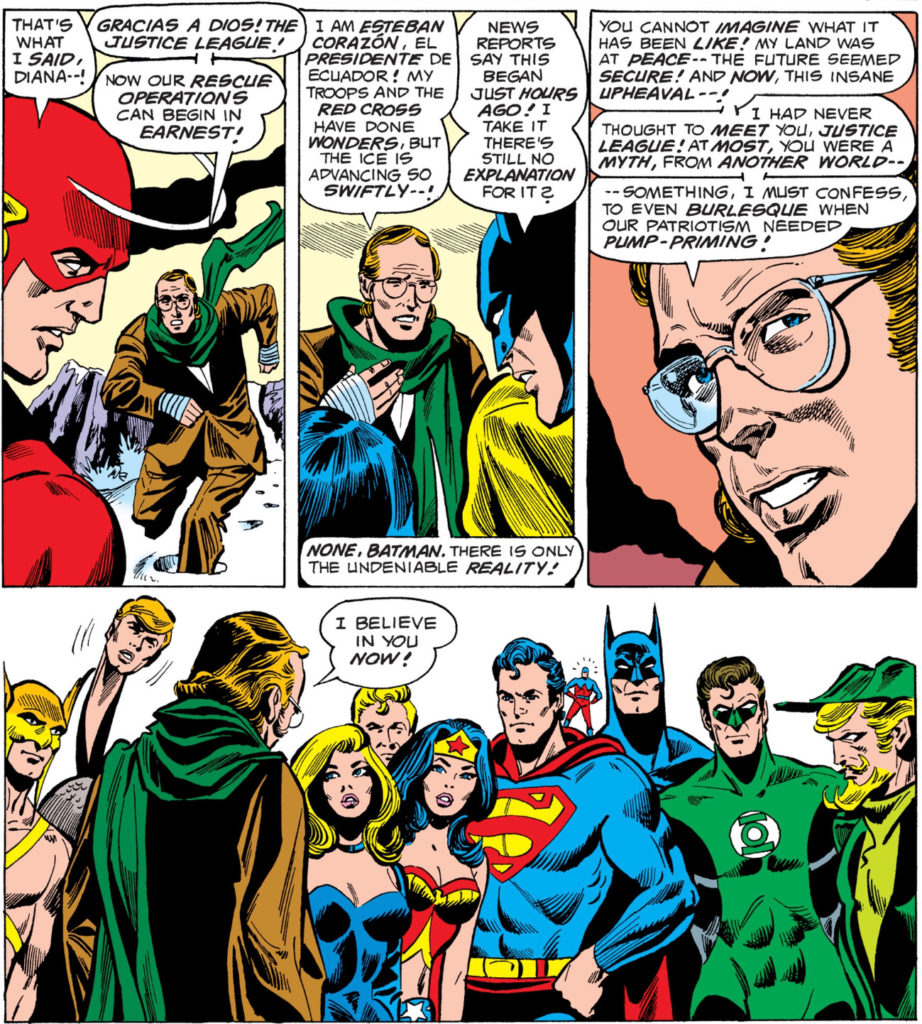 0:01-02:07:  Greetings from Graeme “Oh My Stars & Garters” McMillan and Jeff “Oh My God, Oh My God, Oh My God” Lester! Our intro is a bit different than usual because instead of diving right in to talking to each other, we instead take a moment to explain about how we are and what we do.  Is this our attempt to be more inclusive to new listeners?  Heck, no!  It’s our attempt to be more inclusive to our special guest, Mr. Steve Englehart!  The writer, raconteur, and mastermind behind dozens of classic stories helps us celebrate Wait, What’s tenth anniversary by joining us for a nearly two hour chat.  So without further ado… 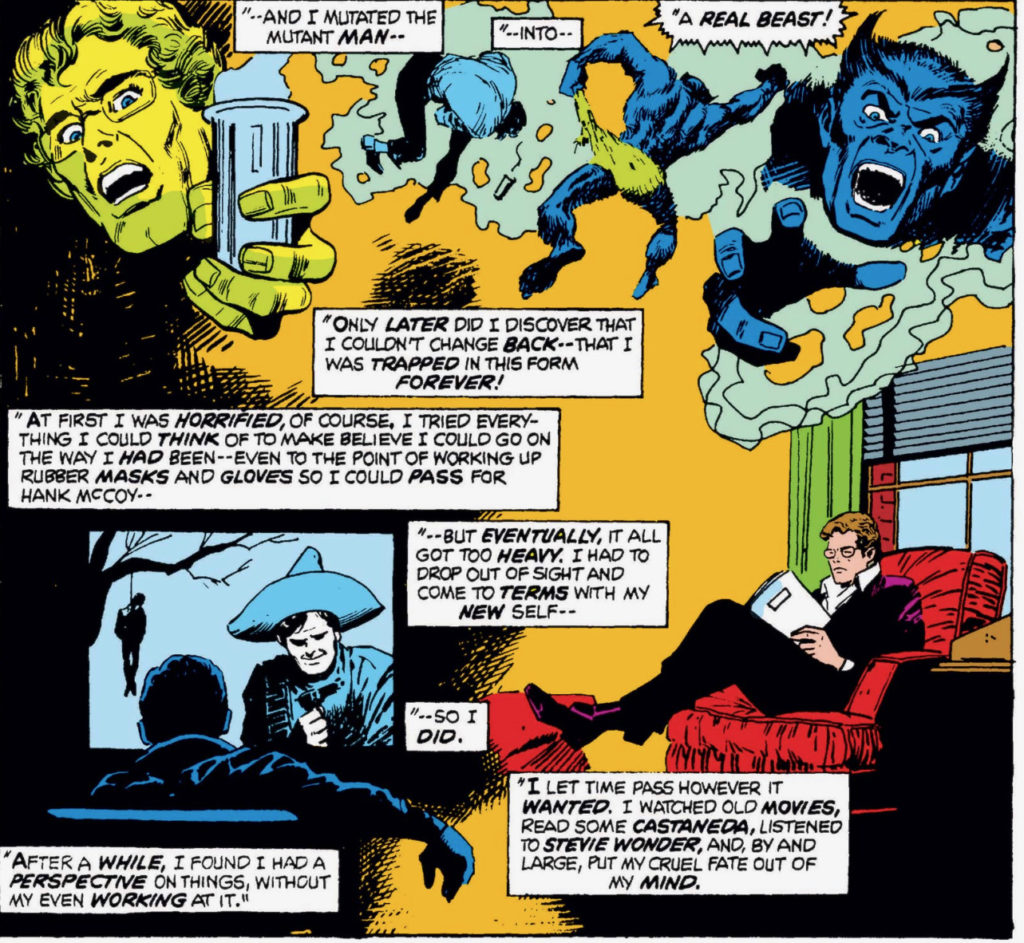 2:07-20:19:  Graeme kicks off the questioning by asking about SE’s entrance into the comics industry—one of our very favorite comics writers started off as an artist.  How and when did that change? Discussed:  the first Marvel story SE wrote; The Beast’s series in Amazing Adventures (issues #12-17); confidence; working Marvel method vs. full script; working on Detective Comics; working with artists who won’t draw your plot; and more. 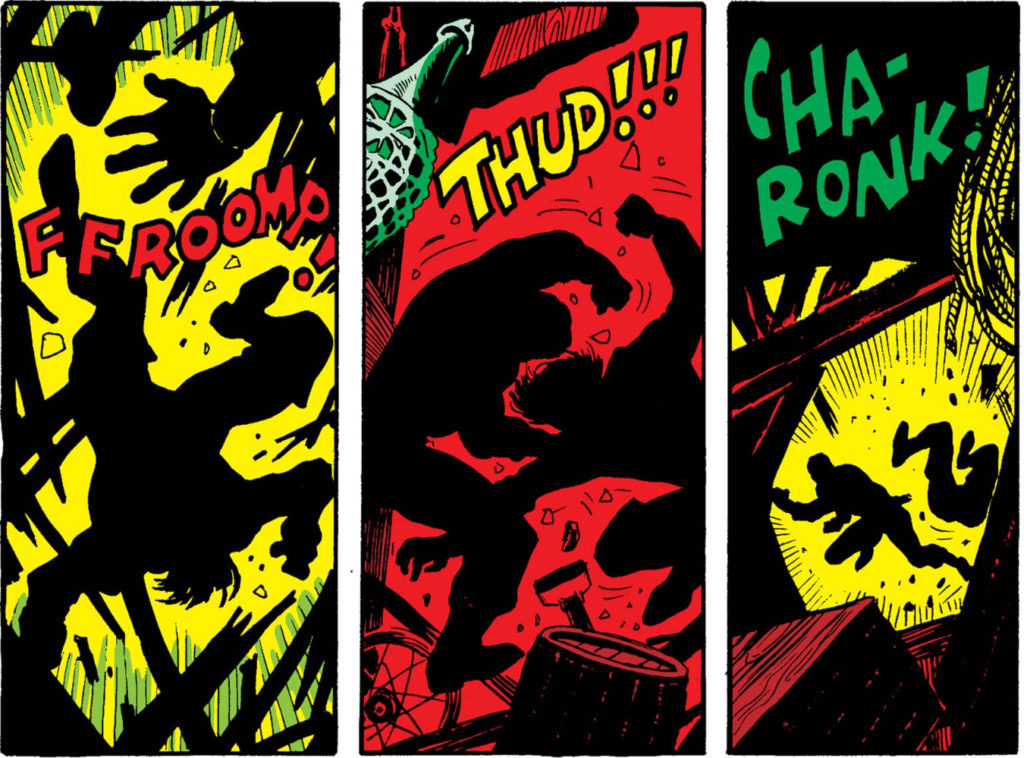 20:19-24:35: Speaking a bit more about the Marvel method, Jeff asks if the method as Englehart’s preferred working was aided by some of the very tight collaborations with artists and friends in the early days of SE’s career:  Discussed:  working with Frank Brunner, Jim Starlin, and Al Milgrom on Captain Marvel and West Coast Avengers.

24:35-40:29: Graeme asks about how the early days of Englehart’s career—where he was living the dream of working alongside friends in the The Bullpen—contrasted with his return to working on comics in the Eighties. Did he see the change in the comics industry happening toward what it would become when he came back?  Discussed:  the shadowban of the word supervillain; Shooter vs. DeFalco; the end of the Marvel age and the end of Englehart’s run on the Fantastic Four; Jeff’s melodramatic RL fanfic; and more. 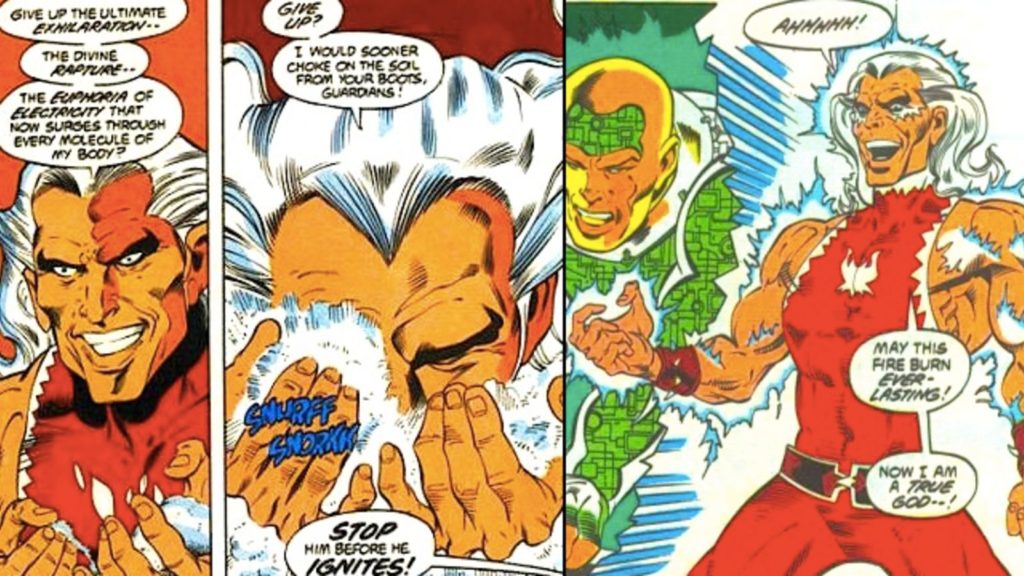 40:29-55:36: I think everyone should give Graeme McMillan so many kudos for managing to hold out for forty full minutes before asking about The New Guardians!  (To be fair to Graeme, it is a brilliant tie-in to talking about the end of Englehart’s work at Marvel because the New Guardians represented the end of his work at DC.  Discussed:  sex, drugs, and rock & roll; Snowflame!; devil’s advocate, devil’s devil’s advocate, and devil’s devil’s devil’s advocate with mention of storylines in Green Lantern Corps and West Coast Avengers; Coyote as a comic outside the Comics Code that takes its cues from Englehart experiencing freedom as a novelist; crafting stories with recognizable characters inside and outside the Comics Code; using the X-Men during their lost era; and more.
55:36-1:08:38: Graeme has an “entirely random” question for Steve: “How did you get involved in video games?”  Discussed: an epiphany via Dick Giordano; Ted Richards and Dopin’ Dan; writing for video games; The Tribe project at Atari (in the early 2000s) and Games.com; 21st Century pop culture; and more. 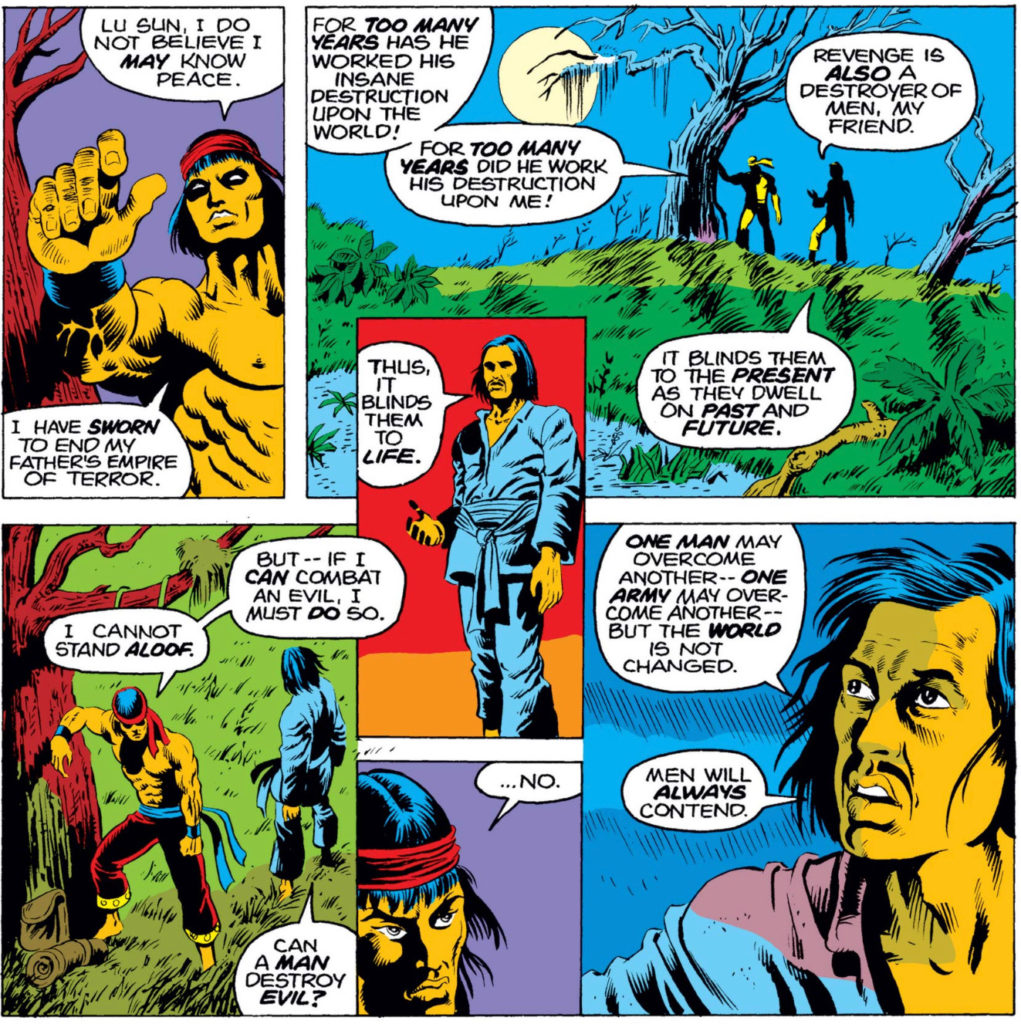 1:08:38-1:32:34:  They’re doing a Shang-Chi movie (as we’re all aware)!  That must be an odd and amazing feeling for SE, right? Discussed: Starlord; royalties and revenue streams and Marvel//Disney vs. DC; looking for movies and TV licensing with the self-owned properties; having readers and instant feedback for your work; a deep cut question about the letters page of Captain America #148, and a question (or two) about comic continuity and whether it has a limited shelf life; The Malibu Ultraverse and why those characters and stories have not returned despite some initial plans;  and more. 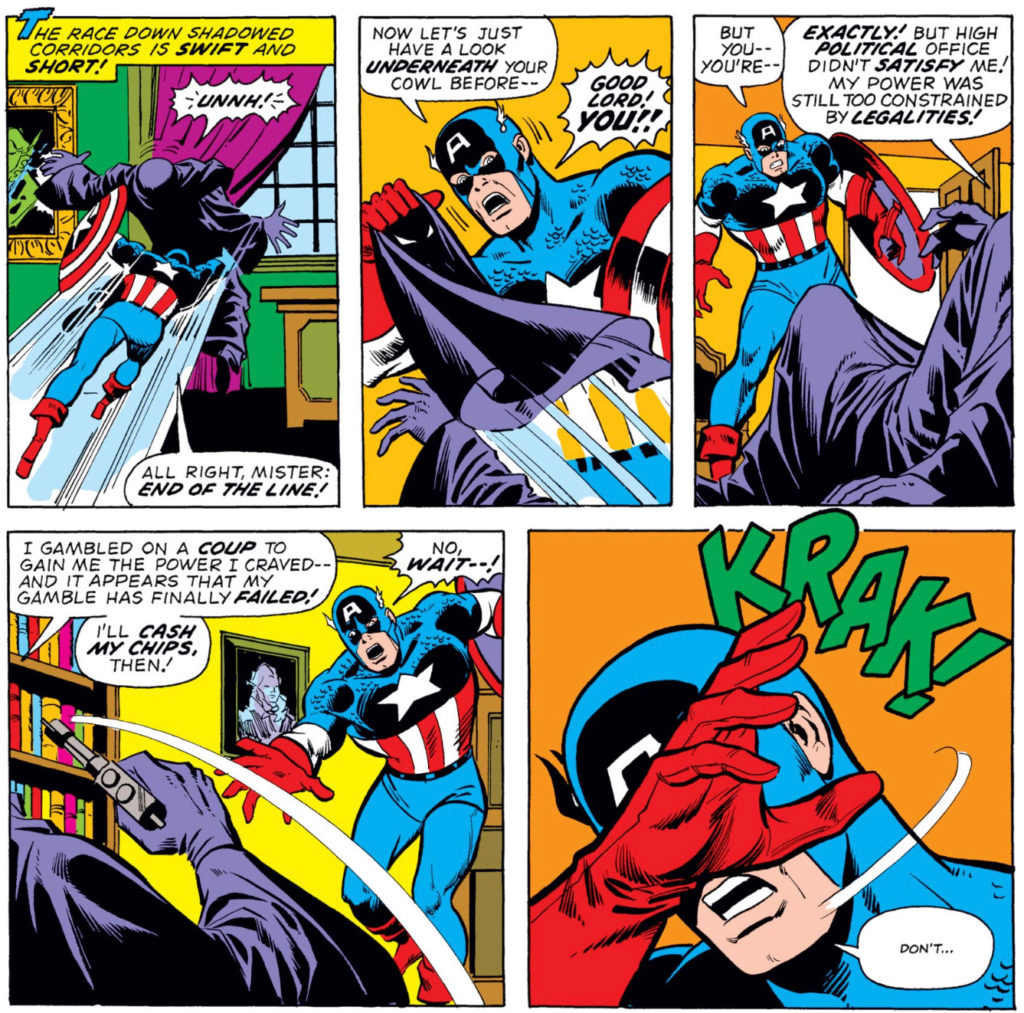 1:32:34-1:50:03: Could Steve see himself working for Marvel again? Or DC?  The answers may surprise you!  (By which I mean: Jeff.  It definitely surprised Jeff.)  Also discussed: Hollywood’s interest in making comic book movies; the difficulty of doing that well; the reinvention of Batman (again!); comics as a collaborative force; favorite comic book artists; the Buscema brothers; and more.

1:50:03-end:  “Do you still love superheroes.  Do you still read comics?” Jeff apologizes (a lot!) and we thank Steve Englehart (hopefully even more?) for joining us. Instead of our regular closing comments, we had to just go recline on the divan and recover.  (So much so, that next week is a skip week—we will return in two weeks with a new episode of Drokk!!)  But I will say here that you can look for us on  Stitcher! Itunes! Instagram! Twitter together and separately: Graeme and Jeff! Matt! Tumblr, and  on Patreon where a wonderful group of people make this all possible, including Empress Audrey, Queen of the Galaxy, to whom we are especially grateful for her continuing support of this podcast.  (Also, don’t forget about Spotify!)
Next week:  Skip week, as we’ll be recovering.  But join us in two weeks for the seventh episode of Drokk!!