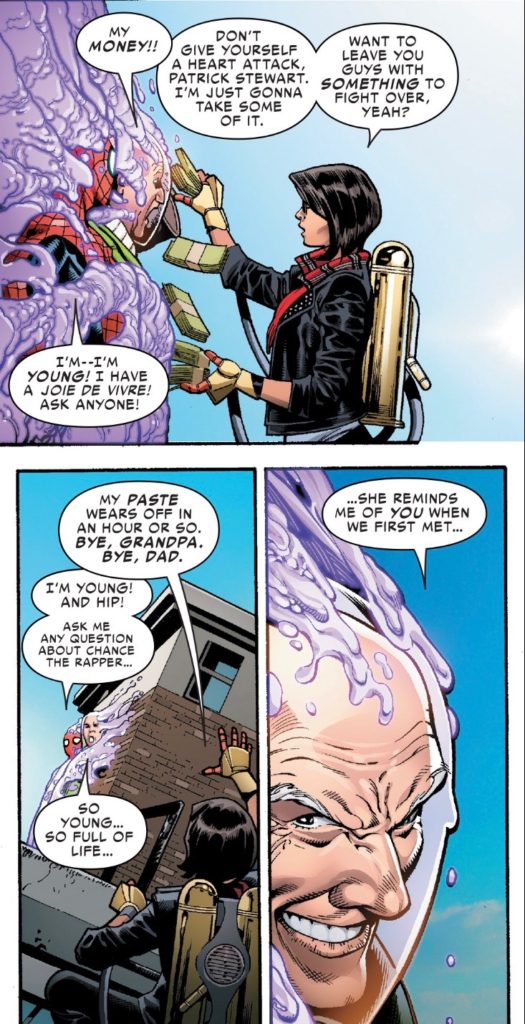 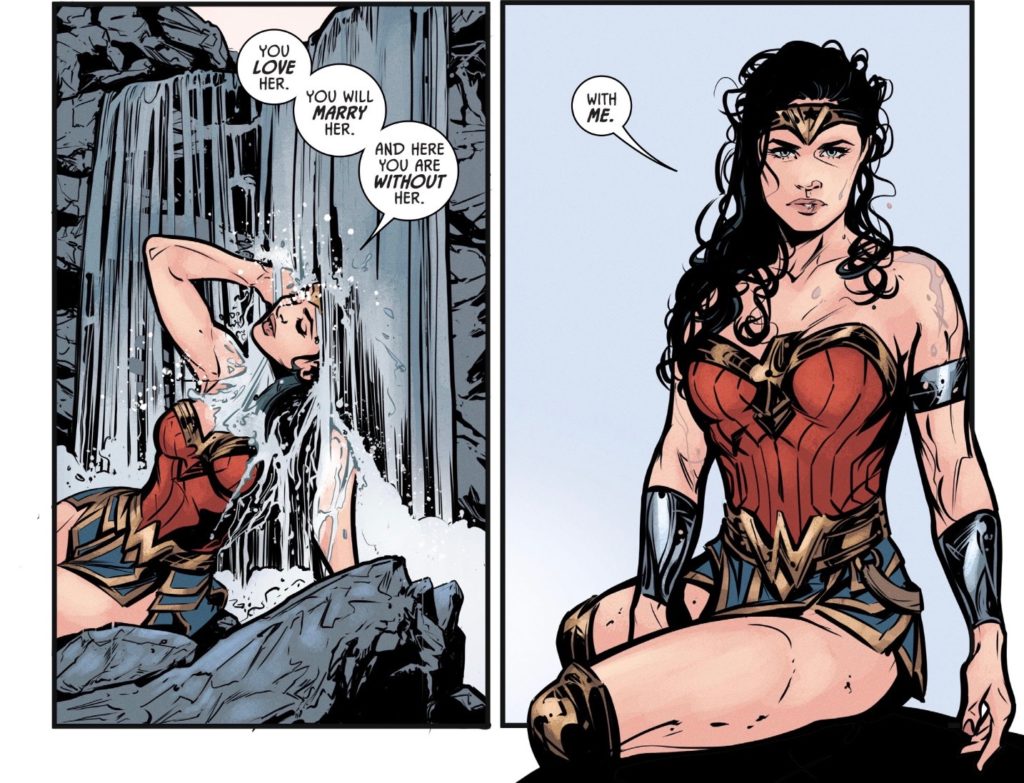 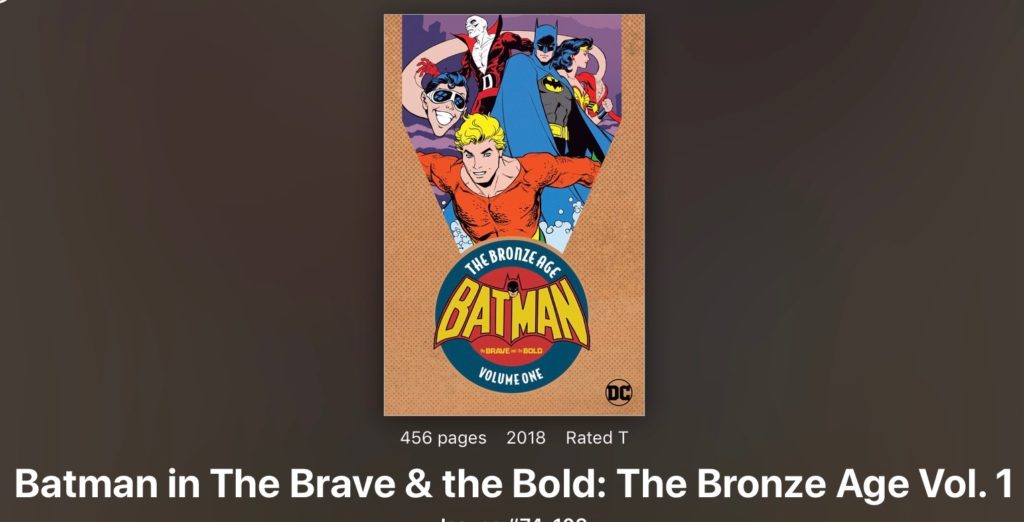 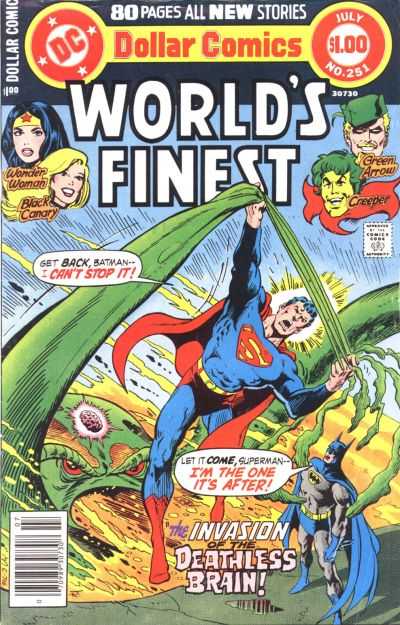 Here’s episode two hundred and thirty-nine for your yuletide ears!  Due to some tech problems, the episode ran short (and turned out to be even shorter once you cut out the “Hello, Graeme, hello?” “Jeff?” “Graeme?” “Hello?” joshery).  Nevertheless, it is our hope we will scratch that hard-to-reach comic book podcast itch.

Our statement about the upcoming changes to Patreon’s fee structure;
*Jeff’s epitaph;
*An annotated readthrough of the lead story of World’s Finest #251, “Invasion of the Deathless Brain,” by Bob Haney, George Tuska, and Vince Colletta (oh, and good catch by Walter!  Here’s that amazing fan-drawn facial hair on Speedy below); 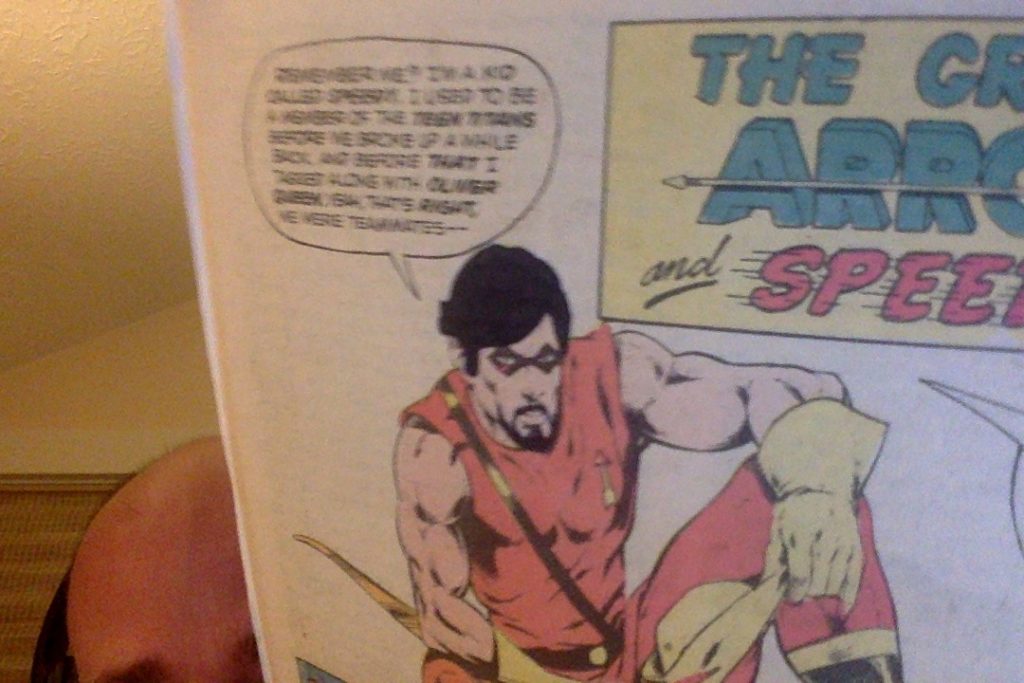 *The roundtable by Matt and Graeme about Justice League #34 by Priest and Pete Woods, and Batman #36 by Tom King, Clay and Seth Mann, with some additional commentary here by Jeff;
*But Jeff also read and wanted to talk about three kinda recent first issues: John Wick #1 by Greg Pak, Giovanni Valletta, David Curiel and Inlight Studios; Fence #1 by C.S. Pascat, Johanna The Mad, Joana LaFuente; Ninja-K #1 by Christos Gage, Tomás Giorello, and Diego Rodriguez; and the (not a first issue by super-excellent) Rock Candy Mountain #6 by Kyle Starks, Chris Schweizer, and Dylan Todd.
Also:
*The 2000AD 2017 Christmas Special;
*Be Pure! Be Vigilant! Behave! 2000AD and Judge Dredd: The Secret History… by Pat Mills;
*The 2000AD Sale currently on their website (update: and thanks to editing this episode, Jeff now also has a digital copy of the Complete Harlem Heroes);
and more!

We will return in two weeks for the last Baxter Building of the year!  Read Fantastic Four #s 322-327 and come join us! 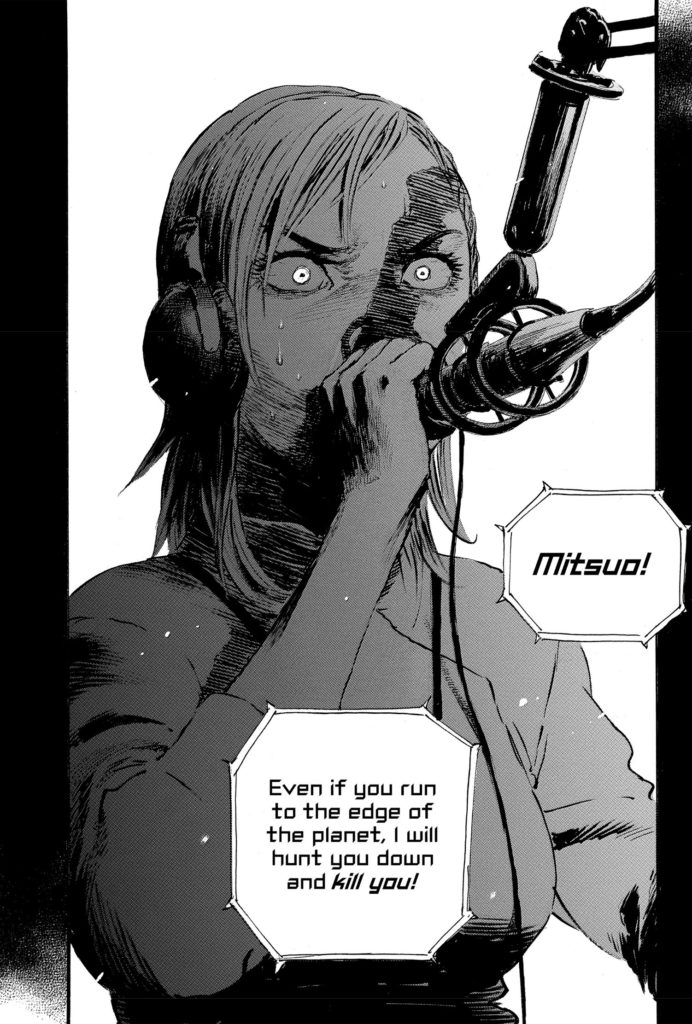 0:00-18:02: Greetings from Graeme McMillan and Jeff Lester!  It’s only a few seconds in when Graeme says, “Welcome to the Mellow Wait, What? Hour,” and although he’s only riffing on Jeff’s low-key opening…he’s kind of on the money!  (Although, y’know, not an hour, of course.)  Yes, *un*-strap your seatbelts as two semi-overworked dudes let down what’s left of their hair to talk comics with a certain je ne sais atténué.  We move quickly on to talk about the world of comics news, but there is a certain indolence there as well because, as Graeme puts it, “a lot of people are, to be honest, shitting themselves before San Diego.”  Discussed: supporting examples; the few announcements that have popped up, the lack of even embargoed news for Graeme to have up his sleeve; Previews Night; a thought experiment about what might have happened if DC had tried to do a prequel to Watchmen; and what happened to bookstore sales of Wonder Woman after being the biggest movie of the summer; and more.
18:02-29:27: By the way, if you’re Dan Coyle—and hopefully that is only applicable to one person and there’s not a small army of people using that monicker to snark at us in our website’s comments—our discussion of a conspiracy theory about Marvel’s role in keeping Wonder Woman from making any of the sales charts on Amazon leads to us both explicitly agreeing: Yes! Yes, we will talk about John Byrne’s run on Star Brand!  And then us being us, we go on to talk a bit about our memories of John Byrne’s Star Brand, the end of the New Universe (and Graeme being Graeme, he admits to having already just read what he’s just agreed to read), a sly serving of three way mid-80s beef, and more. But first! We talk a bit about digital buffet fatigue, the reduction of prices in the 2000AD online store (which Jeff can’t even think about too much or he will lose his mind and most of his most recent paycheck), and other sundries.  If you haven’t gotten the sense this is an even more meandering episode than usual, dear Whatnaut, hopefully the fact I just talked about stuff I remember us discussing before it even actually got mentioned in the logical order you would expect it in should give you a clue. 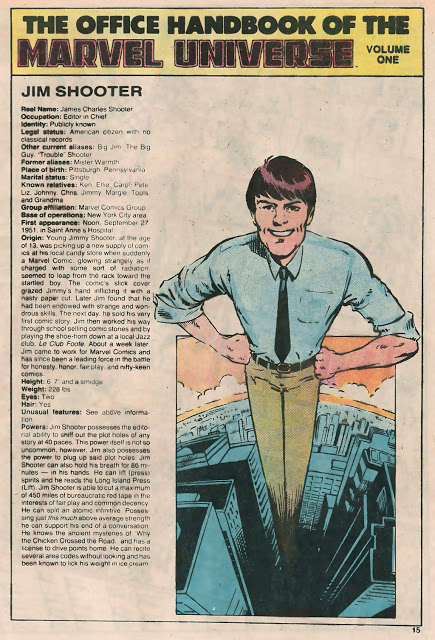 29:27-41:57: And here’s another clue: “Oh man, Official Handbook of the Marvel Universe,” Graeme sighs,” what did you do to me?”  If you think that means we are going to tread on the edges of sacred House to Astonish ground and discuss both the Handbook and Who’s Who in the DCU, give yourself a cigar! A thirty-plus year old cigar! One inked by Josef Rubenstein! And then was pressed in a Tuska-era issue of Superboy and the Legion of Super-Heroes! (Don’t worry, it will all make sense if you listen.) 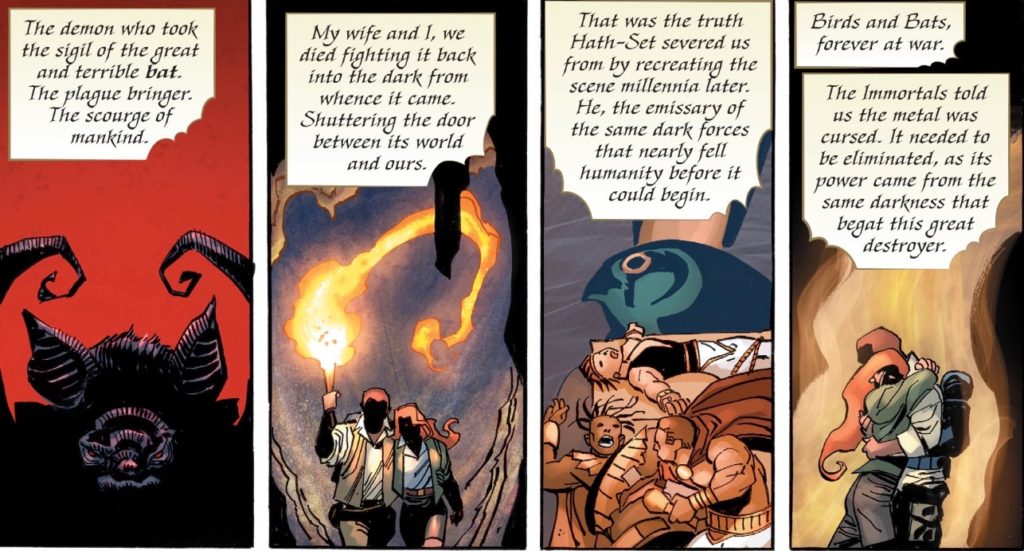 41:57-58:12: “Ah, Graeme, do you want to talk about recent comics that you’ve read?” Graeme admits (not entirely accurately, as it will turn out) the only recent comics he’s read is Dark Days: The Casting by Scott Snyder, James Tynion IV, Jim Lee, Andy Kubert, John Romita, Jr., Scott Williams, Klaus Janson, and Danny Miki (with Alex Sinclair and Jeremiah Skipper on colors)!  But should you be surprised when talk turns to which Super Powers action figures and which Secret Wars action figures each of us had? Probably not, no.
58:12-1:01:21: Want to hear Graeme recap the amazing “City of the Damned” storyline from Judge Dredd The Complete Case Files, Vol. 8?  If not, skip the section but hoo boy you will be missing out.  I *really* want to read this storyline now! 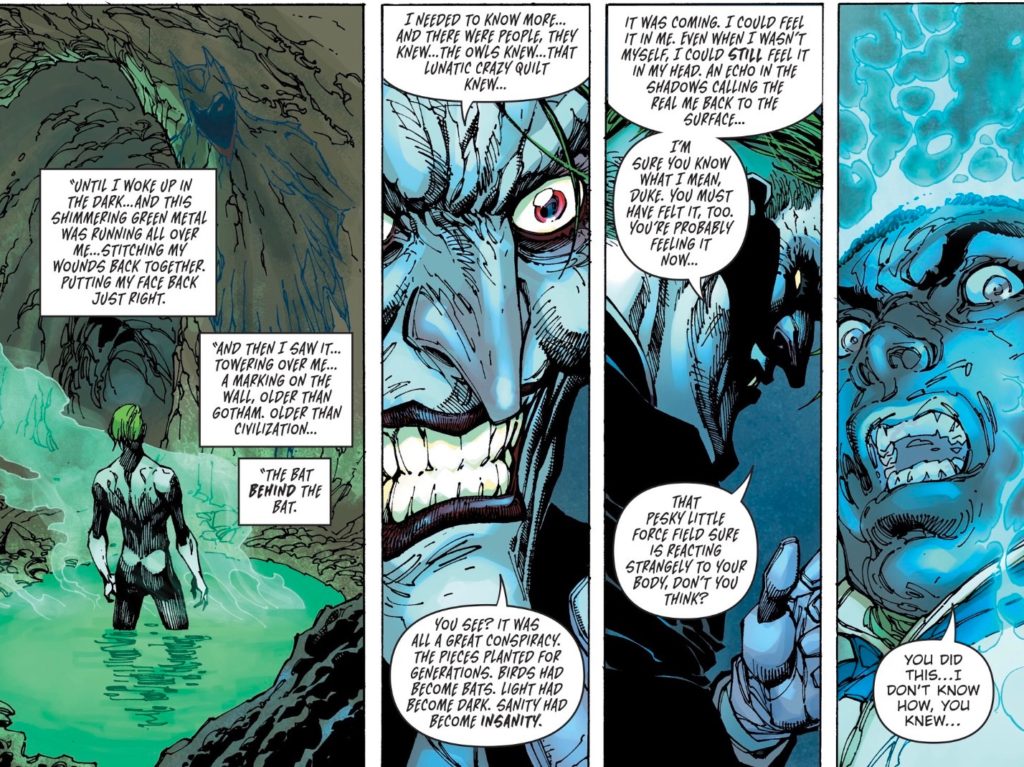 1:06:57-2:01:02: And then Jeff wants to blab about the other recent comics he’s read because he thinks—possibly quite mistakenly—that would be something the listeners to this podcast might want to hear about:  Discussed:  Rocket #3 by Al Ewing and Adam Gorham; Suicide Squad #21 by Rob Williams and Gus Vasquez; Deathstroke #21 by Christopher Priest, Diogenes Neves, and Jason Paz; Batman #25 and #26 by Tom King and Mikel Janin;  Chilling Adventures of Sabrina #7 by Roberto Aguirre-Sacasa and Robert Hack, which leads to a very long discussion/disagreement between Graeme and Jeff about who would be on a list of the best-selling/most reliable creators of the current generation of Image creators, with a lot of Graeme looking up sales figures and dates; Kill or Be Killed #10 by Brubaker and Phillips (and Elizabeth Breitweiser!); Rock Candy Mountain #4 (so good!) by Kyle Starks and part of an ongoing underlying conversation across these titles—why aren’t more good comics discussed as they go along? Are we *all* addicted to dissecting the next new thing? 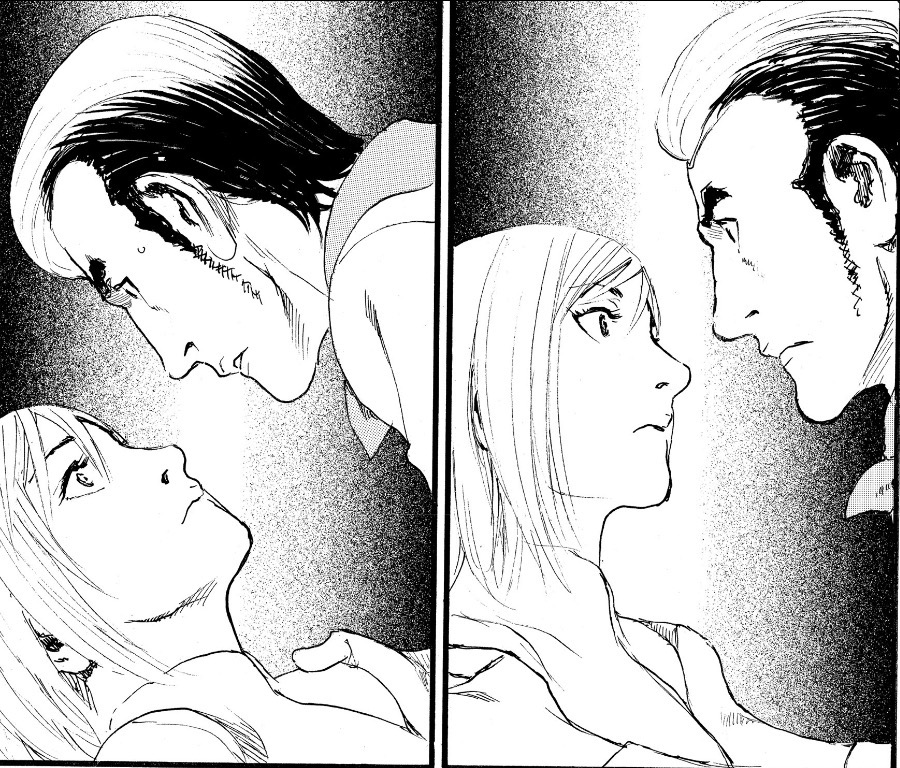 2:01:02-2:08:11: Also read by Jeff: Motor Girl #1 by Terry Moore (“as if Greg Rucka was writing Angel & The Ape?” Well, kinda!); Wave, Listen To Me!, Vol. 1 by Hiroaki Samura; and some preliminary comments on Manga Poverty by Sato Shuho (translated by Dan Luffey).
2:08:11-2:22:15: Closing comments? No, not quite! Jeff wanted to correct an earlier misstatement of his from a few weeks back when he said that all episodes of Wait, What? are currently available on iTunes.  Turns out iTunes’ podcast lists top out at 300 so…happy tricentennial to us?  And also, though we tried to avoid doing our quickly-becoming-a-standard-shtick of complaing about Marvel: you guys did you see that damn t-shirt variant cover thing? What the hell?!
2:22:15-end: “I have, I’ve got to admit, really enjoyed this meandering episode,” announces Graeme.  “Because it really is so close to San Diego that this is exactly where my mind is at right now.” And with that—after some debate as to when we will return (spoilers: three weeks!), we move to..closing comments! Look for us on  Stitcher! Itunes! Twitter together and separately: Graeme and Jeff! Matt! Tumblr,  and  on Patreon where a wonderful group of people make this all possible, including the kind crew at American Ninth Art Studios and Empress Audrey, Queen of the Galaxy, to whom we are especially grateful for their continuing support of this podcast.
In Three Weeks:  Wait, What?, Ep. 230 (or three hundred and something, but who’s counting?) Have a nice little summer break and come back and join us here in August! 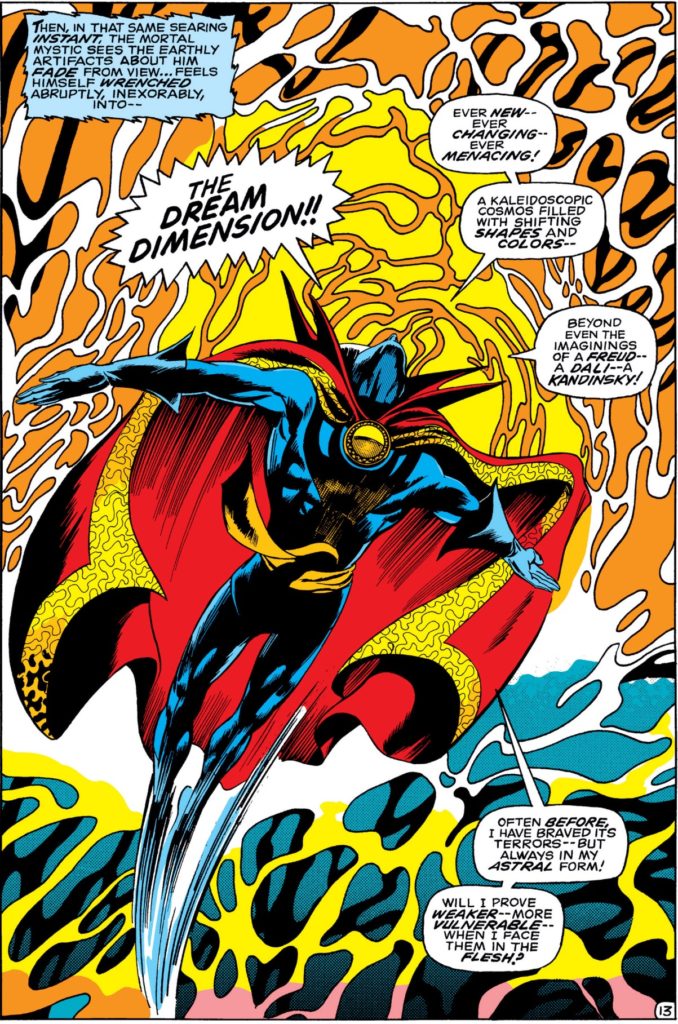